After a long and tiring flight, Benjamin and I made it safely to our new home. We've been working non-stop (except for nap time) ever since (at least until yesterday when we took a little time out to play).  The girls were more excited to see me than I thought they would be since they didn't seem too distraught over me not moving out there with them. They were waiting for me at the airport with Grandma and ran up to give hugs and kisses to both me and Benjamin before checking the diaper bag for snacks. I was more important to them than snacks. That's a huge deal. 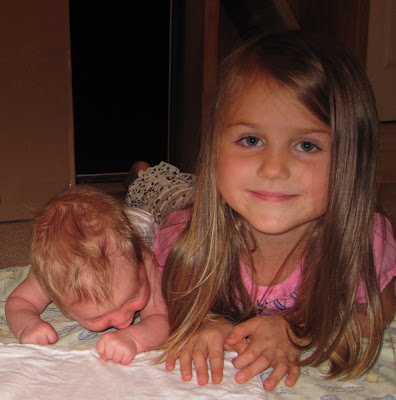 They've loved having Benjamin around and he's loved being around them. They talk and sing to him and sometimes they even manage to play together nicely, too, so that they're all kept entertained while the grown ups are working. 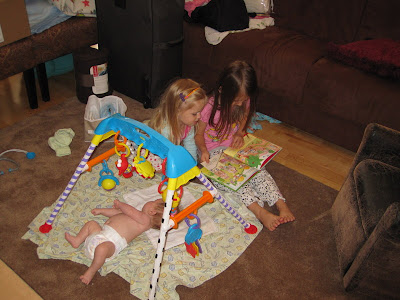 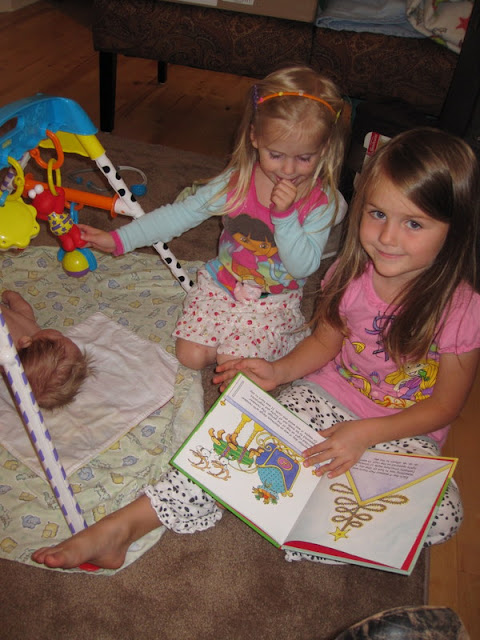 So far I've only met one of our neighbours—she ran over some pumpkin bread (most delicious) and some books for the girls to help keep them entertained. She also apologized for not bringing her girls over for introductions (but they're just getting over a cold that she didn't want to share with us). She said they were praying so hard for a young family with small children to move in, which totally worked out for us because we were hoping for neighbours with small children. They have three girls, a seven year old, a five year old (just like Rachel), and a two year old (who will turn three in October, just like Miriam)! God must love us very much to answer our prayers so perfectly. Our neighbour mentioned that there were two other families on our street who also have small children. We're excited about that!

We finally got our pool key on Tuesday. I say finally not because I was impatiently waiting for the key (since Tuesday was my first full day here) but because Rachel and Miriam had been impatiently waiting for the pool key. I took them swimming yesterday afternoon. I drove them to the pool even though it's close enough to walk to because I need more driving practice and because we left Benjamin sleeping at home with Grandma and because we were in somewhat of a time crunch and because it looked like it was going to rain.

The pool was all ours, which was nice because that meant the parking lot was empty. Still, it took me three tries before I parked between the lines. The girls cheered when I finally turned off the car.

"You did it, Mom!" Rachel beamed proudly.

Later when Grandma asked how I did she said, "Well, she can't park!" so that might have been false adulation but I'll take what I can get.

We checked out the kiddie pool first. Miriam told the lady at the desk that she wanted to swim in the "cat pool" and the lady gave her a look that said "you're cute but crazy." The girls liked it but soon got bored so we went to the big pool, which was a little colder but still pleasant. 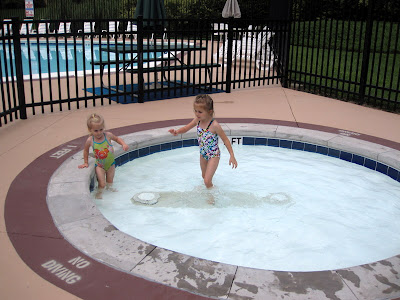 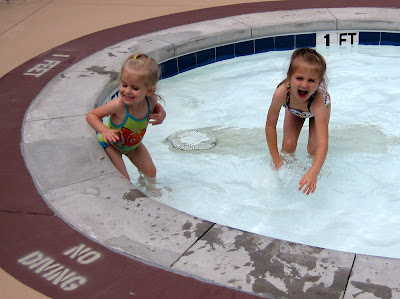 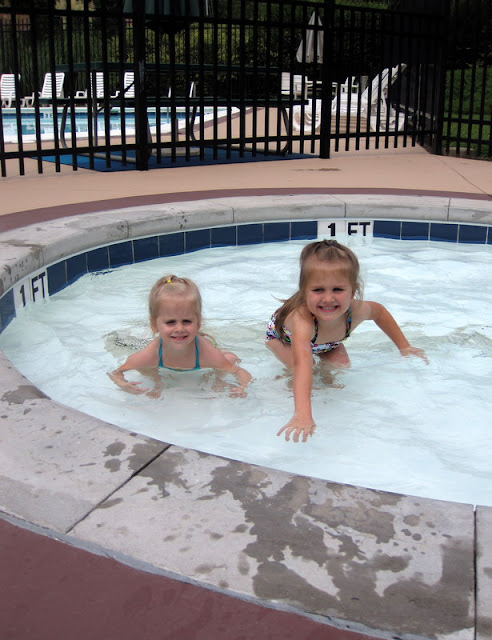 We were so wiped out after we got home that Miriam and I took a two-hour nap (which Benjamin, surprisingly, cooperated with—of course, I can usually get him to sleep for a long stretch...if I'm holding him...which I was) while Rachel watched a show...or two...or three.

I didn't wake up until 5:00 so we had to rush to get ready for the ball game. Durham has a minor league team—the Bulls—and it's kind of a big thing. As part of his orientation fun we got tickets to the party deck for a private buffet (though they served hot dogs because it was a baseball game; I'm not sure you can call it a buffet if all they serve is hot dogs) and a view of the game.

The girls were so excited to go that they put their BYU shirts on. Because if you go to a sporting event you should probably wear your BYU shirts, right? *sigh* I told them that it wasn't a BYU game but they insisted on wearing them, my little sports enthusiasts. 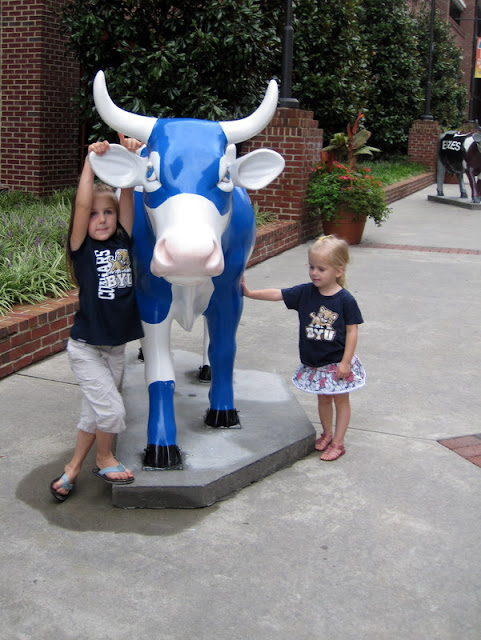 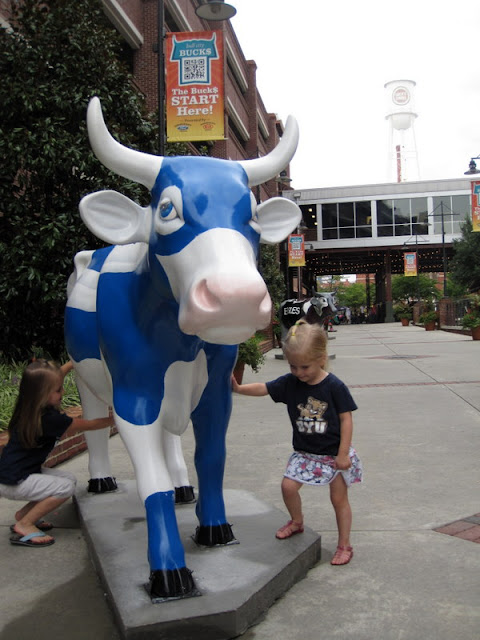 The stadium is in a revitalized downtown district, surrounded by the remains of a defunct tobacco* industry. Some of the plants are still up and running, of course, but many of the buildings have been put to other uses—we saw a furniture shop and an art institute and several restaurants housed in old tobacco factories. *Every time I try to type tobacco I type tomato. I'm not sure why.

Here you can see the famous (is it famous? Andrew said it was) Lucky Strike water tower in the background: 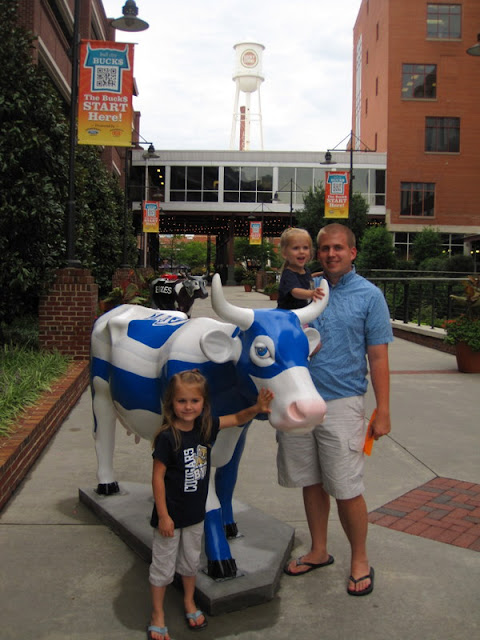 Andrew and I had mixed emotions about putting on our wrist bands—we haven't worn a wrist band for fun for a long time (we spent all summer wearing NICU bands) that we felt a little guilty about wearing the colours of the NICU, so to speak, while we were actually out having fun, but we soon got over that...like in a couple of seconds. It was more like being washed over with emotion than anything else. NICUs do weird things to people.

We enjoyed talking with the few people we spoke with. There are only four people in Andrew's cohort. The rest of the people there were master's degree students and we're so far above them too introverted to get to know them. Besides, Rachel and Miriam were super interested in watching baseball, which I found surprising because...baseball. 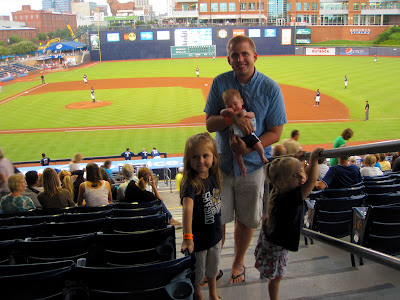 Andrew dutifully explained the rules of the game to Rachel (and to me when I asked—for example, you can't strike out with a foul ball? I didn't know that!) and they watched the game with rapt attention even though it was 0-0 until the sixth inning. That's right: 0-0. 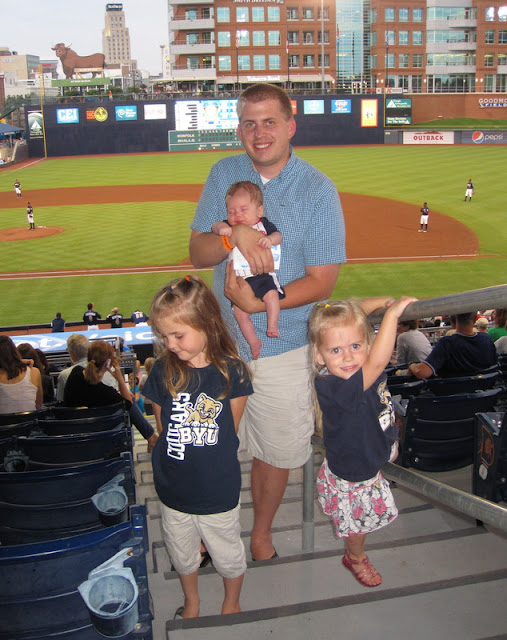 Also, why are we made to feel we aren't any good at baseball in school when apparently no one is very good at it? Andrew told me that a "good" batting average is around .300 which means that a good batter only hits one of three balls (to say nothing about whether anyone ever crosses home plate). many of todays players were batting below a .300 which means that more often than not they miss the ball! Suddenly I don't feel badly about the kid who gets picked last for baseball because it says nothing about his baseball skills. Getting picked for teams must say more about your social status than your skill, in which case I concede that it still sucks to be picked last. At least it's nice to know that I was just as bad at baseball as everyone else in middle school. It's just that no one liked me. Their loss, right?

I think Rachel and Andrew enjoyed the game the most. 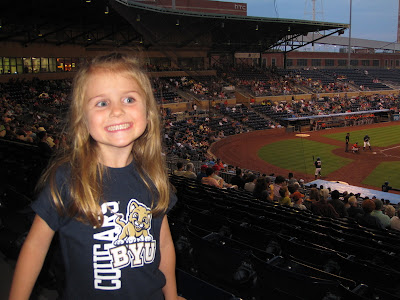 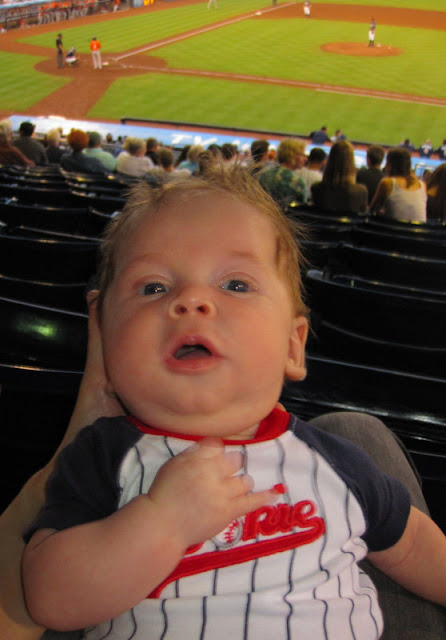 Miriam was mostly interested in dancing around and playing on the stairs. 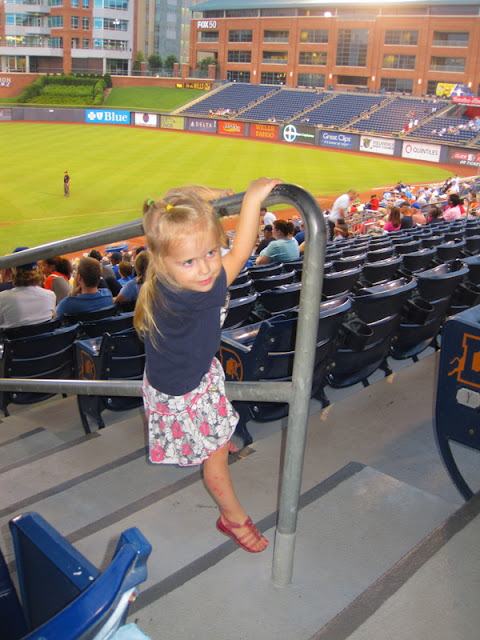 (And do you see all those bites on her legs? Somewhere out there there's a mosquito with an "I ♥ Miriam" t-shirt.) 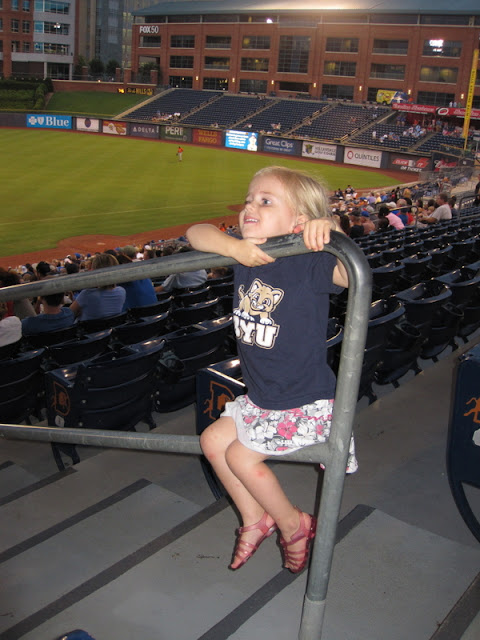 I think her favourite part was when the mascot came out with a bunch of little mascots trailing behind him. "Little cows!" she squealed. She waited for them to come out for the rest of the game. "And now the little cows will come out!" she said every time there was a break in the game. But they never came back out. She started to cry when we told her it was time to go (after the seventh inning stretch that Andrew wanted to stay for but which I missed because I was taking Rachel potty) because we didn't get to see the little cows again. I told her that the big bull (Woolly Bully?) had put the little bulls to bed because it was so late (it was) and we had to go home to put our children to bed. She decided that made sense. She also prayed for the little bull mascots before going to sleep.

I was feeling a little guilty about sitting down to watch the game while everyone else was "socializing" (the school had purchased a whole row of seats and we were the only ones sitting in them—everyone else was on the party deck) but only until I took the girls to the bathroom.

Because no one in our family can coordinate their need to pee.

Unless there's only one toilet available, in which case everyone has to go at once.

Anyway, I was a little shocked to suddenly be surrounded by inebriated people as we made our way across the party deck. Suddenly I was quite happy to not be "socializing" and instead be watching the baseball game. I am unaccustomed to the social drinking scene since a) I don't drink and b) I've spent the vast majority of my adult life living in places where drinking isn't socially acceptable (eg. Utah and the Egypt). That isn't to say I've never seen a drunk person (I've lived in Russia, which obviously means I've seen drunk people—shoot, I was peed on by a drunk man) it's just that I've never been completely surrounded by people who'd obviously had more than one beer.

We're not in Kansas Utah anymore.
Posted by Nancy at 9:58 AM