Now bring us some twiggy pudding

Figs have always seemed foreign to me, perhaps because my first encounter with a fig tree was in Jordan when I was pelted with a rogue fig while hiking through the Siq in Petra. Figs, like dates, are at home in the Middle East and the Mediterranean and other places like that (ie. not my backyard), except now my backyard is a place "like that." Deliciously warm, delightfully humid, and...alright, alright... I have no idea what I'm talking about when I say "deliciously warm" and "delightfully humid" since I missed most of the dog days of summer.

Still, we've had a few warm and humid days since my arrival. We also have figs. 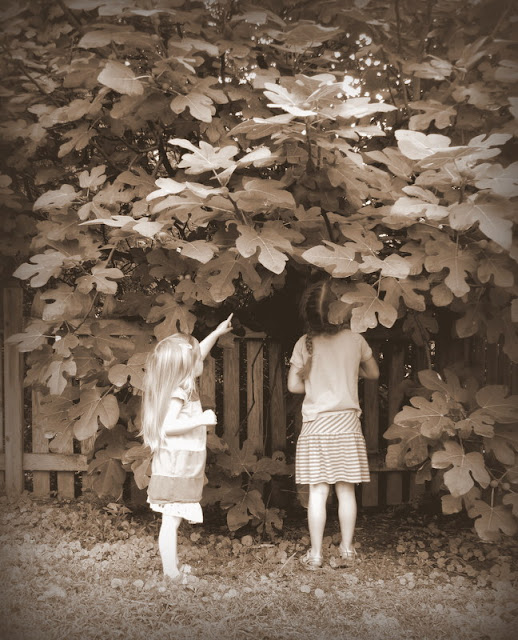 A few days ago the girls and Andrew stood around the tree picking figs, peeling them, and eating them. I declined their generous offerings since figs, as my father-in-law so wisely stated, belong "sandwiched between a cookie and wrapped in plastic." The first time I tried a raw fig I was very disappointed—it was in Israel and we had stayed for the munch and mingle after church on Saturday because we were starving and someone had brought figs. People raved about them. Andrew said they were good and he put one on his plate so I followed suit because he's a super picky eater (so if he liked figs they must be good) and because he'd already tried them (on his mission in Italy). Unfortunately, the figs were not good. I guess they weren't ripe or something because they tasted like dirt.

Apparently figs taste like a cross between a strawberry and a peach. If that's the case I will have to try them again because I like both peaches and strawberries. My kids were gobbling them down and if that's not evidence of their tastiness I don't know what is (actually, it might not be evidence of their tastiness given Miriam's appetite for dirt).

This morning we went out to pick some figs to make something with them. We haven't decided what we're going to make yet but we have been watching the birds and the bees and the flowers and the trees squirrels devour them—which isn't a bad deal, really, because we have no rotting fruit under our tree—and decided that we should get our fair share, too! Right now the debate is between freezer jam and fig newtons.

Anyway, we went out and picked a bunch of figs this morning. The girls and I picked all the ones we could safely reach and Daddy came home and picked the unreachable ones that we'd spotted from the lower branches. 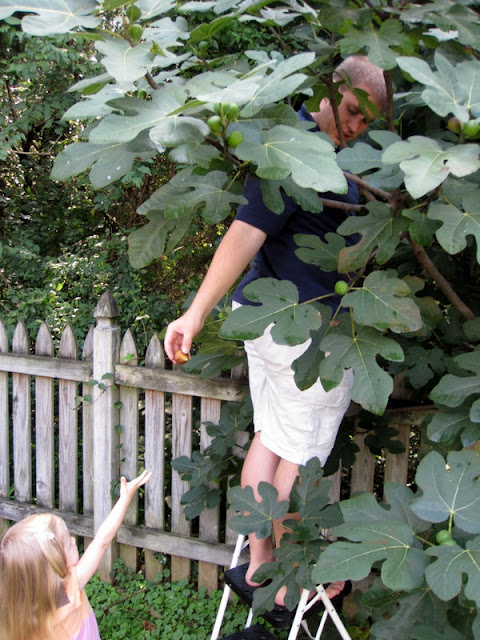 We ended up with about two dozen figs and several thousand mosquito bites. The girls were happy with our fig crop though less happy about their itches. 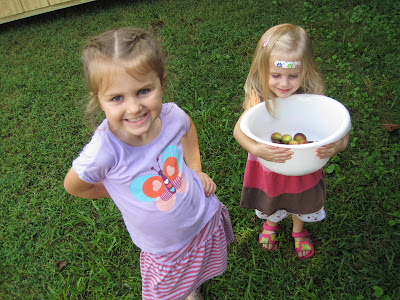 Miriam kept calling the figs apricots. Apricots are certainly one of the more bounteous crops in Utahn backyards so I suppose she figured that if it was a fruit growing on a tree it must be an apricot.


Rachel kept calling the figs twigs. I suppose this stems from her inability to pronounce consonant clusters because until this year train was fwain and tree was fwee and truck was...ahem. We've since increased our ability to pronounce consonant clusters and she can say twain and twee. If we're really lucky she'll get a good /r/ in there. We've been making her correct her pronunciation lately—as much as it pains my heart to get rid of the babytalk—because she's starting school and it's so much easier to learn how to read and spell if you pronounce things correctly. She over-corrected for this one (though it always makes me smile when she asks if she can pick a twig from the twig twee). 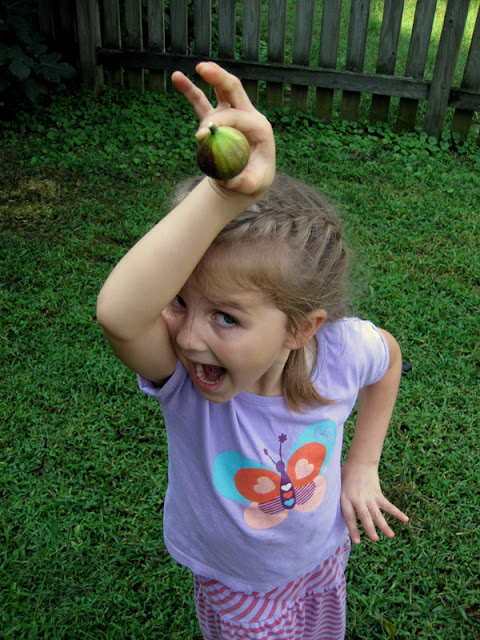 It's nap time right now, which would be an ideal time to use up our figs except that we promised Meme she could help. So we'll wait for the end of nap time.
Posted by Nancy at 2:16 PM