When I took Benjamin to his 2 month appointment last week, the nurse quizzed me on hs milestones.

"Does he smile responsively?" she asked.

"He's smiled a couple of times," I told her.

"He's said 'ooo' a couple of times but he doesn't just sit there and coo, no."

And then we weighed him--he was 8 lbs. 15 oz. I was pretty proud of those numbers but the nurse clicked her tongue and said, "Was he small when he was born because he's pretty tiny..."

She checked her chart. "Ah," she said, nodding her head. "He shouldn't be doing any of that smiling or cooing stuff yet, anyway, then. He's good."

This week, though, Benjamin has been a lot more responsive. This morning he smiled and cooed at the same time while maintaining eye contact. He's just growing up so fast!

I tried catching his big, open-mouthed grin but by the time I took the picture this is all that was left: 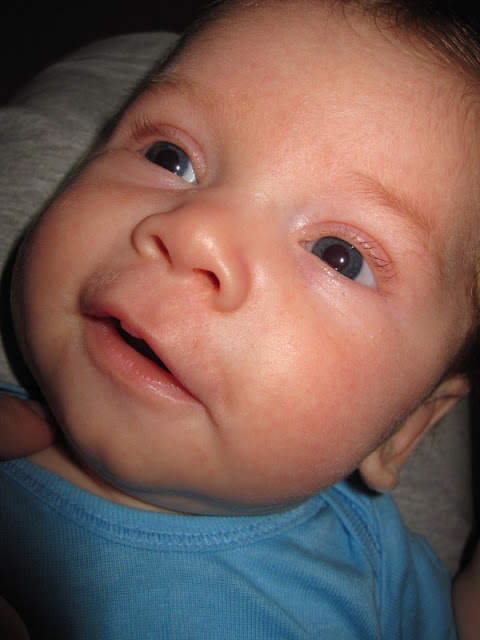 Just a hint of a smile, but still just lovely.
Posted by Nancy at 2:06 PM