Last Monday Benjamin had a doctor appointment (where we found he was an ounce away from 8 lbs!) and we got the order to do a 12-hour room air test that Wednesday. It was both scary and exciting to take the oxygen away. I was glad to still have the apnea monitor!

Benjamin's had no problems since coming home but on the 4th of July when we were doing his 12-hour request he had a couple of feeding-related bradys. My mom had spent the day with me and he had done alright but not great and he had a rather dramatic brady right before Andrew came to spell her off. I was crying and was sure we were going to fail the 12-hour test (again) and she was scared from having witnessed poor Benjamin turn blue and go limp while I feverishly stimulated his CNS. It was horrible. But it was also the last one he had.

Somehow everyone figured he was ready for his 24-hour request (even though I was super nervous for it considering how rough the 12-hour request had been—but he did fine that day and the next day and the next until here we are with what looks like a normal newborn baby!) and we got sent home with the apnea monitor and oxygen equipment that would become at once the bane and boon of our existence for the next couple of weeks.

So, because we'd had him on oxygen pretty much all day, every day for two weeks I was nervous to take away that crutch. But, boy, was I ever ready to! Having your baby all hooked up to things is not a whole lot of fun. Oh, and flying with oxygen is a lot more complicated than you'd think it would be so since we're planning on moving to North Carolina this month we were extra anxious to get him on room air.

Last Wednesday was the big day...


Our pulse oximeter was supposed to be delivered in the morning but they never showed up. Andrew eventually called them and they said that they hadn't gotten us onto their calendar and that they'd drop it off on Thursday or Friday. Andrew said that absolutely wouldn't work for us and that they could come drop it off that afternoon since he knew that it had been arranged since he'd called to verify the drop-off time. They said they'd manage and somehow found a guy to drop the monitor off that afternoon (and a good thing that was, too, since it's an overnight test and so the monitor would be picked up on Thursday and then the results sent to our doctor on Friday...if we didn't do it on Wednesday we'd have to wait the whole weekend to find out our results which means we would have found out this week instead of last week and since we're moving next week that seemed to be cutting it a little close).

The guy was friendly enough while he showed us how to use the machine. Having spent five weeks in the NICU, it wasn't very difficult to figure out. The man had noticed the 'welcome home' sign outside of our house and said, "Did someone just get off of their mission?"

We told him that Andrew's brother had just gotten home the day before.

"Well, isn't that the Canadian flag?"

Then I realized that he was talking about the flag hanging over the garage outside.

"Peru," I said haltingly, but trying not to sound like how my brain was screaming. "He served his mission in Peru."

Here's the thing about the Peruvian and Canadian flags: they both have red bands on either side so they are somewhat similar.

But here's the thing about the Canadian flag: there's a big ol' maple leaf smack dab in the middle of it.

And here's the thing about the Peruvian flag: there's a llama smack dab in the middle of it (okay, it's not a llama. It's a vicuña...same difference.... Oh, and there's also an entire coat of arms, though it seems as though the coat of arms is optional in which case the flag is almost identical to how Canada's flag would look like if the maple leaf were also optional. It's not.).

We may or may not have laughed hysterically after he left.

Here's Rachel's take on the Peruvian flag, in case you don't know what it looks like (you might want to find an actual picture of the flag if you want to know what it really looks like though her version isn't half bad): 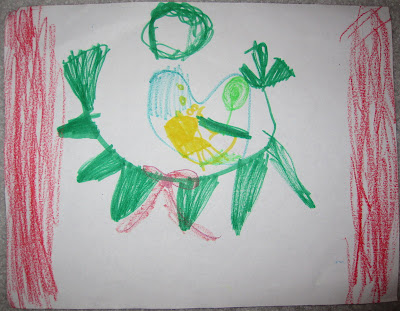 I'm going to assume that most of my readership knows what the Canadian flag looks like since most of my readers live in either Canada and the United States. I happen to feel that if you live in the United States you should be able to recognize Canada's flag since they're our neighbour to the north. It's not like they're completely unheard of. And their flag is pretty iconic and unique.

It wasn't as if he were confusing Slovakia for Slovenia. Or Romania for Chad. Bulgaria for Hungary, Jordan for Palestine or Sudan, Guinea for Mali, Ivory Coast for Ireland...? There are plenty of flags that I get confused—looking at this list of flags sorted by colour I am finding more and more.

Still, Canada is a relatively huge country, directly north of the USA. Y'all should recognize it at a glance.

Anyway, after spending the whole day teasing Jacob about his mission in Canada (it's funny because he served in Peru, remember?) we took Benjamin off his oxygen and hooked him up to the pulse oximeter. He did great! Every time we checked his numbers they were in the high nineties (or even at 100) and his apnea monitor never went off, either.

We excitedly removed his tender grips (the little circle stickers on his cheeks that hold his cannula on) and then I kissed his chubby little cheeks all over and pretty much haven't stopped since.

It is so nice not to be tied down (literally) anymore, though I am a little sad that we never got around to sticking a little moustache on his cannula...or taking his picture in front of the oxygen bar we came across one day (I don't know what an oxygen bar is but it sounds goofy...is it any different from walking past the perfume counter in the mall?).

Will someone please do those things for us because we missed our chance, just like I've missed out on having my dream labour story.

I always just run to the hospital and have a baby (though this last time I also found time to watch a whole half of a movie). Those other things sound like nice things to do in labour and one day I might see if they help...but until then I suppose other women will have to try them out for me. Just like other babies will have to stick a little moustache on their cannula.
Posted by Nancy at 12:57 AM