On Tuesday night Andrew put our trash out on the curb. Lucky for us that's the same day we had to put out our trash in Utah so we aren't (as) likely to forget about garbage day! We had a lot of garbage this week—so much that Andrew had to make a few trips to the curb after dark to sneak in some last minute items as we were unpacking because somehow garbage kept accumulating around us.

As he was walking out to the trash can he thought he'd take a shortcut across the lawn but decided against it when he noticed something glimmering on the grass. He stopped to stare at it and realized it was a spider's web, which made him rather glad he didn't go that way. Upon further inspection he noticed that the web wasn't on the grass at all. It was stretching from the tree above all the way down to the grass below. It was huge! Had he walked across the grass he would've walked right into that web. 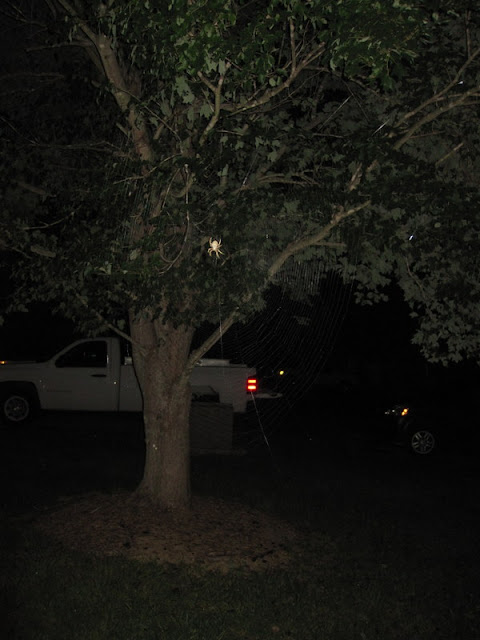 He came to find me in the house, saying, "You've got to come see this!"

I could tell he was a little freaked out so I questioned him about it until he finally told me it was a humungous spider. My imagination wheels started spinning and by the time we got outside I was picturing something tarantulesque (yes, I did just make up that word). Instead it was an orb spider, albeit a large one, so I said, with great relief, "Oh, that's not so big!"

And it is, guys. It is. It's at once beautiful and horrifying. And incredibly large. 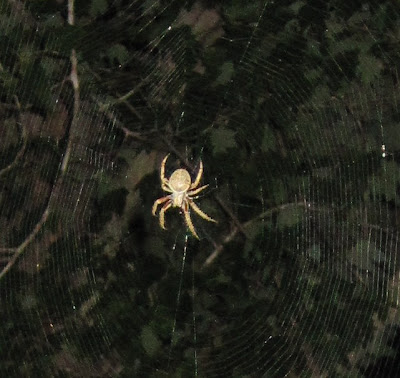 Still, it's rather small compared to its web.

We showed it to the girls on Wednesday night when we came home from the baseball game. They were a little intimidated by its girth. We all kind of are.

Andrew just told me that he wished he had put his finger by the spider when I took the above picture, for scale. I told him about our new pet orb spider, who has likely lived in the same tree for her whole life and who builds her web in the same spot every day for a whole summer—what a lot of work! She's not really a spider you can squish with a piece of toilet paper or smack with a shoe. She's...big...and she's permanent and, I said, "she's out there."

Andrew, by this point, was wishing he could eat his words but he swallowed his pride, slipped on his flip flops, and marched outside.

"There he is," he breathed.

"There she is," he breathed again.

He nodded and then reached his arm out. "Take the picture! This is terrifying!"

We'd already discussed whether orb spiders were venomous or not—some are but none seem to be all that poisonous (if at all); and they only bite when aggravated. But this wasn't very comforting because, as I said to Andrew, "I don't know what a spider considers aggravating!"

The golden orb spider, in case you're wondering, only bites when pinched. Apparently.

I want to know who found that out. And how.

(By pinching it, obviously, but why?)

Anyway, this isn't a golden orb spider. I'm not sure what kind of orb spider she is, but she's ours. 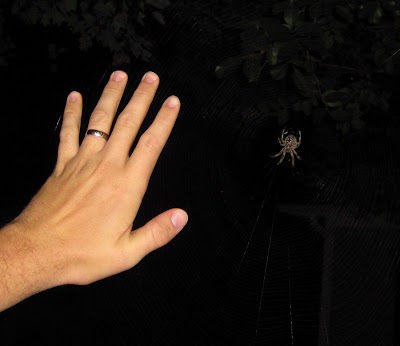 Rachel doesn't seem to be bothered by the knowledge that a spider lives in the tree. She's been waiting to climb that tree since Grandma showed pictures of it to her in June. Today she got her chance—Andrew spent the morning doing yard work while the girls played outside and Benjamin and I slept because we didn't sleep at all last night (and because my husband is awesome). Rachel climbed the tree right around the time I woke up. I took her picture and then I went inside to make lunch for everybody (because I'm awesome; besides, I was hungry). 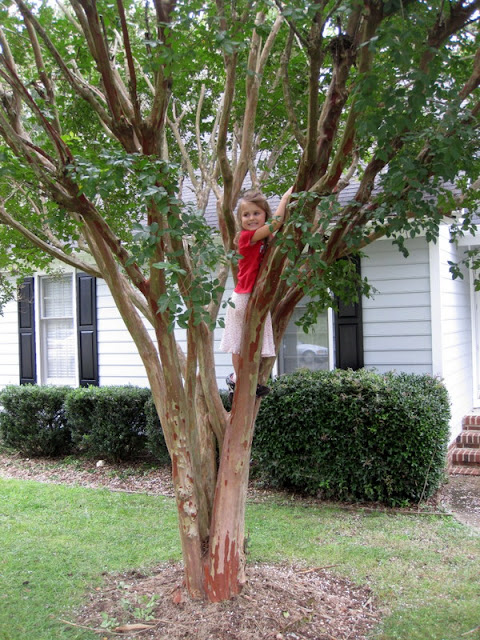 In addition to wanting to climb that tree, Rachel's been trying to catch butterflies. Her friends Luke and Cole gave her a butterfly keeper for her birthday and she's been dying to use it. On Thursday at breakfast a butterfly landed on the window to sun itself and we got to admire it while we ate. This reminded Rachel of her desire to catch a butterfly and so she set up shop outside.

She sat on an empty crate with an empty box for a table while she studied the field book that came with the butterfly catcher. She made a "net" out of a pipe cleaner and a napkin. She put some flowers in the bottom of the butterfly keeper and left the lid open, waiting for butterflies to take the bait. She even drew a decoy butterfly and cut it out and put that inside the keeper to attract a mate.

After a full afternoon of butterfly watching, she was without butterfly and extremely disheartened.

And then today, right before lunch, Daddy (who had just put the lawn mower away) opened the back door and poked his head into the house.

"Rachel, come here! You've got to see this!"

He held up her butterfly keeper—with a butterfly inside it! 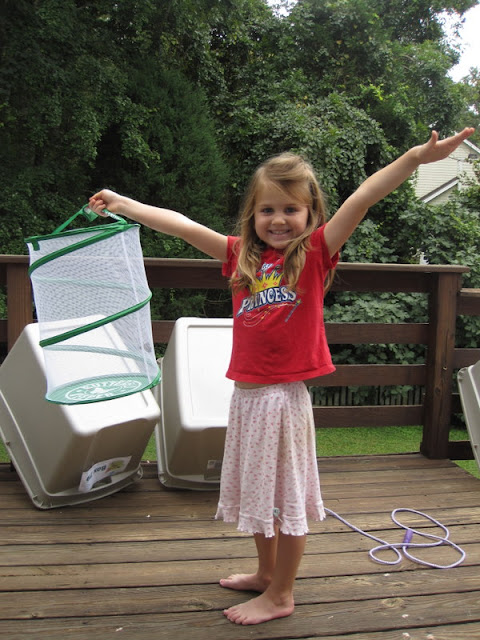 We set up a little home for the butterfly, with an overripe (and very juicy) fig from our fig tree (because we have one. Don't you?), some grass, and a little container of water. We'll see how it fares.

Rachel's pretty sure it's a buckeye butterfly. She's probably right because she knows that butterfly field book backwards and forwards from her afternoon on the deck.

This are just the beginning of our adventures with North Carolina's insects and arachnids, I'm sure...
Posted by Nancy at 11:32 PM