Here's a picture Miriam drew today of our family hunting for leprechaun gold in the clover in the backyard: 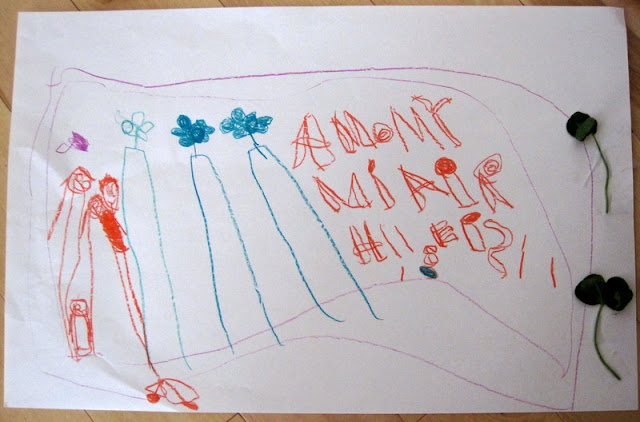 She wrote "To: Mommy" and "Miriam Heiss" in fancy bubble letters. That's what AMOMY MiAiR HSEIS means when it's decoded, in case you were wondering. And, yes, she taped hand-picked clover to the paper. Just for me.


This is a little story Rachel wrote about leprechauns at school: 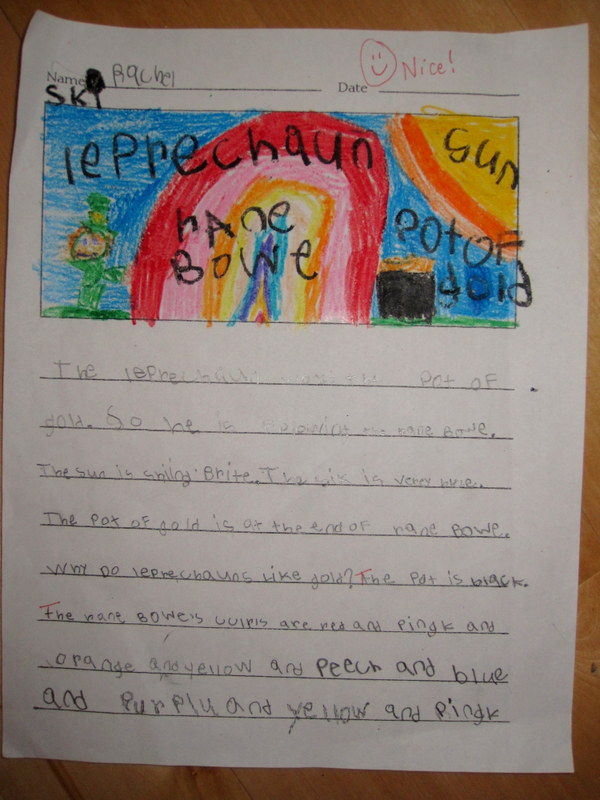 Here's another little story she wrote at school: 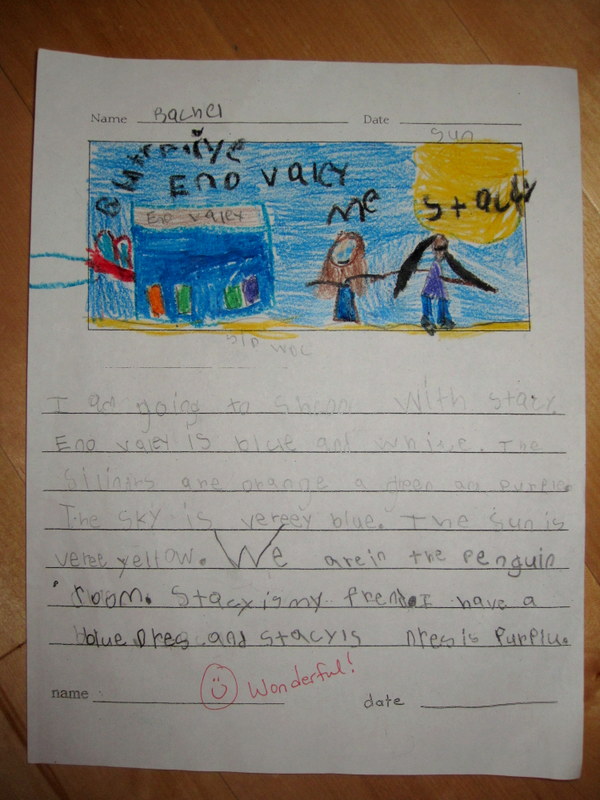 I am going to school with Stacy. [Our school] is blue and white. The cylinders are orange and green and purple. The sky is very blue. The sun is very yellow. We are in the penguin room. Stacy is my friend. I have a blue dress and Stacy's dress is purple.

They did an American History unit and have been talking a lot about symbolism. Here's Rachel's little paragraph about that: 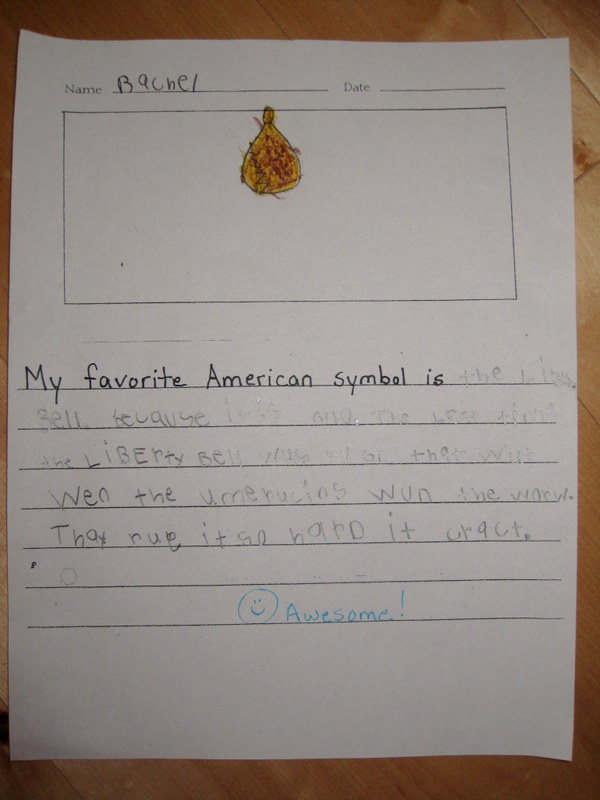 [My favourite American symbol is] the liberty bell because it is old. The last time the Liberty Bell was rung on that was when the Americans won the war. They rung it so hard it cracked.

And here's a little essay about grizzly bears, with several animal essays to follow... 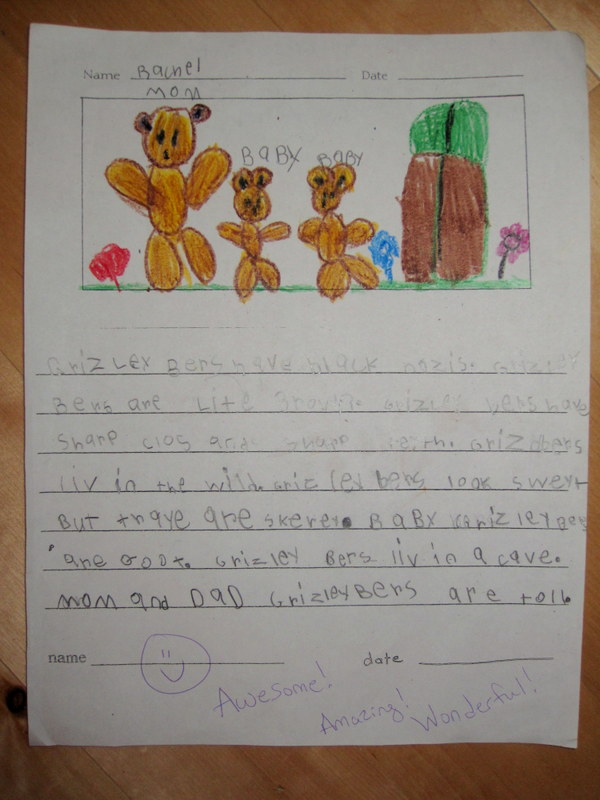 I almost feel there's a tongue twister hidden in there somewhere. 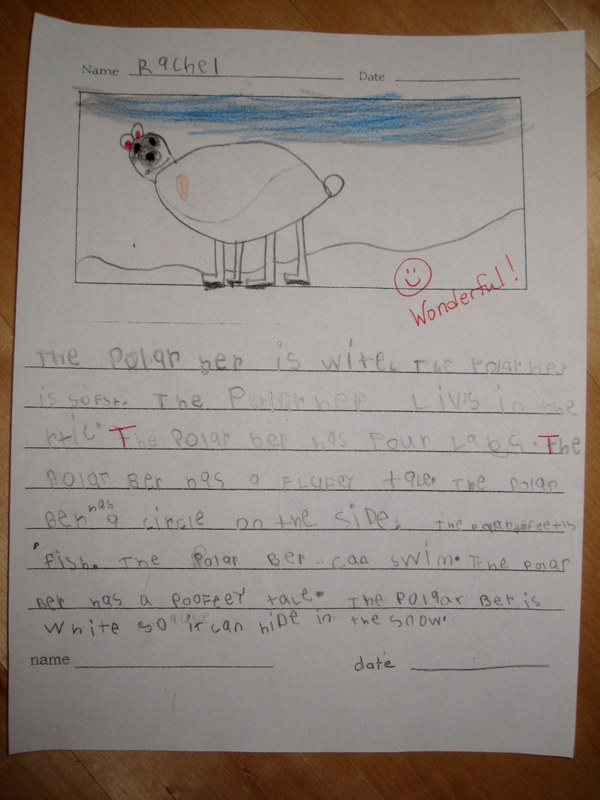 Yet another essay about penguins (Are you surprised? How many of these has she done?): 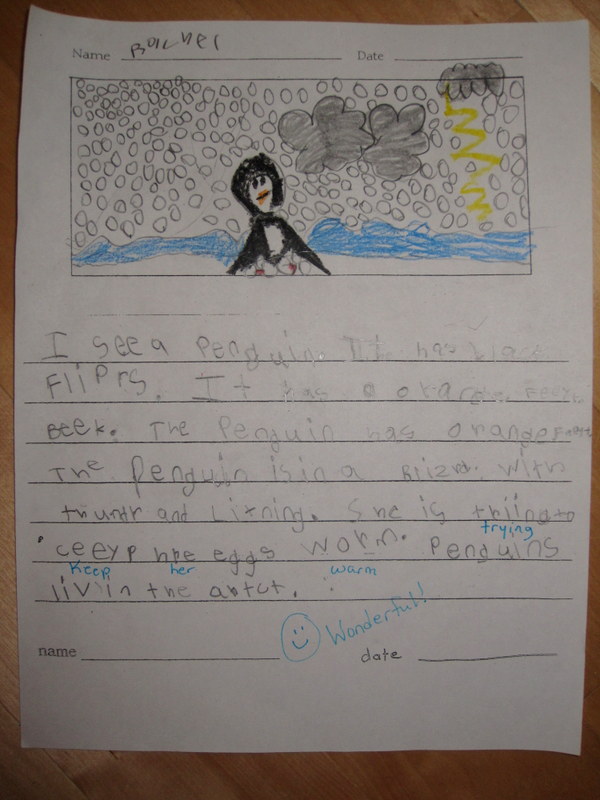 I see a penguin. It has black flippers. It has a[n] orange beak. The penguin has orange feet. The penguin is in a blizzard with thunder and lightning. She is trying to keep her eggs warm. Penguins live in the arctic. 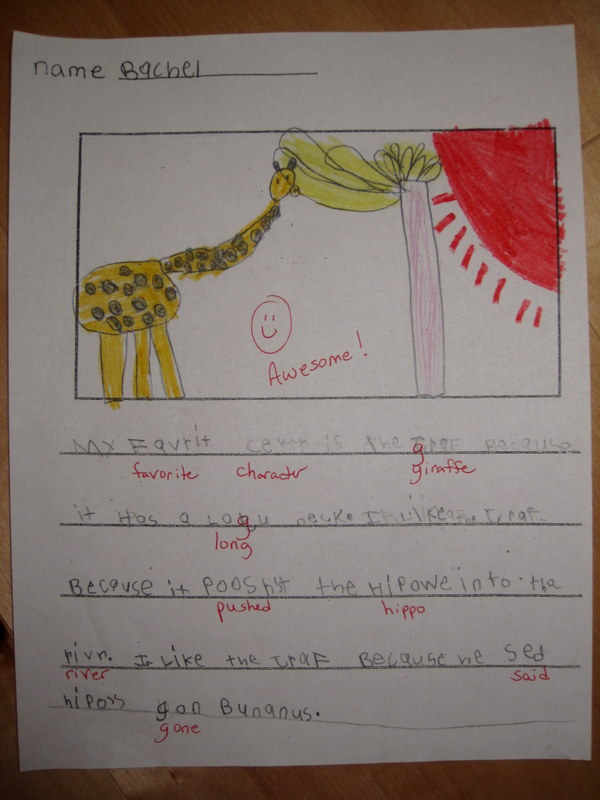 I'm going to assume this is about a story they read in class.

Here's a cloud-interpretation picture she made: 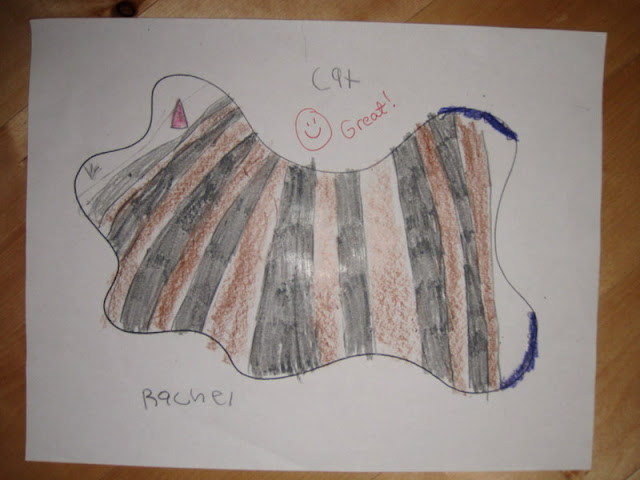 She turned her cloud into a cat. A cat like Hermione's, she told me, hinting wildly that a cat like that would be a lovely thing to have.

And one last essay, about picking flowers in our yard: 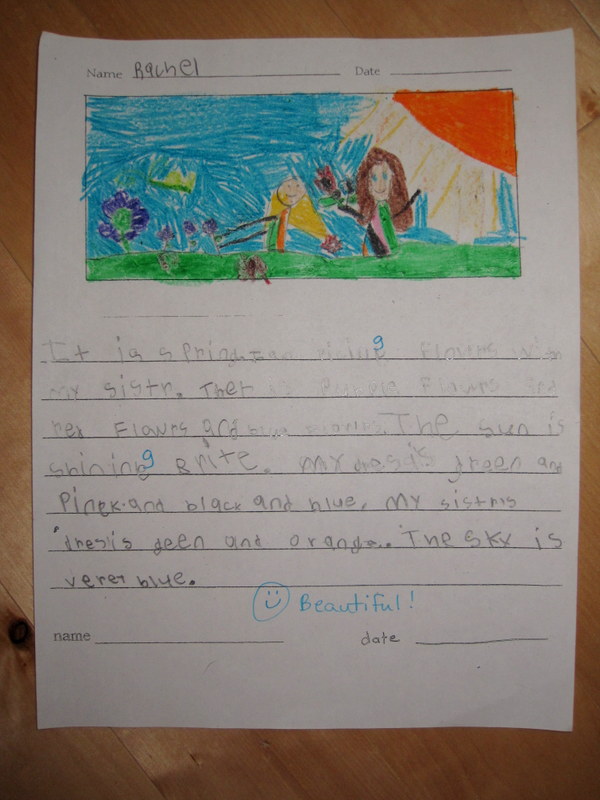 Here are a few more pictures from Miriam. This first one she was so excited about because she cut the paper in half all by herself (and then glued it back together). She told me it was for my Christmas present and asked if she could wrap it and put it under a tree until then. I convinced her to give it to me for Easter instead. 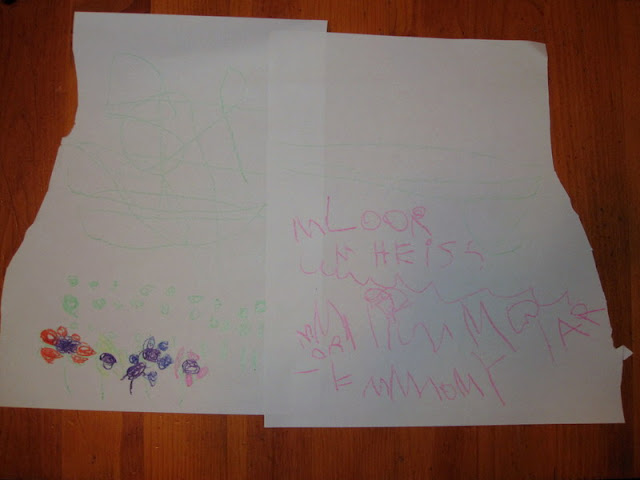 She tried to write her whole name. See if you can find all the letters for Miriam, al-Noor, Heiss, and Mommy.

If you succeeded in doing that, try to interpret this: 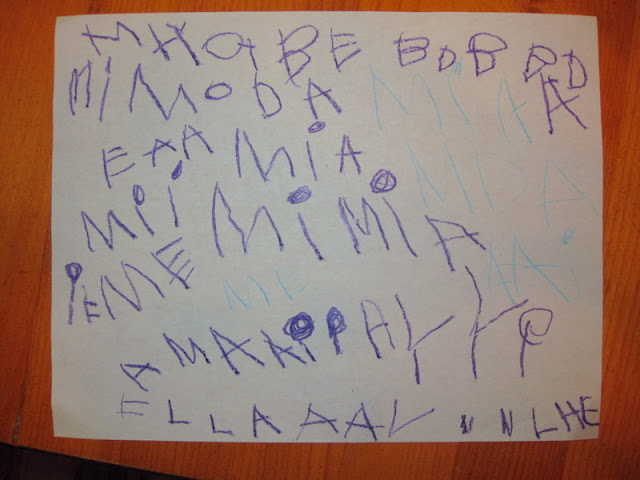 She told me it means "whatever [she] wants it to mean and a whole bunch of stuff and everything."

This next picture definitely says "Mommy/iMom," "Miriam/iMRMi," and "Dad/AAD." It probably also says "from" because that's a word she likes to pretend she can write. It may also say some other things. I'm not sure. But it's a beautiful drawing! 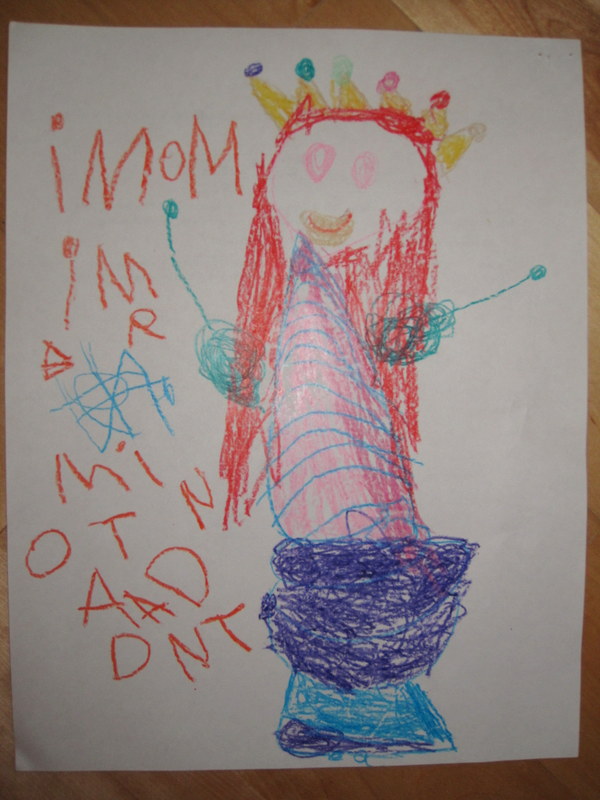 And that's it! Or at least, that's all that you're getting. You should see the rest of the paper kicking around here. It's nuts!
Posted by Nancy at 12:20 AM