Last night just as I was trying to fall asleep Andrew whispered, "You know, I think I might go for father-of-the-year tomorrow."

"How are you going to do that?" I asked sleepily.

"I'm going to get up early and make green pancakes for breakfast."

"You're not going to get up early and make green pancakes for breakfast," I laughed, now wide awake.

That man doesn't voluntarily get up early, but even without green pancakes we had a great St. Patrick's Day. Andrew got the girls cereal while I showered. He slipped green food colouring into their milk, which got them as equally excited about the day as green pancakes would have.

Then I helped Rachel into her green velvet dress while Miriam threw a fit because she couldn't understand how the world would be so cruel as to dictate that she must wear a certain colour on any given day. She wanted to wear pink but she also didn't want to get pinched and it was such a dilemma.

Finally, she settled on wearing a pink dress and pinning the clover I'd made for Rachel to the front. She also picked out a green necklace. And some earrings.

The girls helped me work on some posters for the ward Easter party I'm helping put together. This month I have that party to plan as well as a little "class snack" for Rachel's class.

"You're an introvert," he reminded me.

He also told me that they won't be opening the community pool until the middle of May (because it would be too cold before then...apparently) and that they'd be having a neighbourhood pool party with everyone invited (not just those who buy the pool pass) and they'd have a barbeque and swimming and neighbourly togetherness and I said, "Why would we want to go to that? The pool will be packed!"

"What do you want—the pool all to yourself?"

"You're such an introvert," he said.

Anyway, the girls helped me start the posters for the Easter party and we finished them up during stake conference. I figured the girls would be colouring anyway so it wouldn't hurt to colour something productive.

When we got home, it was surprisingly early. We'd started church an hour earlier than usual and it was only two hours long instead of three so we ended up getting home at about the same time we'd usually be getting out of sacrament meeting. It was kind of nice.

Andrew, who is still sick with this nasty cold, fell asleep after lunch (for three hours) so I was left to try and entertain the children in a quiet enough fashion that he could keep sleeping. We went for a walk, but before we did, I made up some leprechaun coins and hid them in the backyard, which is currently covered in clover. 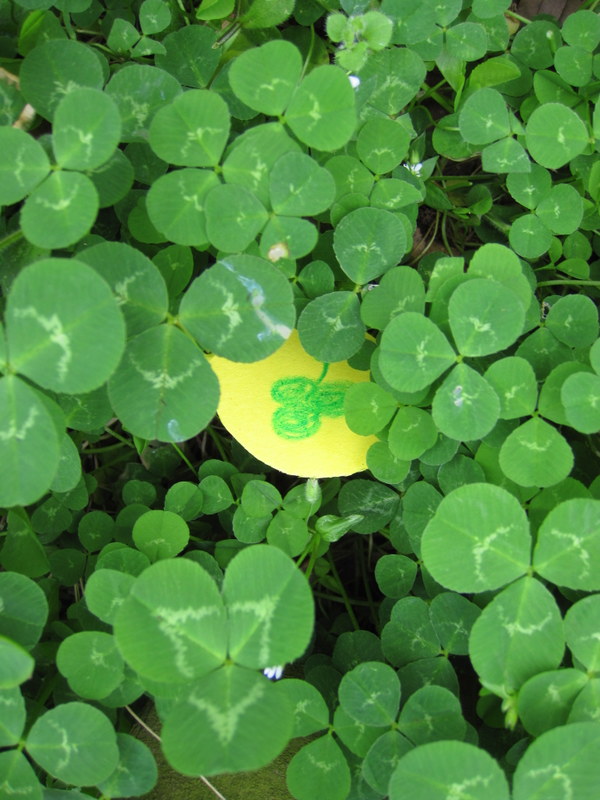 We walked up and down our street, admiring the daffodils that are blooming and commenting on the blossoming trees and chirping birds. Then I said, "I wonder if a leprechaun visited our yard."

"Are you serious, Mom?" Rachel asked. "Why would a leprechaun be here?"

"Well, we do have a lot of clover in our yard," I pointed out. "It's possible a leprechaun could have mistaken our backyard for Ireland and hidden his gold in our clover."

"Do you think so?" Rachel asked.

She took off running and had managed to open the gate by the time Miriam and I caught up with her. I'm glad she was able to do it because it's ordinarily next to impossible to open and after the first couple of tries she looked like she was about ready to scale the fence while wearing her Sunday clothes. (How do you hold a moonbeam in your hand?) Fortunately, she got it open and she stumbled into the backyard and started scanning around.

It didn't take her long to start collecting the gold pieces. And a pencil, which she pretended was a gift from the leprechauns. 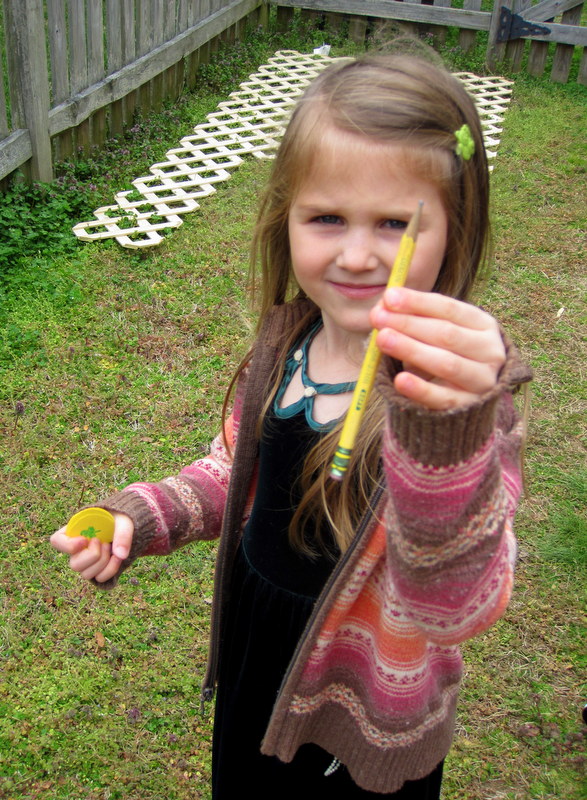 Her willing suspension of disbelief was greatly appreciated. She had fun collecting the "gold" and graciously pretended that it was real even though she knew it wasn't. She took the beginning of a little game and turned it into a wonderful backyard adventure for both herself and Miriam.

We hid the gold a couple of times so that they could find the pieces more than once. 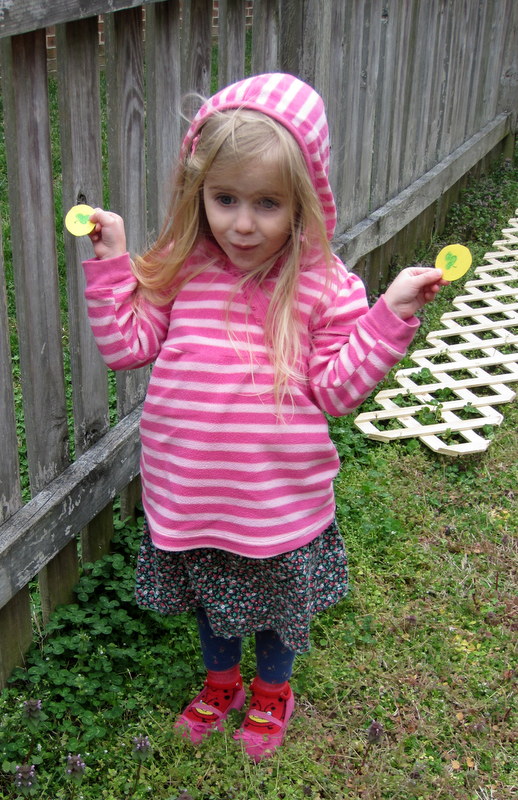 The girls also collected some clover to add to the bouquet they picked for me yesterday. Our yard is a jungle of wildflowers, which is totally fine in my opinion. Different things grow during different seasons and right now our yard is overrun with purple and blue flowers. I think it's fun when the girls bring me miniature bouquets.

This is what I ended up with yesterday:

Andrew can't stand it, and not because he doesn't like flowers. The poor boy has allergies. I completely do not understand allergies but from what I can tell they're awful.

Miriam collected handful upon handful of clover. She put some in with yesterday's bouquet and then kept the rest so that she could show them to her grandparents when we skyped them. 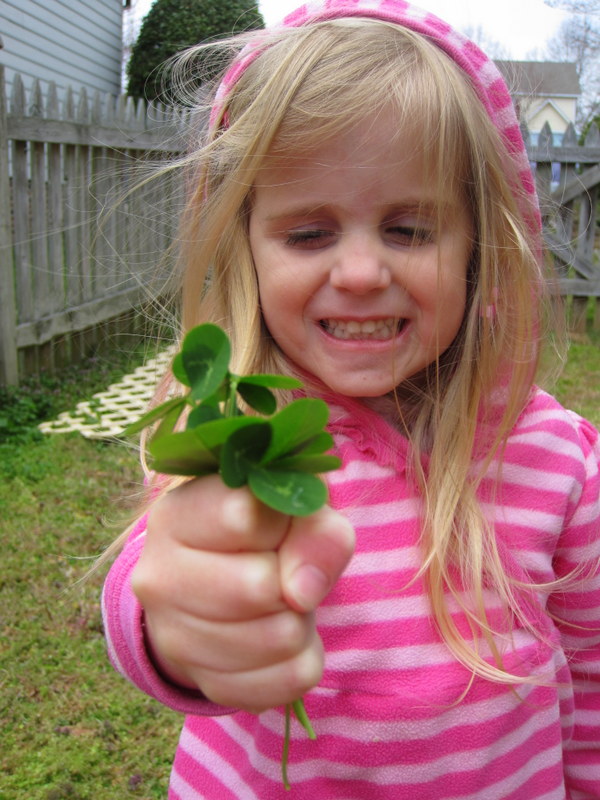 After she'd shown the clovers to both sets of grandparents she decided that we'd play a clover-hunting game inside the house and started hiding clover everywhere. I asked her not to scatter the clover around  but instead to keep it in one place and she said, "Okay, I won't. I'll just put it all over the house wherever I want."

She says stuff like that all the time. A couple of days ago she put a dish away in a wrong place. I knew she had put it away because I had seen her take it out of the dishwasher but when I went to find it I couldn't find it anywhere. "Where did you put the lid to this?" I asked her. 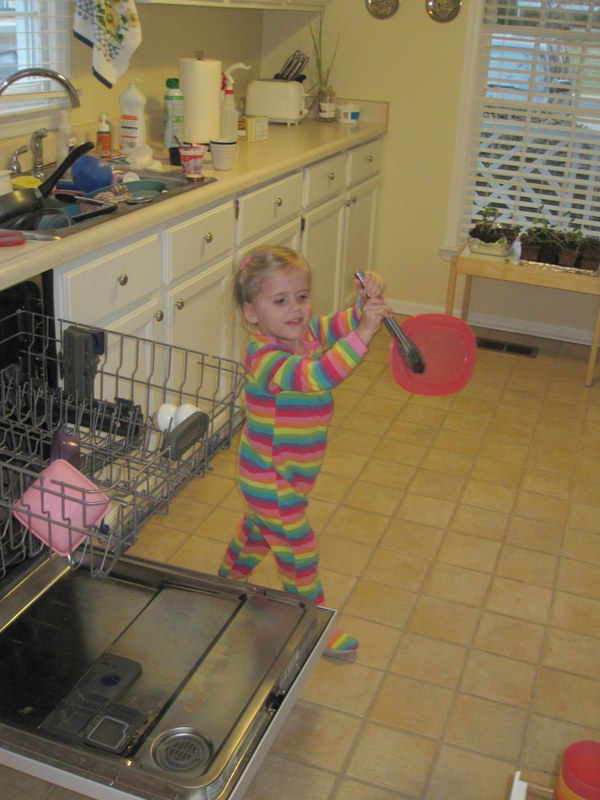 "I put it anywhere I wanted," she said.

"The clover doesn't have flowers yet," I pointed out to him.

"I'm allergic to grass," he moaned.

We've tried to clean up the clover but there are still bits of it around. It would have been preferable to keep it in a bouquet in one location even if we didn't have to worry about allergies, in my opinion. Unfortunately, my opinion often takes a backseat around here, especially if you can just ignore whatever mom says and do whatever you want!

Everyone wanted pancakes for dinner but instead I made stroganoff (because sometimes my opinion takes precedence—like when I'm the one cooking). I did consent to adding green food colouring to the rice and we had green beans (festive!) and the girls insisted that Benjamin eat green beans, too, so we dug out a jar of those. 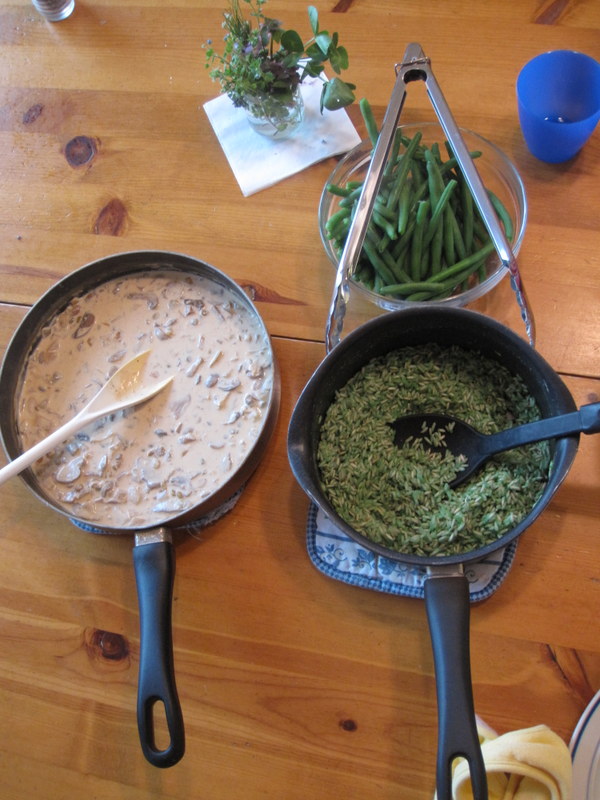 That boy gobbled down the entire jar of green beans. He wolfed it! He scarfed it! It was quite surprising considering how bored he gets when he's eating just cereal or applesauce. Evidently, green beans were what we should have introduced to get him interested in solids.

Considering how fond he is of eating the green stuff he finds in the yard, perhaps his preference for green beans shouldn't be so surprising. He likes wild onion, and I don't mind if he chomps on that, but there are numerous other things growing on our lawn that concern me. 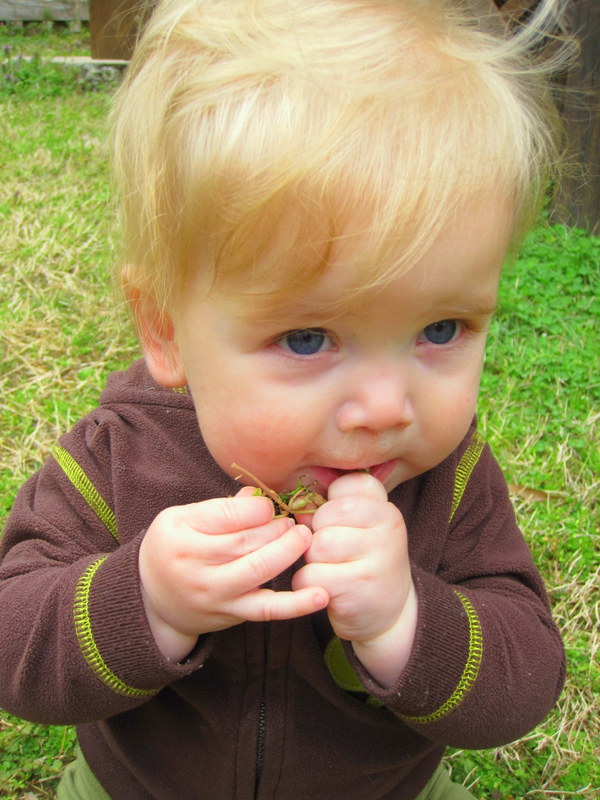 Purple deadnettle I know and can recognize. It's not poisonous, so he can pick that and eat it, too. However, I worry that one day he or I will confuse it for henbit, which I mostly find listed as poisonous (except for here and here) and which looks obnoxiously similar to deadnettle. I'll have to be on the lookout for it. 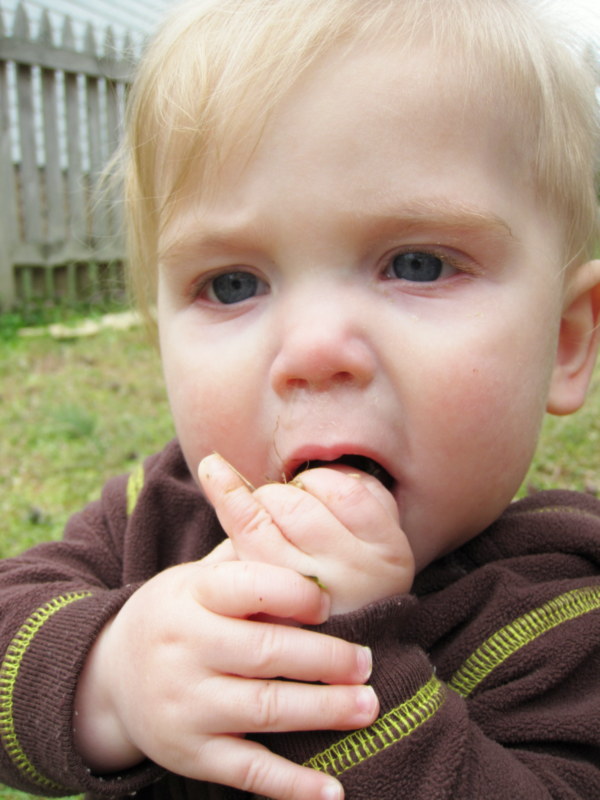 We might have some ground ivy (maybe fine) and some carolina geraniums (also maybe) and lots of clover (fine) and field pansies (definitely fine). We might have some corn speedwell (not edible, per se, but also not toxic). We definitely have hairy bittercress (edible). Then there's persian speedwell, of which I found one count saying it's poisonous, a few saying medicinal, and a lot saying nothing. *sigh* 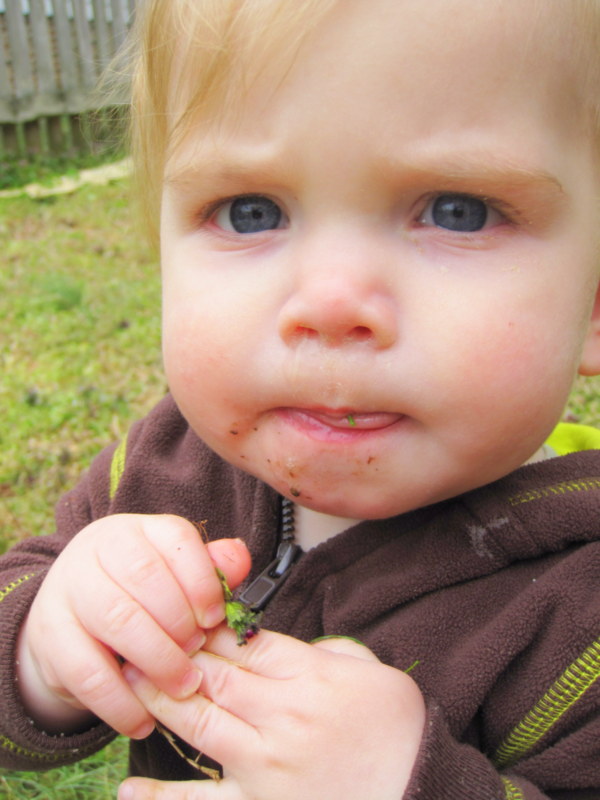 Where's the definitive List of North Carolinian Lawn Weeds You Don't Need to Freak Out About When Your Baby Noshes Everything In Sight when you need it? If one exists, I can't find it. But I want it.

I can't put this boy down on the lawn without him promptly pulling up a handful of greeny goodness and stuffing it in his mouth. If I offer him Cheerios, he'll shove those in his mouth, too, but will often spit them out, saying, "BLAH!"

(He really says "blah!" when he doesn't want to eat something (or doesn't want any more—even when he's nursing) and I think it's hilarious.)

For now I will take comfort in thinking that he isn't likely to actually swallow enough of anything to actually have a toxic effect...yet...and I'll just be sure to put him down by patches of obviously edible plants. Eat all the onion you want, kid.

Anyway, after dinner, we read stories (a lot of them because we had dinner so early because we weren't used to being home after church that long) and then made some dessert before shipping the kids off to bed. Miriam was so happy for dessert. She kept thinking it was cookies, but it wasn't.

Oddly enough (because I hardly ever make dessert) we made fruit pizza on Monday...or Tuesday? I can't remember. Anyway, we made it in a square pan and Rachel called it a cookie to which Miriam retorted, "That can't be a cookie! It's not round!"

In full disclosure, we also made cookies on Thursday because we had a friend over and we wanted to send cookies home with him (because in the past three to four months their little family has suffered from a heart attack, a preterm baby, and having that baby hospitalized due to RSV, in addition to their entire family suffering from the dumb cold that's been going around (which is probably RSV), as well as the stomach flu (which they currently have)—and nothing cures all-that-stuff like a plate of cookies...right?) and we also needed to make a dessert for a funeral of a man in our ward.

So we've had a lot of dessert this week, but that's unusual.

She was still right there, still asking that same question, when I opened the oven to check on the brownies. When she saw what it was she squealed, "CAKE!" and then ran off to tell everyone that Mommy had made a cake! She was skipping around on cloud nine—absolutely elated that we were having cake for dessert (the extra carrot made the brownies fluffier than brownies but still denser than cake).

"We never have cake for dessert!" she said.

I suppose the last time we had cake for dessert was October 25th, which is basically never for a three-year-old timeline.

Both girls stabbed their slices of cake with their forks and then picked the whole thing up and took bites of it from there—like a cake popsicle.

"No, no, no!" Andrew and I chided, noting the crumbs that were falling everywhere.

"Use your fork to cut off a bite instead of biting it off your fork," I urged.

They acted like we hadn't said anything but continued eating in their own "fun" way, which meant that cake was everywhere by the time they were finished eating.