We finished reading the last book in the Little House series on Thursday night. Andrew insists that we read Harry Potter and the Prisoner of Azkaban next in preparation for some adventures this summer. There is still so much of the wizarding world that Rachel has yet to discover—like Hogsmeade—because through books one and two our heroic trio are stuck on Hogwart's campus. We've been so focused on Little House, however, that we felt we could all use a refresher course so this weekend we watched both Harry Potter 1 and 2 (over two evenings).

Yesterday we told the girls they had to clean up before they could watch the movie and they had the entire house spick and span before I'd even finished nursing Benjamin. We let them eat dinner in front of the TV, which they always find exciting.

This evening they were disappointed when we announced that dinner would be held at the table but they got over their disappointment in time to watch the movie. It was hard for both of them to stay awake—Miriam actually had to go to bed before the movie was over—because they'd had such a long day!

They went to ballet in the morning and had had a rough time there. Miriam was having trouble listening and at the end of the lesson Rachel told her teacher that she didn't really like ballet—she was just doing it for Miriam.

We talked about it (both listening to our teacher and also about Rachel's uncommitted attitude about ballet) when they got home. Miriam's was a fairly easy conversation—just listen and obey, m'kay? Rachel's conversation was a little more complicated. See, I knew when we signed her up for ballet that she's really been wanting to try gymnastics. However, it was Rachel who found a ballet teacher. It was Rachel who asked the ballet teacher to teach her (and her sister) ballet. It was Rachel who begged to be allowed to audition for the performing company in addition to taking her class (while her parents were on the fence about it and her sister was clueless).

"Okay—tap is only fifteen minutes out of your hour-long lesson. What's so bad about tap?"

"It hurts to touch my toes."

They have to point their toes and try to touch them (which is a little harder than touching your toes with your feet flexed (and I fear Rachel has inherited my flexibility (or complete lack thereof))).

"Oh, but stretching is important—and it's supposed to hurt a little."

"But I just want to do gymnastics!"

"Wow...you don't like ballet and/or tap because you don't like stretching but you want to do gymnastics? Gymnastics involves a whole lot of stretching, let me tell you!"

"It definitely does. And ballet and gymnastics are actually pretty similar. They both require flexibility and rhythm and strength. Doing ballet now will help you with gymnastics later. Now, tell me something you like about ballet."j

"I like rehearsals for the show because then we actually get to dance!"

"Oh, all the little things you're learning now that help you know how to actually dance so that when you're in rehearsal and the teacher says you need to be in second position you know how to do it."

Rachel, automatically shifting her feet into second position, said, "Oh. So it's important even if it's boring."

"That's right. You can't do the rehearsals if you aren't in a technique class because rehearsal is not the place to learn to dance."

"Know what else I like? Pointe! I love watching the dancers on pointe! They're so good!"

"How do you think they started? In a class just like yours, but they didn't quit because it was boring—they kept slugging through it because they knew the hard work would be worth it."

After the tears were dried, and hugs were exchanged, Andrew mentioned that doing yoga is a good way to increase flexibility (not that he knows this from experience) and Rachel fixated on doing yoga. Lunch was hard to swallow because...yoga! She could hardly take her dishes to the sink because...yoga! She rushed to tidy the living room because...yoga! Could I please hurry and finish nursing the baby? Because...YOGA!

She was excited to set up our new yoga mats. We now have three of them because once upon a time I stumbled upon a great deal for a new camera case. Ours is one Andrew bought for his mission and it's been through the ringer—the velcro doesn't close anymore so the camera's always at risk of falling out, and so forth. So I found one on Woot.com for cheap. And I also saw a cheap yoga mat for sale and suggested we get one of those as well so that I could maybe possibly squeeze in a yoga workout without having my head get sat on (this is my mat, that one is yours). So Andrew ordered both items and then they got delivered...in identical boxes.

I opened the first one and inside was a hot pink yoga mat.

Because how could it not be hers? It was pink, wasn't it?

Very curious, I thought and told Andrew about it.

He checked his order and instead of ordering a camera case and a yoga mat he ordered two yoga mats, fair and square. To this day we're still not sure how that happened because we're both positive there was a camera case in his shopping cart.

Oh, well. Owning three yoga mats, as it turns out, is fine. It's actually probably better this way because all three of the girls can do yoga together and no one has to fight over who gets a mat and we each get our own defined space.

Today was our first day using all three of them together (since Rachel's usually at school when Miriam and I do yoga). 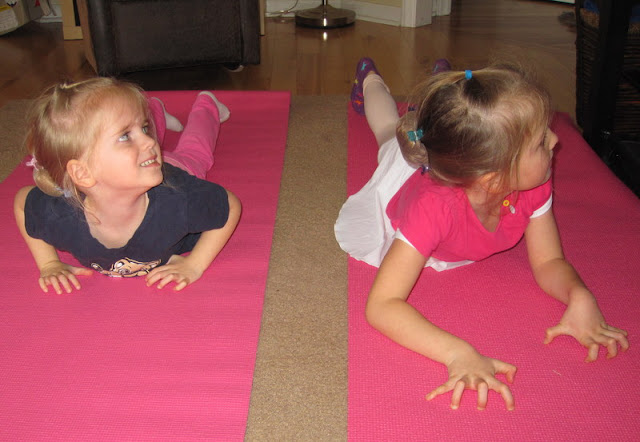 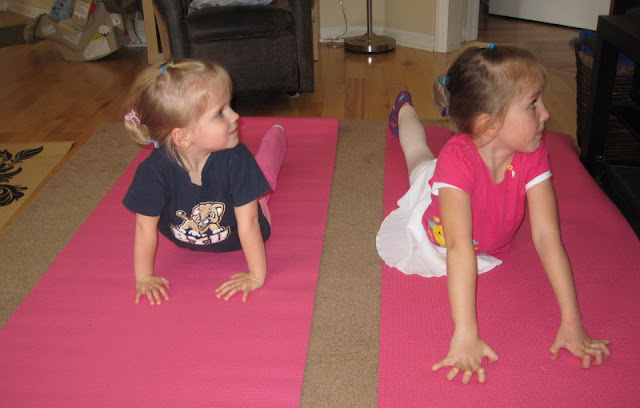 We did Yoga Kids ABCs all the way from A to Z. When we had reached M Rachel said, "We're almost done!"

"Yes, we're about at the halfway point," I answered.

"How can you tell?" Rachel asked.

"Because M is in the middle of the alphabet," I answered (sagely).

"Wow. How do you even know that?" Rachel asked, in awe of my seemingly limitless knowledge.

I know M is in the middle of the alphabet because I'm awesome. There's no other reason. 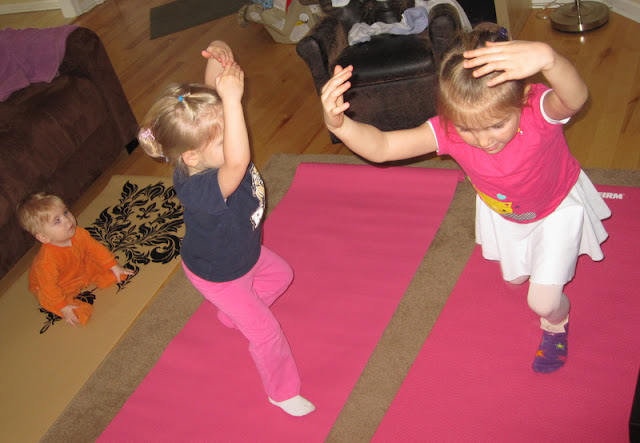 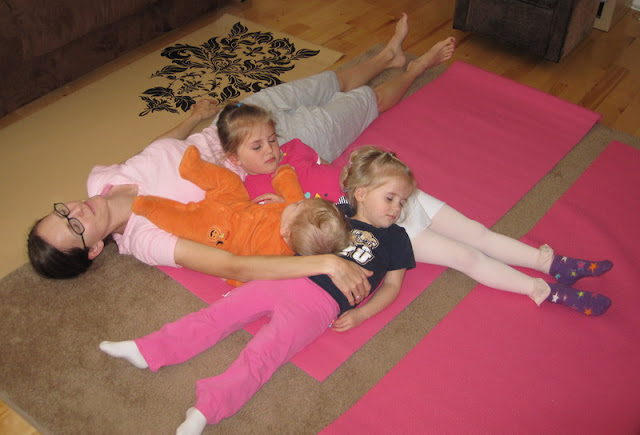 That lasted for about two seconds before the wiggling and squirming continued: 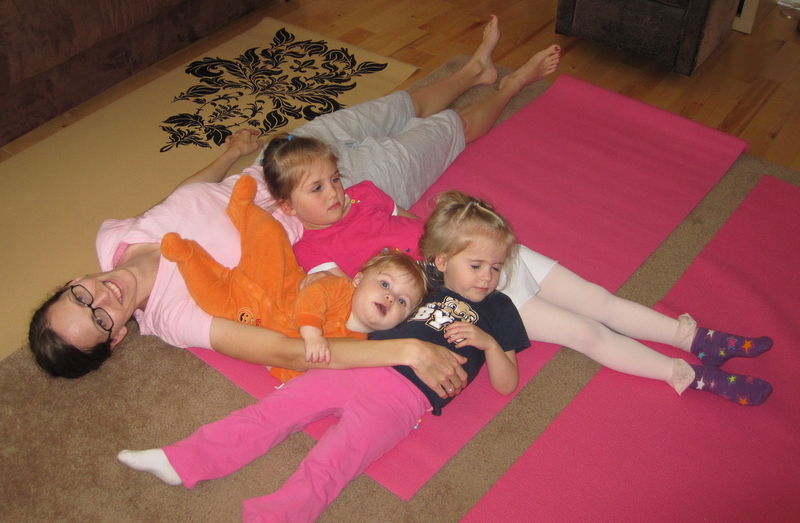 After yoga the girls got ready to head back to ballet for rehearsal, which went much smoother (emotionally) than their morning class, though it went about an hour over time.

The girls were exhausted this evening (3 hours of ballet and 40 minutes of yoga), which is why Miriam made her way to bed in the middle of Harry Potter. Rachel stuck through to the end, even though she was having a hard time keeping her eyes open. She's so excited for tomorrow so that we can start reading Harry Potter 3 and Miriam will, I suppose, just tag along for the ride. Andrew and I are a little concerned about that because Miriam's still a little young to be introduced to such things as werewolves (Rachel might be a little young, too) but as I pointed out to Andrew, Miriam usually wanders off to his desk and plays with the magnets on the filing cabinet when I'm reading chapter books, though he pointed out to me that she also soaks up every detail like a sponge regardless. We'll see how this goes...
Posted by Nancy at 12:45 AM