So, Benjamin just woke up screaming again. I can't even tell you how old this is getting.

I've been sick all week—and I'm sure he's the reason because he's been sick as well. And also because he never sleeps (or wakes up at regular intervals for screaming sessions) which means I never sleep which means my immune system is shot. With this cold I've basically become narcoleptic, which is why I haven't been blogging. Because when he's awake and I'm awake I can blog but after getting sick it seems the minute he falls asleep I do, too.

A couple of nights ago I fell asleep in the rocking chair while I was rocking Benjamin during family scripture study. Andrew got the kids to bed. Benjamin and I woke up later to party suffer together. We sleep at all the randome times during the day that we can manage, which means that sometimes I don't go to bed until six in the morning and wake up at ten to begin my day, which is kind of odd.

And now here I am, doing another weekly wrap-up, which probably won't even end up wrapping up our week at all...

Thursday was Andrew's first unofficial day of Spring Break. He still went to school, but he took a nap before he left the house. And Miriam made a fort out of him. 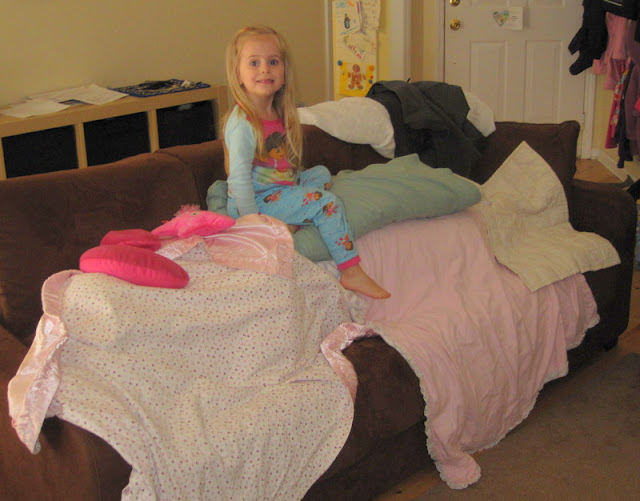 Miriam and I went through a bunch of the toys this week and got rid of a bunch that weren't being enjoyed anymore. I gave her some of my jewelry from when I was a little girls, including these clip-on earrings: 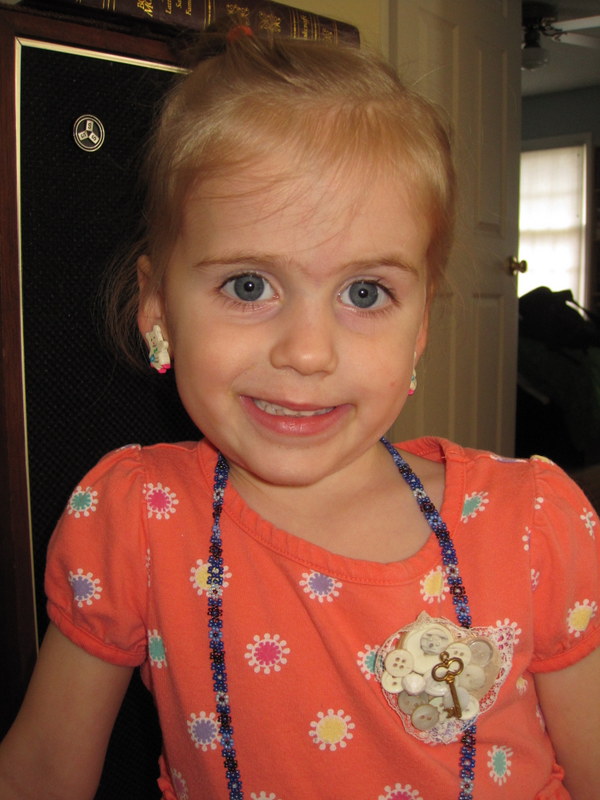 I think they're of a bear and a sheep...and I got them for either my birthday or for Christmas when I was either three or four years old and I loved them and kept them for over twenty years without losing either one of them. But I never wear them anymore so it was time for them to find a new owner. Miriam was thrilled. 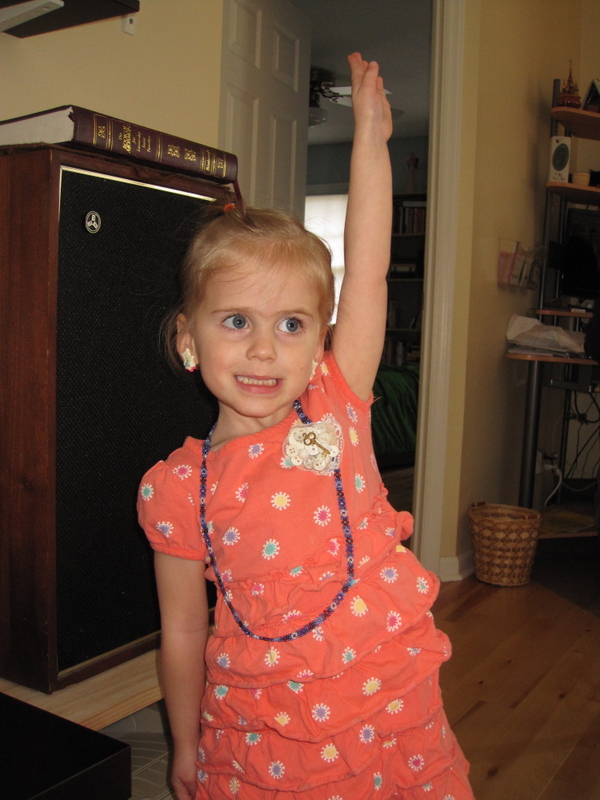 We took Benjamin to the doctor on Thursday as well. They prescribed a breathing treatment but instead of a nebulizer he gets his albuterol in a regular asthma-type dispenser with a baby-friendly "air-chamber" mask attached to hold the albuterol until he can inhale it all. That piece of plastic alone cost us over $60. 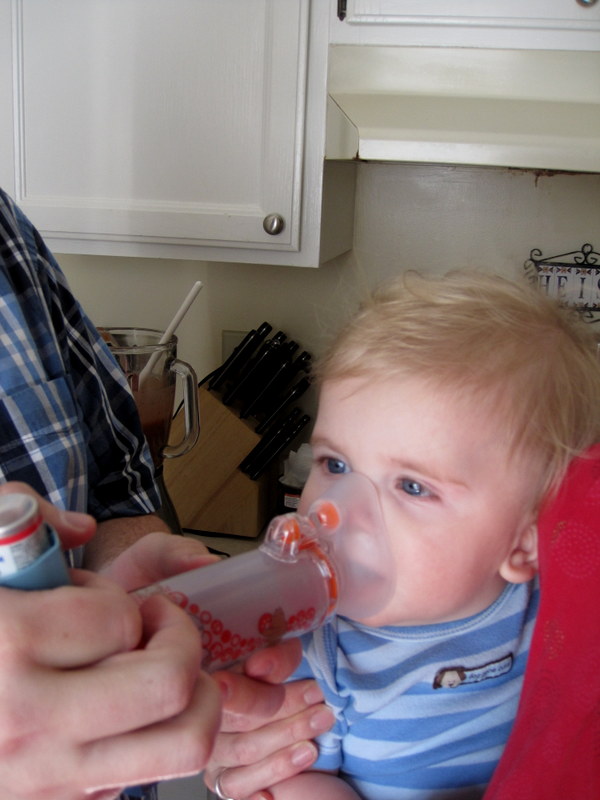 But the breathing treatments have been helping him be a happier boy and his breathing is a little less crackly now than it was earlier, I think (though I can still hear it crackling while he's breathing right now (he just fell asleep on me (kind of))). 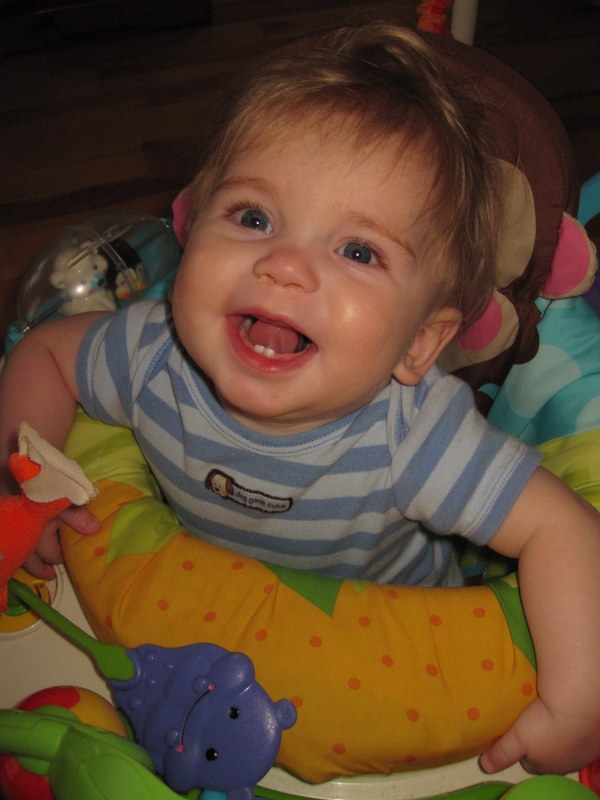 We had pizza for dinner on Friday and let the girls make individual pizzas. Rachel made a rocket and Miriam made a skirt.

On Sunday Benjamin wore the new vest that Grandma Sharon and Grandpa Frank sent him for Christmas (the shirt they sent with it is still too big). He took a little break from screaming his head off to smile for this picture: 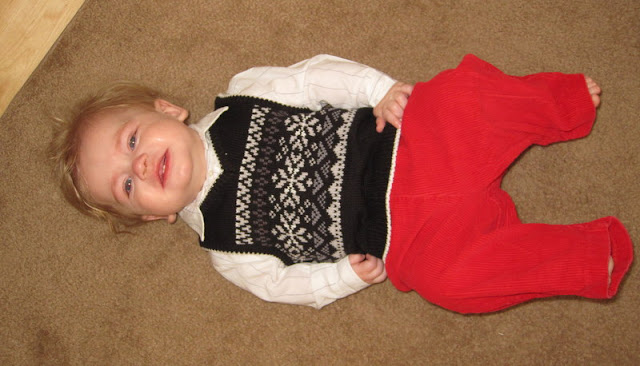 Andrew learned how to do a ponytail on Saturday night. I usually make an effort to make sure the girls have their hair securely tucked away before meals because I don't bathe my children everyday and so if they get sauce or syrup or toothpaste or whatever in their hair and we don't notice before we try brushing it in the morning it causes great pain (because it causes big knots to form). I made applesauce on Friday and made applesauce-stuffed French toast for dinner on Saturday, which meant we had syrup, which meant that ponytails were a must before dinner.

Benjamin was fussing and I was struggling to get the girls' hair back while I was bouncing him. I got Miriam's ponytail finished and then much to my surprise Andrew stepped in to do Rachel's ponytail. I coached him through it and he pulled it off beautifully.

"Uh-oh! You're in trouble, Dad! You haven't been doing your best work—you've just been putting barrettes in my hair when you should have been trying ponytails!" Rachel chided. Her class had a letter sent home recently encouraging parents to encourage their children to do their best work because her class tends to not, which is sad.

But she got into a different school for next year (yay!). It's a year-round school, which will be an adjustment (but I think it will be a nice adjustment) and she already has a handful of friends that go there, which will be nice because she's really struggled to make good friends at her current school.

Anyway, on Sunday morning Andrew and the girls surprised me while I was doing my hair. When I came out of the bathroom, the girls were sitting on the couch, fully frocked and coiffed. It was a beautiful surprise! 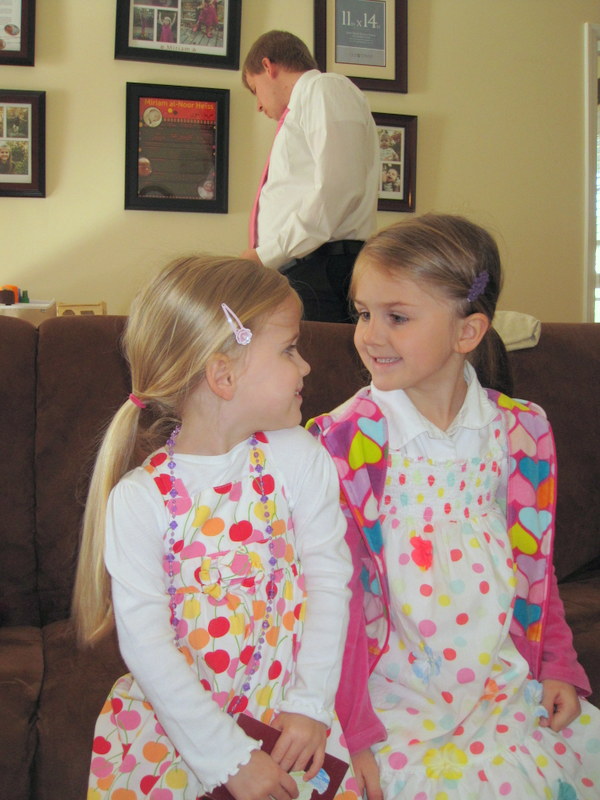 I read an article this week about the importance of reading to your children—and how many families, specifically those in lower income brackets (like the bottom 5%), don't realize how important it is. I keep wondering if it's important that it happen in the home or if, for example, "at risk" children were buddied up with a peer reader at school (we did a ton of peer-to-peer work at the elementary schools I went to, crossing grade levels and such (crossing guards, lunch monitors, reading buddies, etc)) who read to them for twenty minutes every day. If a grade five class was given the task of reading to a younger child for twenty minutes every day...would that help level the playing field for the children who don't get read to? Or does it have to happen in the home? And what if it happens in a foreign language? Like, if children of hispanic immigrants get read to in Spanish at home does that level the playing field for them (not in English, obviously, but in imagination and learning ability and so forth)?

Anyway, there's obviously a lot more to research in that arena (for me, at least)...

Andrew picked up Miriam and Benjamin and read to them while Rachel and I cleaned the kitchen (or, ya know, at least tided it up) after dinner. When I walked by he said, "I'm just inoculating our children against childhood illiteracy." 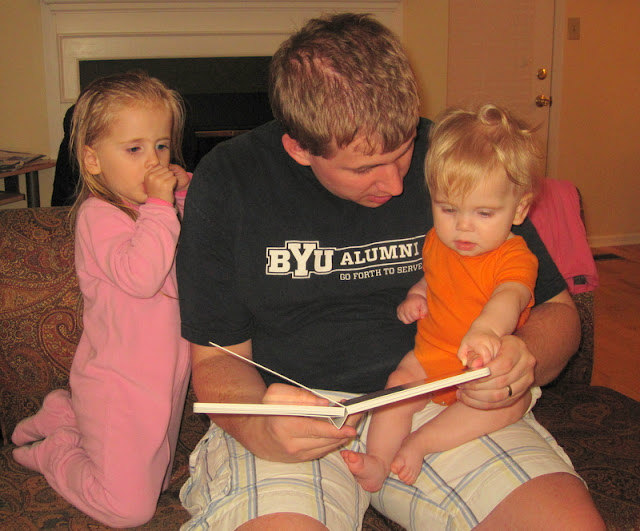 It actually ended up helping quite a bit because when it was time to do our regularly scheduled evening story time it was a little bit later than usual so we were able to skip straight to our chapter book reading instead of doing the picture books first.

This week I'm especially grateful for Andrew, who does so much for our family in general but still manages to step up to the plate and take over my responsibilities when I'm not at my best. He's awesome.
Posted by Nancy at 10:48 PM