If these two women were the only people you ever met in your entire life, you'd be completely convinced that the world is full of wonderful people. I know a lot of terrible things happen in the world, but good things still happen and wonderful people still exist and these teachers my daughters have are just amazing!

This morning, Miriam's Sunbeams teacher hosted an Easter egg hunt at her house for all the cute kids in her class. She didn't have to—she's only asked to teach them on Sundays—but she is the most wonderful lady and has completely adopted all of her little sunbeamers as extra grandchildren and by extension I think she's also adopted the previous generation because she hugged everyone before they left, including all the moms.

She never raised any children of her own, which just boggles my mind because she has all those little sunbeams trailing after her like the Pied Piper all the time, and was really nervous to take on this assignment, but she's doing a great job! She's married to a man who had already finished raising his kids—and they just recently moved up to North Carolina from Florida to be closer to their daughter, who is in our ward, and whose son is in Miriam's sunbeams class.

Anyway...this sweet couple dyed a bunch of eggs, bought a bunch of candy, hid it all over their yard, and invited five sunbeams, plus all their siblings. They had individual chocolate bunnies hidden for each of the little ones (three and under) and had little treat bags made up for all the older siblings (five and up). They knew exactly who was coming knew all the children by name and made them each feel so welcome and special. 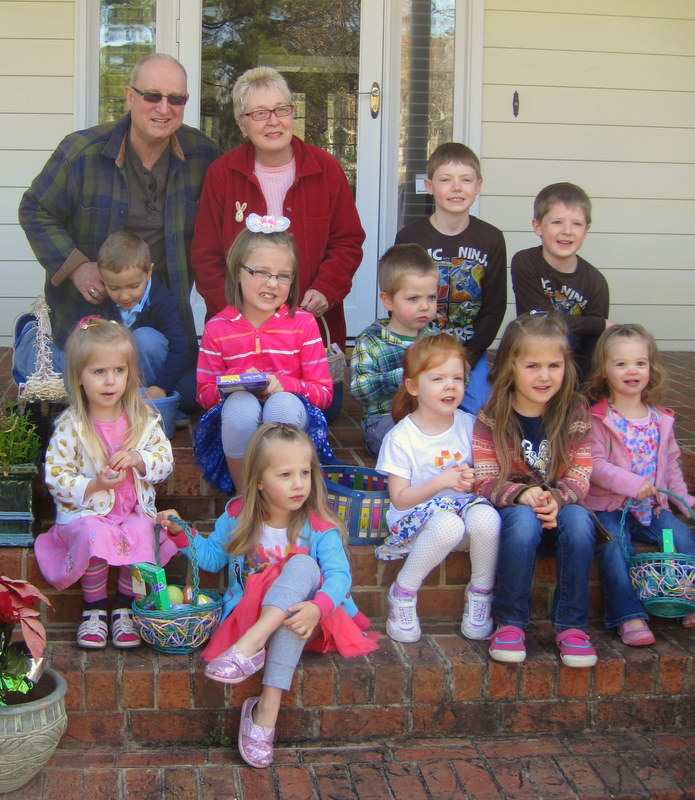 "Moving away from Florida was hard," Brother W. said, "But this? This makes it all worth it!"

You know the type of people who you just know would do anything for you at any time? That's this couple. If they know you, they love you. It's that simple.

Anyway, here are some pictures of my girls enjoying the hunt. Miriam was officially hunting, while Rachel was just helping out.

Miriam was rather particular about what she chose to put in her basket (which didn't really come as a surprise since at last week's Easter egg hunt she was chucking things out of her basket). She mostly chose pink things and completely ignored the rest. In this picture I can see several pieces of candy resting at her feet but she's squinting into the bushes, hoping to catch a glimmer of pink metallic wrappings: 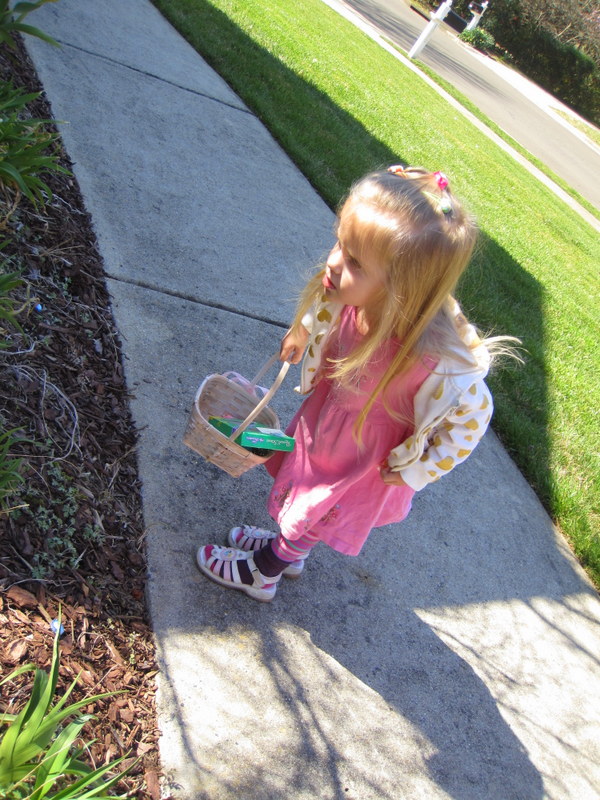 Rachel, meanwhile, was like, "Wahoo! Free stuff all over the place!" 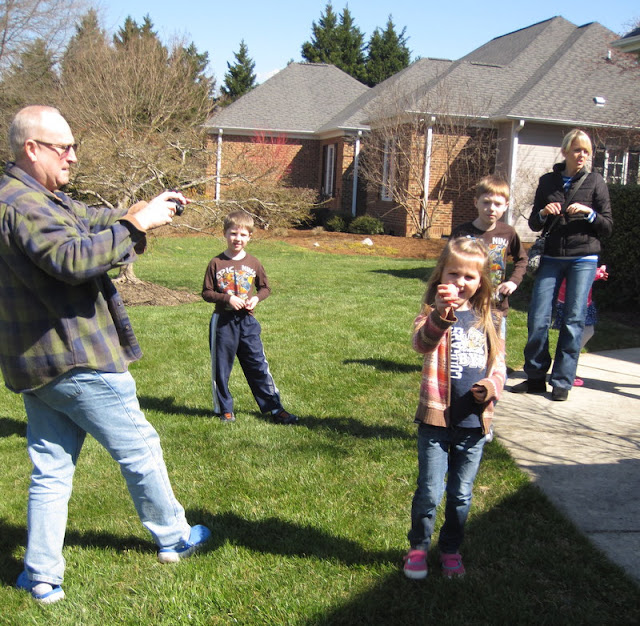 It's probably more thanks to Rachel than it is to Miriam that we now have a basket of chocolate sitting on our kitchen table.

Miriam's exceptions to the pink-only rule were 1) her chocolate bunny—because it had her name written on it, 2) peanut butter cups—because she recognized their shape and she's no dummy, and 3) the hard-boiled eggs—she seemed to be trying to collect one of each colour and probably collected more real eggs than candy (which nicely supplemented the picnic lunch we had at the museum after we finished the egg hunt). 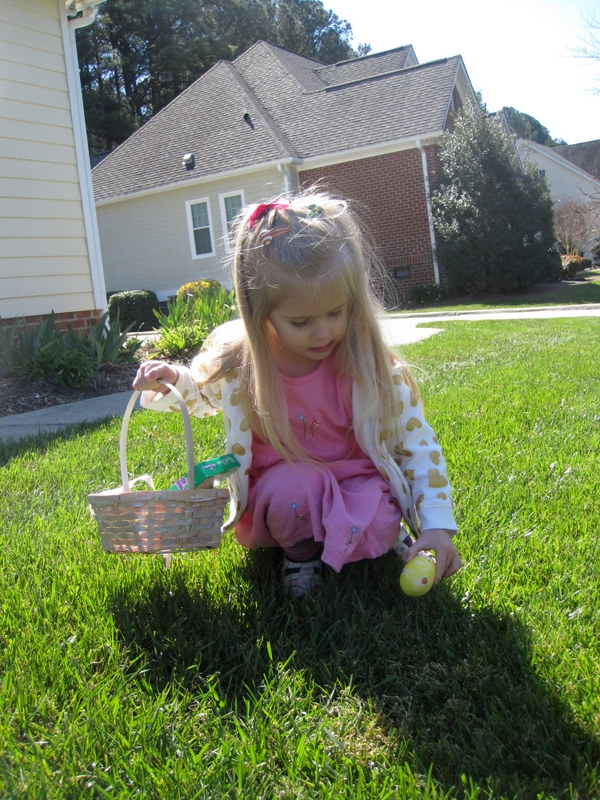 Here are my two sweet girls pausing for a picture: 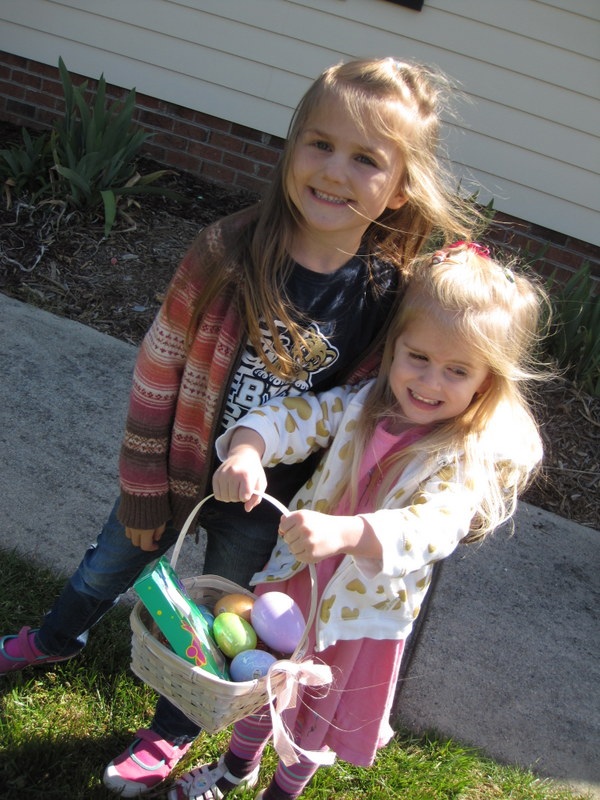 And here's Benjamin, who hung out with me the whole time: 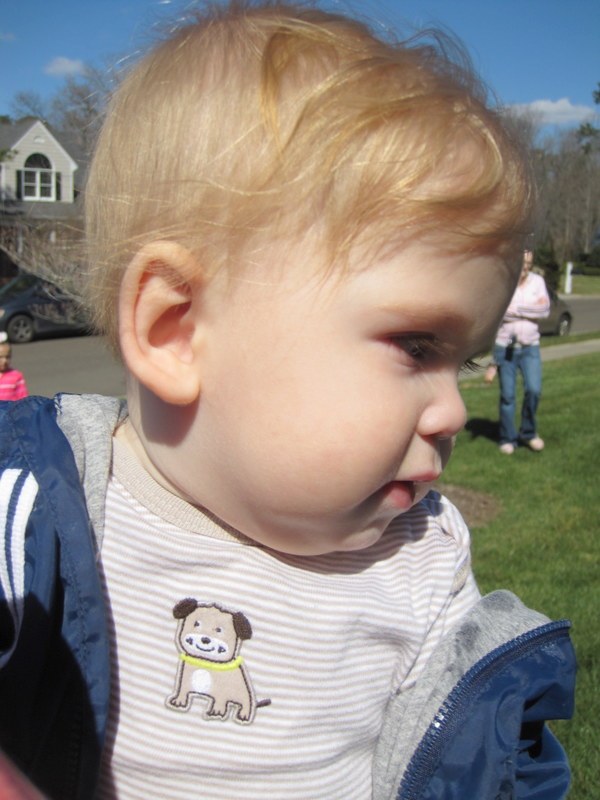 Another grandma in the ward was there and she offered to sit on the porch and hold Benjamin while I trailed Miriam but Benjamin was not a fan of that idea. He's got separation anxiety down to an art. 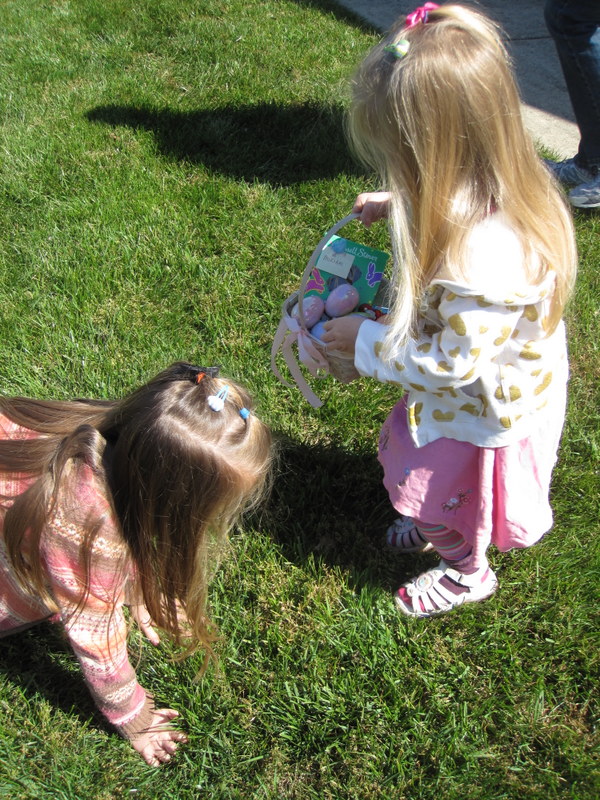 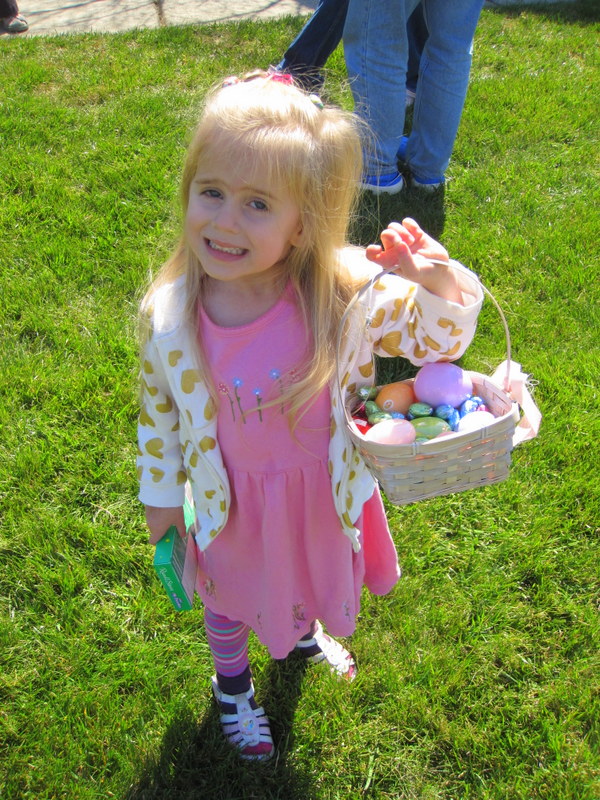 And here's Rachel with the "helper" prize that this couple had made up for her. She was happy to get candy at the end because Brother W. had joked that they had carrot sticks for the helpers because they'd used up all the candy on the sunbeams: 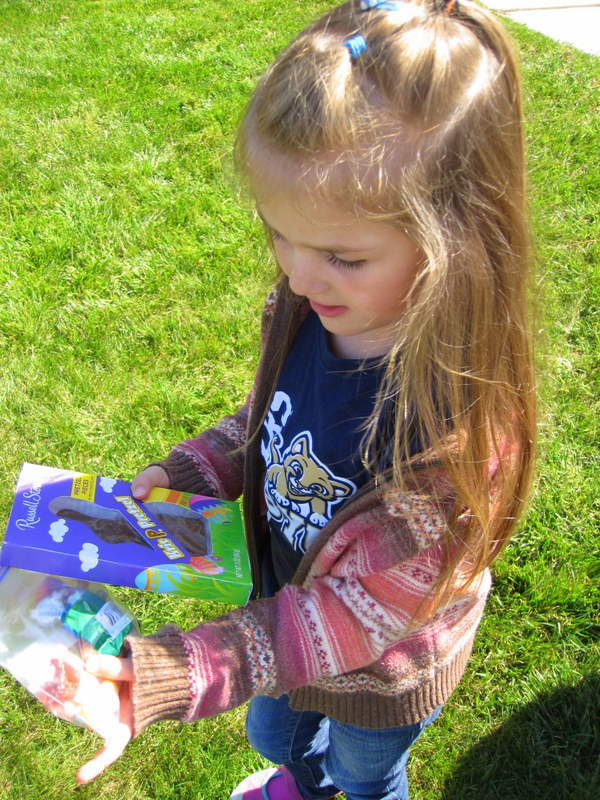 She didn't get as much candy as Miriam, but that's okay because she had her little Easter activity at school yesterday and Miriam had to watch while Rachel hunted for eggs (she had to find specific words written on eggs) and another mother in the class had sent goody bags for each of the kids (so she ended up with quite a bit of candy, too).

I was able to keep Miriam calm through all that because she knew that Friday was her day!

She spent the last couple of weeks looking forward to this egg hunt.

"When will it be Friday?" she'd ask. "How many days until Friday? What day is it today?"

I don't think I've sung the days of the week song more at any time in my life than I have this past week! And whenever I'd try to make plans, she'd throw in something about being busy on Friday.

"We should go to the library. She would do that on Thursday or Friday?" I'd ask.

"We can't do it on Friday! I have my egg hunt, remember?" Miriam would say.

Or, "Oh! There's no school on Friday—we should go to the museum."

Good thing egg hunts only take five minutes of the day, though I'm sure Miriam would have loved to stay at her teacher's house all day long.

"They have a beautiful house," Rachel told Andrew during dinner.

"No, they're not," Rachel and Miriam said together.

"Sure they are," I insisted.

"No—they're always doing fun things. They're not calm at all," Rachel explained.

"Okay, yes. But I mean, their grandson was leading the whole group of three-year-olds on a screaming rampage through the house and they didn't even flinch—they just acted like it was normal to have five three-year-olds running amuck through their house!"

They were more calm about it than any of the parents were, that's for sure!

Anyway, we had a wonderful time! It's nice to be surrounded by such wonderful people!
Posted by Nancy at 12:38 AM