The girls were a little disappointed that the Easter Bunny didn't leave anything this morning. We're sneaky parents, though, and had their baskets all ready to go so after we sent them to get in the car so we could go to church we pulled out the baskets and quickly hid Easter eggs all around the house.

Miriam was the first one inside after church. She had picked a flower and was on a mission to put it in a cup of water as quickly as she could. She walked right past the row of Easter baskets on the bench without even noticing them. They had to be drawn to her attention. 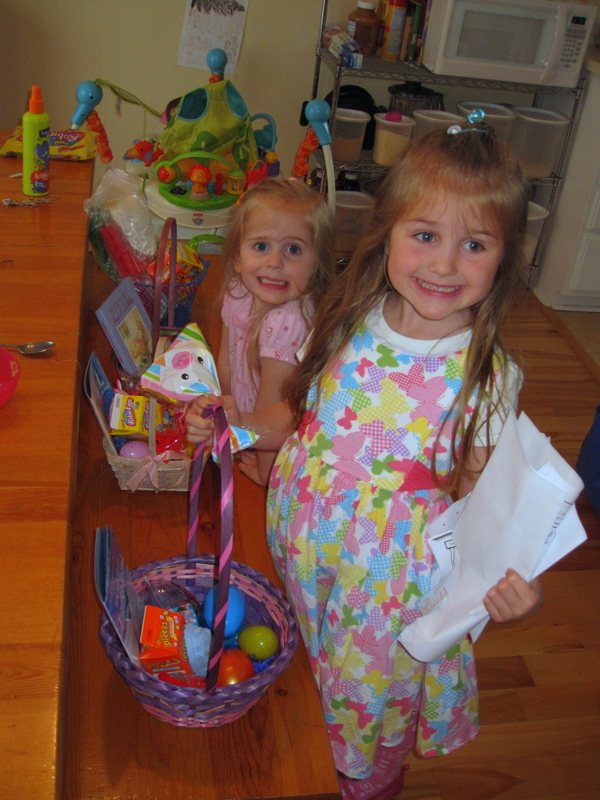 We got the kids goggles to use at the pool this summer, which they were rather excited about. 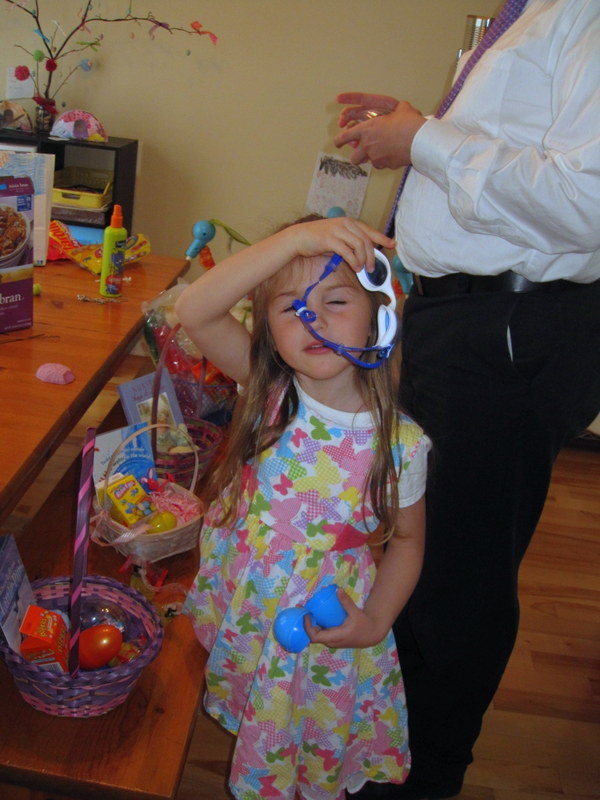 They each got a book. Rachel's and Miriam's came from boxes of Cheerios. Benjamin's came from the BYU bookstore. 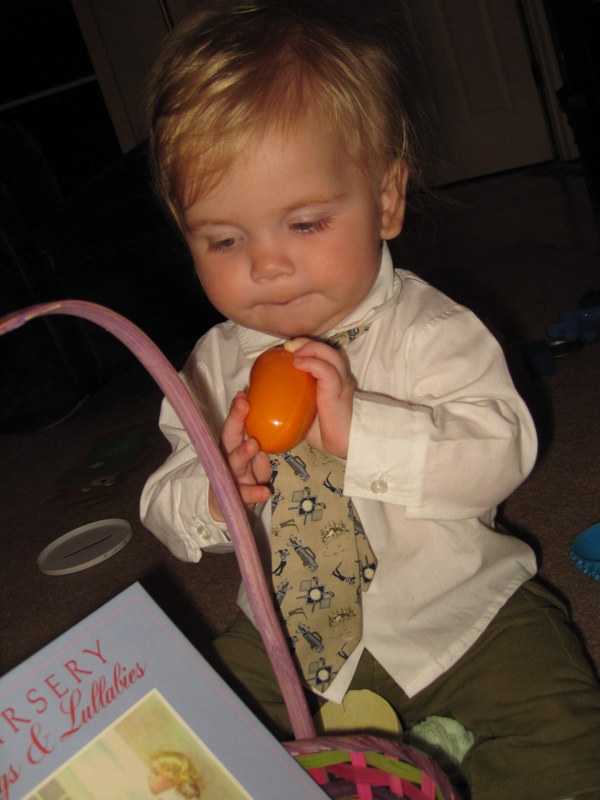 We gave them the Easter chalk that Aunt Shayla sent out at Christmas, some Hello Kitty bubbles that our next door neighbours accidentally purchased (I'm not really sure how but they said they'd rather give them away than waste the time and money returning them to the store), a whistle (from previous years that I found in our Easter stuff), a notepad (from their road trip out here in August), and some candy, of course. 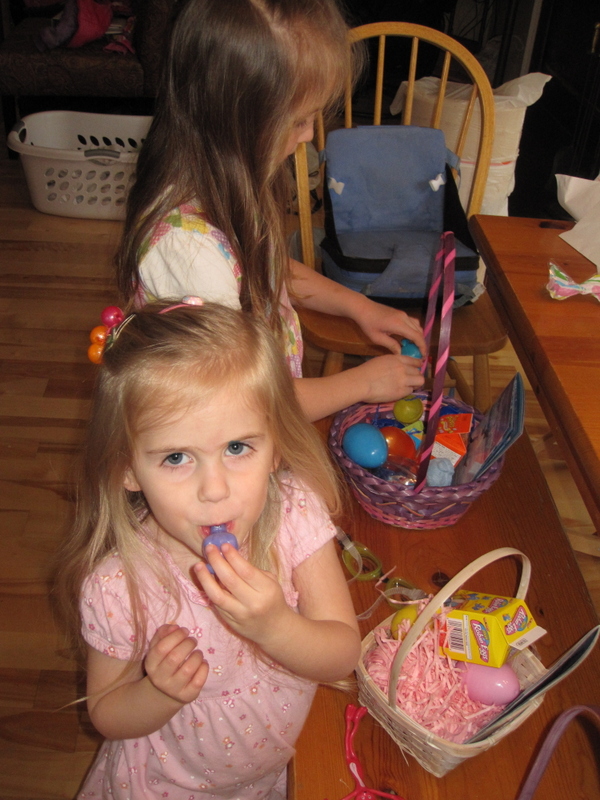 We also bought a jump rope kit so that we can make jump ropes this week (that was in mine and Andrew's basket). It came with rope, beads, and handles—you just string the rope with beads and then you have a lovely school-style weighted rope. Hopefully putting them together is as easy as it sounds... 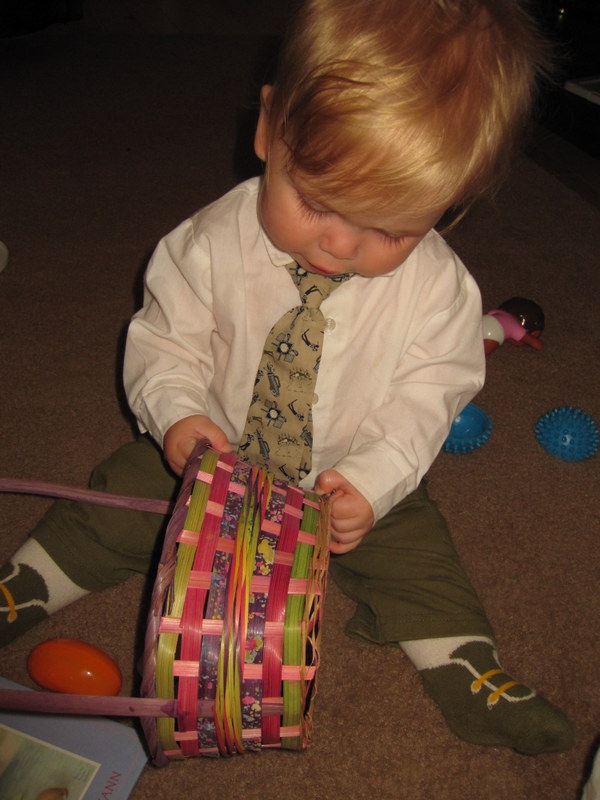 After exploring our baskets, Andrew pointed out to the girls that there were plastic eggs hidden all over the house (it was kind of a rainy morning so we couldn't hide them outside). The girls ran around the house filling their baskets to overflowing and then we dumped all the candy into a communal bowl.

The girls were in a hurry to get to the activity they really wanted to do—our annual Easter Egg Smackdown—so they only did a half-hearted job hunting eggs. We kept finding them all afternoon. Benjamin found one that we'd hidden (and forgotten about) on his bouncy chair and he had a grand ol' time shaking it in the air, banging it on his tray, and screaming his lungs out while bouncing up and down so vigorously that I couldn't catch a decent picture. 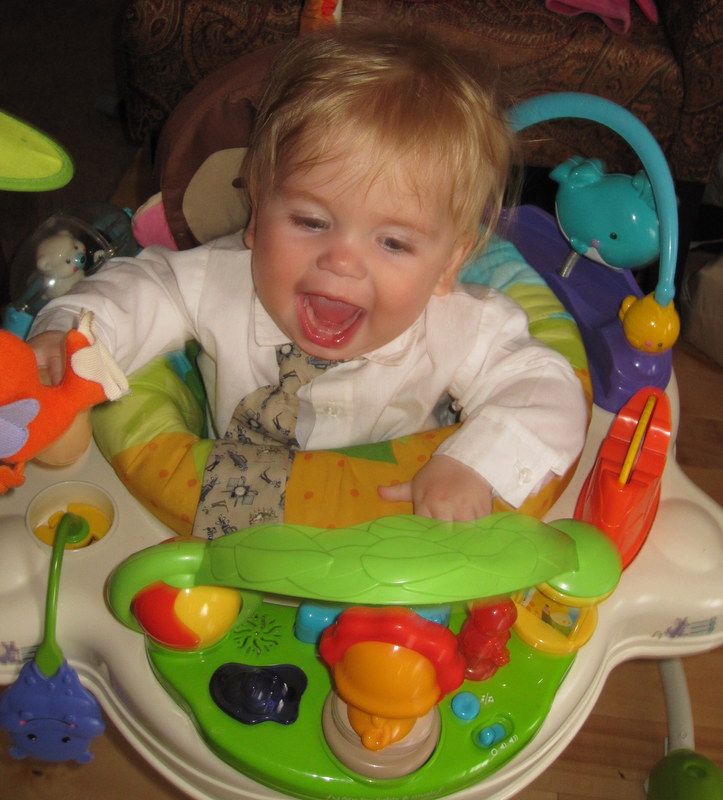 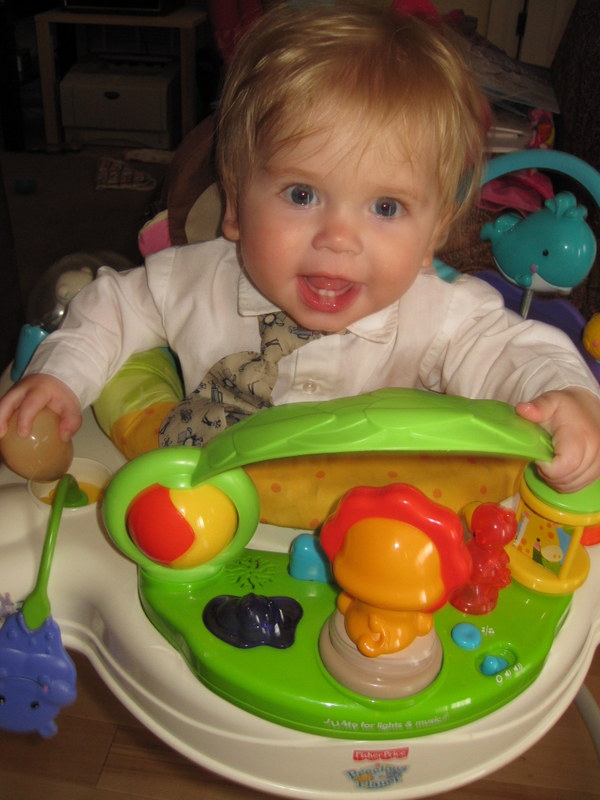 We took it away from him before he popped it open. Fortunately it was a difficult-to-open egg rather than a pop-open-if-you-look-at-it-funny egg. Not all plastic eggs were created equal. Nor, for that matter were chicken eggs.

Here's our bracket for this year: 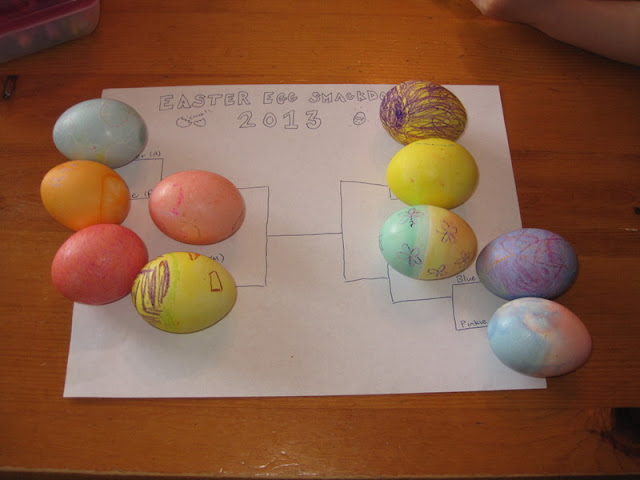 We only had ten eggs competing because two of them were already thoroughly cracked. Crookshanks, made by Rachel, was the complement apparent to the Scabbers egg I had made. Unfortunately Crookshanks had a thumb-sized crater in his backside and was disqualified from participating. Rachel wanted him documented though, so here he is: 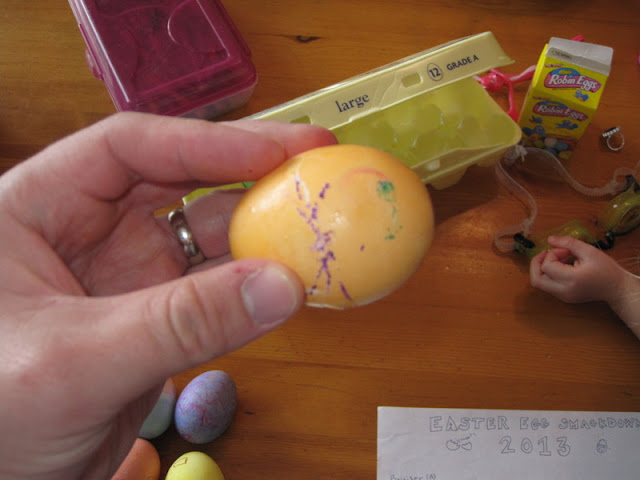 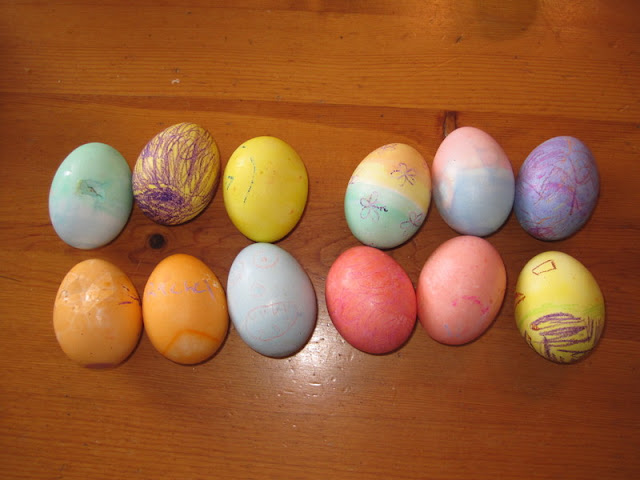 The competition was riveting. 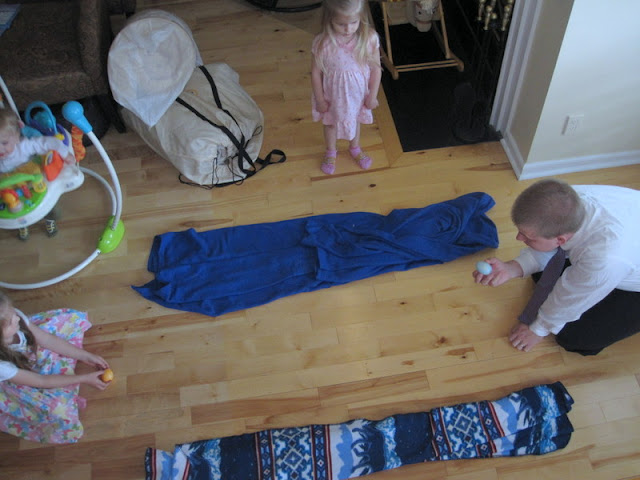 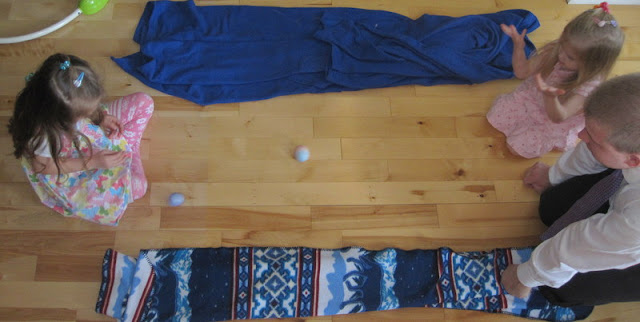 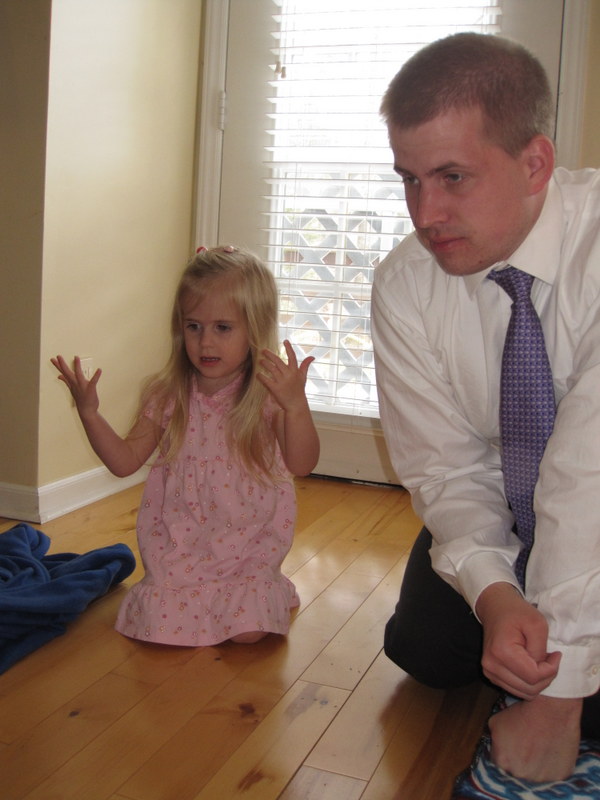 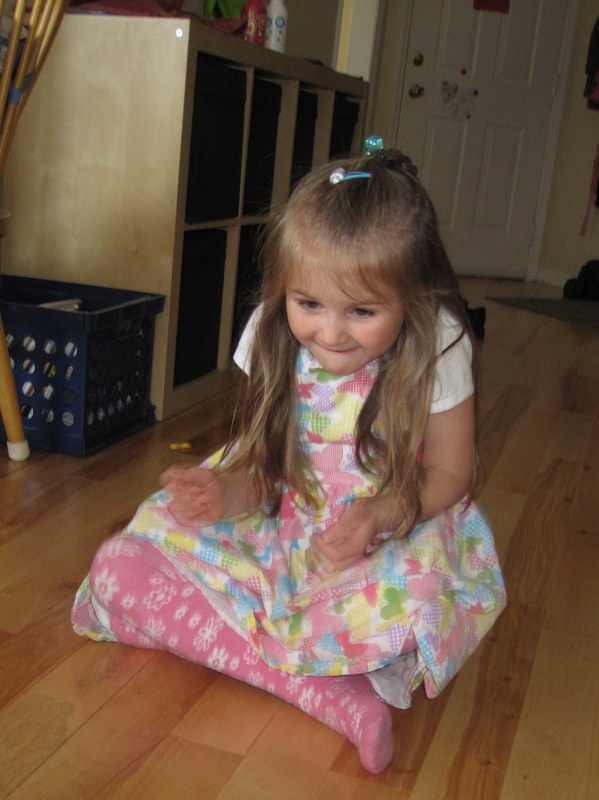 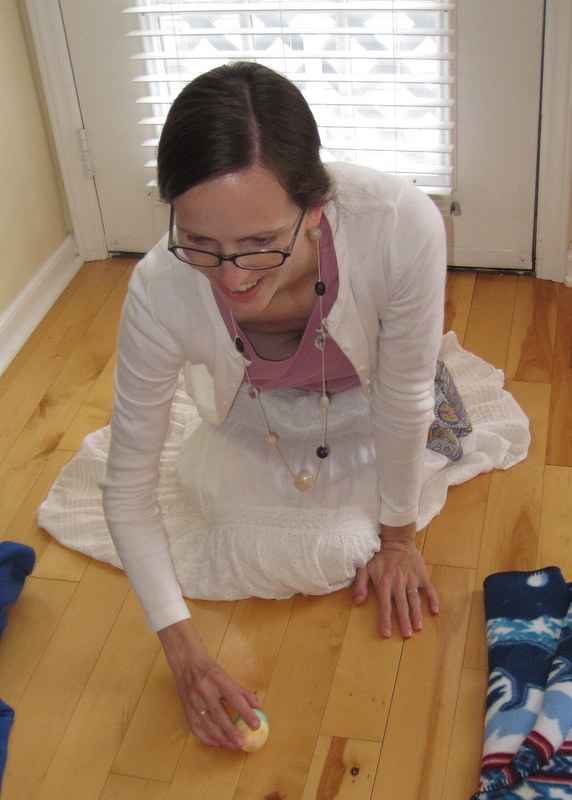 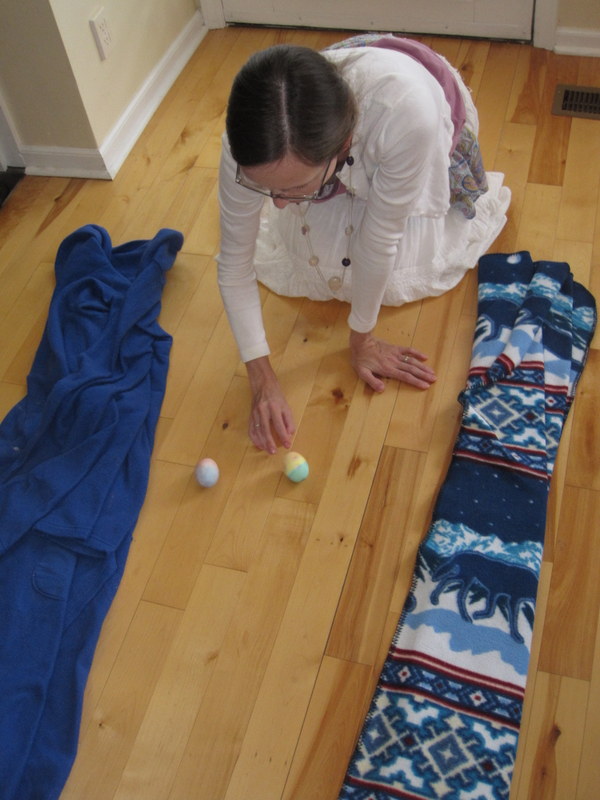 In the end we had Ninja (Rachel) pitted against Jellyfish (Miriam): 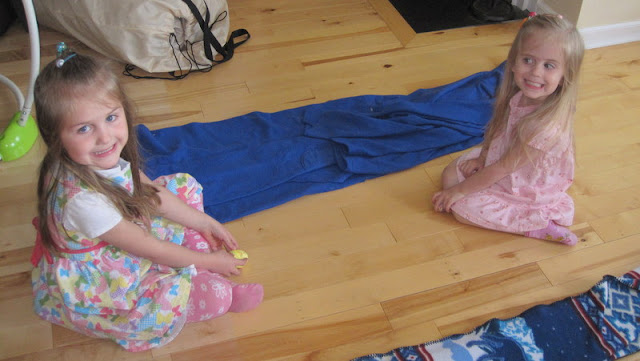 After several false starts and even more complete misses, Jellyfish finally shattered Ninja's shell to take the tournament without even a crack: 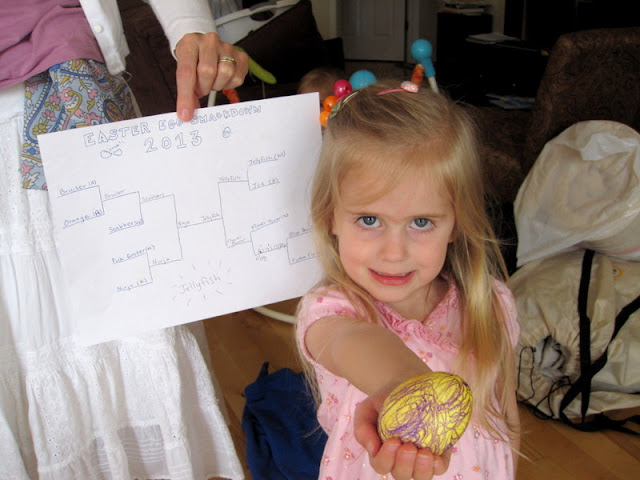 We had egg salad sandwiches for lunch, obviously.

Except for Benjamin, who had baby food. Isn't he cute in the bib my cousin Shannon made for him? On Monday we had a Family Home Evening lesson on the real reason for Easter and the girls made little dioramas of the tomb, which we put under our egg tree. 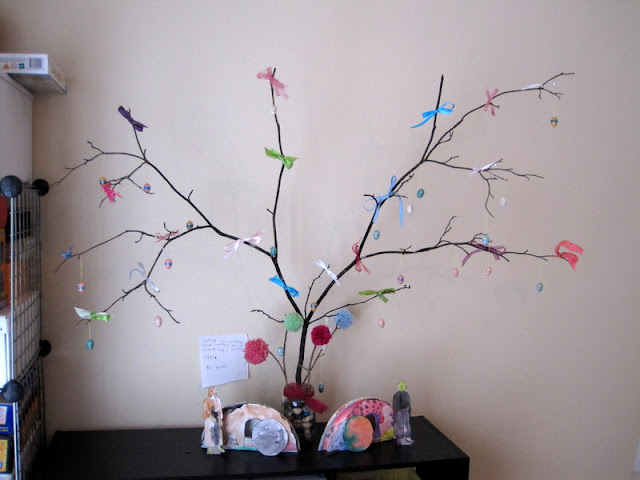 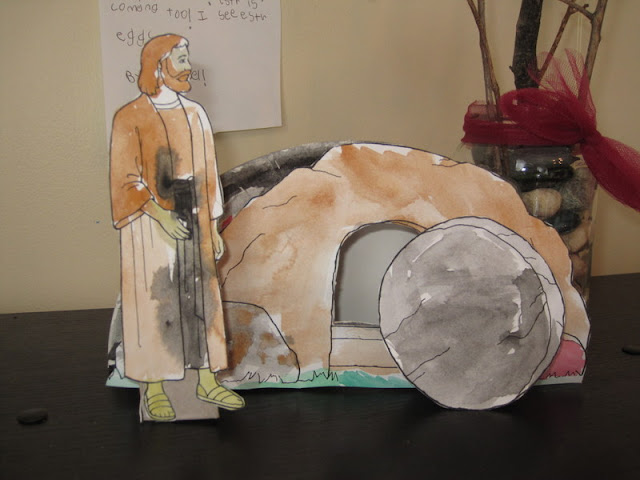 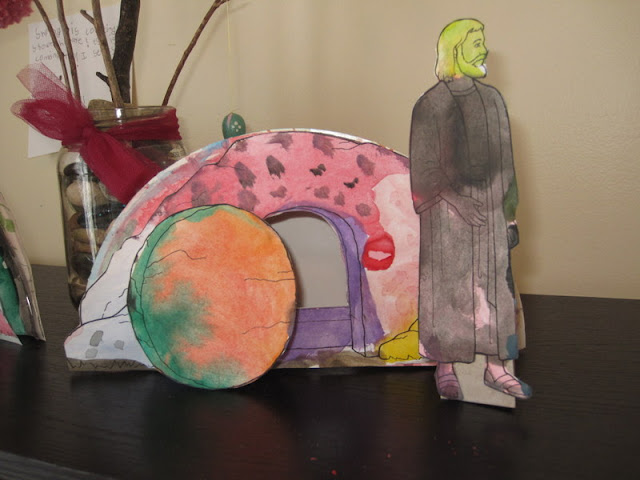 We admired them during lunch while we talked about what we'd learned at church this afternoon. Naturally, everyone had talked about Easter, Christ's life, and his atonement and resurrection, so that's what our conversation included.

After lunch we went outside to take a new picture for our blog header. The family pictures we took this fall were great, but none of them were landscape-ish enough to fit on the header.

So this is the one we ended up with:

And these were the contenders: 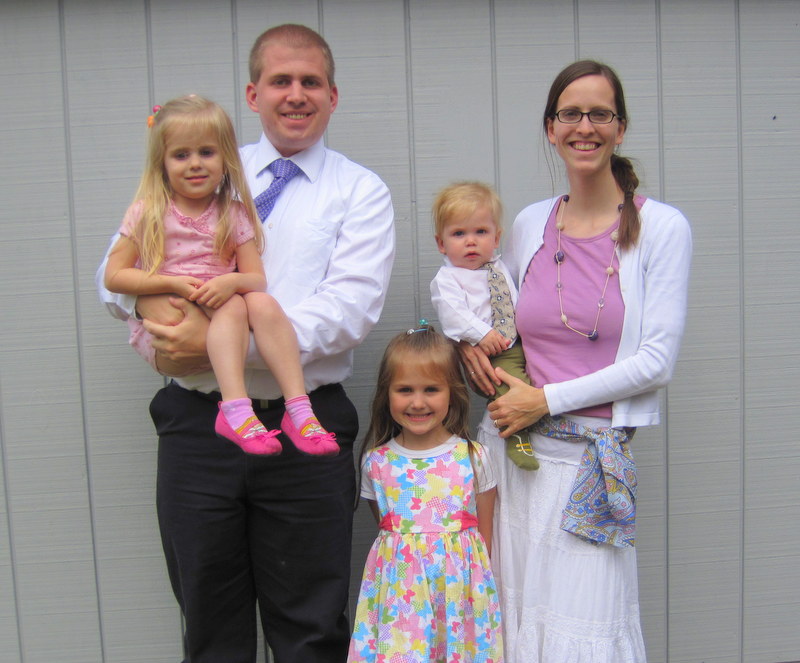 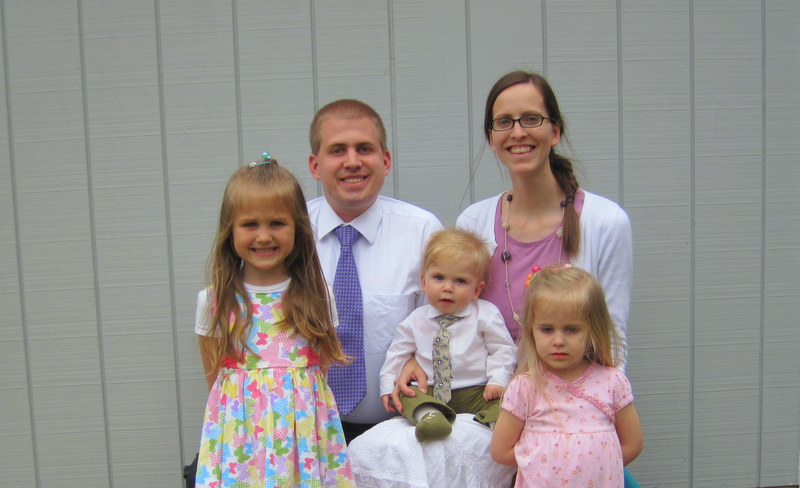 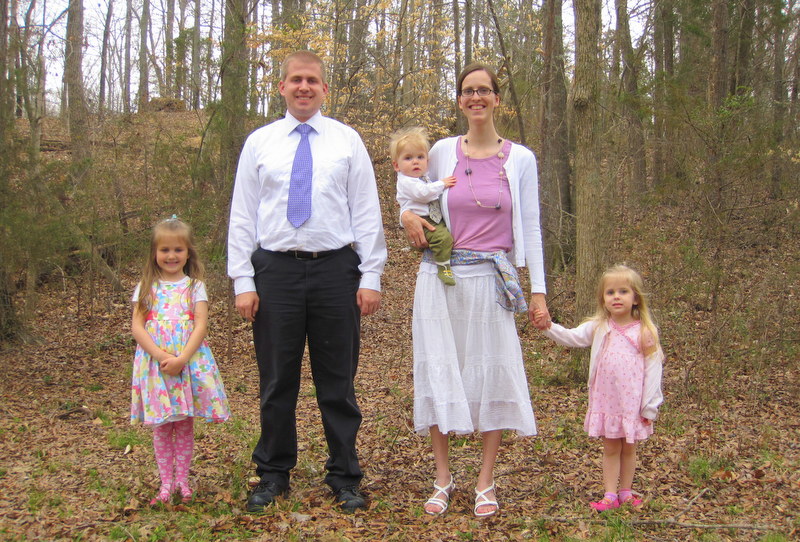 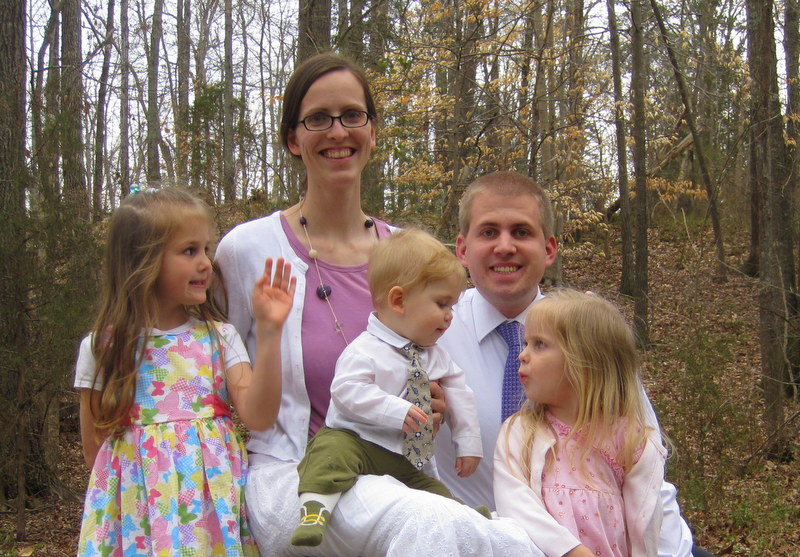 It was a good, happy day. The girls lauded it as "the best Easter ever!" but I'm sure they'll claim that every year until they turn that magical age when everything is suddenly lame. Until then we'll enjoy their enthusiasm.
Posted by Nancy at 11:51 PM