Today Benjamin inherited a fabulous rocking horse from my friend Kim. I don't think he's even aware it's a horse but Benjamin loves it regardless. 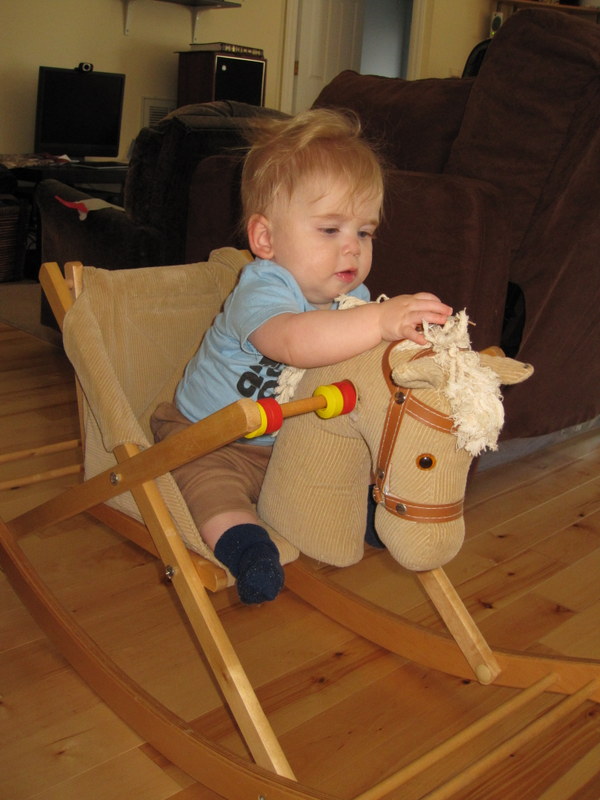 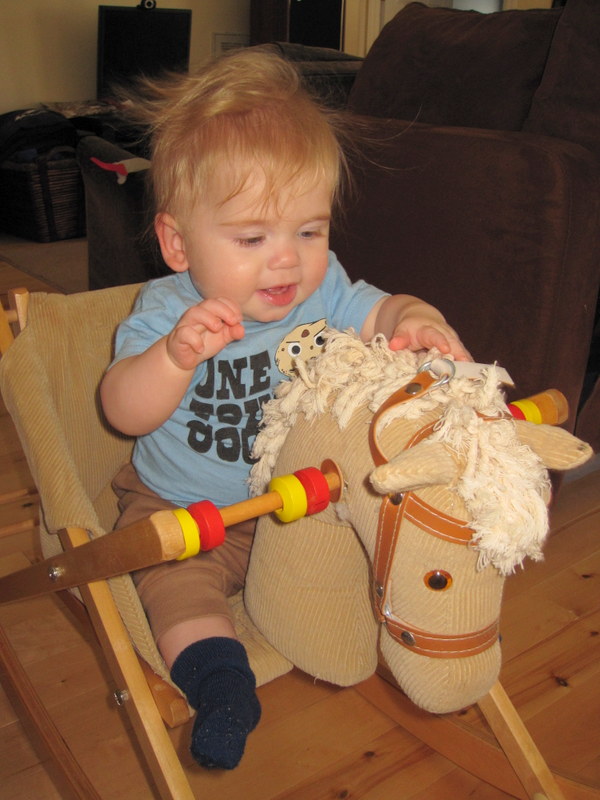 Let me back up, though, and tell the story of how and when I got the horse.

This morning I bundled up the kids and we walked to Kim's house for her cleaning party. Her house goes up on the market tomorrow and she's been a little stressed out about getting it ready (she has a newborn baby, had an appendectomy a few months before the baby was born, her husband's been busy doing job interviews and things so their house has been a little topsy-turvy).

I think cleaning parties are the way to go, personally. No one has time to scrub their kitchen cupboards when they're getting ready to move whether they have a brand new baby or not!

It was a pretty fun party. In total we had seven women working and things went quickly and smoothly (in spite of three of us having babies strapped to our fronts/backs and the six preschoolers wandering around the house). We'd just finished all that we could do for the moment and our party was slowly disbanding. We were down to five women, two babies, and five little girls when Kim asked if anyone wanted to take home some of their unwanted treasures. A few of us wandered into the garage to look at the stuff Kim wanted to get rid of—I claimed the rocking horse, Heidi claimed the picnic table—while a few stayed inside doing some finishing touches.

From outside we heard the vacuum going and Kim wondered aloud who was vacuuming what since we'd called it a day. She loaded the rocking horse into her van because I wouldn't have been able to walk home with the rocking horse, the stroller, and two kids (Andrew had the van) and I went inside to find Miriam.

It was Stephanie who was vacuuming.

Our five little girls had found a mirror in the dining room, that was balanced against a chair (still in its box, brand new) and their little fingers had gotten too curious. They knocked the mirror over and it shattered. Fortunately, no one got hurt—there was no blood, no need for stitches—but that half circle of sweet solemn faces, staring at that broken mirror was priceless. Those little girls were quite shocked by what they'd done—or at least by what had happened. None of them were quite able to communicate how it happened.

I went back outside to find Kim. She was just saying goodbye to another sweet friend who'd arrived to help a little too late.

"So, what's up with all the vacuuming, anyway?" Kim asked.

"Oh, there was a little accident inside. You know that mirror that was balanced against the table in the dining room? Yeah...one of the little girls knocked it over and it shattered everywhere so Stephanie's just cleaning it up."

"Well, yeah. I mean, no one's bleeding so your carpet's still clean."

"And no trips to the ER," she pointed out. "I see what you mean by little accident. Tell everyone it's no big deal. The mirror came from the dollar store. It was a cheap one."

She was just going to use it as part of "staging" her house but then decided not to and was going to return it. She handled it all so calmly. But then, one of the little girls staring with wide eyes at the broken mirror was her own so she knows exactly how little kids can be.

So, Kim was down one mirror. We were up one rocking horse.

Benjamin spent the afternoon sitting in it outside while Miriam played with Claire (Kim's daughter, who joined us for the afternoon). He's so cute in it. 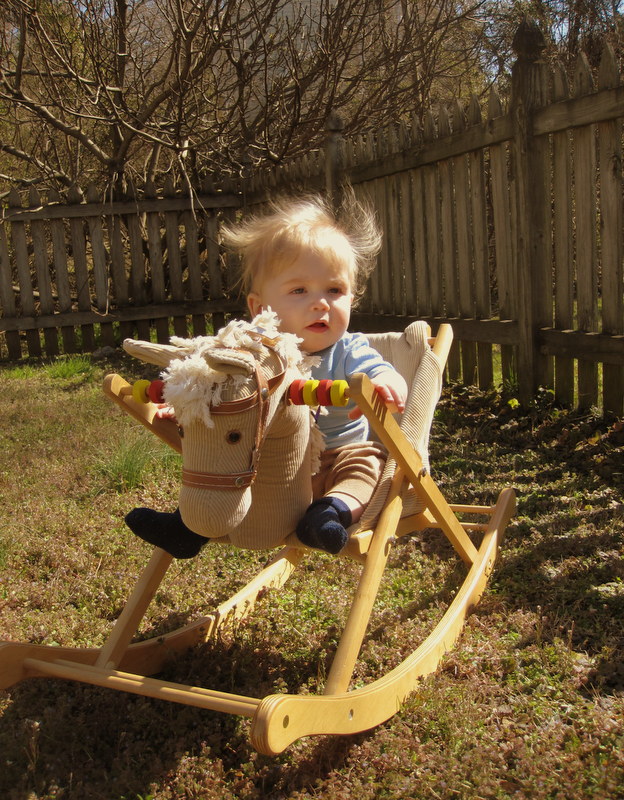 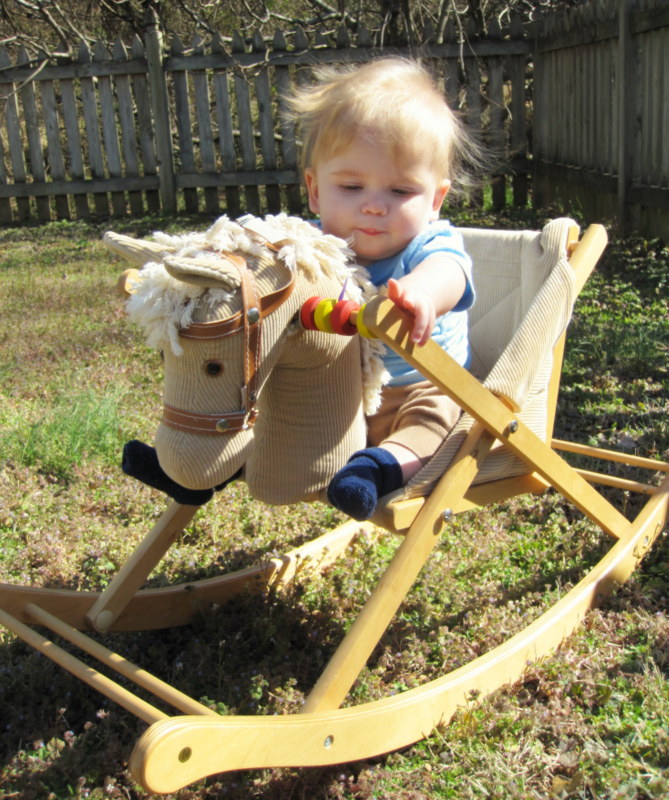 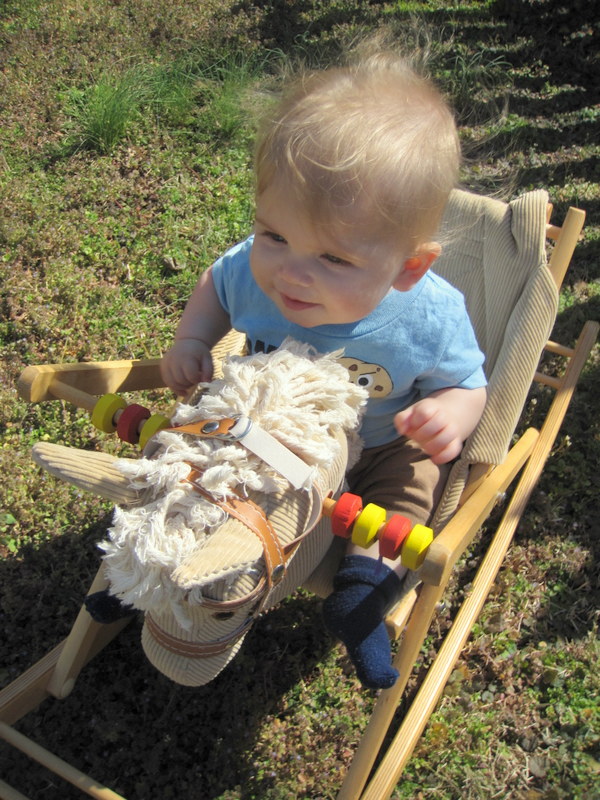 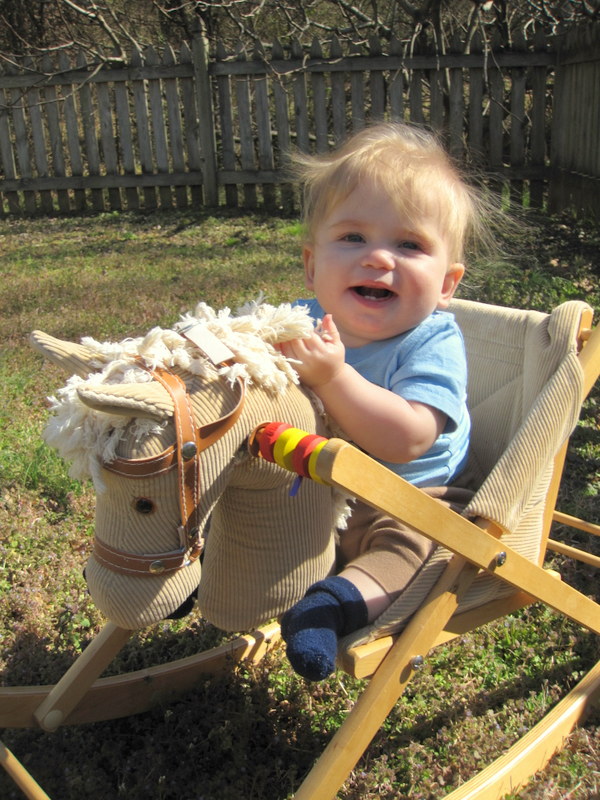 After Claire went home, Miriam got out her rocking...thing so that she and Benjamin could ride together. He was quite jealous that her rocking thing was red and shiny but I think one day he'll appreciate that his rocking thing was an actual horse. Like, maybe when he knows what a horse is. 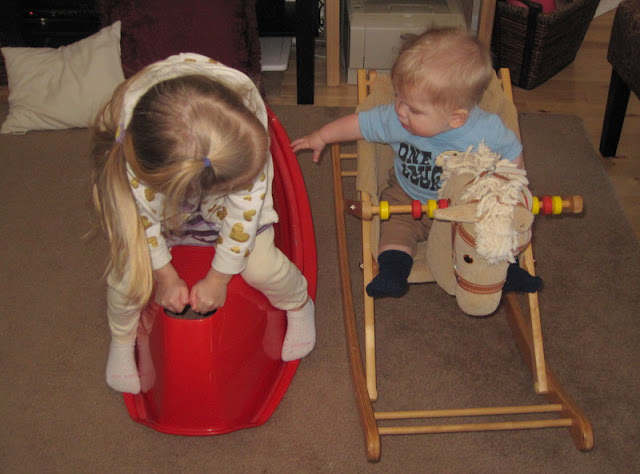 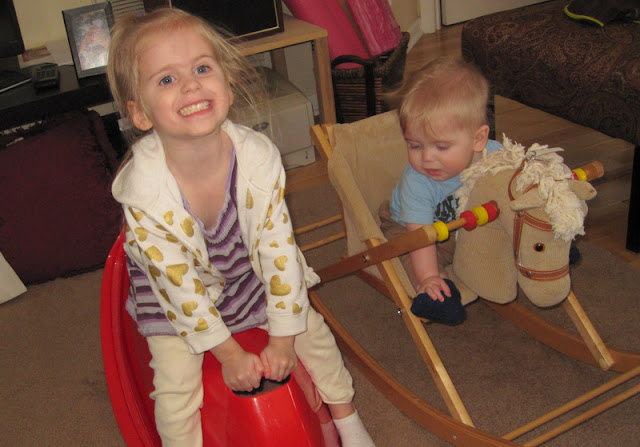 Miriam's actually rather jealous that his is a horse, but that doesn't mean they can switch because Benjamin is too little to use Miriam's (though she might be able to use his). When Andrew got home Miriam was telling him all about Benjamin's new horse and said, "But I don't even need a horse because watch this!" She got down on her tummy and folded herself into bow pose and started rocking back and forth. It was pretty funny.

For family home evening tonight we learned about The Armor of God (Ephesians 6). We raided the recycle bin and made a complete set of armour out of paper and cardboard boxes. Then we wadded up paper balls to throw at whoever was wearing the armour so that they could wrestle against "the darkness of this world." It was awesome...until the kids decided it was my turn. 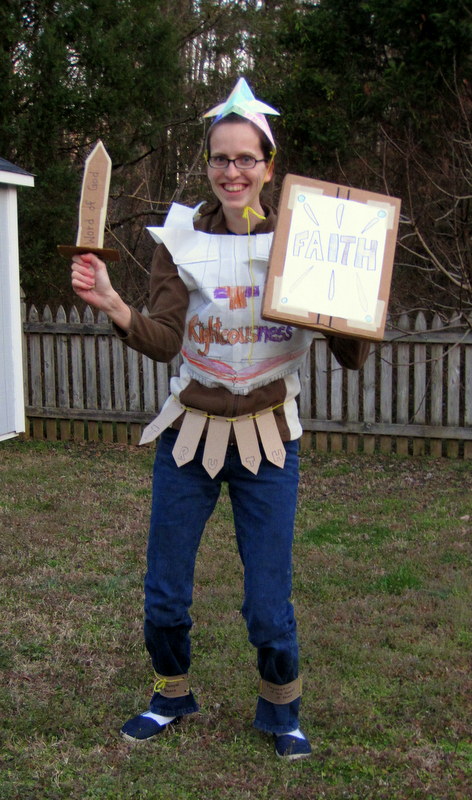 It looked much cooler on the girls, though Miriam refused to allow us to throw any wads of paper at her (too scary). 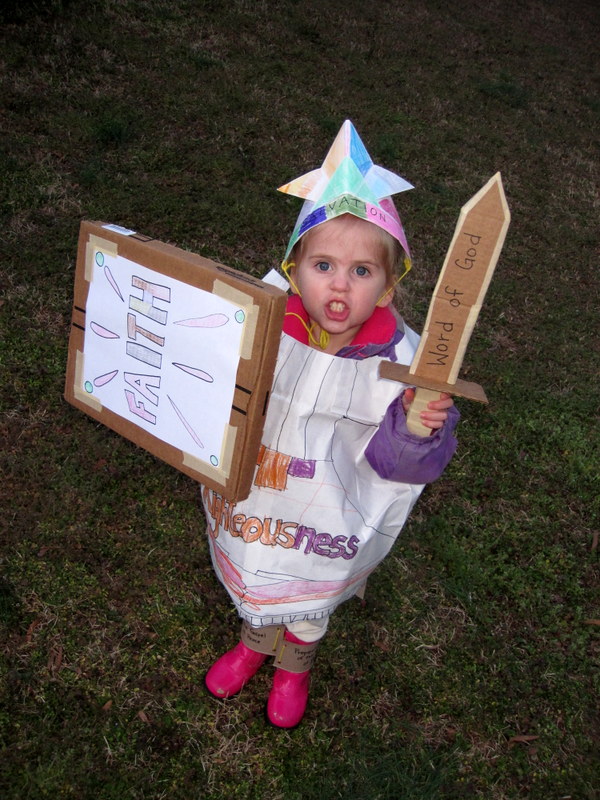 We had a ton of fun throwing paper wads at Rachel. 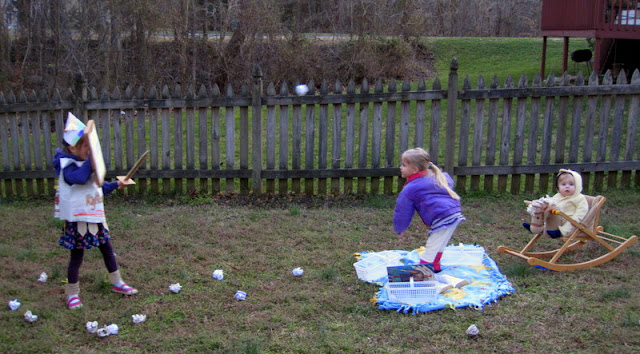 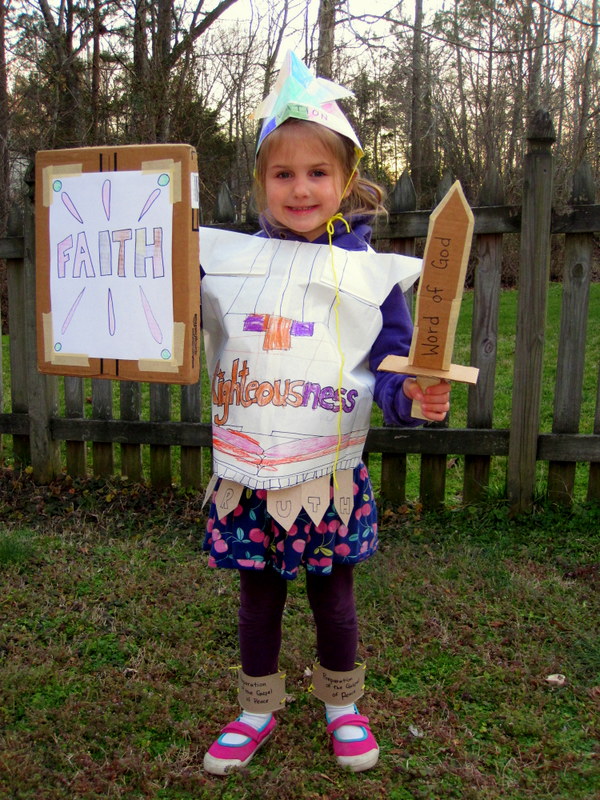 Benjamin even got a turn, though he didn't quite put on the whole armor of God he did fight the powers of darkness on his horse. Unfortunately, the object of the lesson was lost on him because he didn't understand that he was supposed to block the paper wads so he didn't and instead let them hit him, which was hilarious. Whenever he'd get one in the face he'd scrunch up his face for a second and then dissolve into a fit of giggles. 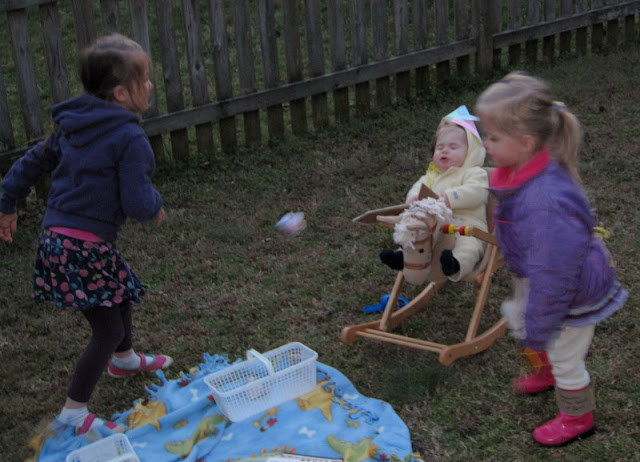 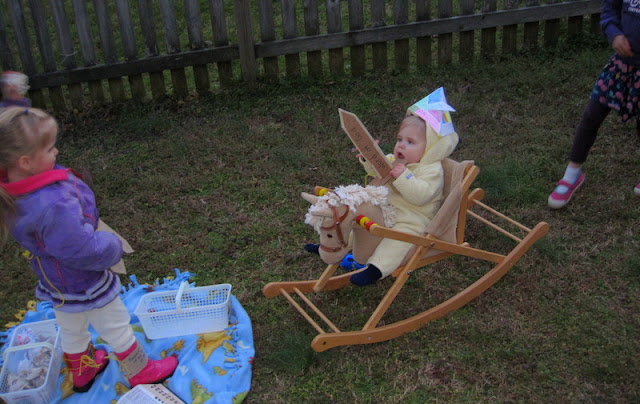 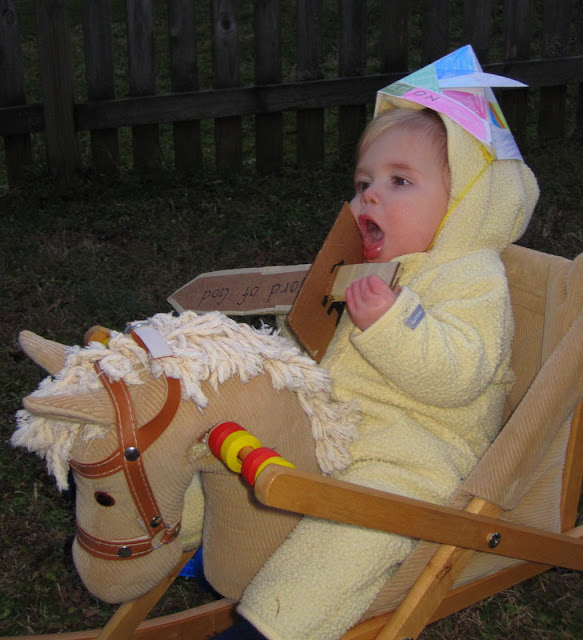 All the while we were in the backyard having a grand ol' time, Andrew was inside not having a grand ol' time. He's been hit with the norovirus that has been floating around. They (that ubiquitous group) think the virus on UNC campus might have aerosolized, which means that it could be spreading by coughing (unlikely since it's from fecal matter) or flushing the toilet (eek!). Andrew said he did use the bathroom on campus today (he's taking a class at UNC this semester) so my guess is that some norovirus took flight when he flushed and landed on his lush mucus membranes, quickly making way down to his stomach/intestines where havoc was quickly wreaked.

I'm now biding my time until the rest of us get hit with it. It seems to be making the rounds. *sigh*