Yesterday after the pig pickin' we spent a long and frustrating afternoon trying to figure out how to ride our bikes. Rachel was the most frustrated of all and I was in close second. She would yell at me every time she fell off her bike as if it were my fault that gravity is a thing. Eventually I told her that bike riding time was over and then I went inside and told Daddy that we'll be looking into training wheels.

He swears that it's possible to learn how to ride a bike without them. I think he's failing to calculate the possibility that [she inherited my complete lack of coordination] into that equation. 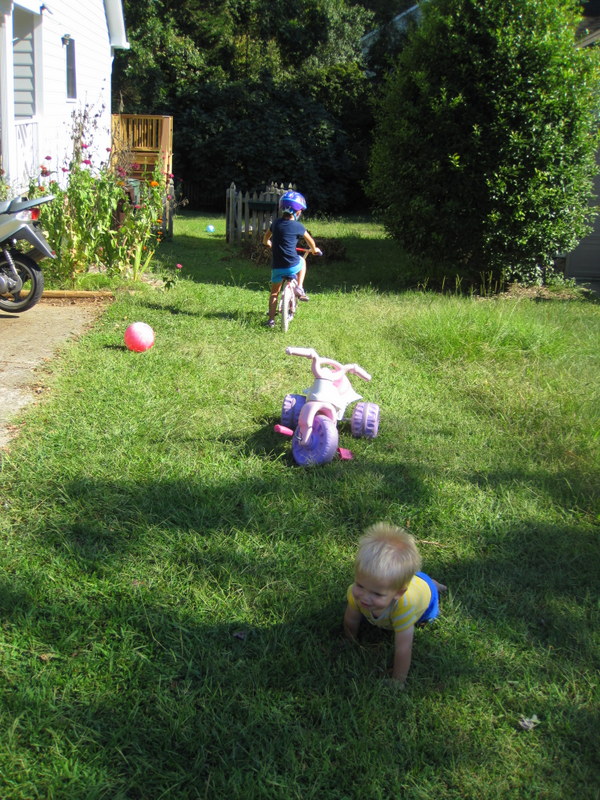 She wants to ride and she just can't. In fact, she's never successfully pedaled a bicycle in her life. That little pink tricycle between Rachel and Benjamin? That was a gift from her Auntie Kelli (slash a hand-me-down from her twin cousins) for her third birthday.

Rachel never pedaled it. Even though her feet reached the pedals she'd always just sit on it and walk it along with her feet.

This bike that Benjamin's trying out? 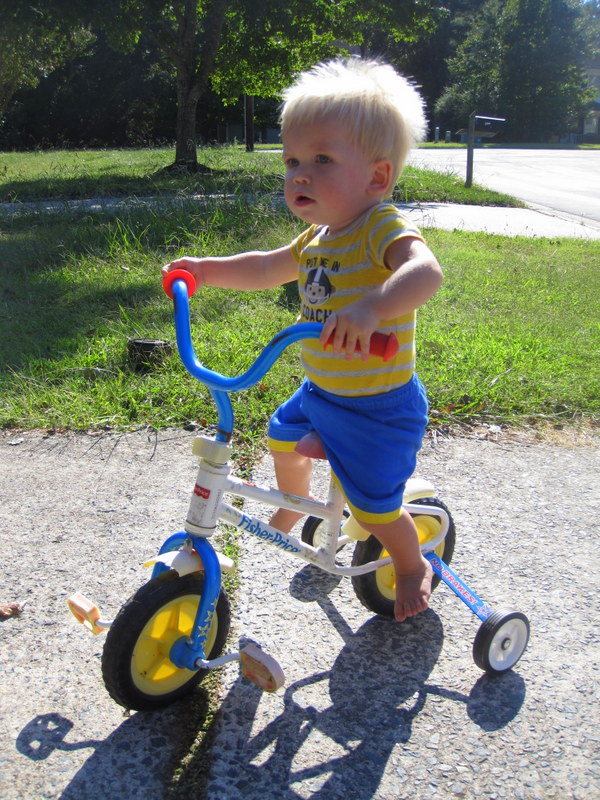 We picked it up from craigslist super cheap. Rachel can pedal it now that she's six but she looks a little ridiculous on it. She rode it for a bit at three and four and five but never well. Not at all. But the fact that she can ride it now is encouraging. It makes me think that if we just popped some training wheels on her bike she'd at least have mobility—and when the neighbourhood kids are out riding their bikes and scooters on the street she could actually join in the fun. 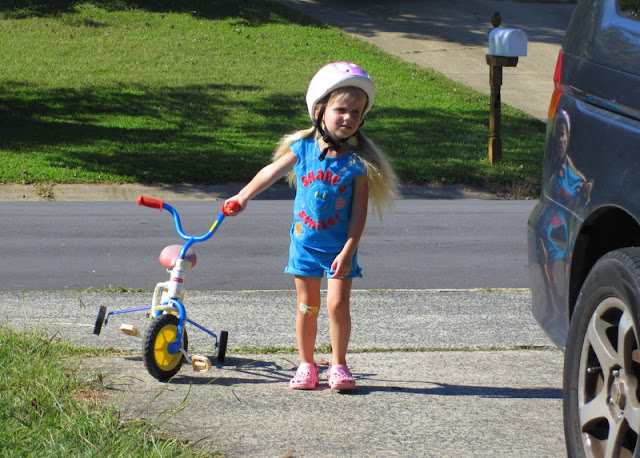 Miriam's not great at biking either, but this fact is made less embarrassing by the simple trait of being three. She can pedal backward (fortunately this bike doesn't have brakes so pedaling backward makes the bike move backward instead of stopping it) but really struggles going forward. She doesn't even care yet because the four-year-old across the street is still stuck on a tricycle, too.

I don't think I should be the one to teach my kids how to ride a bike. I'm sure one day they'll get it but I don't think it will be under my tutelage. Rachel wants to learn so bad but she's just plain awful at. She doesn't even have to be on the bike to fall off of it. She just has to look at it wrong and it will knock her over and jump on top of her. She falls over all the time. This makes her grumpy and it makes me grumpy and grumpy people simply don't learn well (I'm pretty sure that's been scientifically proven).

To her credit, Rachel keeps on trying. With her tenacity, I'm sure one day things will click. But until that day comes she might be rocking a new set of training wheels.
Posted by Nancy at 11:20 PM