Benjamin, however, was tongue-tied as an infant. I stuck my tongue out at that boy until I was blue in the face but he never once returned the favour. It was obvious why he wouldn't when my mom pointed out he was completely tongue-tied. We had his frenulum clipped shortly before we moved out here (the day we loaded up the moving van, actually), but up until this week I had never seen him stick out his tongue, so tongue-sticking-out is a new, exciting, and rather hilarious game at our house right now!

It's not unusual to hear Benjamin humming, "Mmmmmm!" while he's slapping my legs. When I look down, he'll be looking up at me with his little tongue poking out and he'll keep on mmmmm-ing at me until I stick my tongue out, too.

Last night we were playing this game before bed. 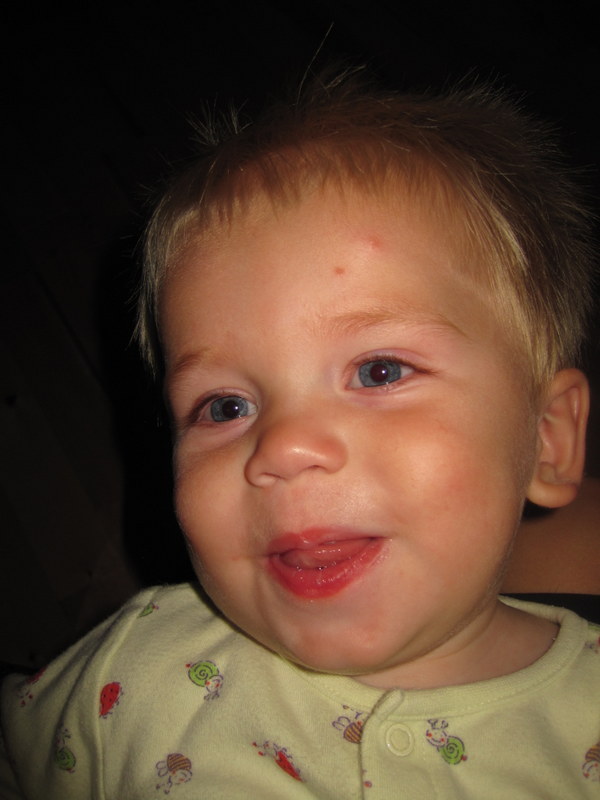 Benjamin kept having to stop playing to laugh about the hilarity of it all. 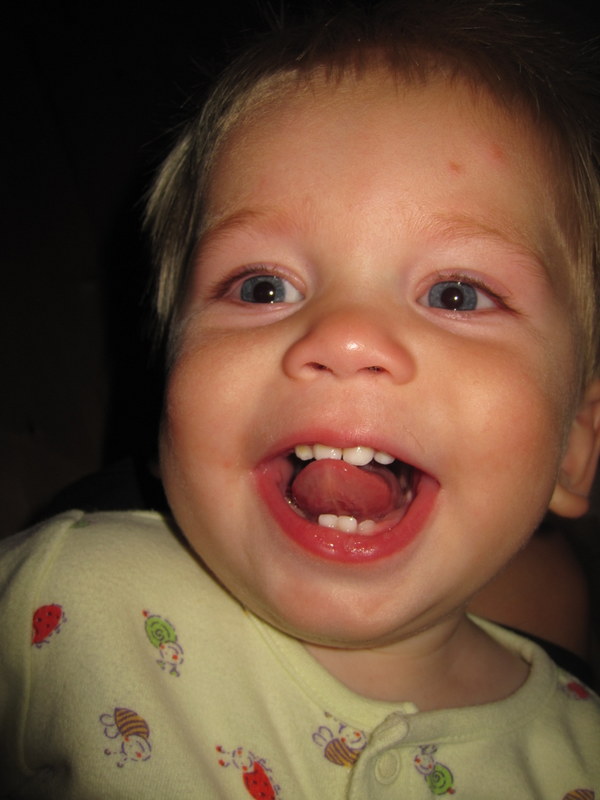 The poor boy could hardly keep a straight face! 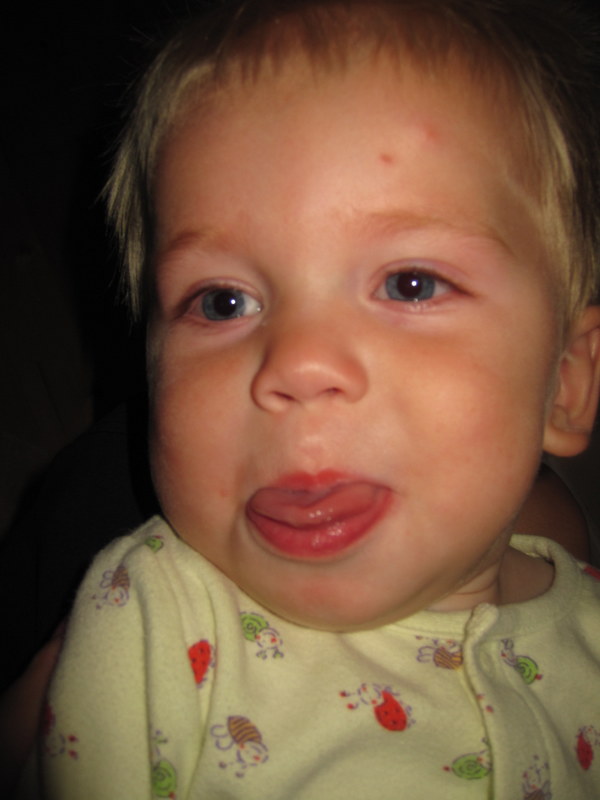 Usually he looks 100% like a mini-Andrew, but last night when he kept sticking his tongue out at me I suddenly saw a little resemblance to my side of the family—Malachi. There is an image of Malachi seared into my brain in which he's making the exact same face: sticking out his little tongue while fighting his laughter. I looked for that picture but I can't find it anywhere.

I've only seen Malachi a handful of times. I went up to help my sister after he was born, as his birth had been quite traumatic for the both of them (with blood transfusions for her and brain hemorrhaging for him) and she had a two-year-old and a three-year-old to deal with as well. He wasn't into sticking his tongue out very much then and instead was into having his head circumference measured regularly and periodically having to be rushed to the ER because he'd stop breathing and turn blue.

Andrew and I went up to Alberta in 2006 with my mom and sister Josie for my cousin Heather's wedding. I looked through those pictures but couldn't find the one I was thinking of, but I did find this one...

We went up again in 2007 for my nephew Declan's baptism. I looked through all of those pictures but couldn't find the one I was thinking of, though I did find one with Malachi's tongue sticking out...

The last time we went up was a couple of years ago for Malachi's baptism. I looked through all of those pictures as well and couldn't find the one I was looking for, though I did find a one of Malachi holding some laughs inside...

But I still haven't found what I'm looking for. I'm positive there is a picture around somewhere of Malachi making the exact same face as Benjamin. I'm equally positive that that picture is not in my archives.

Sometimes it breaks my heart that I live 2500 miles away from my sister and her kids (and that she lives 1000 miles away from our parents so even if I chose the shorter distance ("only" 2000 miles) to visit my parents I still wouldn't necessarily get to see her). We hardly ever get together and are missing watching each other's children grow up. It was fun, though, to see that glimpse of a young and impish Malachi grinning at me from behind my own baby's eyes.

My mom's family still does a gigantic family reunion every other year for my mom's grandparents and while I love the idea of that, do you know what idea I love more? Having a reunion for my grandparents because I don't think all the cousins have ever been in the same place all at once. I can't even remember the exact time all my siblings were all together—I'm sure it's been over a decade. I think we need to plan something. Who's with me?
Posted by Nancy at 10:17 PM