Today was the last day of school before Rachel's fall intercession. At home we spent the day reading books, playing with blocks and cars and princesses, and doing laundry.

Benjamin is obsessed with animals lately. I think that's fairly normal at this age. Sometimes I get a little anxious about his language development because it seems like the girls had a bunch of words under their belt by this age and Benjamin simply doesn't. He'll say mama and dada. He'll occasionally specifically ask for a nuh-nuh (a nursing session). And that's about all. He isn't interested in signing things—except, apparently, "fish," which he picked up on at a friend's house, but that fits with his love of animals. 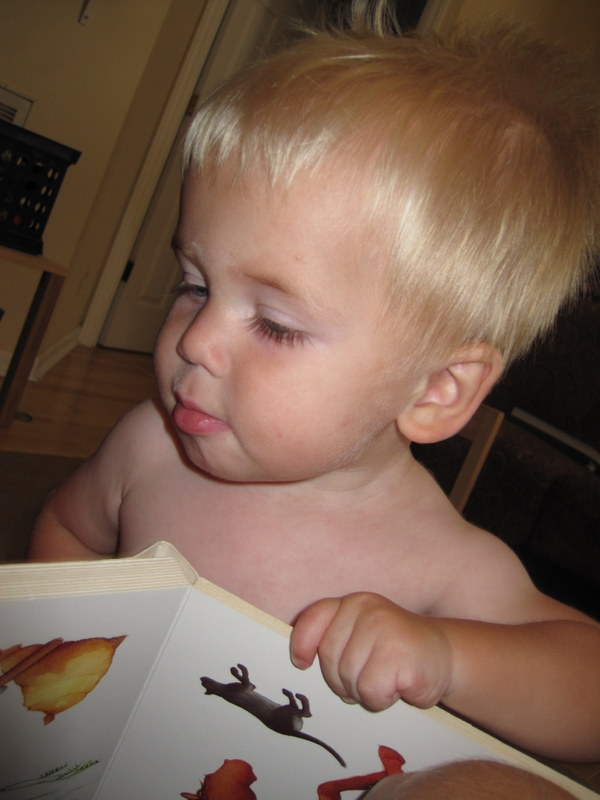 He gets very excited about dogs when we go walking and will even point and "arf" at them. Sometimes I can get him to moo for a cow (he did today while we were reading the book he's holding in the picture). And today while we were walking he actually pointed to a butterfly and said, "BUH!"

Butterflies are probably his favourite thing in the entire universe.

That sums up his entire vocabulary. And, like I said, he won't sign anything officially, but he does have his own complicated language of charades.

Whining and pulling on his diaper means he either needs to go potty or needs a change. Today he was very good about telling me before (or in the middle of) going pee and we were able to go on the potty lots of times.

Bringing me shoes—anyone's shoes—means he wants to go outside. Also, pointing at the door. Also, crying at the door. He's always up for a trip outside. He's kind of like a puppy in that regard.

He's really not unlike a puppy, is he?

Lifting up my shirt or pulling down my shirt or pounding on my chest with his hands typically means he'd like to nurse. Often he'll nod his head up and down while waggling his eyebrows while he does this as if to say, "Yes, yes! You do want to feed me, don't you?"

If he's not at the table, he'll scavenge and bring me whatever it is he wants to eat...all day long. Today he kept asking me to open the off-brand grape nuts. He brought me the box every five minutes, it seemed. The box even got thrown into the dryer. I wasn't about to feed him grape nuts though. Can you image the mess? 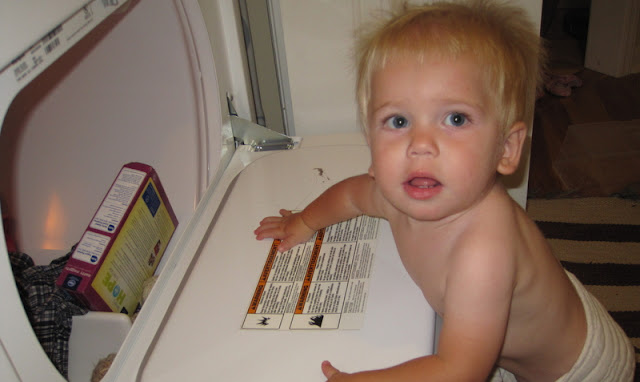 He's pretty good at getting his message across and hopefully soon we'll hear some more words coming out of his mouth, until then I'll continue to remind myself that if he's two months behind where he should be developmentally that that's normal. He seems to be in the normal range of language development for now, and he's a boy so if he's on the "later" end of the normal range of language development that's probably alright. But we'll keep a close watch on him...

Anyway, when we were finished folding the laundry Miriam wanted me to load her up "like Rapunzel," with stacks of clothes balanced on each arm and on top of her head. 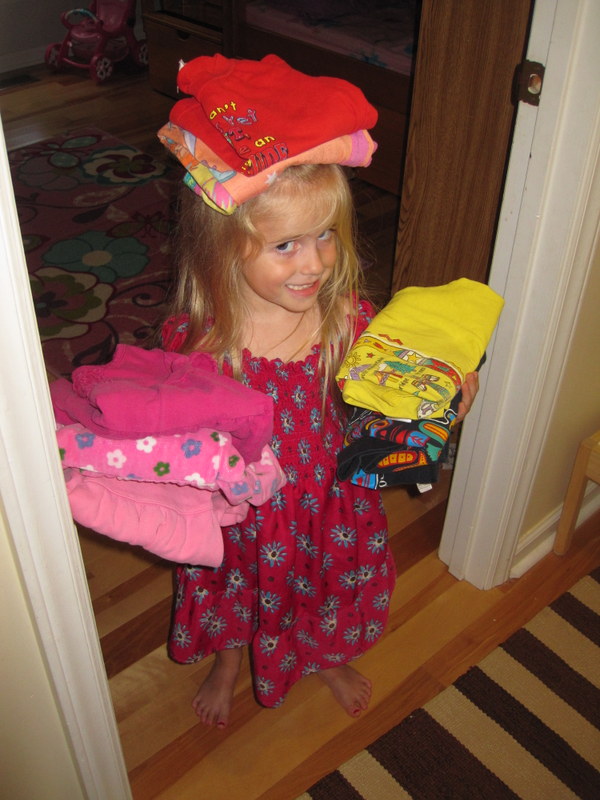 Not to be outdone, Benjamin picked up a pair of shorts, put them on his head, and followed us into the bedroom. 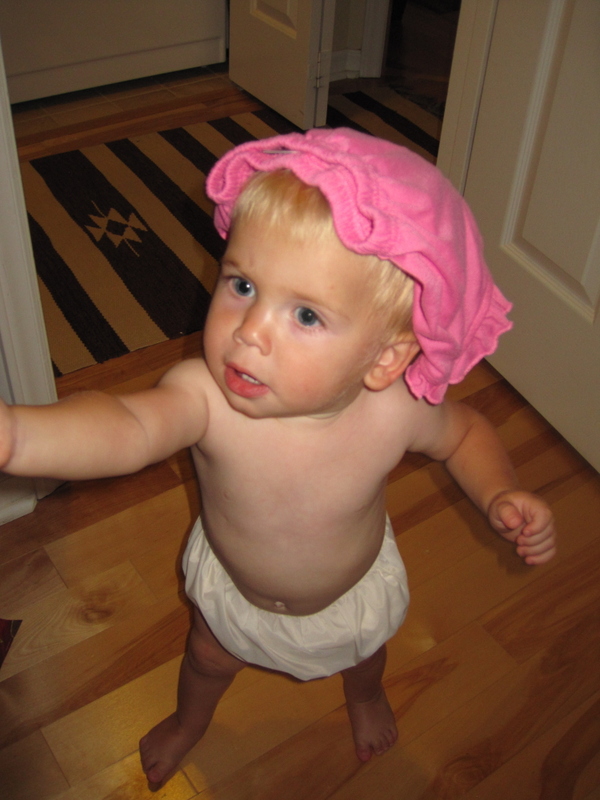 He adores following Miriam around. Sometimes she enjoys this and other times she does not, which means that sometimes they play very nicely together and sometimes Benjamin gets the bedroom door slammed in his face (literally). Today they played with the Disney sets quite nicely together. Miriam gave him pieces whenever he wanted them (which was mostly whenever he saw her doing something cool with them). I've read "articles" about action figures curtailing creativity, but Miriam's story lines are nothing like the actual shows so I'm not too concerned about her toys stifling her creative mind. 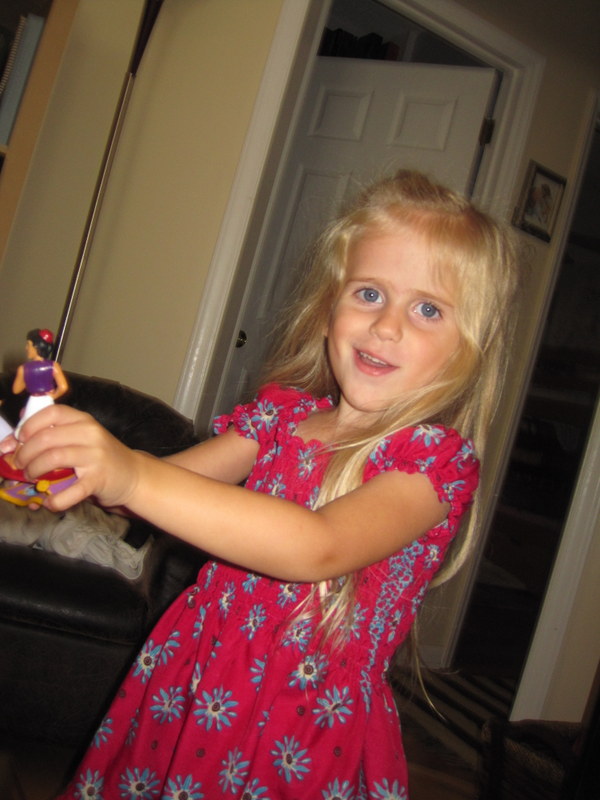 Benjamin's stories are much simpler. So far he knows that things are supposed to talk to each other and that they're supposed to hop up and down when they talk. He'll dance the characters around while babbling for them. 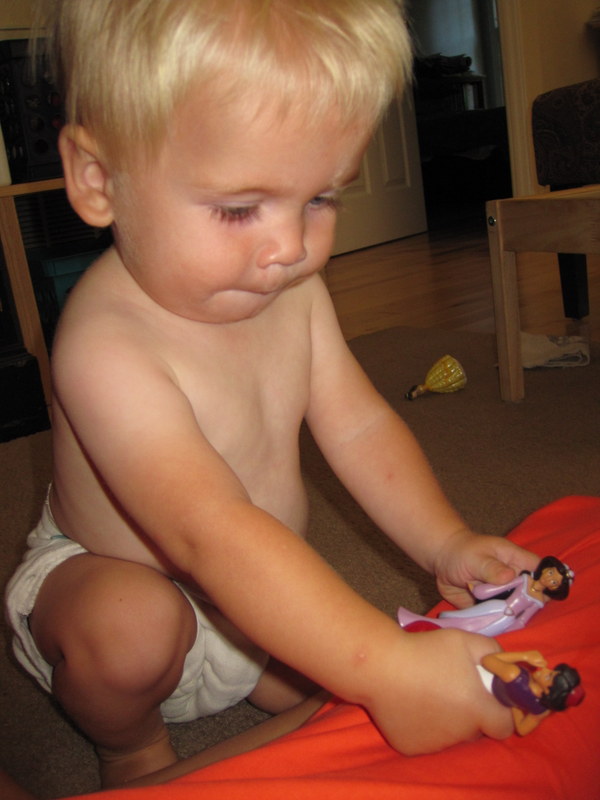 And, yes, he does tire of this sort of game quickly (which is why he steals Miriam's toys because her figurines are doing much more than just hopping up and down and saying, "Bah-bah-bah") and often devolve into what-orifice-can-I-stuff-this-toy into. The most popular place to shove toys is his mouth, with his nose coming in close second. 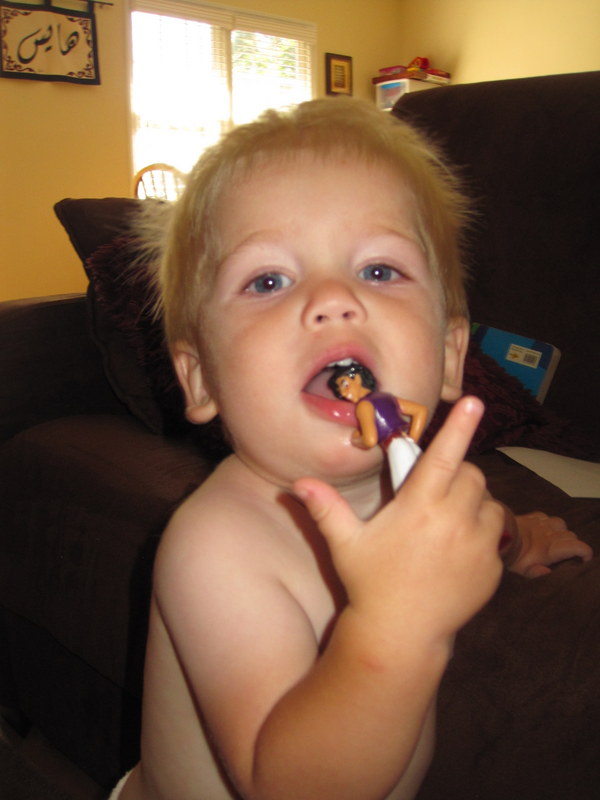 Benjamin's been a barefoot baby for most of his life. We've had a few pairs of soft-bottomed booties that he's worn, but only occasionally. Today, however, he wanted to try on a pair of shoes from his shoe bin and so we dug around until we found a pair that almost fits him (most of the shoes in there are far too big (they're hand-me-downs from cousins)). He felt pretty cool with those shoes on his feet, though this did hamper his confidence in walking. 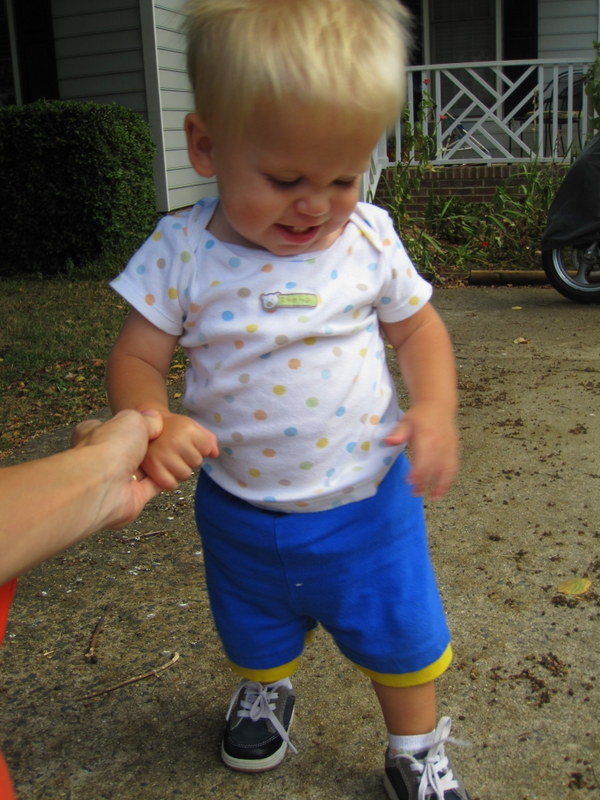 He wouldn't let go of my hand for a long time and when he finally did he was pretty unstable. 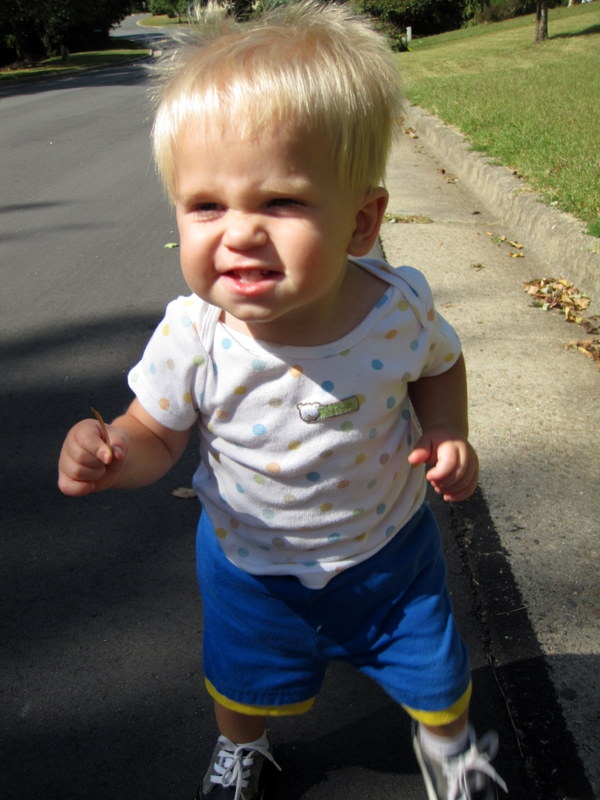 This is the butterfly that made him say "Buh!" He loves butterflies. I am so glad we made a more butterfly-friendly garden this summer because we always had butterflies in our yard! 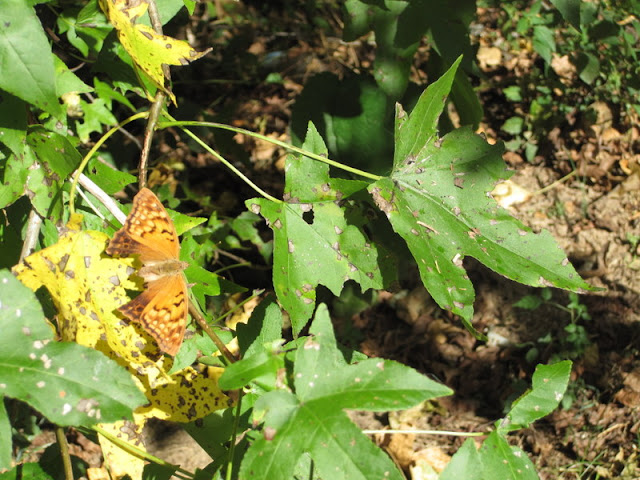 Both Benjamin and Miriam were super grumpy when we got home from our walk, so they were both asleep when Rachel's bus arrived. Rachel and I did some yard work while the little ones napped and when they woke up we made a picnic dinner to take to the park in celebration of fall break. 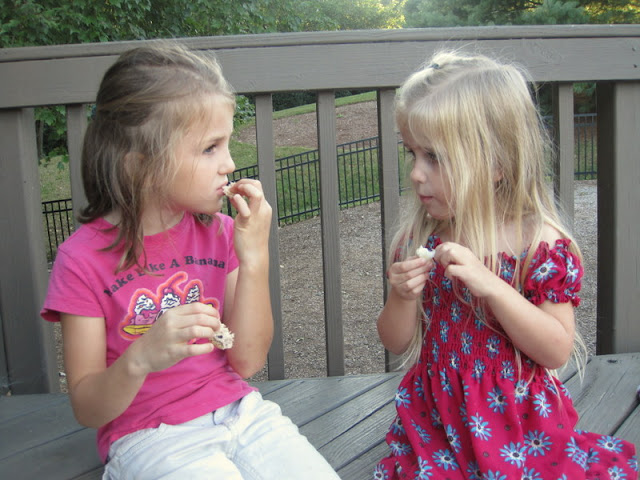 The kids had a lot of fun playing after dinner, though Benjamin found that his shoes got in the way once again. He was disappointed he couldn't climb up the slide very well. 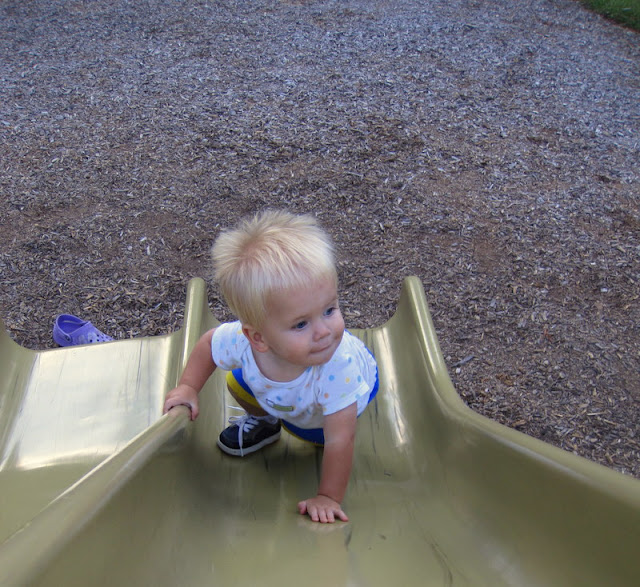 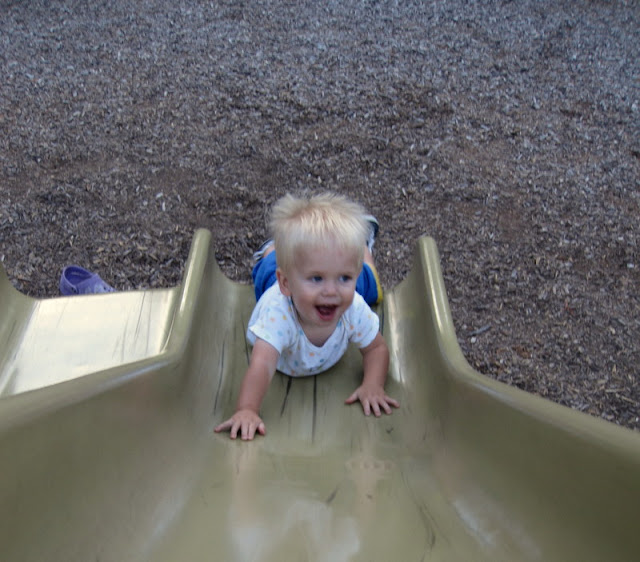 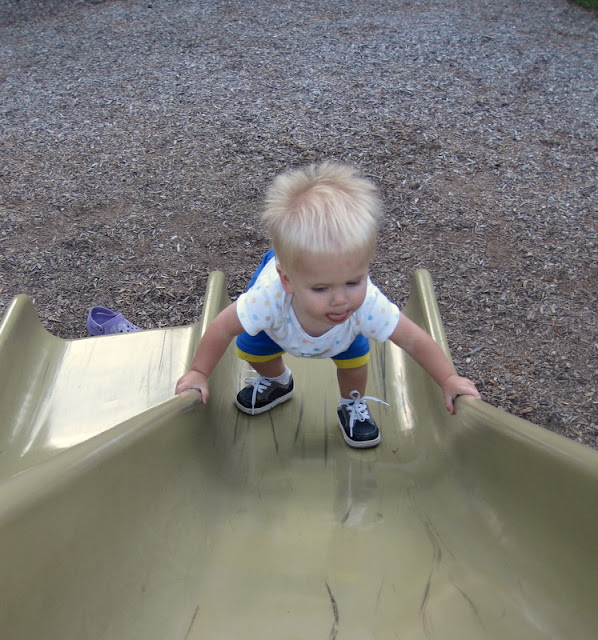 Here's Rachel mapping out the route she plans to sail the ship she was the captain of. 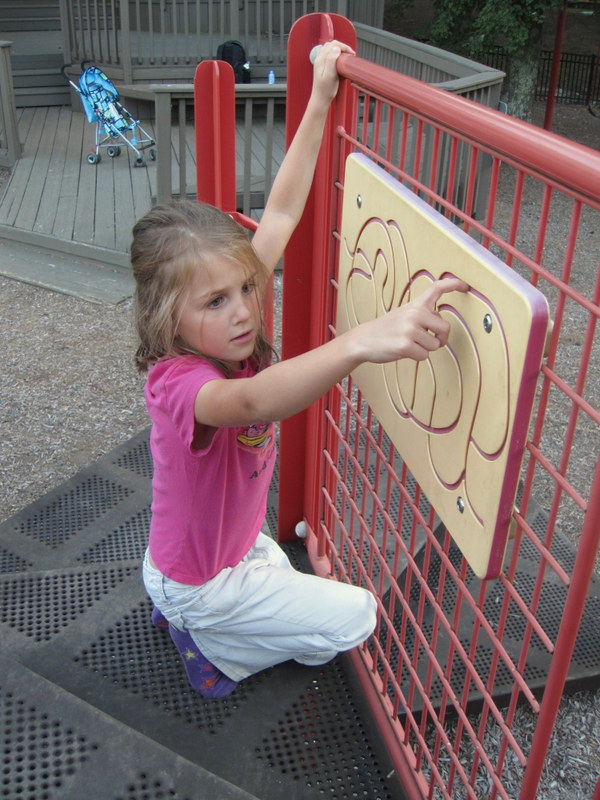 And sliding down a pole: 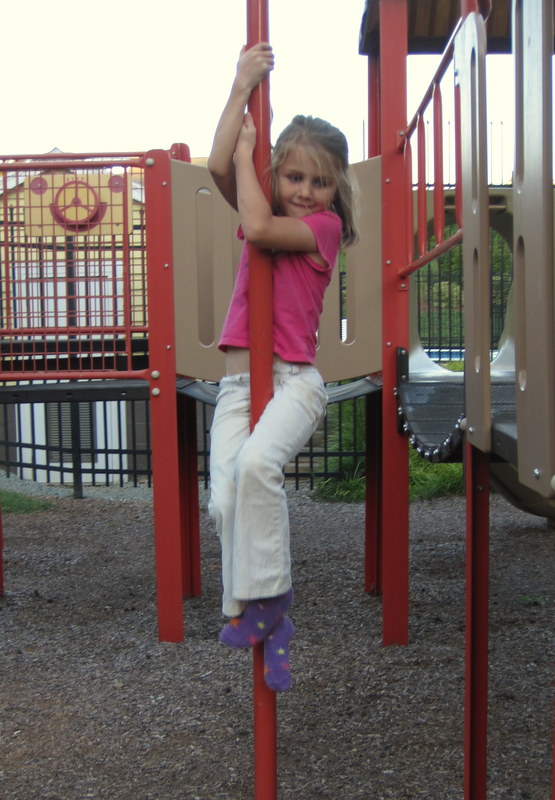 And here's Miriam showing off her lollipop—a gift from Rachel's bus driver (Rachel ate the other one while Miriam was napping and made an elaborate display to gift this lollipop to Miriam, including spelling out I LOVE YOU in blocks): 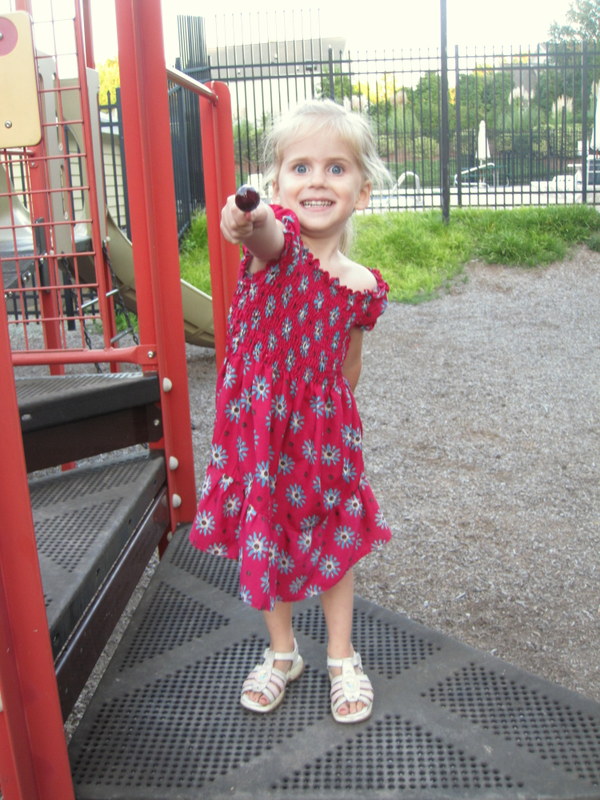 Here's Benjamin, very determined to climb up that slide: 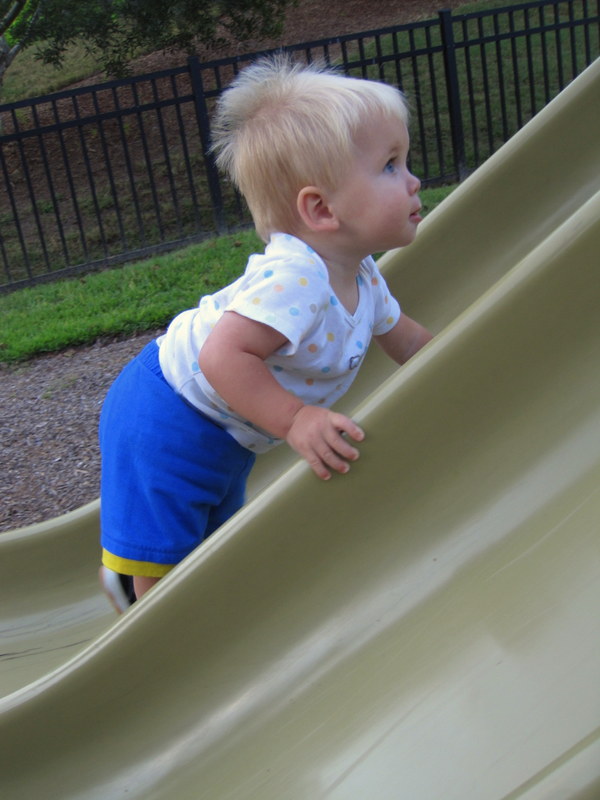 And here are all three kids: 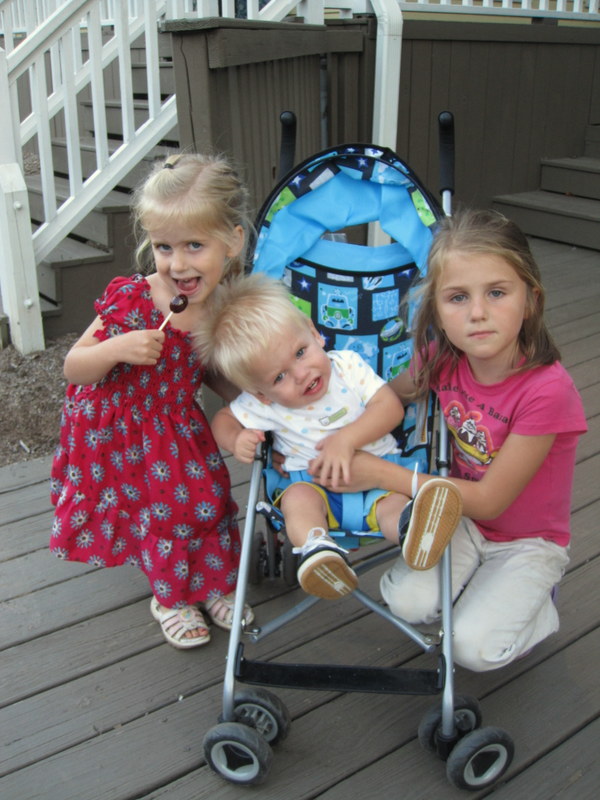 And here are all three kids after I said, "You guys: smile!" 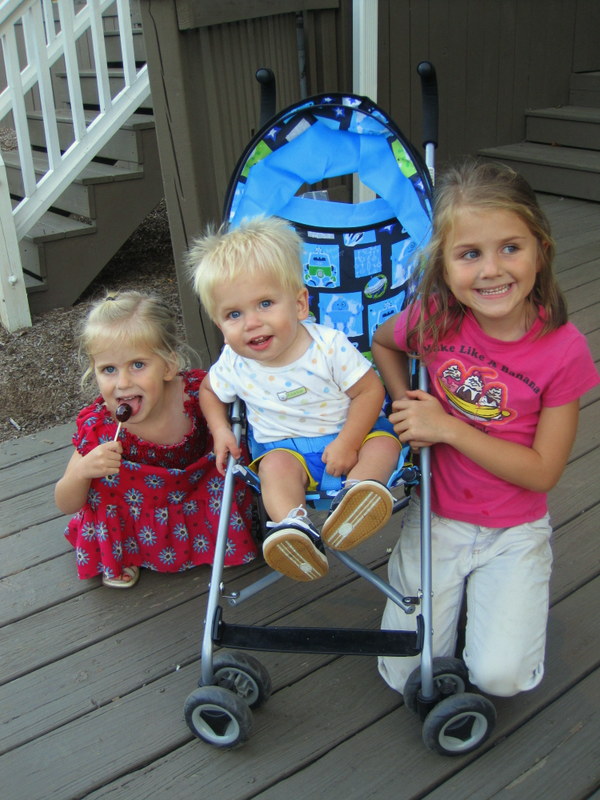 On the way home we spotted a big box by our neighbour's trash can so we asked if we could have it (because they were in their yard and it would have been really awkward if we'd just taken it...even though it was clearly designated as garbage by this point). Rachel's got an idea for a Halloween costume up her sleeve but it will require a fair amount of cardboard to bring to fruition.

Inside the box were a bunch of foam pieces (to keep whatever came in the box (a 51" flatscreen TV) from shifting) and a big foam sheet (to protect the screen of the TV). Rachel immediately knew she wanted to turn that sheet of foam into a ghost, so that's what we did. In fact, we made two! 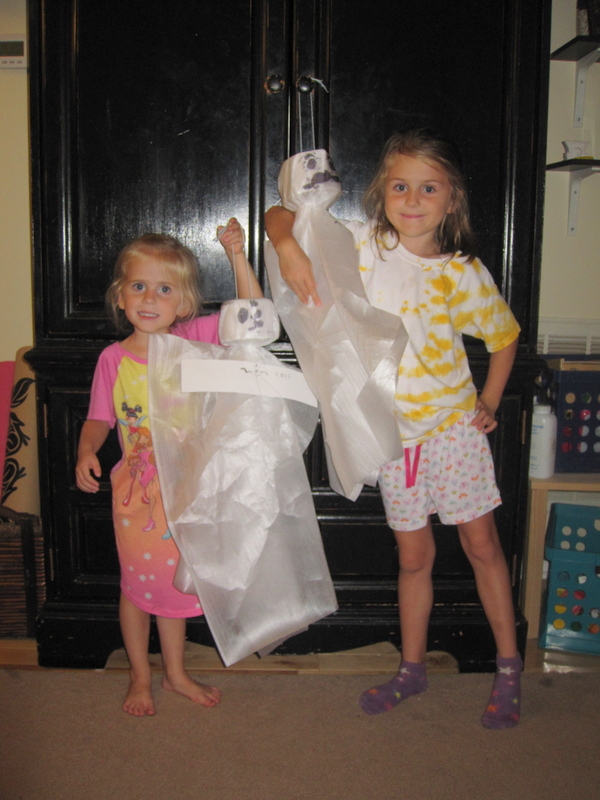 Rachel said, "I know! I can pretend this ghost is my friend when no one else can play with me!" She wanted a picture alone with her ghost. She doesn't know Benjamin photobombed her picture. I didn't take it over because I was ready to put the kids to b-e-d. I'm sure future-Rachel will forgive me. 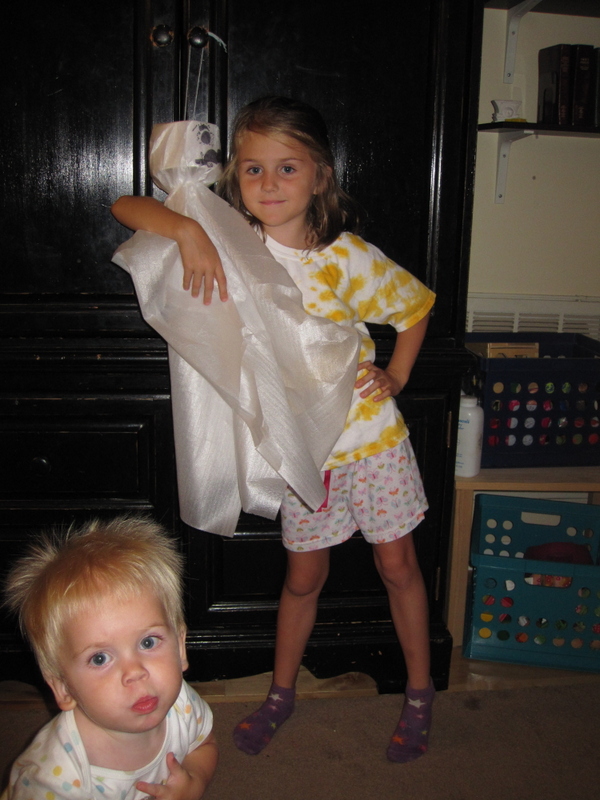 And here is Miriam with her ghost, whose name is Keaf (because Miriam wrote down a bunch of random letters and then sounded out the word that they spelled; it's how she spells a lot of things. "Oh, I just spelled Rilmeften!" Fabulous work, Miriam.). In Keaf, Miriam is sure she's found a friend who will stick with her "even when all the kids in the world move away!" 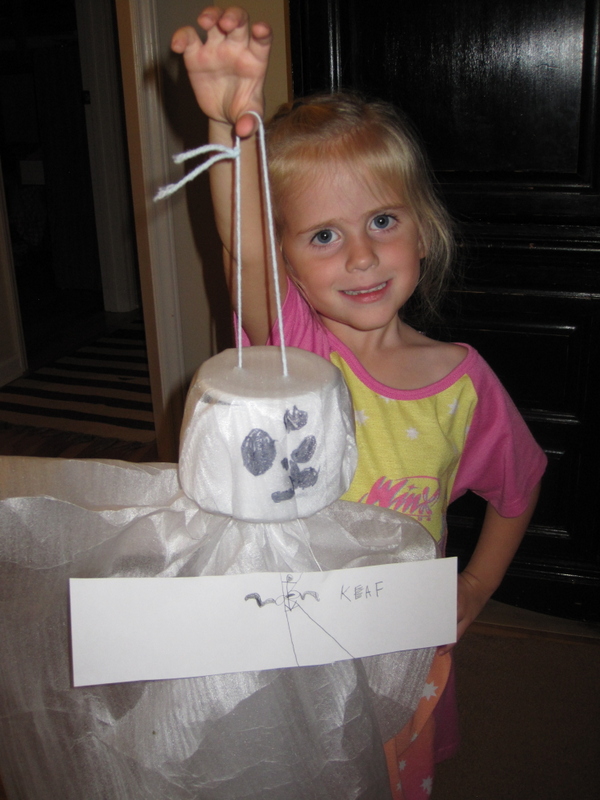 These friends are sure to stick around at least through October. I can't promise they'll stay out of the garbage can much longer after that. That's the joy of making decorations out of garbage—I don't feel bad throwing them away when we're finished with them!
Posted by Nancy at 12:42 AM