Last night Andrew and I were cleaning the kitchen when he remembered that he had to teach the Elder's Quorum lesson this Sunday. He excused himself, saying he was going to go read through the lesson. The kitchen was almost clean (enough) so I didn't mind him leaving and was rather surprised when he ran back into the kitchen moments later.

"We're going to want to go outside in a few minutes," he said.

I was also rather surprised to hear him say this because we had just been joking about being too chicken to brave the spiders/bats/creatures in the dark to take the garbage out. Now all of a sudden he's pulling on a sweater (to ward off mosquitoes, not cold) and urging me to find my shoes.

"They're launching a rocket from Virginia to the moon right now and we are within the view zone!" he excitedly explained.

With his iPod (acting as a compass) and his iPad (acting as a television), we went out on the back deck, positioned ourselves to the NE and counted down with NASA. Once the Minataur V had liftoff we had 120 seconds before we'd be able to see it, so we waited for a while, scanning the sky, before decided that either our chimney or trees would be in the way and that we'd probably have better luck out in the street.

With 40 seconds on the countdown, we ran through the house and braved the walk under the trees where orb spiders are prone to string their gigantic webs (I made Andrew go first).

We stood in the street together, blocking the streetlight with our hands, staring up at the sky.

We weren't really sure of what we'd see, or if we'd even see anything, and were just about ready to give up when we heard a zoom and saw the rocket streak across the sky. We only saw it for a split second, but it was rather amazing, even phenomenal.

Andrew used the word phenomenon at the dinner table the other night and the girls had no idea what it meant.


"It's a thing that happens," Andrew said, giving the academic answer. I decided to give the girls the more colloquial meaning since not everyone is an eternal student. "It's not just 'a thing,'" I explained. "It has to be something unusual or amazing."

Here Miriam's hand shot into the air and she exclaimed, "A lot! A million!"

She completely invalidated my example. What she meant, though, was that there are a lot of stars in the sky. I'm not sure she's ever seen a shooting star herself, though I'm sure she will when she's older. And it will be phenomenal for a split second. Watching a rocket launch, though? That was phenomenal for the split second we saw it and it remained phenomenal for a long time after.

When we were getting ready for bed, Andrew pointed out the heart he'd drawn on our mirror with a whiteboard marker. We often leave notes for each other on the mirrors. Reminder notes, love notes, any kind of note.

Rachel noticed Andrew's note the other day, which fell into the love note category. He drew a big heart on the mirror with a little arrow pointing to it and labeled it "heart."

"What's that?" Rachel asked and before he could give her an answer she said, "Oh, I know what it is. Sometimes after we go to bed you and mom write secret messages to each other."

This was such a funny idea that I went into the girls' bathroom and left a secret message for them (Rachel asked me to take a picture of it before she cleaned the bathroom mirror): 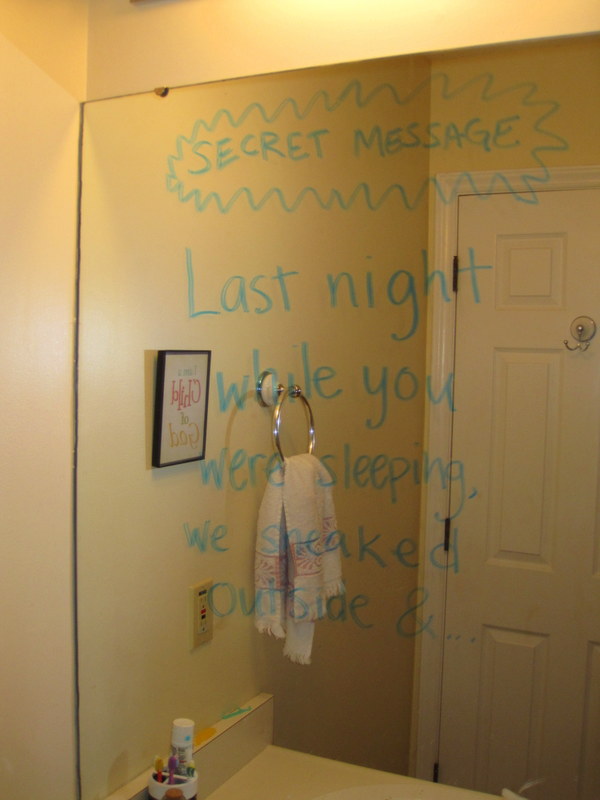 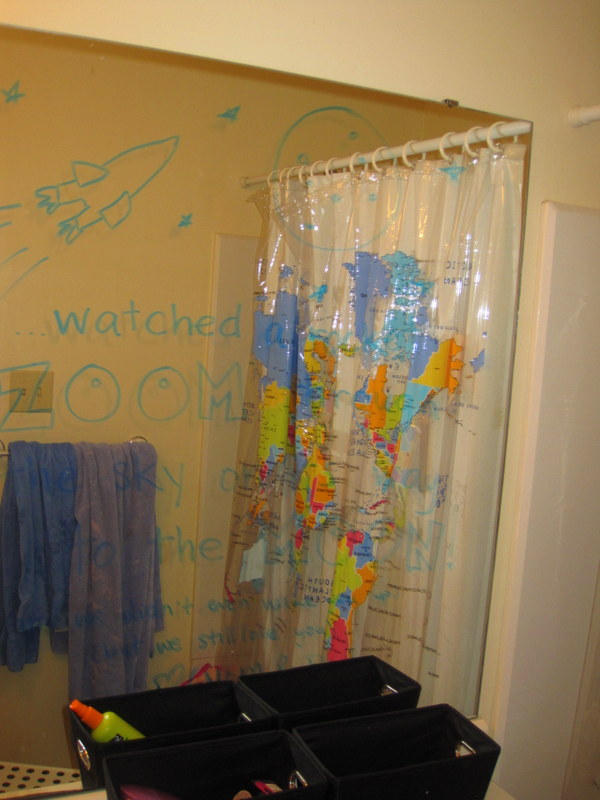 Last night while you were sleeping we sneaked outside and...
...watched a rocket zoom through the sky  on its way to the moon!
(and we didn't even wake you up)
(but we still love you)

We had a long discussion about robots, people, and monkeys being sent to space; about the mission of the LADEE; and about whether or not it's possible to be a scientist and a teacher at the same time.

"That's what I'm doing," Andrew explained. "I studying to be both a scientist and a teacher."

"You're not a scientist," Rachel scoffed, which led to a discussion of hard versus soft science and whether or not the soft sciences are legitimately science. All that aside, we were able to assure Rachel that it was absolutely possible to be both a teacher and a scientist.

Ever a curious child, she asked at dinner if people study languages.

"That's what Mom studied in college," Andrew told her.

"But Mom quit college," Rachel said, with a hint of disdain.

"She didn't quit," Andrew corrected her. "She finished. There's a difference. Mom finished all her classes and graduated from college. You're looking at a real-live linguist."

"Yes, well..." Andrew choked, before launching into an explanation of undergraduate versus graduate education. There was also plenty of linguistic talk. Linguistics is another one of those soft sciences.

Softer scientists are perhaps a little more frightened when they come across things like Tussock moth caterpillars. Andrew found one on our crepe myrtle while he was out pruning some branches—those trees can grow over a foot per year and ours had been growing so sneakily that we hadn't even noticed we'd begun to hunch over when walking out to our van (Andrew removed enough branches that we don't have to do that anymore). Anyway, he came into the house exclaiming about this "caterpillar with human molars growing out of its back!" 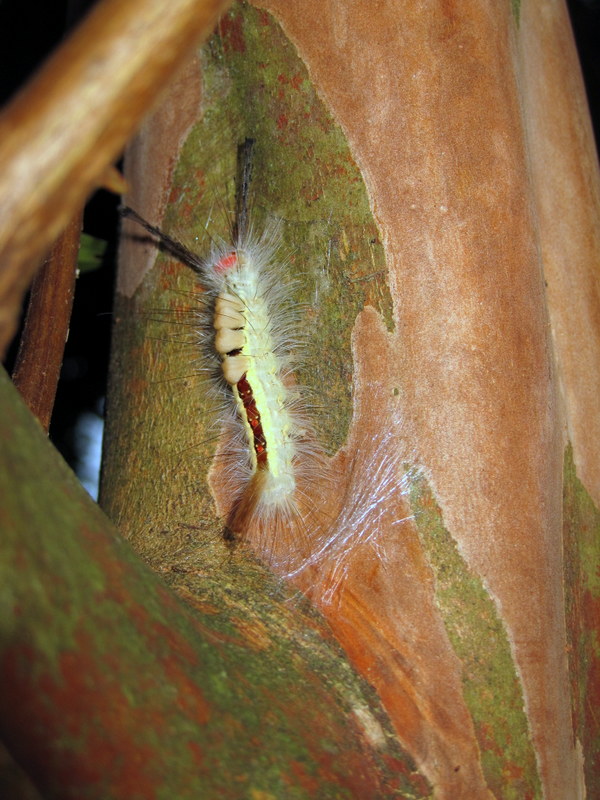 He didn't touch it, which was wise, as those hairs are urticating hairs, and will leave a nasty rash. 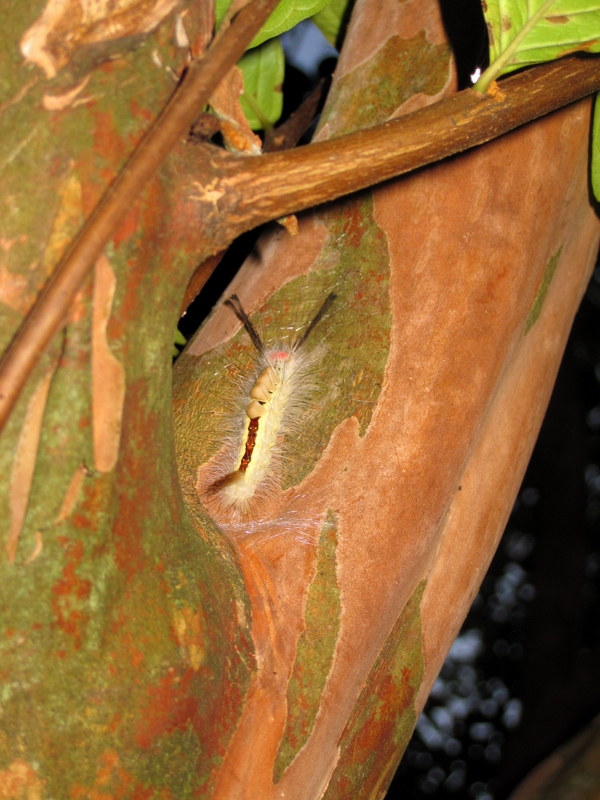 I think this is a white-marked Tussock Moth caterpillar (we have a lot of crazy caterpillars out here). A tussock is "a small area of grass that is thicker or longer than the grass growing around it," in case you were wondering (as I was).

It was still there when we left to go to the park this evening, so Andrew lifted the girls up so they could look (but not touch!). They thought it was beautiful!
Posted by Nancy at 11:14 PM