It's Andrew's birthday and what does he do? He gets up with the girls in the morning and warns them not to wake me unless the house is on fire, that's what he does. That's the mark of a good man, right there!

He left for school and the girls were completely self-reliant.

Benjamin and I didn't wake up until 10:30! And then I was a bit in a panic because we had so much to do to get ready for Daddy to come home. We had to bake a cake! We had to clean the house! We had to wrap his present! Yes, singular—present. I'm terrible at gifts so this year Andrew got one, which he bought for himself a while ago and which I confiscated and said, "Ha! We're giving this to you for your birthday!" It's not that I'm not a thoughtful person it's just that I'm, in general, a lousy gift-thinker-upper.

But I'm not a lousy cake-maker, so that was our main project for the day.

Twenty-nine?! How did he/we ever get this old?

We met when we were fifteen—me just barely fifteen and he nearly sixteen—which means that we've now known each other for nearly half our lives. That's crazy to think about! Not to mention that twenty-nine is a scary number in general—it's just one away from thirty!

Rachel showed Andrew her draft of the cake. She drew twenty-nine candles on it, just for him.

"There aren't twenty-nine candles on that cake!" Andrew said. "There can't be! It looks like there's at least sixty!"

She counted them for him. You're welcome to count them as well. There are, in fact, twenty-nine of them and those twenty-nine candles certainly make the cake look mighty crowded! 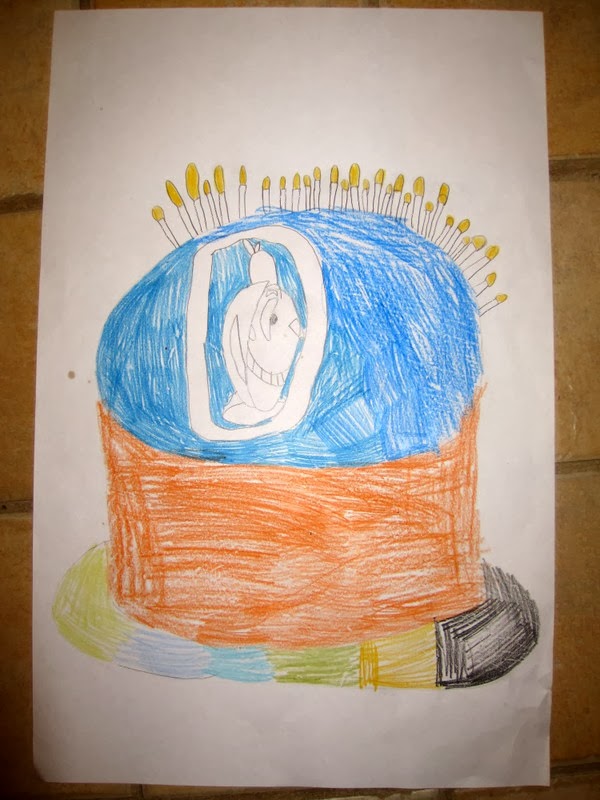 Once the cake was in the oven, I whipped up some icing for the girls to practice with. I clipped the bag shut with an IKEA bag clip and I am so glad I did because otherwise we would have had icing everywhere. The girls are definitely middle-of-the-tube squeezers. 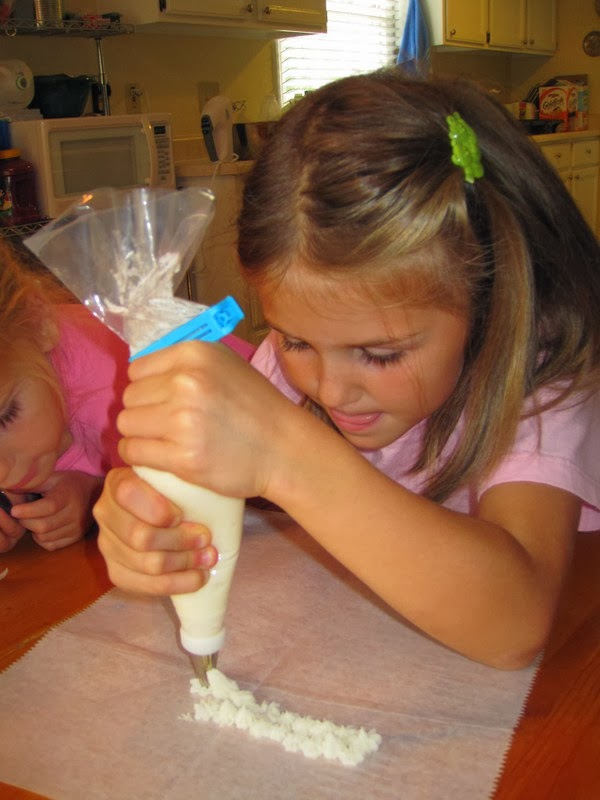 There aren't many pictures of the cake in production because I was busy hovering. I didn't feel comfortable with the girls just going to town when we all had our hearts set on making something that looked at least somewhat like what we saw online when we were hunting for inspiration.

Both Miriam and Rachel took turn squishing out stars to make the Duke D. I drew the Blue Devil inside. And then I let the girls go to town on the border around the cake. I suppose it was mostly Rachel who did the border because by this time Miriam was complaining that her arm hurt too much to continue. That's what Rachel learned about cake decorating, too! Her arms were getting achy as well, but she pushed on because she was so excited about it. 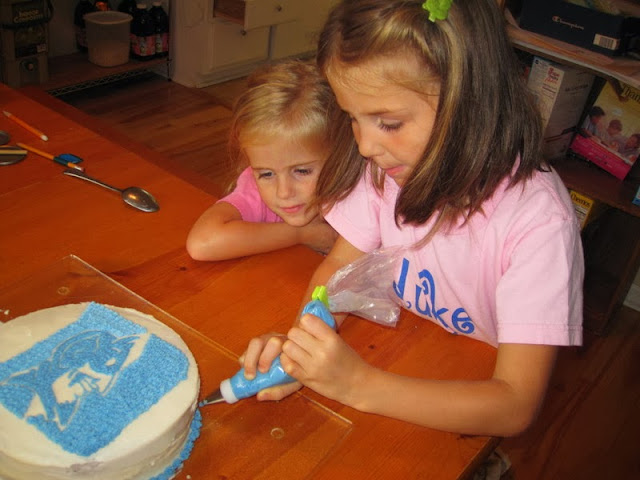 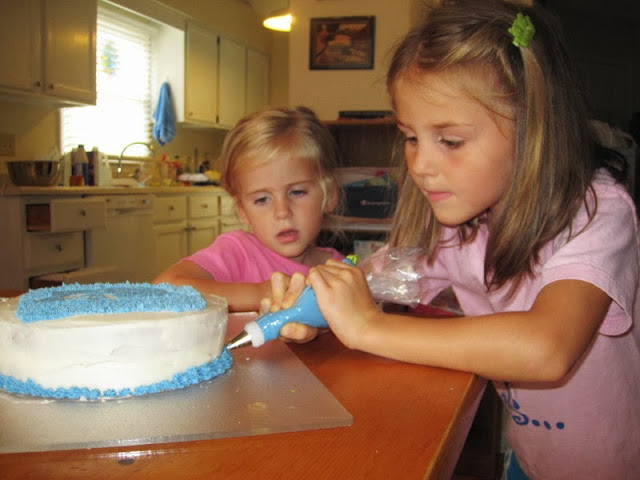 I realize our cake is Carolina Blue. Making Duke Blue icing seems to be somewhat impossible (at least with the products I had on hand). There's a joke in these parts that goes like this:

Q: How do you know God's a Tar Heel fan?
A: Because he made the sky Carolina Blue.

Apparently food colouring also favours the Tar Heels because I could not get a deeper/brighter blue to save my soul.

The rivalry between Duke and UNC is about on par with the one between BYU and U of U, except that in Utah nearly any hue of blue will do to show you're a BYU fan. You have to be a little more careful about such things in North Carolina. It's  a good thing I'm not terribly interested in sports.

With the cake and a late lunch behind us, the girls helped me tidy up a bit before asking if the could go to their room to play. I told them they could if they'd take Benjamin with them, so they did. They spent about an hour entertaining him in their bedroom and I got so much work done.

Later in the afternoon they noticed that the girls across the street were out playing so we went outside to join them. Benjamin wanted so badly to join in the big girl games, but I did my best to keep him out of the way, much to his disappointment.

He spent some time exploring the flower gardens: 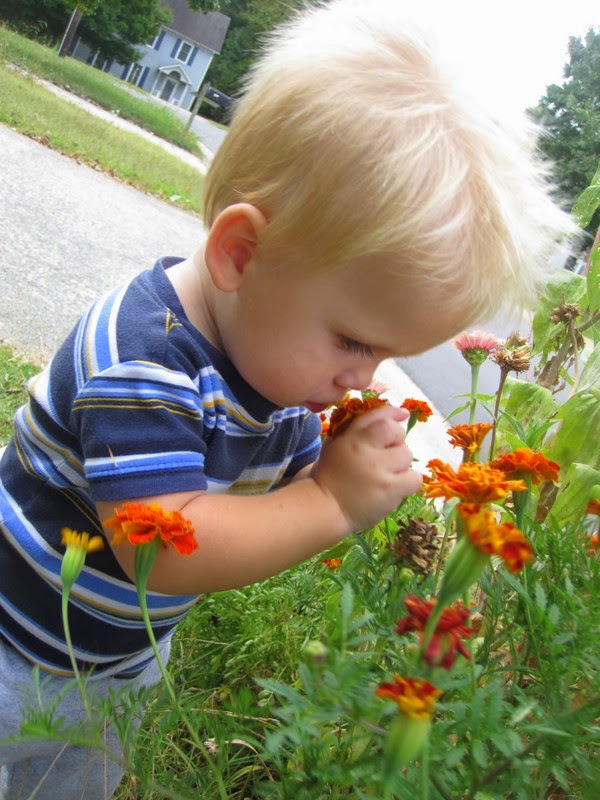 He accidentally picked a marigold and was so confused by it. He spent the next several minutes trying to put it back. 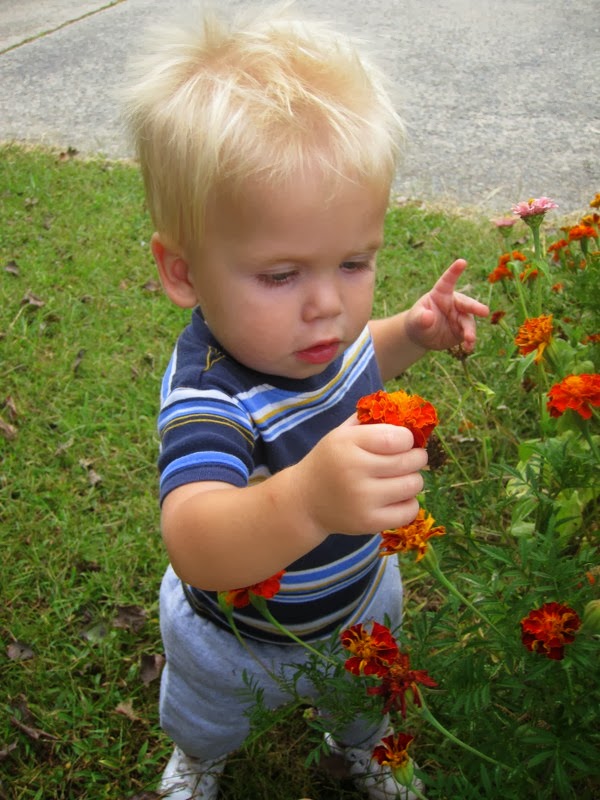 He also spent some time playing with his ball; he loves his ball. 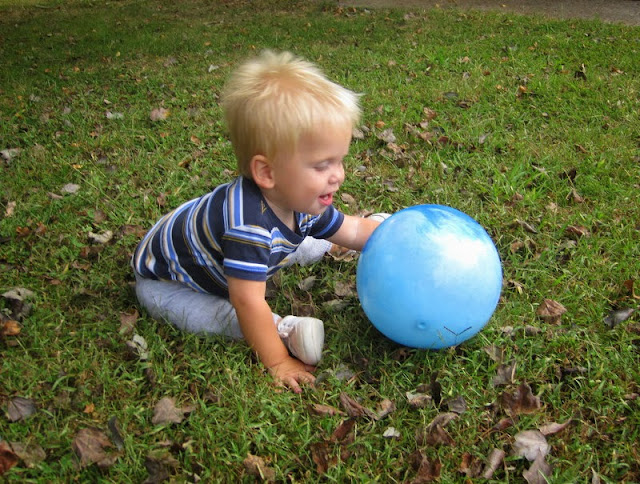 Daddy brought a Costco pizza home for his special birthday dinner. He's pretty easy to please that way. After dinner we brought out the cake. The girls were so excited to show Andrew what they'd done and told him all about which parts each of them did. 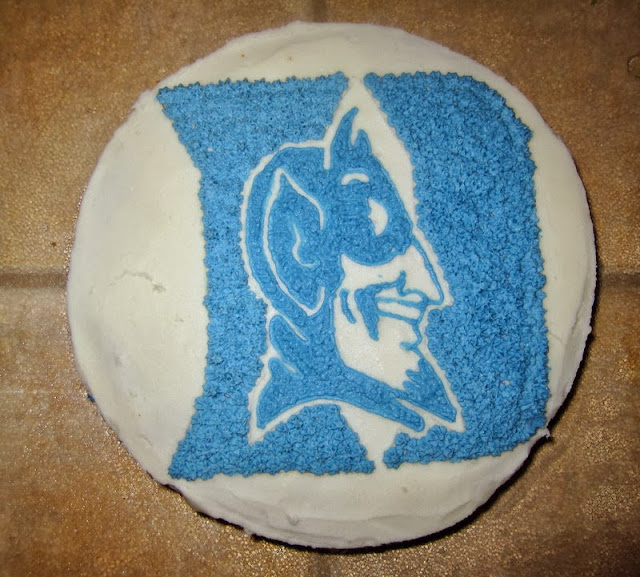 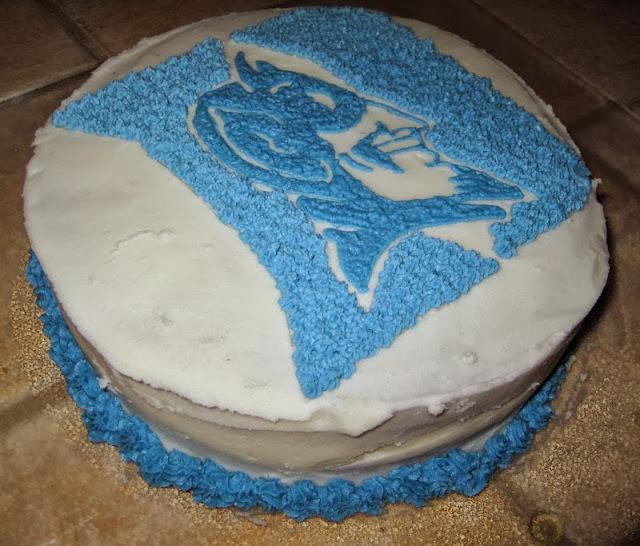 We didn't even try for twenty-nine candles though we did manage to squeeze on eleven (2+9). 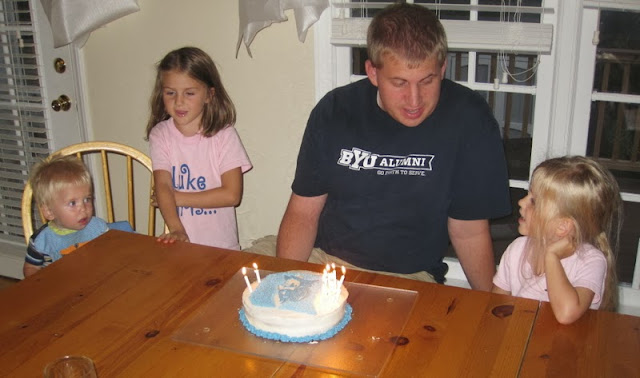 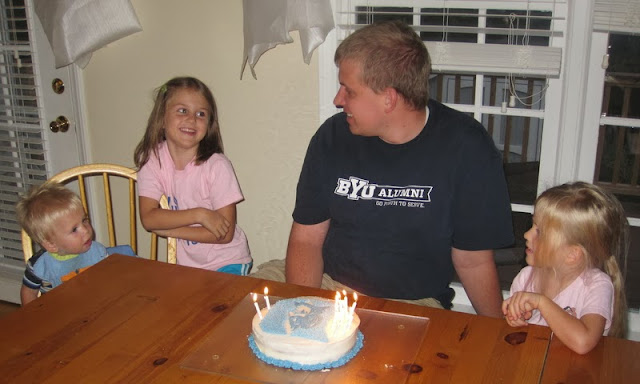 Everyone liked the cake, but I think Benjamin was the happiest of all. He loved the cake. 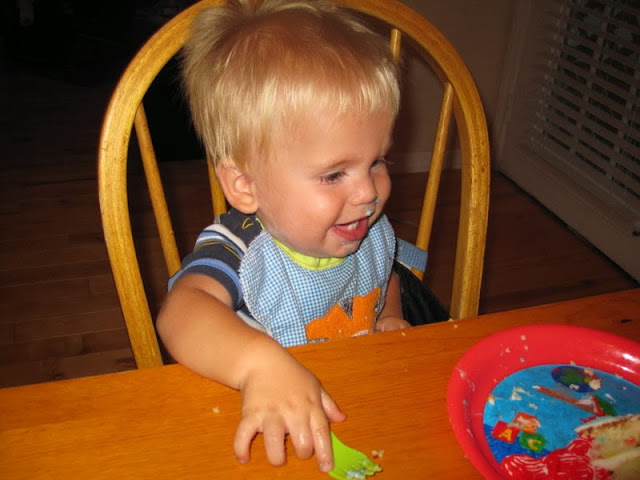 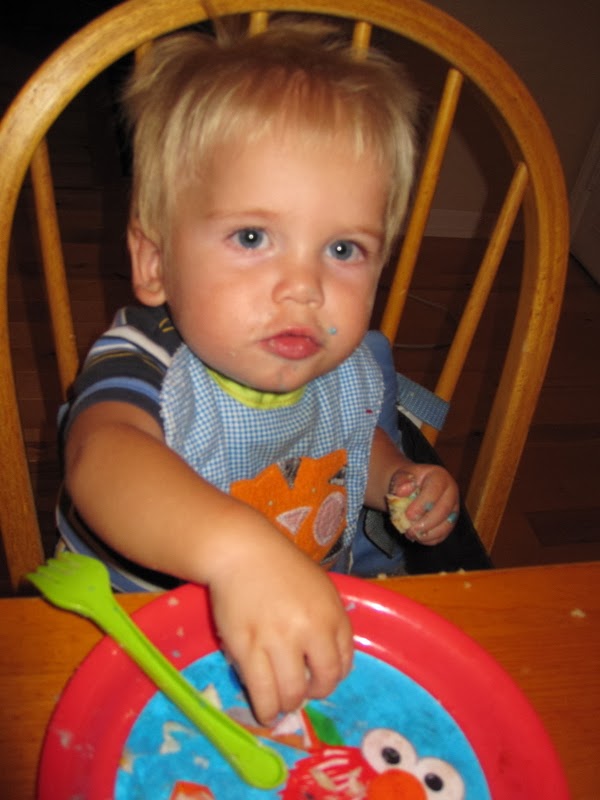 Here are goofy Daddy and Rachel finishing up their cake (while Keaf (Miriam's ghost)) hovers in the background: 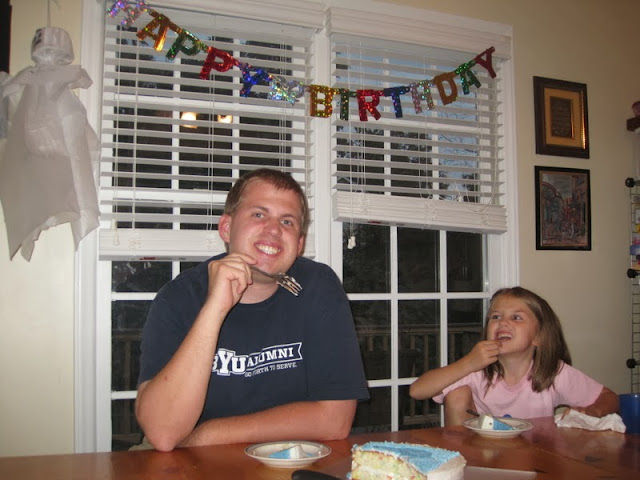 Rachel balanced cake on her nose for this picture: 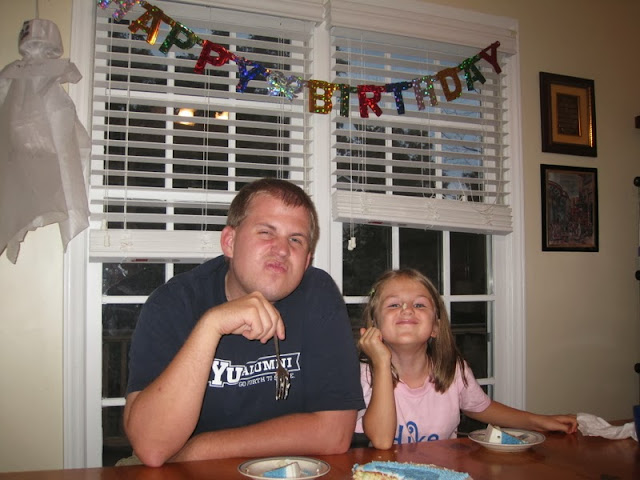 And here's Andrew opening his gifts. A card from Miriam: 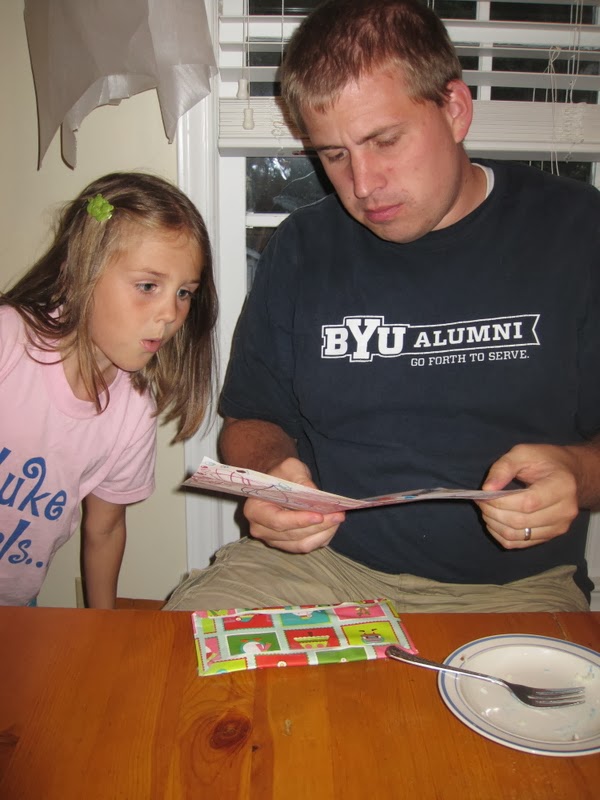 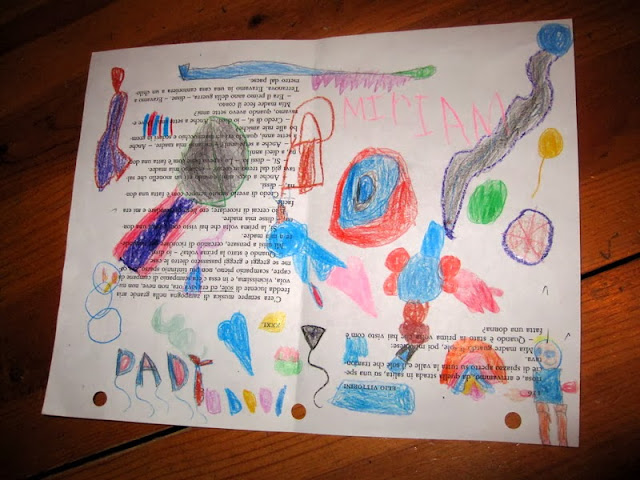 And a set of offset screwdrivers that he got for himself at Lowe's on his way home from school one day after we'd done a beast of a tight-space project. He'd forgotten that I confiscated them from him to gift to him later, so he laughed when he opened them. 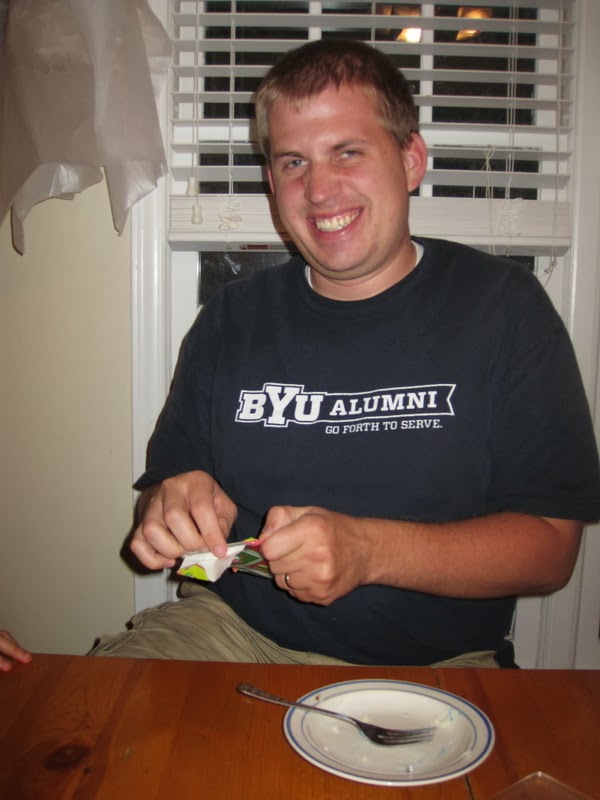