It seems like all of Miriam's little friends are in preschool, but Miriam's not in preschool and I'm not sure she'll ever go. I'm entirely okay with that because she's quite pleasant company at home, seems to play well with others, listens to her teachers at church, etc. I don't think starting kindergarten will be a huge leap for her when she gets there...in two years.

She does, however, insist on "homeschooling," though I have no set curriculum or schedule or routine or anything. We're pretty relaxed about the whole thing, doing "lessons" whenever we both agree it's a good time. Today she wanted to do some math, so we pulled out the dominoes and she counted up all the dots and sorted them from 1 to 12. We practiced saying equations like 5 + 1 = 6. 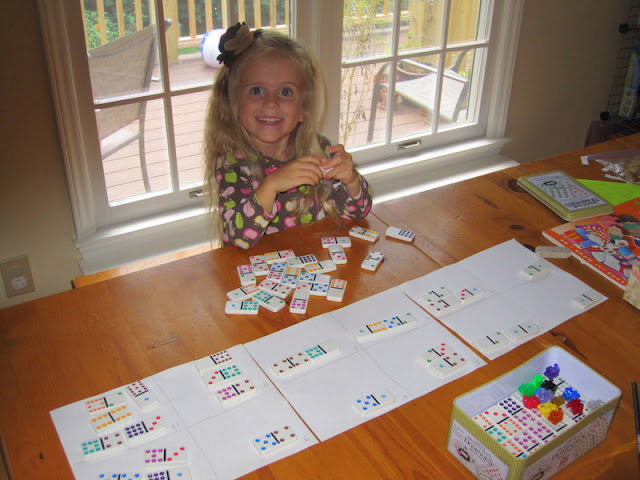 Stating equations was much easier for her with the lower numbers, when she could recognize the number by sight (eg. 2 + 3 = 5, where she didn't have to count and knew the answer), rather than the larger numbers which she mostly just counted because the equations were too complicated (eg. 9 +3 = 12, where she didn't recognize the 3x3 formation of 9 so had to count and then didn't know the answer off the top of her head).

She had fun with it and then built towers with the dominoes when she was finished.

Benjamin, meanwhile, showed me how he could stand on his tiptoes and touch the table. He wanted to play with the dominoes, too! 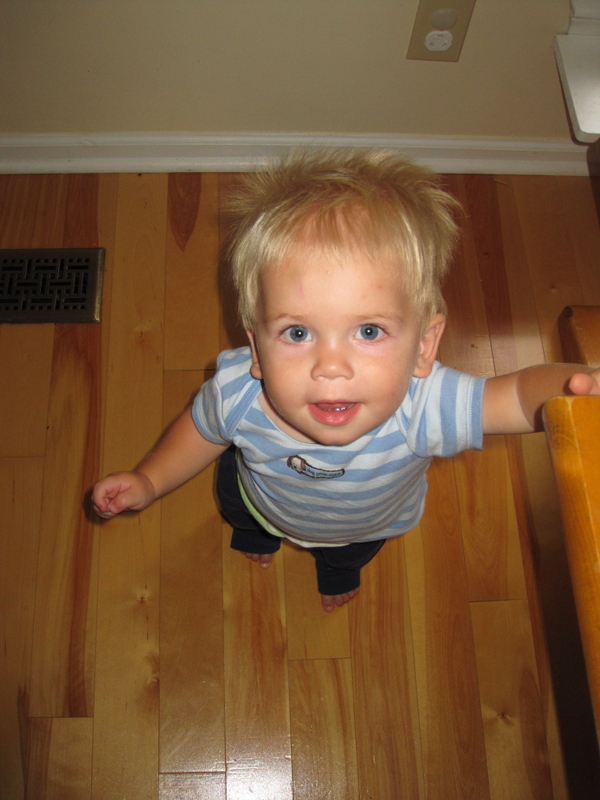 When Benjamin went down for his nap this afternoon, Miriam wanted to draw a picture with "everything in outer space" together. She drew a black hole, the earth (with ants on it), the sun, and a star. I drew a couple of planets, the moon, an alien, ET riding a bicycle (upon her request), a meteor belt, a rocket ship, a shooting star, and various other space things. We were basing our drawing on cold, hard facts, obviously...not. 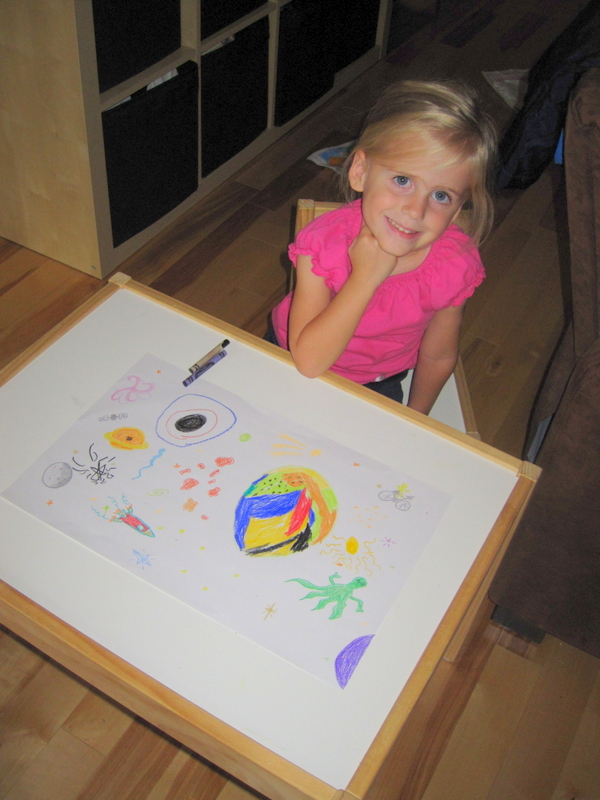 When Rachel came home from school she threw a fit about having to take out the trash, so I made her go outside and scrub the house. This might be a permanent punishment for as long as we live in the south because our house is molding. It's been so terribly humid lately—I feel like I'm drinking the air lately—and I guess it's a pretty normal thing because when I looked it up online there was a ton of advice on how to wash mold off your house siding. 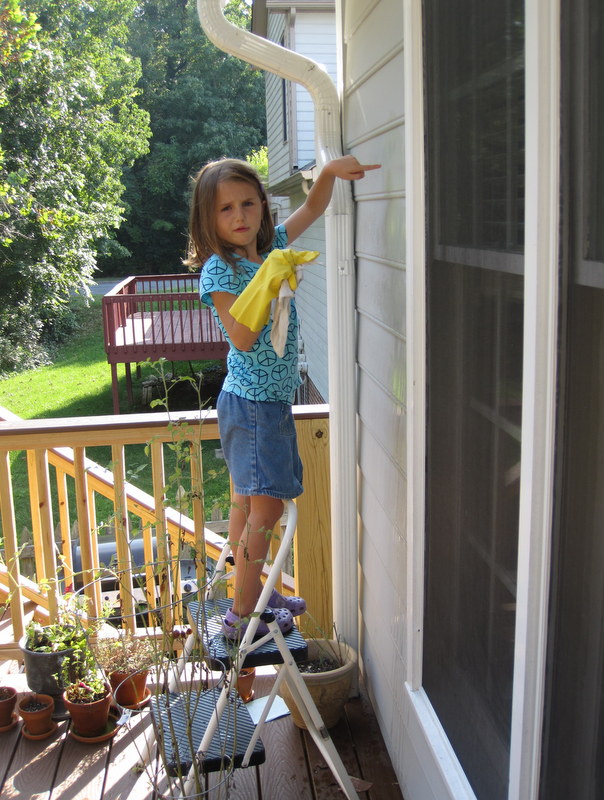 I scrubbed one section of the house a little while back and it looks so much better than the rest that now I feel like we have to finish the job. It's really just the back of the house that's moldy...I think. Anyway, Rachel had the privilege of scrubbing the mold with vinegar/water due to her saucy mouth. She really enjoyed it, I think, simply because it was something new to do.

After dinner we brought in the stepladder and I left it in the kitchen to go do something (which I think was putting the rag in the washing machine but I can't remember).

Benjamin had climbed up the stepladder and was busy drumming on the handle. He can also climb up the stairs on the bunk bed, which is rather concerning. We thought it would take him a little while before he managed it since the stairs are taller than regular stairs, but it's the first thing he heads to every time he gets in their room (which is usually closed off to him since it's their sanctuary and is filled with, besides stairs, choking hazards and "special" things). 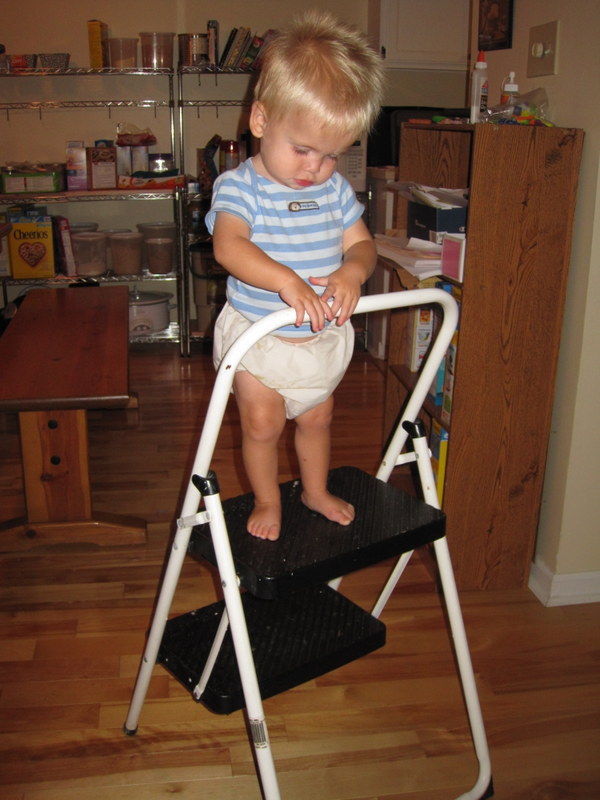 In other news, Benjamin's now tottering all over the place. For the longest time he was just taking a handful of steps before giving up and crawling. Today he seemed to decide he could walk everywhere. He even walked over the threshold between the kitchen and dining room and kept on going (the kitchen is tile and the dining room has wood flooring which always seemed to throw him off before).

This evening he found the little push toy Grandma sent for his birthday and pushed it from his dresser all the way across his bedroom, through his doorway, and across the living room! 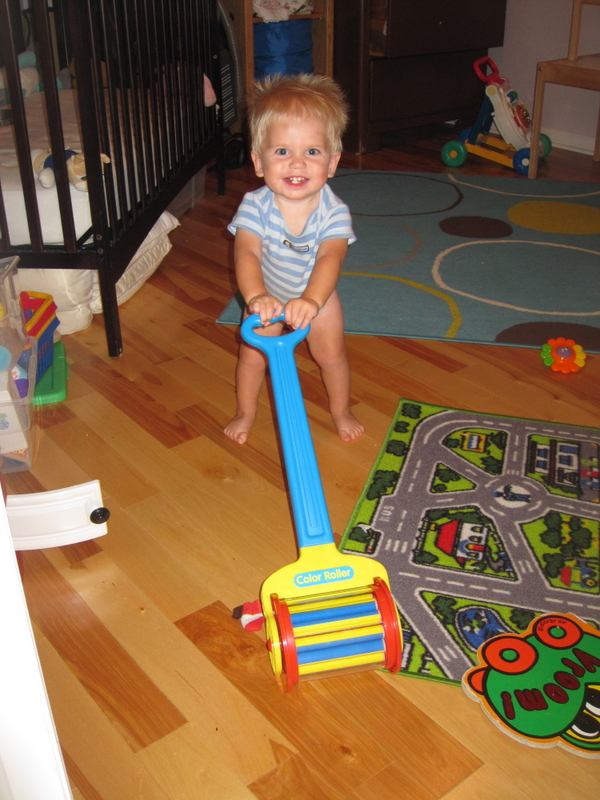 He's still pretty unsteady and walks with his knees locked, rocking from side to side like a miniature drunken sailor. It's pretty funny to watch. 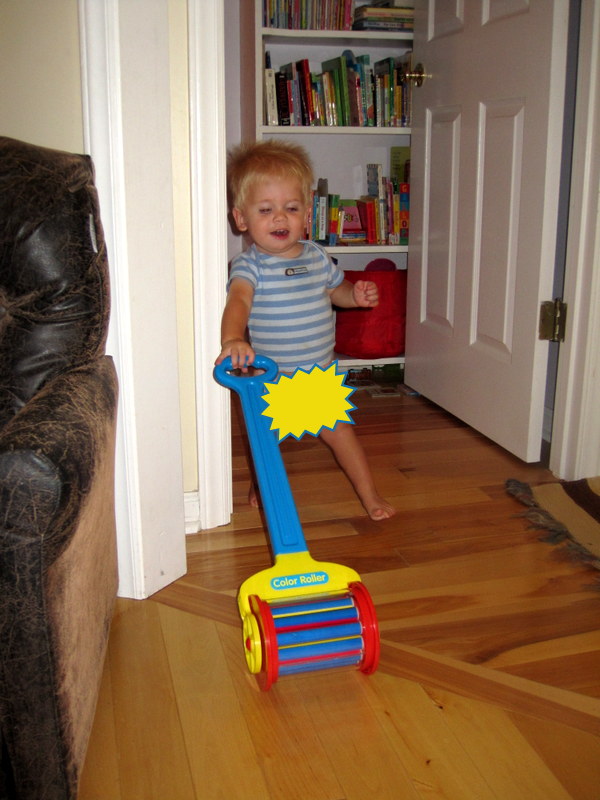 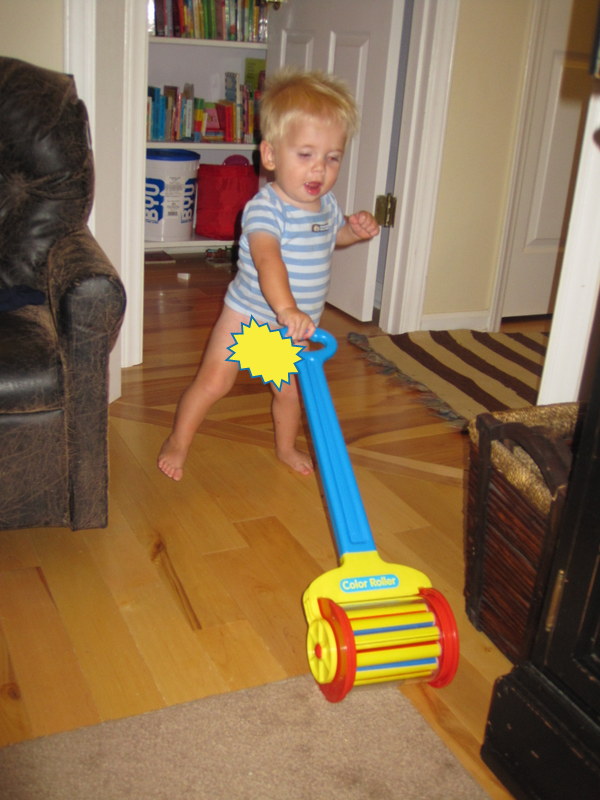 He's been nothing but trouble lately. He's still working on that one molar I complained about a couple of weeks ago, so he's still doing a lot of screaming and cuddling. When he's not screaming/cuddling he's off making mischief. Today he pulled the Scrabble game down and dumped the pieces all over the floor, among other fun (for him) activities.