Scary-bug season is still going strong here so we haven't been spending as much time outside as I'd like, but soon Rachel will be on fall break and I'm sure we'll venture outside much more often since she's determined to ride her bike.

Miriam loves staying indoors since she dislikes bugs so much. Today she went on a nighttime ride with Benjamin in his bedroom; she closed the blinds and turned off the light so it would be "dark" in his room. We're reading The Horse and His Boy right now so she's been spending a lot of time sneaking into Benjamin's room to ride through Calormen on his rocking horse. She's very nice about giving it back to him when he wants it since she has her own teeter-totter (though she finds its lack of  equine anatomy slightly disappointing). Benjamin's getting rather opinionated about things. He doesn't say much but he does a fair share of pointing and grunting (and screaming) to ensure his needs are communicated (and that he gets his own way). This morning I sat Benjamin on the toilet in our bathroom and he just would not go, which was ridiculous since he was basically dry. Little boys who wake up slightly damp after sleeping all night need to go potty in the morning. Everybody knows that. But no matter how much I tried to explain this to him, he would not go.

I finally let him get down—being sure to put a diaper back on him because he had a whole bladderful of fluid in his little body.

"Did he go?" Andrew asked (every body was up long before it was time for the bus/for Daddy to leave).

Benjamin looked at him, grunted his assent, and took off crawling full steam ahead toward the girls' bathroom where he stopped and started knocking on the door. I opened it for him, took his diaper off, sat him on the toilet, and he went, just like that.

Later in the day he brought a cup to me and banged it against my leg while grunting.

Again he grunted and nodded.

Unfortunately, the cup he'd brought to me doesn't have a lid and while drinking from a regular cup is a cool skill, it isn't one Benjamin has completely mastered, so he often gets handed a sippy cup. I was busy cleaning up some messes in the kitchen so instead of looking for the missing lid I grabbed a different sippy cup and got that ready for him. He took it from me but was not very impressed with the switch I'd made.

He opened the cupboard, got the original sippy cup out, and tried to fix the horrible injustice done to him by shaking the water from the cup I gave him into the cup he wanted. 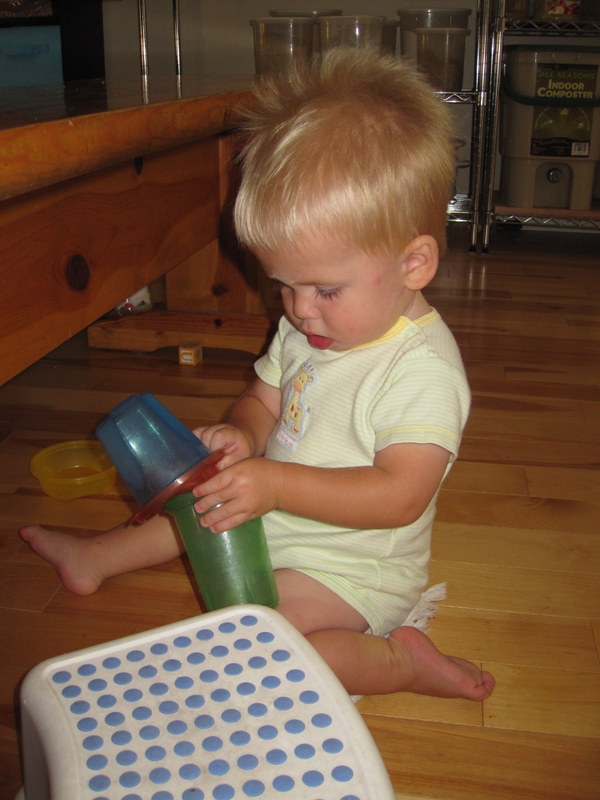 It was a slow-going project. 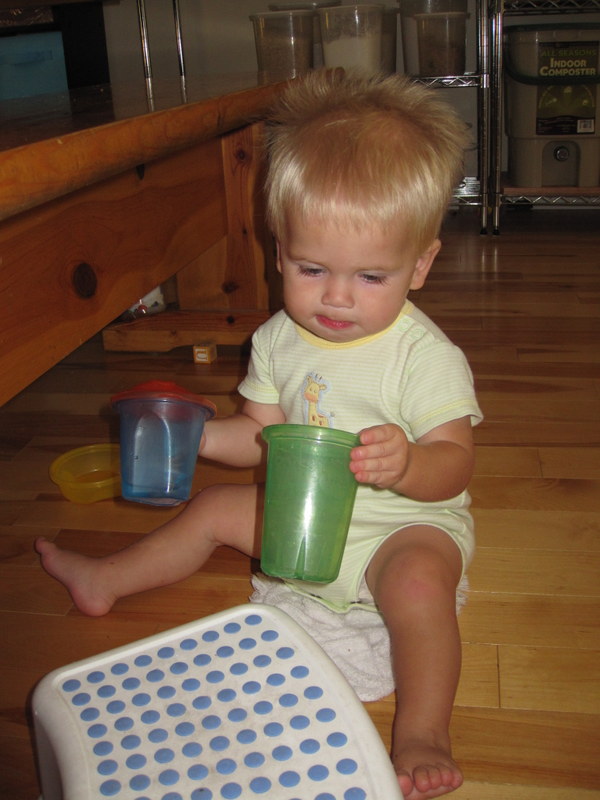 With reluctance, he abandoned the idea, drank from the cup he was given and went on with his day.

I don't think I'll ever grow used to how clever children are (not only my children but all children).
Posted by Nancy at 12:24 AM