One of our family goals this year was to "make the shed awesome." We did that on Saturday (and it was quite the project) and now we can walk into the shed and get our bikes out and everything (because before everything was just shoved on top of everything else in a big jumble). So today I pulled out my bike and the bike trailer (and pumped up all the tires) and we all rode to the park together. Rachel still doesn't have the pedals on her bike but she's learned how to balance on her bike quite well.

I was terribly sweaty by the time we got there. I kind of wished the pool was open, but because it's October now it wasn't. Just look at how sweaty Benjamin and Miriam are—and they weren't even pedaling! 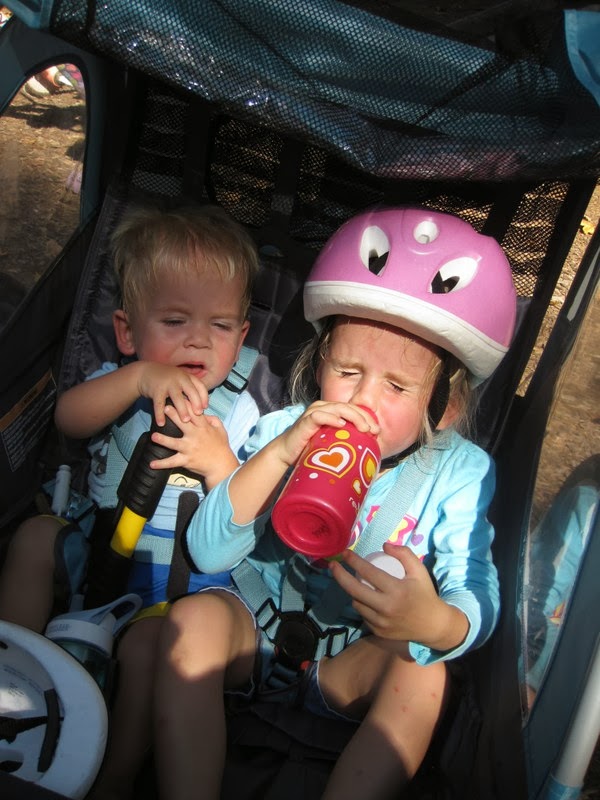 Moments before this, Benjamin had been holding onto all the foam inserts for his helmet for dear life, but he exchanged them for the bicycle pump by the time I got the camera out. And just for the record, he started out the ride with the helmet on his head.

The first thing Benjamin did when we got to the park was to crawl underneath a gigantic spiderweb so that he could crawl up the stairs (he has an acute fascination with stairs). I nearly walked right into it but stopped just in the nick of time. You can kind of see the lines of the web in this picture. 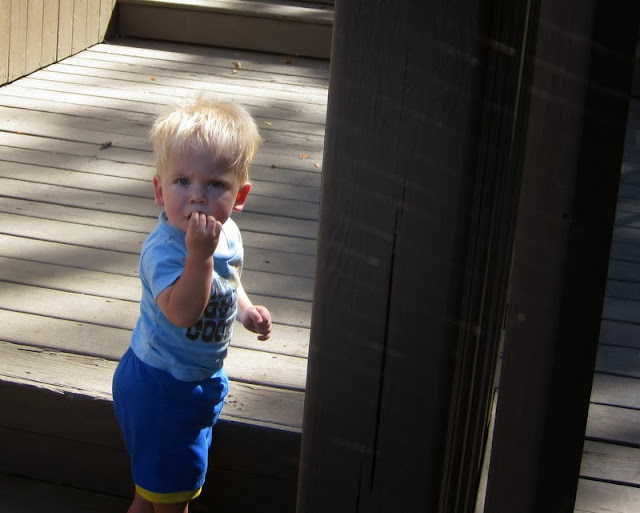 It was a huge web. 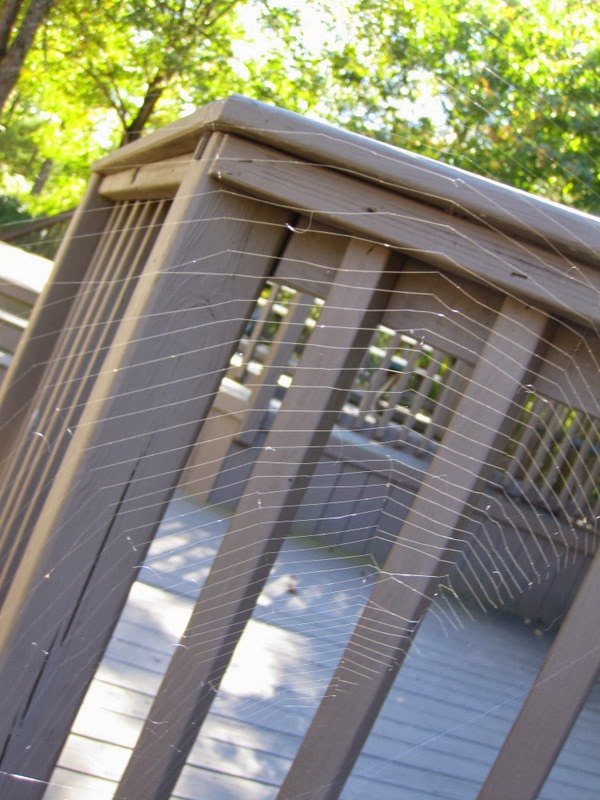 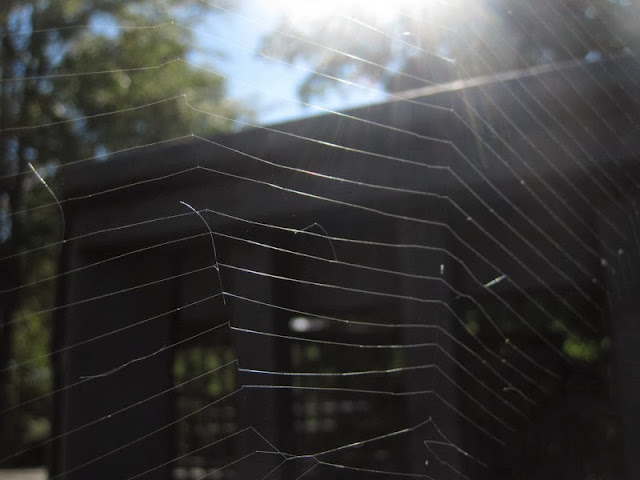 Here's Rachel standing in front of the web to help give you an idea of its size. 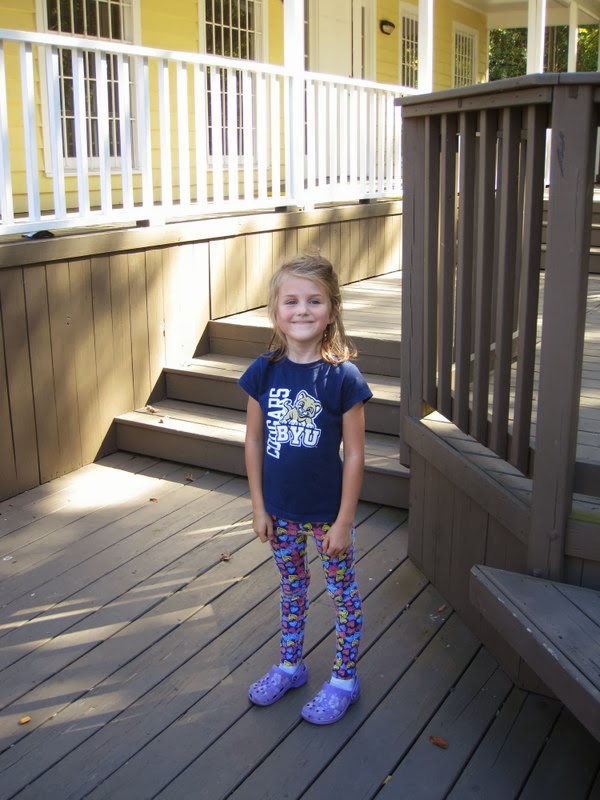 I suppose that only helps if you know how big she is; she's about four feet tall by now (don't ask me how that happened) and this web extends from the top of the brown railing on Rachel's left over to the white railing on Rachel's right. It reaches down to the ground and is also connected somewhere in the trees above us. 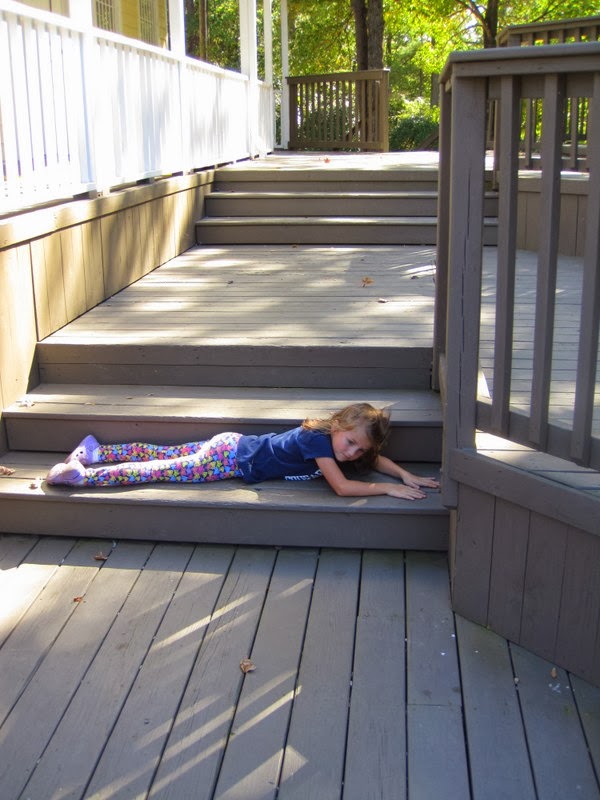 We even got to see a bug get caught in the web and the spider drop down, wind up the bug with silk, and carry it off to its lair. 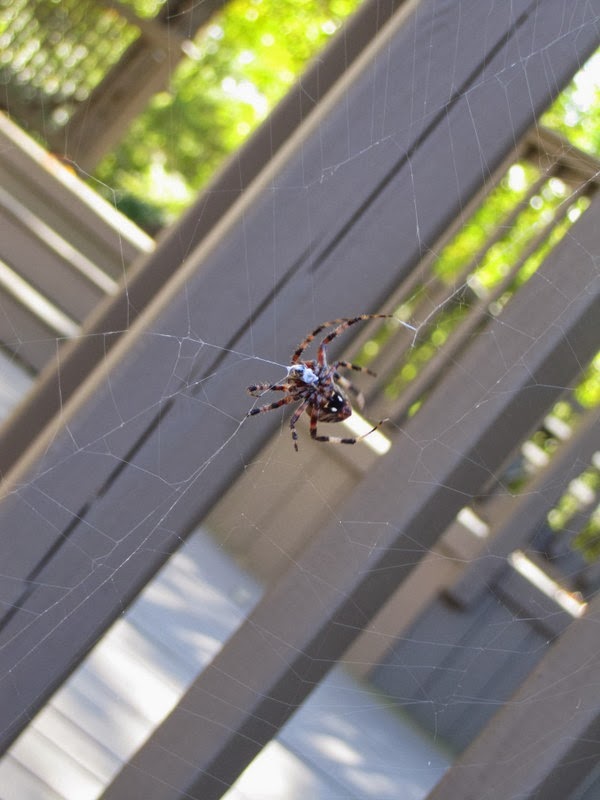 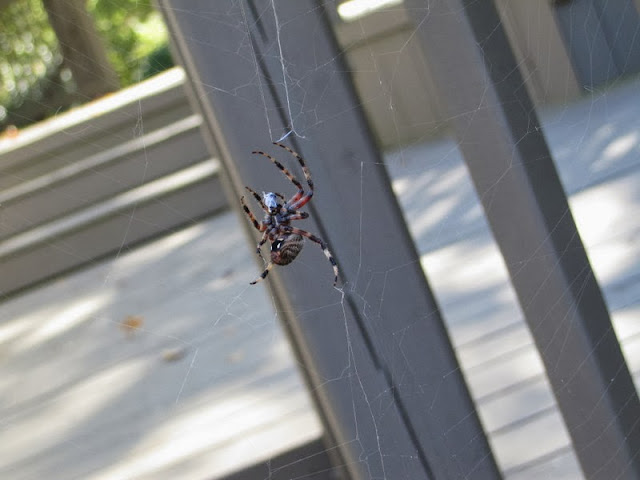 The swings were also draped in spiders' webs but I tried to just ignore them since they weren't exactly in the way. Benjamin likes swinging...to a point...and then he doesn't. He had started to fuss about wanting to get out when I sneaked off to take some pictures of that spider but when he saw I had the camera he gave me the cheesiest smile. 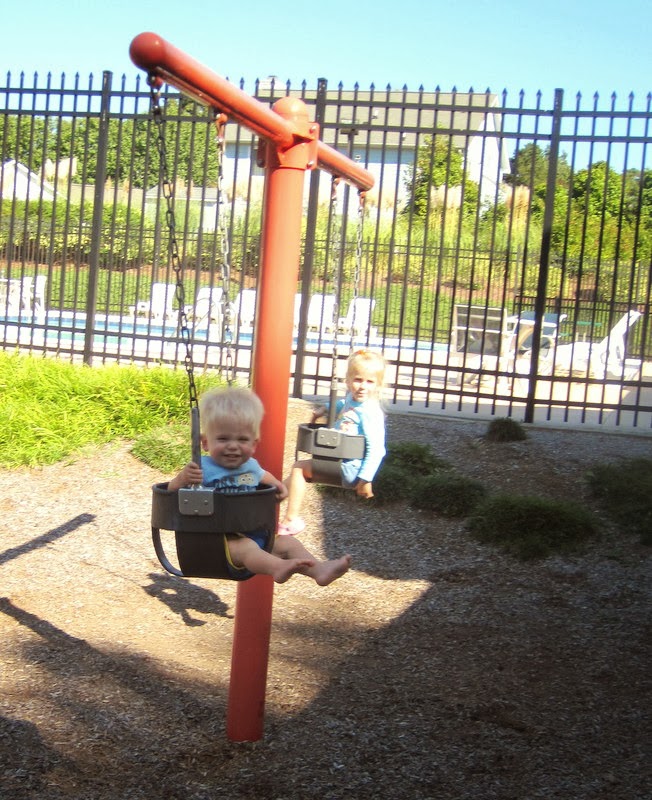 It's not the best picture, but it captured the moment. After he figured I'd taken his "cute" picture he began to squirm and whine to be taken out again. 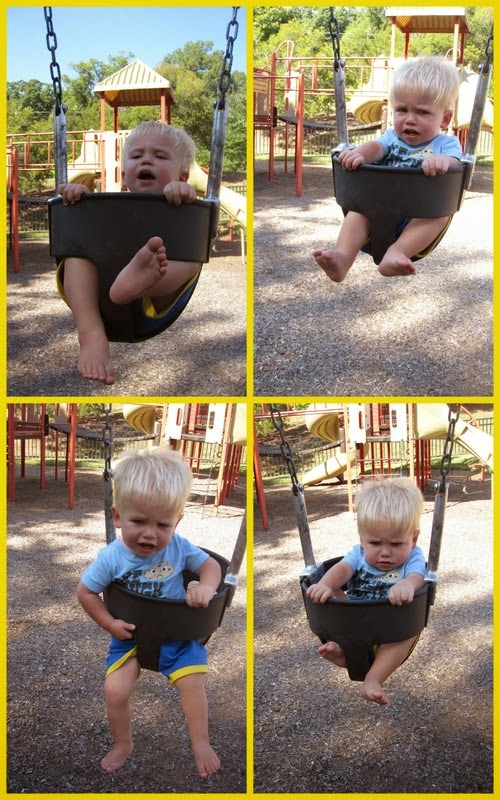 Here's Miriam enjoying a few more pushes in the swing. She could swing forever. 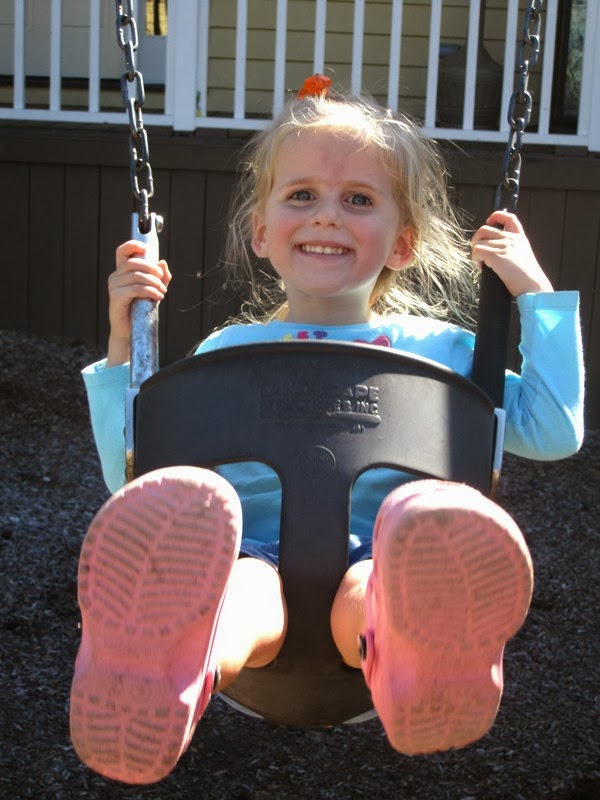 Here's a couple pictures of my beautiful Rachel-girl. She's growing up far too quickly! 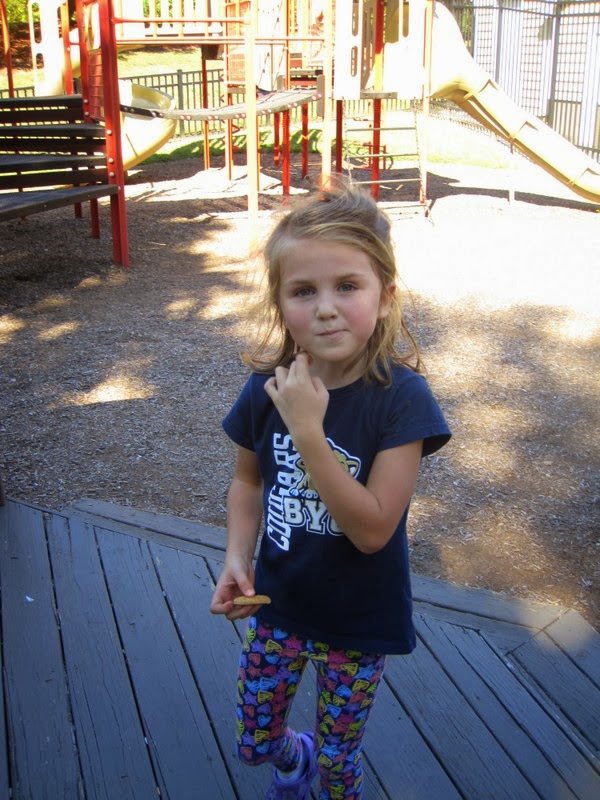 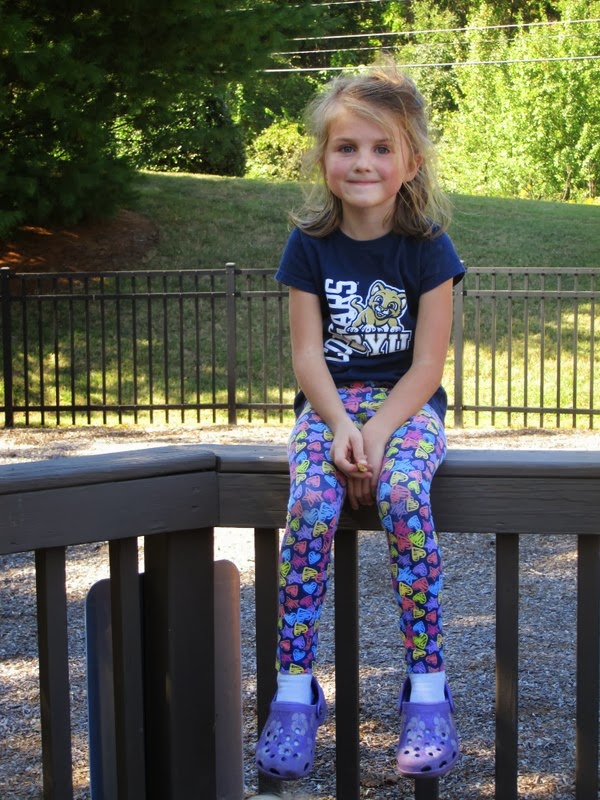 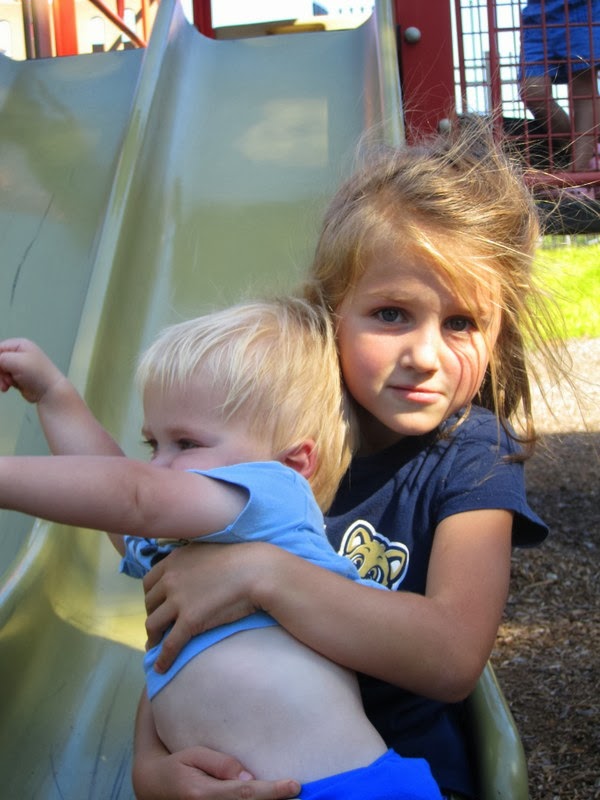 The girls were having a race down the slide while Benjamin was playing in the wood chips off to the side but he decided to climb on the slide just as they were starting their race. To her credit, Miriam has got good brakes! 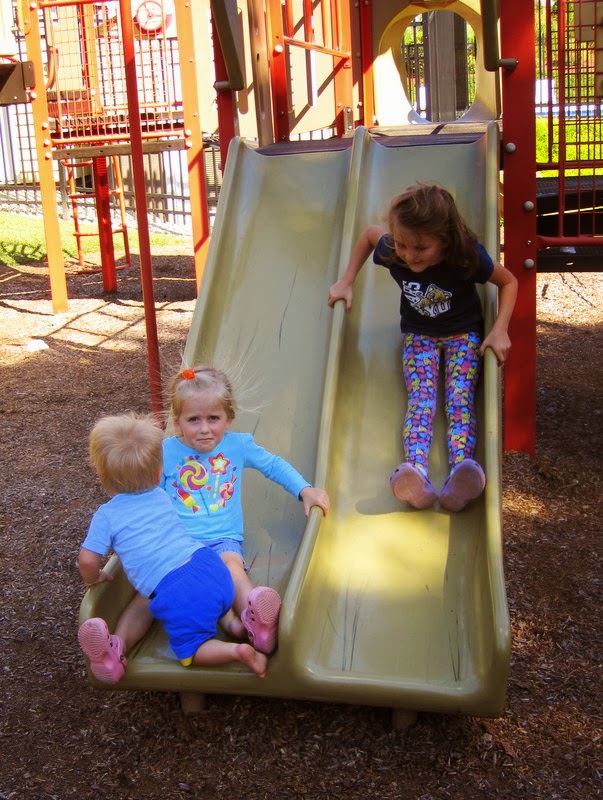 After playing a few rounds of tag Benjamin convinced us to head home for nap time. Benjamin went down for his nap willingly while the girls and I settled in for some quiet time, hoping to cool down. We were all still sweaty and sticky when Daddy got home from work and since he wanted to head toward Pelican's, anyway, so that he could pick his scooter up from the shop we all decided that a snow cone sounded like just the thing to help us finish cooling off.

Daddy parked at Pelican's and walked to the scooter shop while the kids and I waited for him while playing the games at Pelican's (corn hole and ladder toss). We were just sneaking up on this muskrat when Daddy came sneaking up behind us... 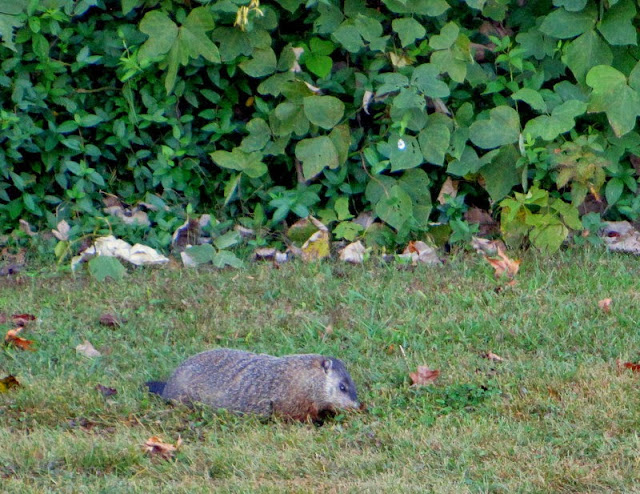 We ordered our snow cones and were on our way to the benches when a bee started buzzing around Miriam's cone. She started screaming and threw her snow cone up into the air. It landed on the ground and splattered all over. Before it had even melted into a puddle of sticky ice water, Miriam melted into a tearful puddle herself but before she'd had a chance to cry too long another snow cone was handed through the service window. They'd even managed to remember the flavours she'd picked (wild cherry and coconut). That was so nice of them!

Rachel had wild strawberry and tiger's blood and her lips ended up bright red. 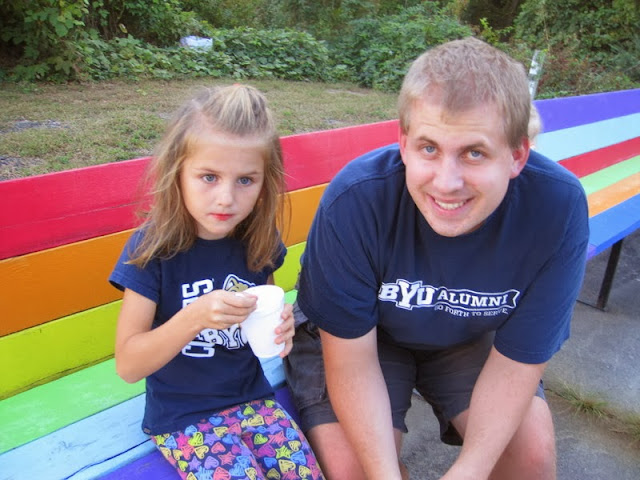 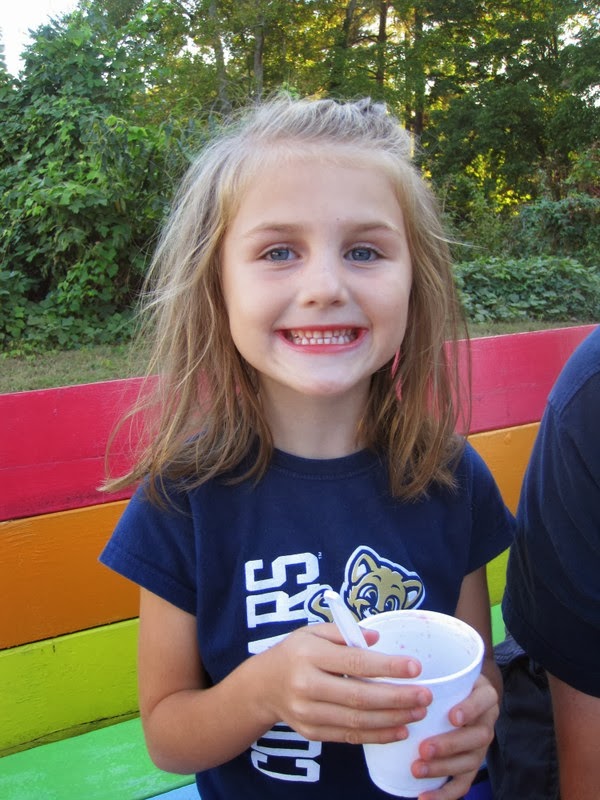 Miriam insisted that her tongue should be dyed red as well, but it wasn't. 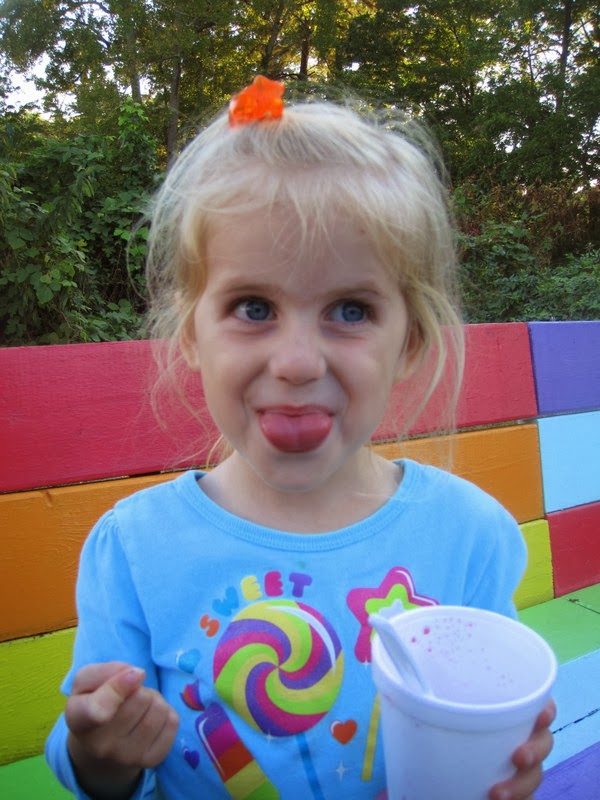 Benjamin wandered around taking bites from everyone. 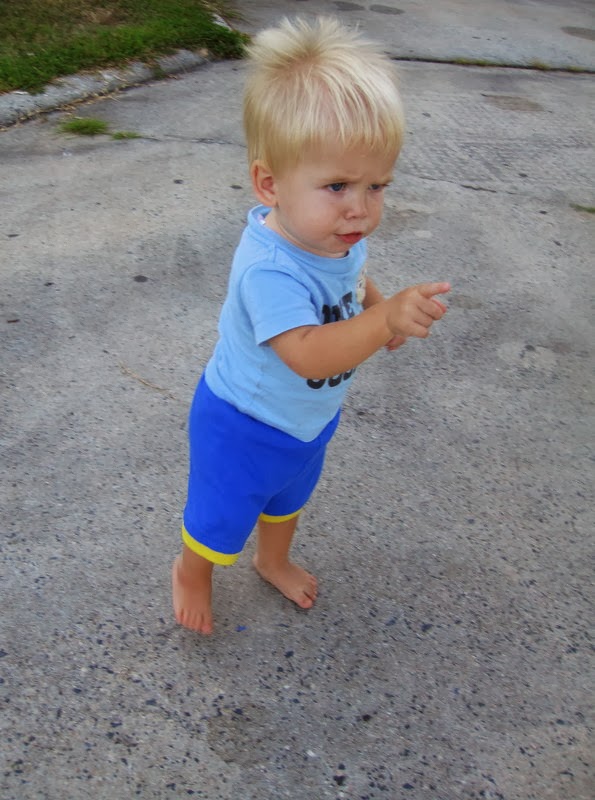