Andrew left for school early Thursday morning while the girls and I got up and got busy so that we could have everything packed up and ready to go by the time he came home for lunch. We had to pack our clothes and make some tin foil dinners as well as wash the cloth diapers and do a few other chores. We had everything just about finished when Andrew walked in the door and announced a change of plans: instead of all of us going to campus for his last class and leaving from there, he'd just skip class and we'd leave from home as soon as we loaded up the van (the lecture is recorded and put online anyway).

We pulled out of the driveway at 2:30 PM, which was the exact time we originally planned on leaving since his class is at 3:00 (though by skipping his class we earned a couple extra hours of daylight which proved to be invaluable). We arrived in Boone at around 5:30 and had just enough time to set up our tent and explore the campground before it started getting dark. 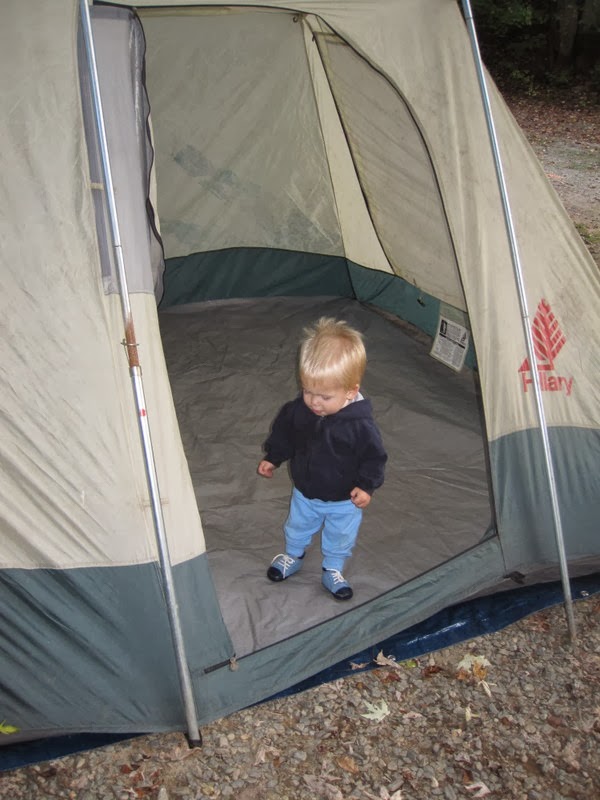 Our campsite was right next to the creek (which the girls insist is a river), which was both wonderful and worrisome. Rachel immediately claimed this spot as her "thinking spot" and spent hours down there. 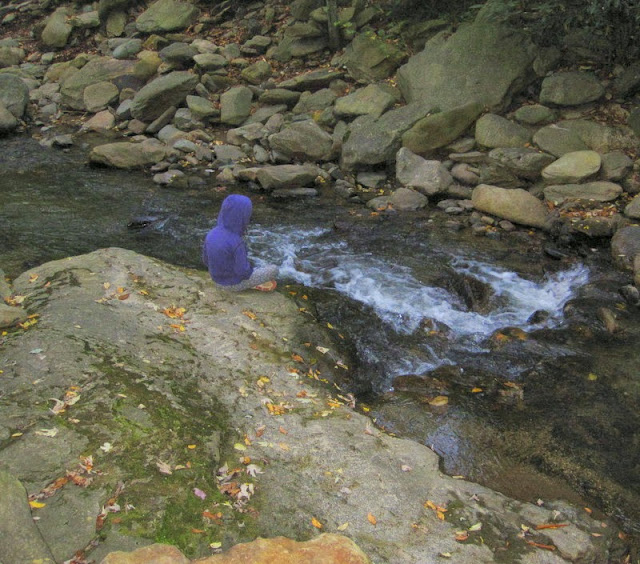 Miriam wanted to follow Rachel around everywhere, which was problematic because Rachel is much more capable at things (like balancing on rocks, for example) than Miriam is. Benjamin, meanwhile, settled in to what he seemed to think was his true calling in life: throwing rocks into streams. Keeping track of them all was a bit of a nightmare. Eventually we sent the girls to the playground (across the creek) and stuck Benjamin in the pack'n'play for safe keeping (which he was not happy about one little bit).

We stayed at Flintlock Campground, which was really quite lovely, though our tent spot was a little gravelly. We were hoping for a grassy spot (the spots on the other side of the creek are grassy) but since we waited so long to make our reservation we were just able to snag the last available spot. It was on the same side of the creek as the bathhouse, which was convenient for a family with three small children, but we had quite the time trying to stake our tent (which will not stand up unless it's staked down first because it's an old, wonky tent we got from someone on Craigslist).

Eventually we got a stake in each corner of our tent and once we had it erected we placed some big stones by the tent poles to keep them in place since driving them into the ground was going to be impossible. Once we were confident that it wasn't going to collapse on us in the middle of the night we started on dinner.

Andrew's original plan involved stopping for hamburgers somewhere along the way since we weren't planning on leaving until 4:30 (which would have put us at the campground around 7:30) but since we got there early I suggested we just eat one of the other dinners we had planned, since we didn't know how long our cooler would keep things cool anyway. We decided on the tin foil dinners I'd made that morning.

We'd hauled in our own firewood (donated from a friend in the ward who had a tree chopped down) and Andrew tried for a long time to get a fire going. And then I tried. And then he tried again.

It was textbook fire building but no matter how well we set up our fire it just kept fizzling out.

Eventually we gave up and emptied the contents of our tin foil dinners into one big pot and made stew on the camp stove (which meant that everyone got green peppers in their stew (which no one was very happy about since only my tin foil dinner had included peppers)) and by 8:30 we were sitting down for dinner.

It was a rather chilly night so we filled the kids up with hot chocolate before sending them to bed.

Andrew and I stayed up and watched an episode of Dr. Who (because the night before we'd watched a cliff-hanger episode (so rude!) and were dying to see what happened next) before joining the kids in the tent. I was freezing all night long but the kids were nice and warm in their footie-jammies! The girls were both so warm that they kicked off their sleeping bags in the middle of the night. We only have two sleeping bags, so Andrew and I were just in a jumble of blankets that kept falling off (because we were sleeping on an incline). I switched things around subsequent nights so that we had the sleeping bags and the girls were in the jumble of blankets and we were all much happier (at least in my case; I think the girls weren't much happier—they were simply the same amount of happy).

Benjamin, naturally, didn't sleep as well as he does at home (which truthfully isn't that great, either) and spent quite a bit of time fussing. But that blasted tooth that we've been waiting for finally came through our first night camping and he was a much better boy after that (his poor gum, which had been so swollen, looked much healthier after his tooth broke through).

We basically had the campground to ourselves on Thursday night, which was wonderful! It got a little crowded on the weekend. Boone is a pretty big town, which we were surprised to find out. We were sure we were headed to the middle of nowhere. Boone is in the middle of nowhere, but it's definitely somewhere in the middle of no where. Appalachian State University is there, so it's a college town that reminded us quite a bit of Rexburg, but it's also a bit ski-resorty like Park City. All the privately-owned campsites were packed due to the government shutdown (which is the entire reason we a) went camping rather than taking the trip to DC like we'd initially planned and b) ended up in a more-expensive, privately owned campsite rather than a cheaper site at a national forest). I'm sure I'll complain about the government shutdown some more later but all in all we were very well pleased with our little trip to the mountains!
Posted by Nancy at 10:23 PM