Halloween isn't even until tomorrow and we're already laden with candy and have gone out in our costumes three times!

The first time out in our costumes was Saturday night. We went—rather late—to our neighbourhood Halloween party. The flyer said it would go until 8 PM so we went out to dinner with a couple in our ward (who are aching for grandchildren and felt sorry for me being left alone with sick kids all weekend) before donning our costumes and heading over to the clubhouse. But when we got there we found the party was over. Everyone was cleaning up and heading home. And it was only seven o'clock!

The girls were a little disappointed until the organizers rounded up some lollipops and some glow-in-the-dark bracelets. 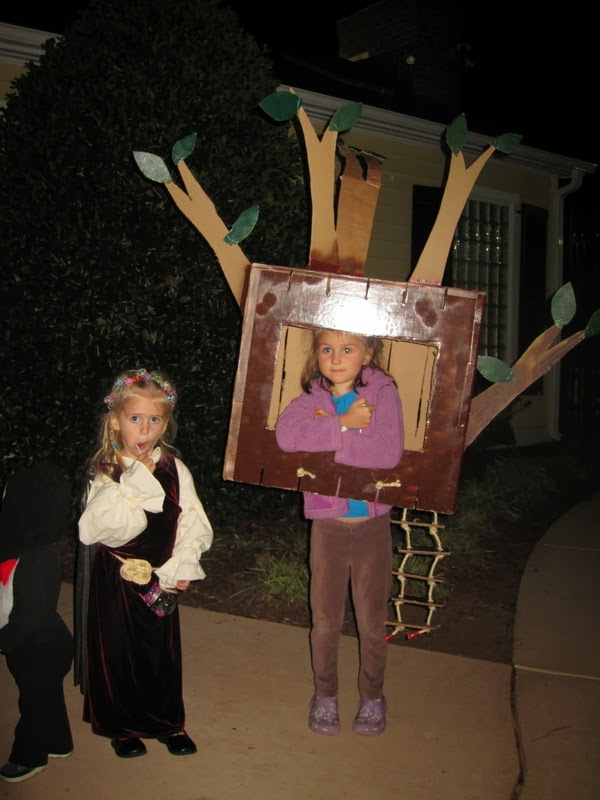 Rachel is Annie in the Magic Tree House. Her costume took several afternoons to complete but it was worth it because it's wildly popular and because we had such fun making it. We bought some spray paint and a coil of rope for her costume at a local super-discount store. I think we spent a grand total of $4 on her costume (spray paint isn't entirely cheap).

Miriam is Queen Lucy. She's wearing a pirate shirt that I picked up at a stuff swap and a jumper of Rachel's (that I picked up at a stuff swap). For accessories we used some of the same rope from Rachel's costume to make a fancy belt and tied a baby food jar (with beads glued on to make it fancy) for the cordial of fire-flower potion. Her crown is made of some flexible wire ($1 at the same store mentioned above) and some beads. Her cape was made from some fabric someone gave to me when my family lived in High River (so I've been lugging it around for more than a decade).

At first Miriam was worried that she wouldn't be able to be Lucy because she doesn't have short brown hair (like Lucy does in the movie) but I reminded her that in the book, Lucy has long blonde hair:


But as for Lucy, she was always gay and golden-haired, and all princes in those parts desired her to be their Queen, and her own people called her Queen Lucy the Valiant.

I don't know why my girls are so hung up on hair colour (Miriam can't be Hermione when they play Harry Potter, nor can she be Ginny. She can only be Luna Lovegood. Little House on the Prairie roles are also most often cast by hair colour). I've tried to get them comfortable with taking artistic liberties but they're all about authenticity.

Benjamin is a penguin. 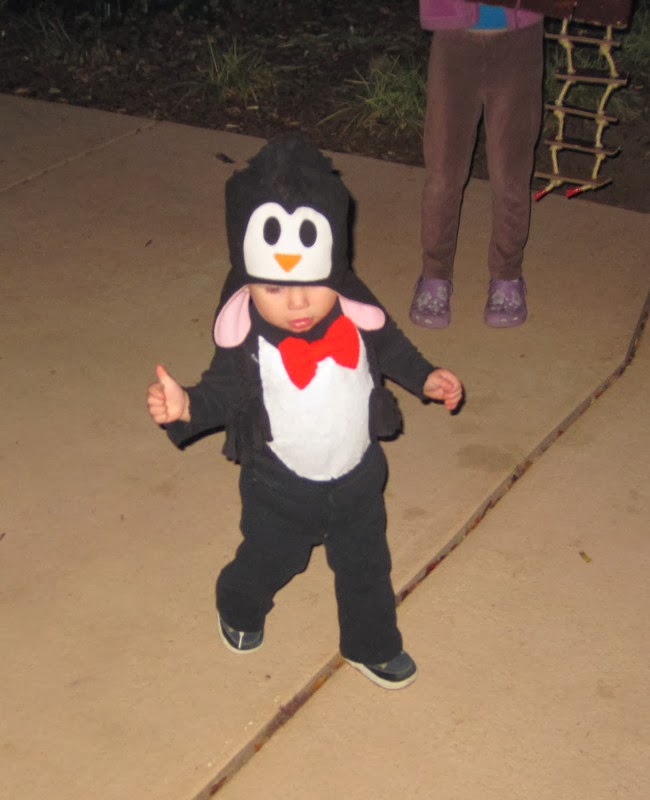 Miriam was a penguin three years ago. She wore the exact same outfit, minus the bow tie. I added the bow tie because this outfit was in the attic when I decided Benjamin could recycle-wear it and I guess I remembered rather incorrectly about how non-unisex those black clothes are—with the flare-leg pants and ruffle-sleeved shirt. A bow tie helped make this costume a little more masculine and he ended up being (almost) the cutest penguin in existence.

He ties only with Miriam, of course, who was also the cutest little penguin. Miriam and Benjamin look so much alike!

On Monday night we went to the "Math Masquerade" at Rachel's school. She had a sneak-peek at the activities they'd be doing in the gym at the math party during PE so knew not to dress as a treehouse (there was a climbing wall—and once you got to the top you had to read the math problem and solve it). Instead the girls revisited last year's costumes (Miriam is Angelina Ballerina, Rachel is Hermione Granger). Benjamin was still a penguin. 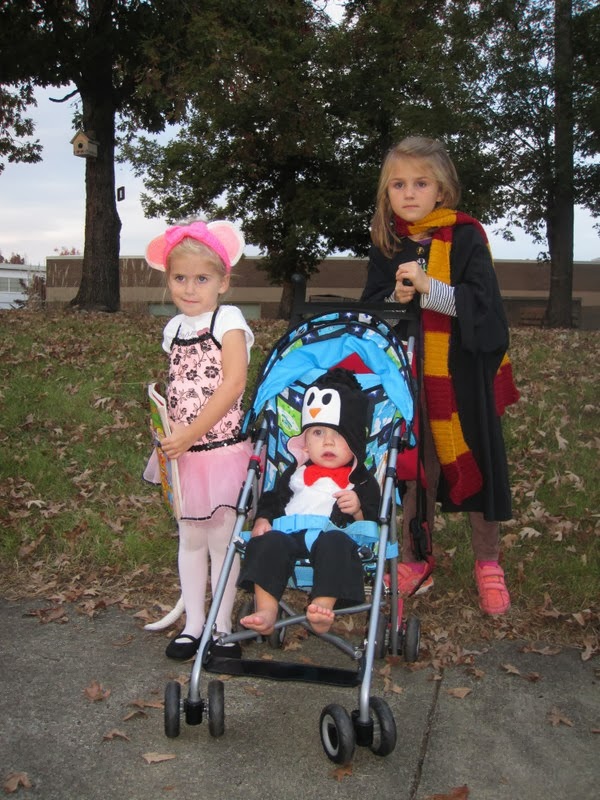 The girls had fun playing math games while Benjamin and I sat in on a parent meeting discussing the new math standards.

"Look what I got at school!" she beamed jubilantly.

"Oh, wow!" I said, trying to let enthusiasm mask my puzzlement. "What for?"

"I guessed the closest number at the Estimation Station!"

One of friends at church won something like 184 tootsie rolls because he'd guessed the correct number of that item. Frankly, I prefer the pencils especially since we had our ward Trunk-or-Treat tonight (and are still planning on doing a little Trick-or-Treating tomorrow).

Rachel was still apprehensive about wearing her Magic Tree House costume to the Halloween Party tonight because it's so bulky, so we Annie-fied her the best we could, throwing pig tails into her hair (which is, unfortunately, brown, not blonde (Annie has blonde hair, you see)) and slapping a backpack on her back. That way she'd still be "in costume" without having to be in the treehouse. 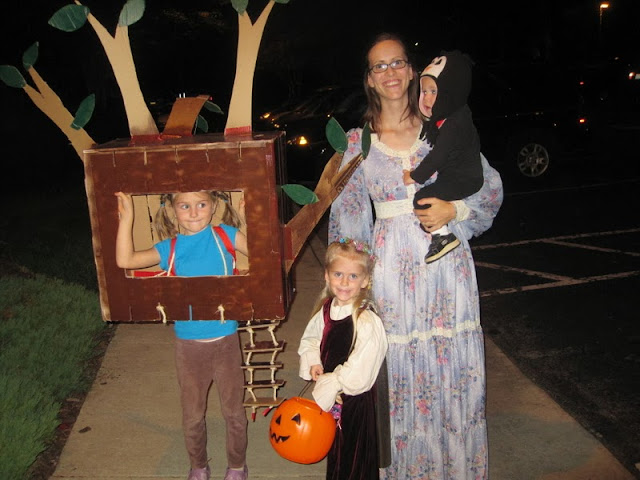 I'm wearing a dress of my mom's that I haven't worn in ages. The last time I tried it on was Halloween 2007—three months after having Rachel—and it didn't fit so I figured it would never fit again. But I tried it on when I was in the attic hunting around for Benjamin's penguin costume and it fit just fine. I guess I shouldn't be surprised that the dress didn't fit in 2007 because I had just had a baby (and didn't realize how long it takes for things to readjust once the baby's born). I haven't been pregnant for nearly seventeen months now so it's fairly safe to say my body is approaching its normal prenatal state (which is a whole new thing post-baby (just for any first-time moms reading this who are under the delusion that their bodies will ever be the same again—it's not going to happen (but it's worth it))).

I was a bit of a split personality for Halloween. Both girls wanted me to dress up in their storyline, so I am either Queen Susan of Narnia or Morgan Le Fay, depending on who you ask. If we really want to squeeze Benjamin into the story, he could be a Narnian Penguin or he could be from the book The Eve of the Emperor Penguin.

Truthfully, though, our costumes weren't coordinated at all. Rachel won a prize for having the most creative costume (and she was ecstatic about this) but she became suddenly interested in coming up for a family theme for next year when she saw what our primary president had done—she and her husband dressed up as ghostbusters and their three kids (including their little new baby who hasn't even been out of the hospital for a month (the one with HSV; but he's doing great now)) as ghosts. Rachel thinks Andrew and I should dress up as Santa and Mrs. Claus and have the kids dress as elves, but Andrew is vehemently opposed to this idea (because (a) it involves dressing up and (b) it would put Christmas-stuff prior to American Thanksgiving, which is a huge no-no in his book). Miriam is also not fond of the idea of being an elf, simply because "she hates elves."

Anyway, we had a good time at the Halloween party. Rachel figured out how to eat a donut off a string (the trick, it seems, is to approach the donut from below) and the girls enjoyed playing plinko, going fishing, making a craft, and throwing balls at cans. 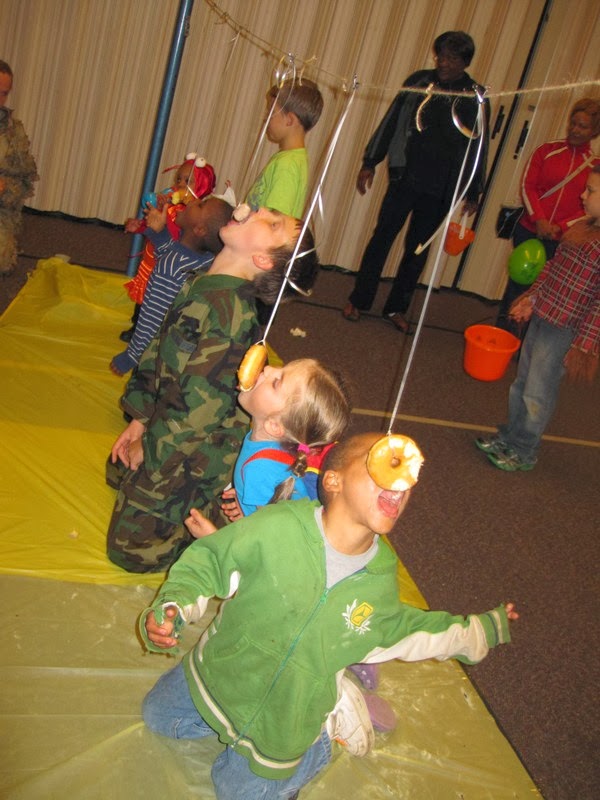 For the adults (and everybody, really) there was a table laden with pumpkiny desserts as well as hot apple cider. I made pumpkin bread with Miriam this afternoon. She was the stirrer and I was the "ingredients-er," which means I measured the ingredients.

We participated in the costume parade before heading outside to Trunk-or-Treat. 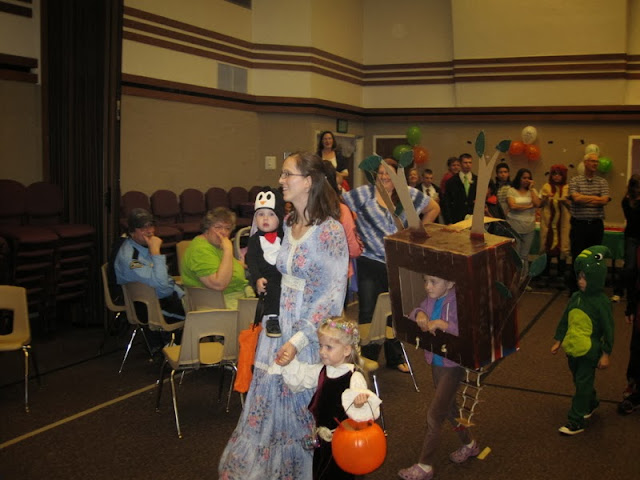 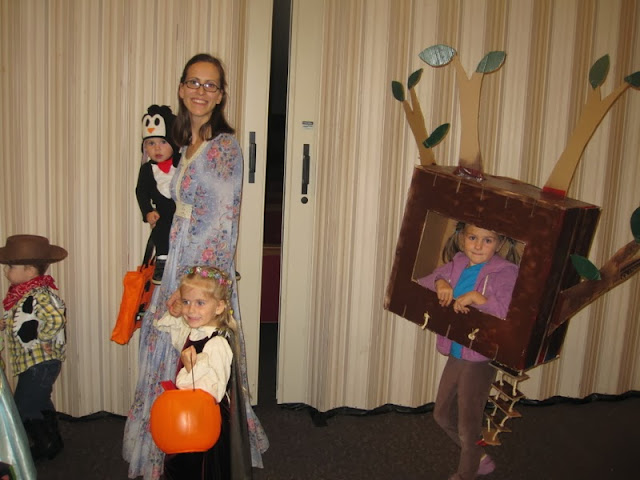 Our trunk didn't win any prizes this year. I didn't have the energy to plan anything elaborate (between the funeral (and Andrew being out of town for the funeral) and Miriam's birthday and building Rachel's treehouse costume I had enough on my plate the last couple of weeks) so we just took our ghosts and skeleton down from our tree in the front yard and hung them on our back hatch instead. Many of the medics in our ward (and their children) were critical of our milk-jug skeleton (she's missing many, many bones) but we love Rose-Flower anyway, even if she wouldn't have been able to walk or move her hands had she ever been alive. 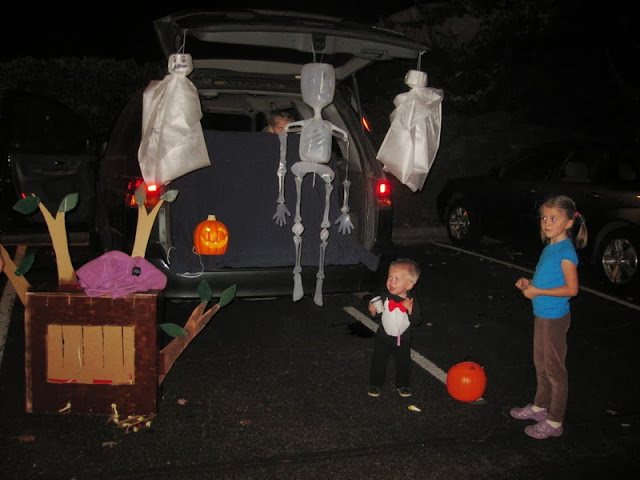 There was some pretty tough competition this year, anyway. One family dressed their car up as Cookie Monster (and they only got second place, so...). Rachel's primary teacher (who also brought her award-winning peanut-butter cake (first prize at the state fair last week)) made homemade root beer to pass out to the trunk-or-treaters. It was delicious! This precious penguin couldn't get enough of it: 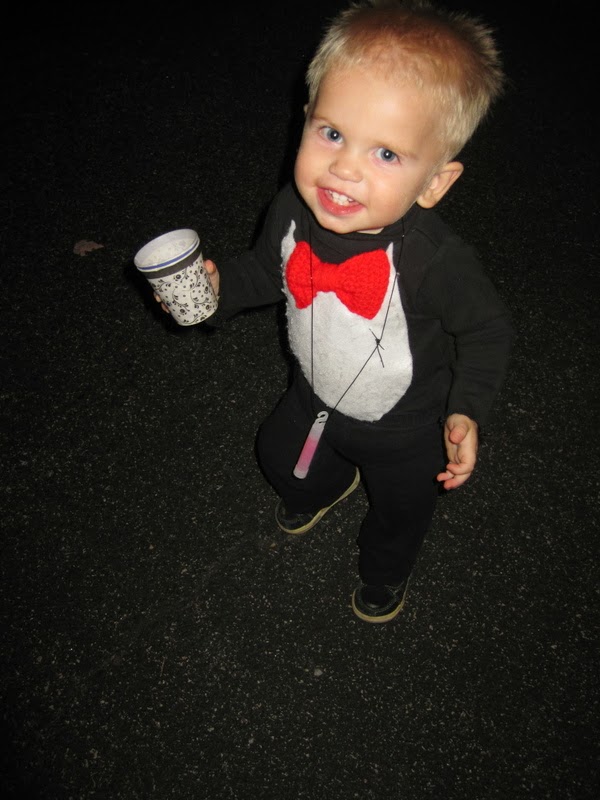 Andrew's been wanting to make homemade root beer for about a year now (with dry ice, not bottled like his Aunt Dorothy makes it) but it just doesn't seem to be a thing here. We haven't been able to find root beer extract anywhere so Andrew "imported" some from Utah when he flew home yesterday. So I had to ask Rachel's teacher where she found root beer extract.

She told me that she can sometimes find it at Harris Teeter and sometimes at Wal-Mart and that she just buys it whenever she sees it because there is no guarantee it will be available when she's looking for it. My friend Aimee said that she once asked at Kroger why they didn't stock it and if they would consider stocking it and she said they gave her a strange look and said, "No. That's not something there's really any demand for."

At least we have some now. And I love the idea of doing something fun like that for a Trunk-or-Treat! I feel like real Trick-or-Treating is so "safe" now that neighbours can't hand out cookies or candied apples like they did "in the old days" but a Trunk-or-Treat kind of brings back that trust since we knew and trusted everyone there. I wasn't the least bit nervous that Rachel's primary teacher had slipped something dangerous into our drinks. We'll still go Trick-or-Treating though because I think it's a great way to get familiar with our neighbours (since I don't usually just knock on their doors and chat them up).

I'd better stop writing now and start cleaning my house. It looks like Halloween exploded all over the living room and we still have to deal with Halloween tomorrow!
Posted by Nancy at 11:01 PM