Since today is Miriam's birthday it only makes sense that I should blog about Benjamin, right? Of course right. After all it's just nine days before he's seventeen months old (what?! (but only 15 months, adjusted)).

He's still not much of a talker, though we're really working on remedying this. His most consistent word is still "MOM!" which he yells whenever he needs me, if he thinks to talk at all (otherwise he just yells to be loud/noticed).

Since he doesn't seem to be interested in talking, we've been working on signing. The girls have been happily (re-)learning signs in order to help Benjamin communicate. He can now sign his own personal version of dog, bird, all done, more, potty, and fan. There are probably a few others I'm forgetting.

Mostly signing is going great except that the girls are constantly mixing up the signs for 'mother' and 'pig.' I'm not so sure how I feel about that.

Oh, 'shower' is another sign Benjamin knows. Benjamin lives for the shower. He can open the door to the shower by himself and will escape there any chance he gets. He's even asked for "wa-wa" a couple of times after climbing in the shower. 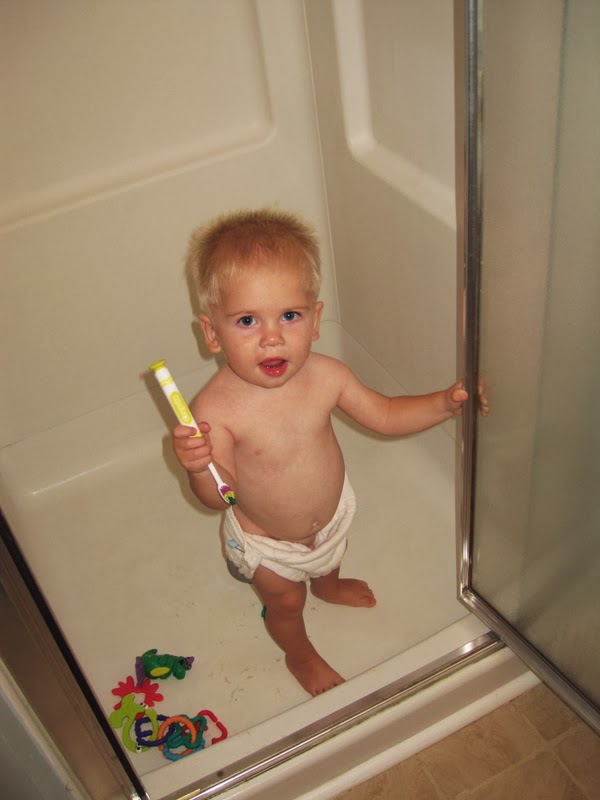 This morning I asked him if he wanted to shower with me and he could hardly contain his excitement. He gasped and looked up at me with bright eyes and a big smile before running into the bathroom and hopping into the shower (fully clothed). He was upset when I pulled him back out but calmed down when I told him that he just had to take off his clothes. He lacks the dexterity to do so (unless you count socks...and diapers) but pulled at his clothes with all his might.

During story time tonight we caught a video of Benjamin saying 'boo!' All three of my kids have enjoyed this Halloween Countdown book. I don't know what we'll do if it ever falls apart!