We were sitting in sacrament meeting this morning when Andrew passed me his phone. It was a message from his dad, sent just after we'd finished the sacrament (and received while Andrew was in the hall helping Rachel with her nose): "Sharon has been hospitalized with a serious case of septic shock and will likely die in the next few hours, if not sooner. We will keep you all posted. She was fine up until Thursday. Hospitalized late Friday night and will die today, They are only keeping her alive for Judy to arrive at 1:00."

At the beginning of the month Grandma Sharon had called the family together to tell them she'd been diagnosed with lung cancer, but that the tumour was thought to be contained, and that she'd be having surgery to have it removed. She asked all the Heiss boys to give her a blessing, and they did so. She went through with the surgery and it went wonderfully. Doctors were able to remove the entire tumour and after a few tests concluded that she would have no need of any follow-up therapy (no chemo, no radiation). It was a breeze, all things considered.

She came home on October 11th and spent the next little while recovering. This weekend, I guess, she was feeling well enough to head out to Park City, where she and Grandpa Frank often go to get away from it all, for a post-operation vacation. But Friday night she took a turn for the worse and by last night her bodily systems were shutting down one by one.

Her daughter lives in Louisiana, and had only just gone home after flying out to Utah for the lung cancer operation. We were all feeling so blessed that she'd had such an easy surgery and recovery. And then...this. It was quite the surprise.

I was thinking about her while the choir was singing More Holiness Give Me. I think Sharon embodied this song well. She spent her life striving for more. At seventy-two years of age, she was one of the busiest people I knew!

Frank and Sharon served a mission in Lebanon about ten years ago; they left for their second mission to Germany in 2006 and were terribly disappointed to miss the birth of their first great-grandchild but charmed us with stories of their travels through the region they were over (they were in charge of training Senior Missionary Couples serving in Albania, Croatia, Moldova, Romania, Serbia, Slovakia, Egypt, Jordan, Lebanon, and Syria—in fact, they became so well-known in the region that we could hardly attend church anywhere without people asking us if we knew them; even our pediatrician in Egypt (who was a muslim-partner with the church's neonatal resuscitation program) knew who they were). They came home in May of 2008 and we met them at the airport.

Even after traveling for a full day, Sharon was so excited to see her family: 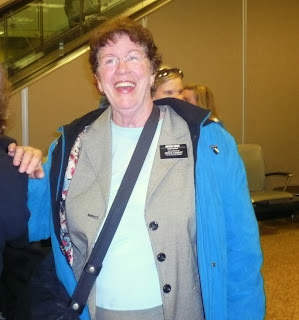 Rachel was terribly afraid of Grandpa Frank and Grandma Sharon, preferring to snuggle with those she knew best, but cousin Kayl was willing to give away snuggles:

Grandma Sharon had hardly managed to unpack her bags when she volunteered to serve a mission in the Church Office Building doing all sorts of things, while simultaneously taking care of Grandpa Frank, who needed a series of operations after they got back from Germany.

We only enjoyed a couple of months with them before taking off to Egypt, but we did enjoy a few family functions (which Grandma Sharon could always be counted on to attend), such as Rachel's first birthday party:

Grandma Sharon and Grandpa Frank drove down to Orem to visit us the morning before we left for Egypt, as well. Rachel was still unsure about those two... 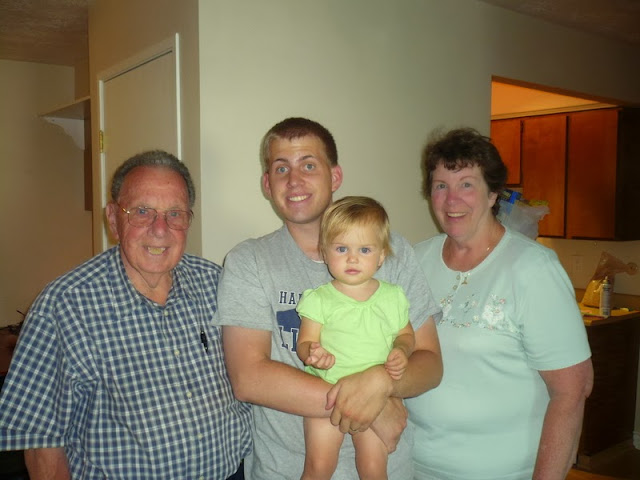 While we lived in Egypt, Grandma Sharon continued to send us emails full of thoughts and well-wishes, and packages full of surprises for our girls. Grandma Sharon loved to give gifts.

She was determined to win the hearts of my two little girls the minute we set foot back in America. She would visit them on their birthdays, and other special days in between. She held Christmas parties at her house. And sometimes she invited us over for no reason other than to get a chance to play with the kids. I think being a grandma (or great-grandma) was something she loved best of all.

Here she is visiting with Miriam on Miriam's second birthday: 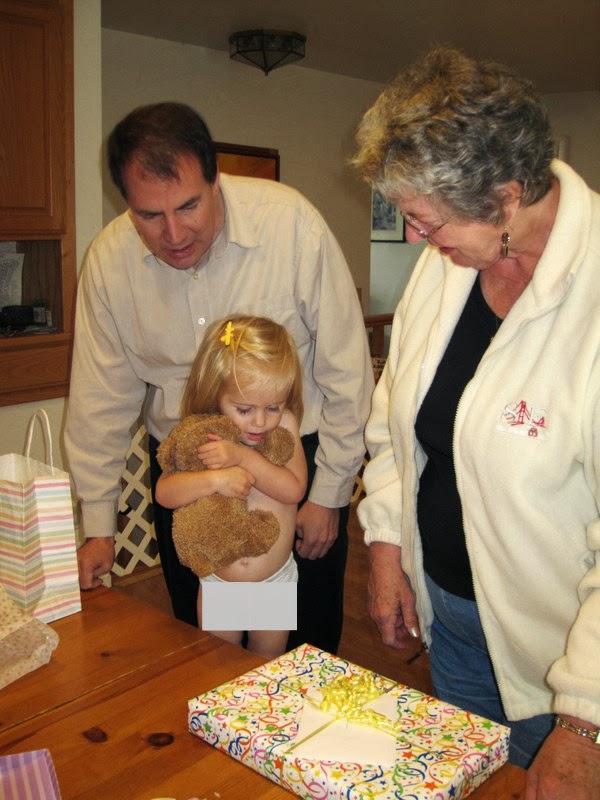 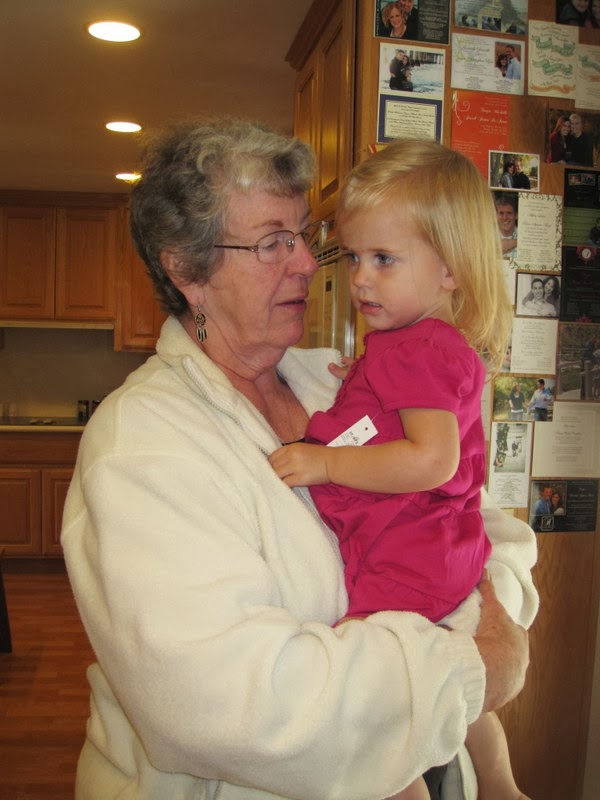 When Benjamin was born, Grandma Sharon was so worried that she hadn't finished his blanket in time (as if that was her fault—he should have given her eight more weeks!) so she put together another gift and came by to visit him (since we weren't really in the mood to go visiting anyone). 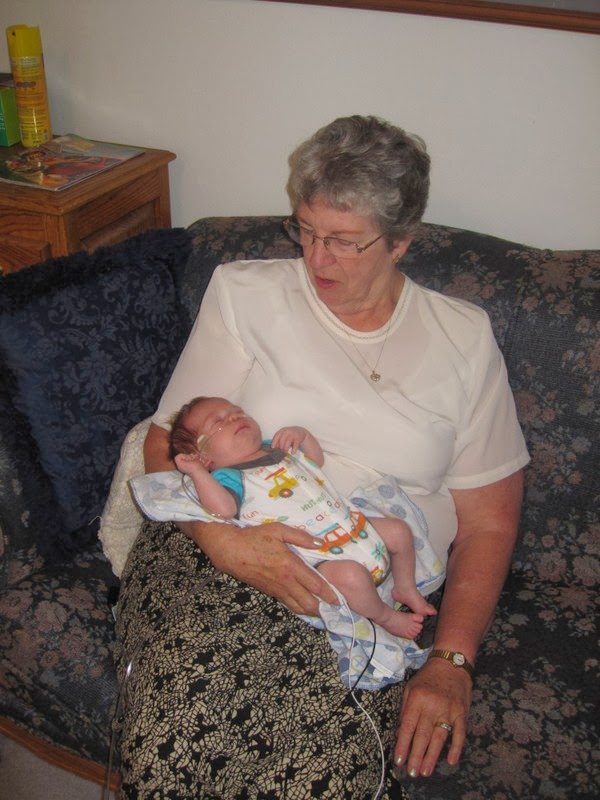 Grandma and Grandpa seemed to be coming down every few days for a while: with Benjamin's blessing and Uncle Jacob's homecoming and Rachel's birthday party falling in the same week. But they made the trips happily enough; they adore their great-grandbabies.


They came by again to say goodbye just before Benjamin and I left for North Carolina and drove non-stop from Lake Tahoe to come see Benjamin and me when we visited Utah in April. 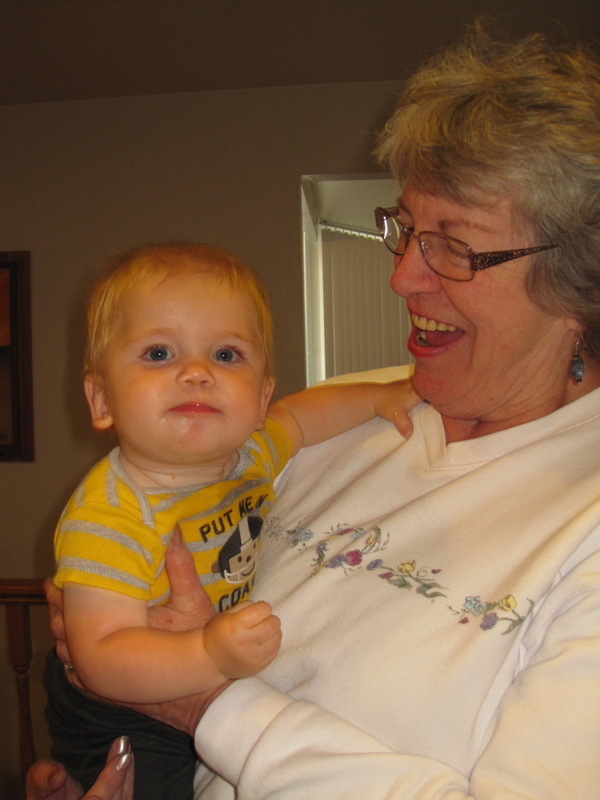 Grandma Sharon was very family-oriented, holding family Christmas parties, Thanksgiving dinner, game nights on Sunday nights, and many visits in between. She wanted to know about every performance, every graduation, every little milestone. She loved getting together with the family (at least, I think she loved it)!

She was a wonderful companion to Grandpa Frank, who I hear has been taking this remarkably well, though I'm sure it was quite a shock to him. Both he and Grandma Sharon always thought he'd be the first to go (since he's twelve years older than she is), but now it's he who will be alone.

When I was transcribing Grandma Sharon's life history, I thought it was fun that with her and Frank's combined families they had three girls and three boys, which was the exact family she'd dreamed of having when she was a little girl, so even though she had to wait until she was a grandma to collect the rest of her five children (who were all grown (and mostly with families of their own) by the time Frank and Sharon were married) she thought it was just perfect.

She's got a baker's dozen of grandchildren and also has six great-grandchildren: 3 girls and 3 boys (Rachel, Kayl, Miriam, Talmage, Benjamin, and Charlotte). As far as I know there's one more great-grandbaby on the way (Auntie Emily is due with a boy in January).

I was so upset when Dorothy died this summer—for various reasons, but more specifically because when I had been out there in April I wanted to visit her but she was out in Washington visiting her girls.

"I'll just visit with her the next time we're out here," I said to myself.

And, oh, how hard it is to think that there isn't going to be a next time. At least, not for a long time.

My mom said that she's felt those pangs of regret—of wishing to do something for or with someone only to have them die and thus never being able to make up for it. That's hard.

I'm so glad that I was able to send Grandma Sharon a little get-well card in the mail when she had her surgery. Anyone who knows me well knows that I'm terrible with snail mail—I'm wonderful at writing letters but terrible at mailing them (sometimes I think email was invented just for me)—so it's really quite amazing that I got the card into the mail in the first place. But now I'm so glad that I sent it to her, that she got to read what I wrote and see the pictures the kids sent for her before she died because we won't have the chance to mail anything to her again.

At 4:30 this afternoon (2:30 in Utah) we got the call saying Grandma had passed on. We'll miss getting her Christmas packages and birthday cards. We'll miss being pocket-dialed by her time and time again. We'll miss her happy smile and the wonderful influence she had in our family. We'll always be grateful for the memories we shared with her and the example she set for us.
Posted by Nancy at 7:46 PM