Paint, Popcorn, Mantises, and other things

Rachel brought home some beautiful pieces of artwork this week. If there's one thing I'm loving about this school year (and I'm not loving one thing about this school year—I'm loving many things) it's that the flow of papers coming home has slowed to a trickle. It's glorious. I mean, we're still drowning in paper over here just not anything like we were before. Those pieces of artwork, however, inspired Miriam to paint.

I let her nag me about it for a couple of days before getting everything set up for her. That way she felt like it was really special, right? Painting is just so messy that I tend to put it off until my children act like I'm ruining their childhood. And perhaps I am.

Miriam and Benjamin had such fun painting together... 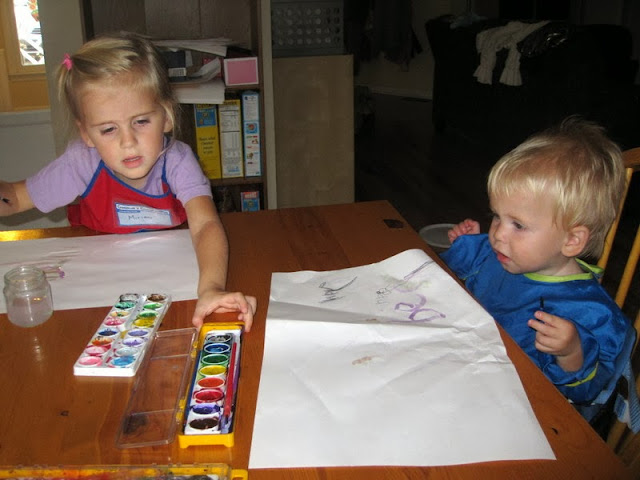 ...though he wasn't impressed with how she kept moving the paints farther and farther away from him. 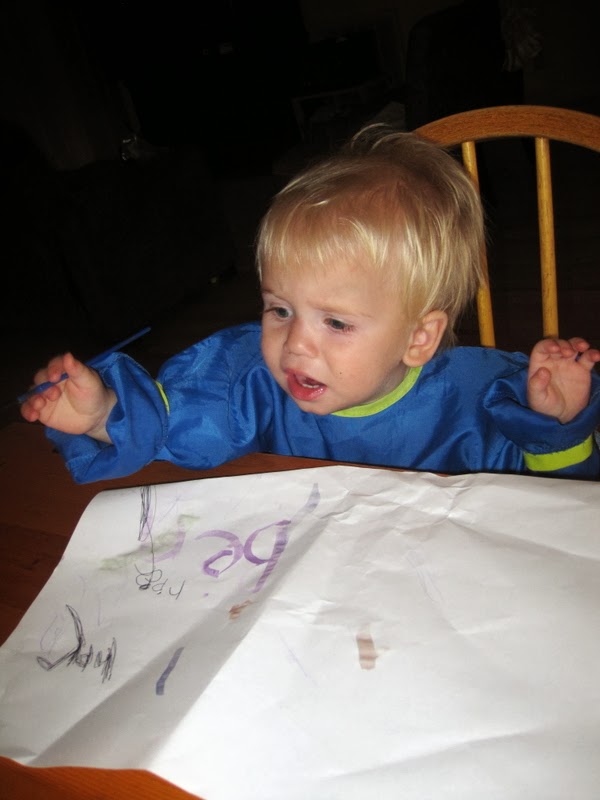 Here is Miriam with her finished product: 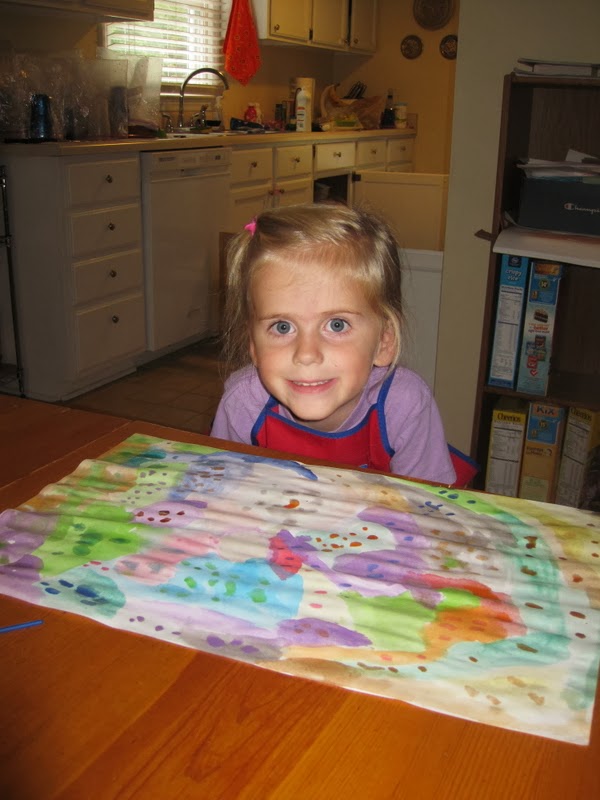 We put up our fall decorations, which include these window clings we picked up last year on super clearance at Michael's, I think. Benjamin finds them fascinating and wanders around the house looking at them. At this particular moment he was leaning back on the window—backing into things is one of his new favourite pastimes. 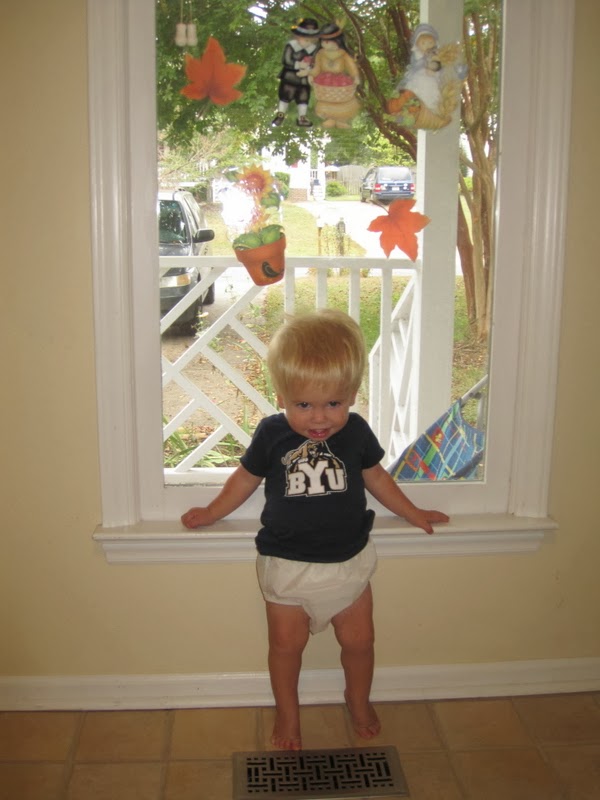 We went to the park the other day. Rachel wanted to practice doing some "backflips" and specifically requested that I take a video of her doing one, but you have to watch the video at least three times in order to catch what the other two are doing during her backflip. Benjamin, who climbs up one stair, and then back down, and Miriam, who does some kind of wild shimmy on the slide. Rachel's backflip was pretty impressive, but I have to admit that when I watch Benjamin on the stairs my heart just about stops (he's so wibbly-wobbly!), and when I watch Miriam I can't help but laugh out loud (I mean, what is she doing?).

Here are a couple more pictures of my sweet baby boy having fun: 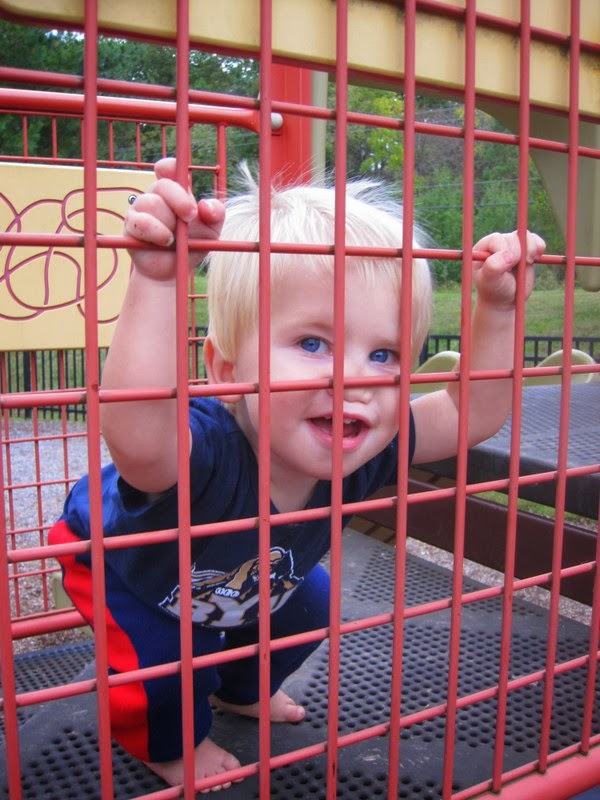 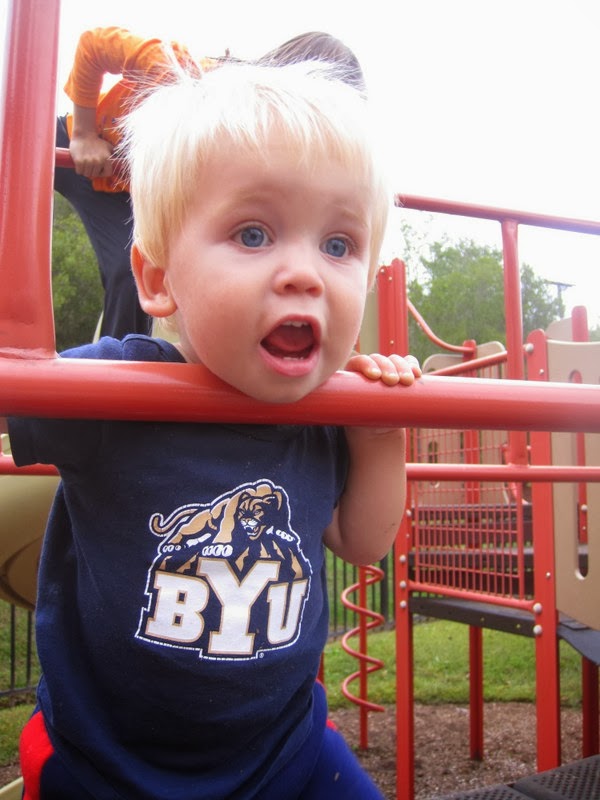 And here's a still of Rachel doing a backflip: 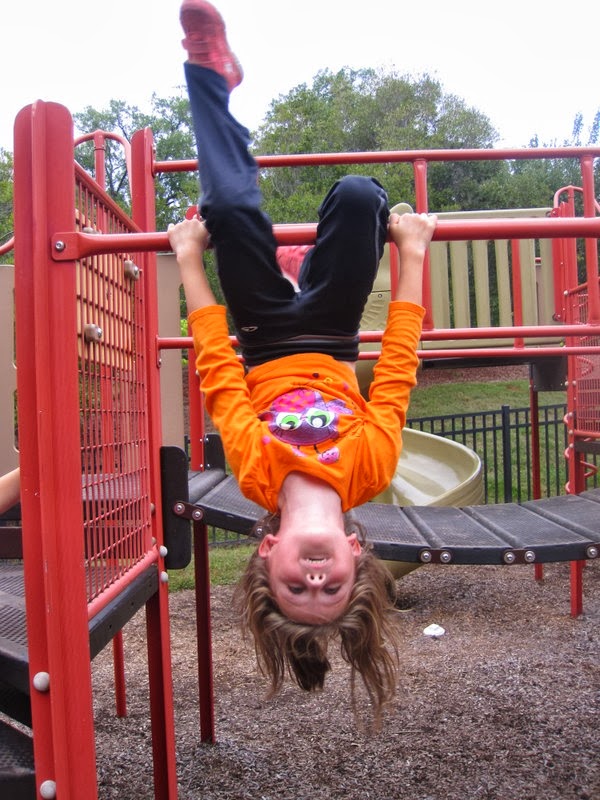 This morning Andrew found a Chinese Mantis (I'm pretty sure that's what it is because it is gigantic) on his scooter so he caught it in the butterfly habitat (ie. cage) we have so that we could observe it over the course of the day. Miriam took one look at it and said, "Whoa! Dad caught an anteater?!" It was just that impressive. 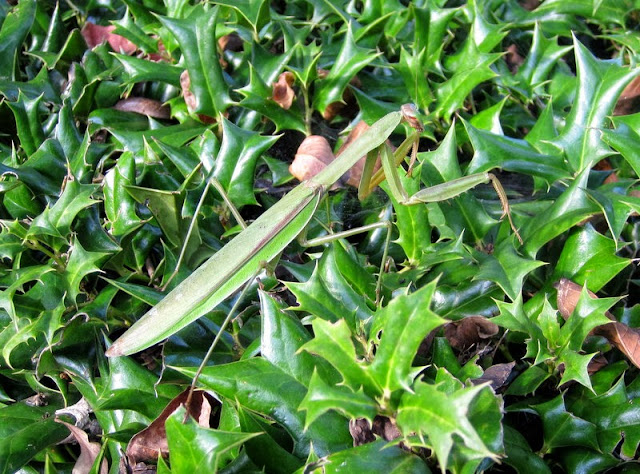 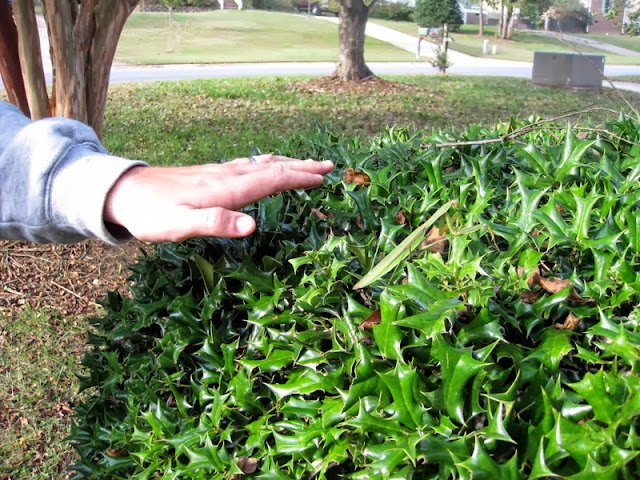 You can see Rachel's a little squeamish about it, while her friend Cal thinks it's totally awesome. 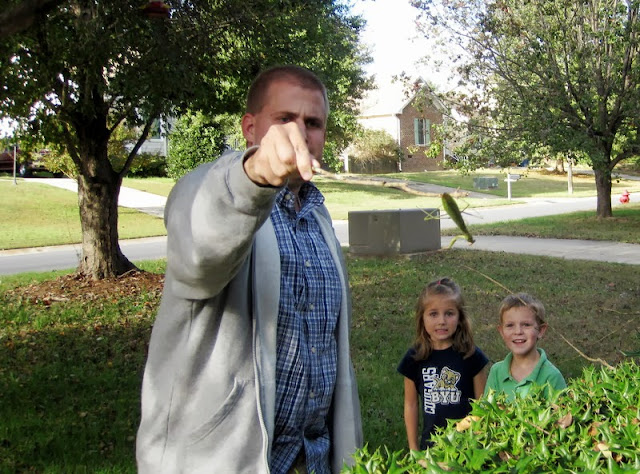 After letting her go this afternoon and watching her slowly make her way to the holly bush (her choice), Rachel and Cal spent about an hour trying to catch her again. She's rather intimidating, though, from what I've been reading, harmless to humans. How harmless can a creature that can consume a hummingbird be?!

So, we have a Chinese Mantis sitting on our back deck. It's too bad I didn't catch the stink beetle I saw the other day—it was the size of a frog, I kid you not—it would have made great prey for our mantis (though I don't even know if they eat stink bugs; probably they don't, which is a pity because they're everywhere right now (this just in: they do, they definitely do (our mantis will be feasting in the morning—and hopefully she left an egg sac somewhere in our yard so her offspring can gorge themselves on stink bugs because she should be near the end of her life now))).

Our neighbour saw us trying to catch us and was asking us questions about it.

"What are you going to do with it if you catch it?" he asked Rachel.

"Oh, probably just keep it until it dies," she said truthfully. We do have a knack for killing things (plants, goldfish, etc.) unintentionally. But, really, mantises are a seasonal insect. They live from spring through fall, so it wouldn't be our fault if she died. For now we're taking the advice of our neighbour and the mantis has become our outside pet (though she might be released tomorrow). 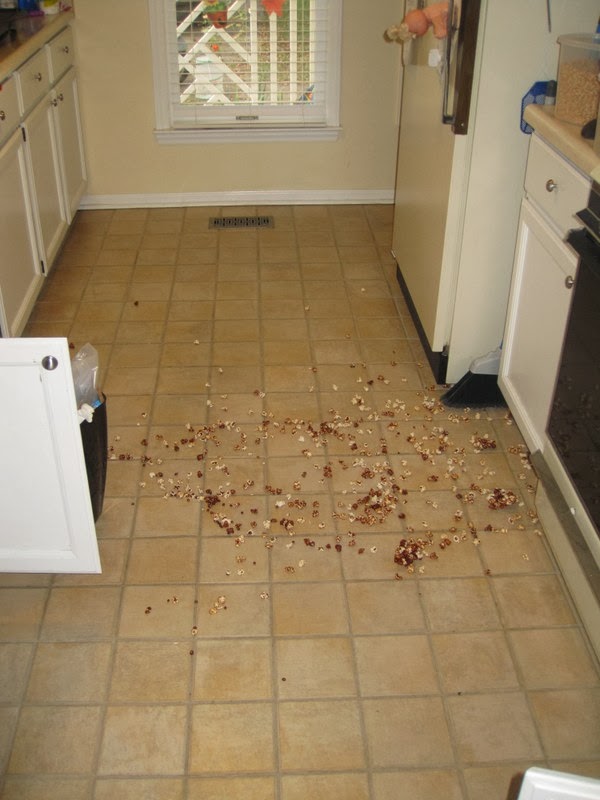 I will give you three guesses as to who made that mess.

No, it wasn't Andrew.

It wasn't Rachel, either.

I thought I'd whip up a batch of kettle-corn for an afternoon snack all cool-mom style but it was a complete disaster from start to finish. I melted the spoon I was stirring the oil and sugar with. I singed whatever kernels managed to pop (and truthfully, not many of them even did). I served the kids apple slices instead. And then when I went to clean up my mess it turned into more of a disaster.

I got an empty grocery bag out and put it over the pot, intending to just tip the pot upside down and allow the contents to fall into the grocery bag.

"Goodbye, nasty popcorn," I said authoritatively before tipping the pot.

I don't even know what happened to my well-thought-out plan but I think I got about three pieces of popcorn in the bag and the rest? Well, the rest landed on the floor, which, naturally, I'd just mopped earlier in the afternoon.

Andrew had come home and was starting dinner (bless that man) so he was in the kitchen while I was cleaning up my cooking disaster and he watched the whole thing. We laughed so long and so hard that tears were streaming down our cheeks and we were gasping for breath. And then Andrew helped me sweep it up (bless that man).

Lastly, Miriam is re-allowed journal time in her bed (after a two-month hiatus because she carved her named into her bed with her pencil (she now frequently vows to "not even carve anything" and tonight tacked on, "it'll be a surprise for you!" Because I should be surprised when my children refrain from carving their name into the furniture). This is what she wrote this evening: 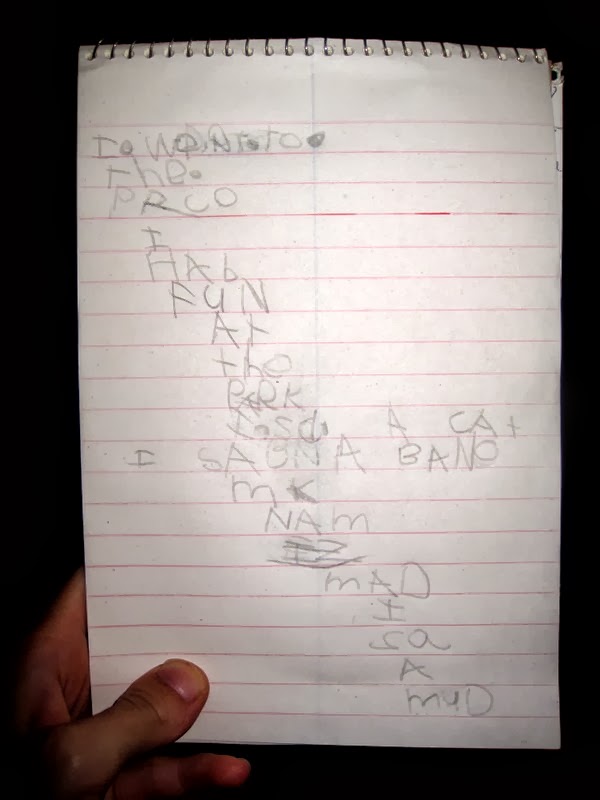 We're doing How to Teach Your Child to Read in 100 Easy Lessons and so that's why she is drawing those big dots between the words (I think—because her book did that for a while). It says:

The rough translation of this is: I went to the park. I had fun at the park. I saw a cat. I saw a bunny. My name is mud. I saw a mud.

I don't know why she felt like writing "my name is mud." That's not really something I say to my kids, but Rachel's been reading Junie B. Jones lately and that sounds like something that might've come up in Junie B. Whatever the case, it's hilarious.

She had trouble with the word saw. She actually came out of her room to ask me about that word because it was so confusing for her. It sounded, to her, that the vowel should be an o but from memory she knew the word didn't have an o in it.