Can you bake a pie?

Give me a week and I might just be able to—bake a pie, that is—because wasn't it a week ago that I finally cooked up our Halloween pumpkins and turned them into goo? Yes, it was.

On Monday I finally got around to making pie crust (using this recipe: grating frozen butter—genius). The kids "helped," of course, which might explain why this process took a week. 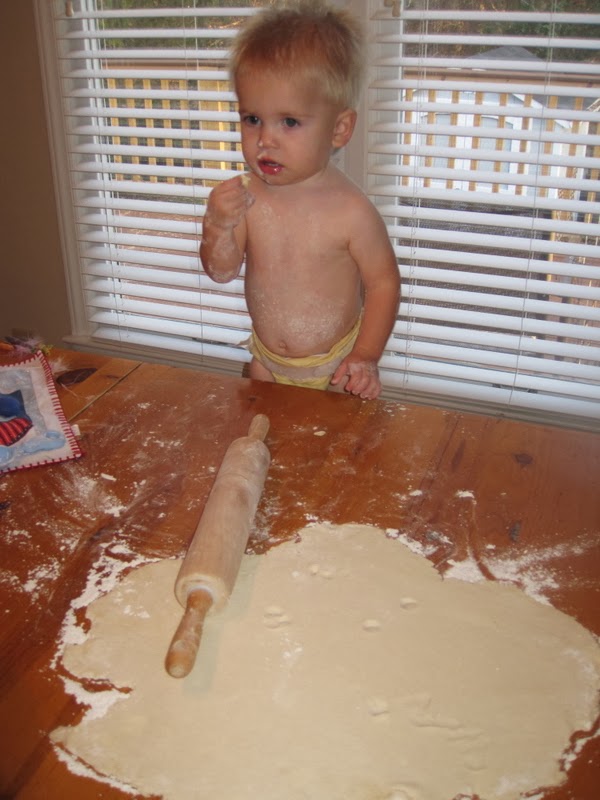 We had enough dough to make more than one pie as well as plenty of extra filling (we used this recipe) so we decided to make tarts. Rachel had read the word tart in one of the American Girl Doll Felicity books, but she learned it as it applies to humans, specifically females, though I'm sure the book wasn't talking about prostitution as much as it was talking about...being "a girl who likes to get all pretty and talk to boys and stuff." That's an actual quote (from Rachel, of course).

Perhaps the author had better choose her words more wisely when dealing with the 1700s, especially since tart, referring to women, wasn't a thing until the late 1800s. I'm just saying...

Personally, I was expecting Rachel to tell me about pie when she brought up the word tart, but whatever, Valerie Tripp. I can find reasons for making pie all on my own.

Here's Miriam pressing the dough into our pie tins, such as they are: 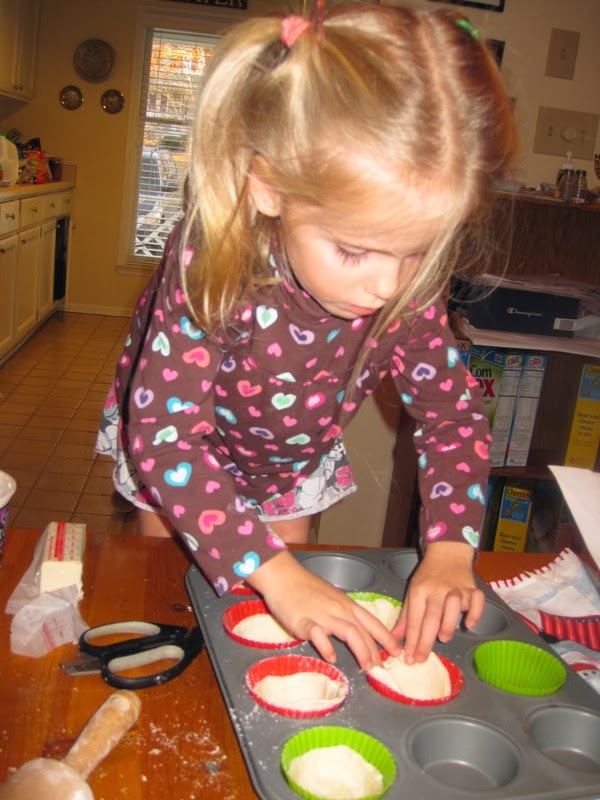 Have I ever mentioned how much I love these things? They're silicon baking cups for cupcakes...or tarts (apparently)...that "fell into the cart" when Andrew was out doing some post-Christmas grocery shopping with his mom. They bought a dozen. I like them so much I bought a dozen more because it's so nice to always have baking cups on hand. That's something I always forget to buy.

Now I can make banana muffins whenever I want (we make banana muffins quite a lot because we're always letting our bananas get overripe). I don't have to wonder if I have baking cups and I don't even have to bother spraying all the cups of the muffin tin.

We made the dough, put it in the fridge and...left it there overnight because I just couldn't mix up the filling, too. Not with Benjamin on my hands. Why, oh, why did he ever decide to give up napping? Why?!

I seem to be suffering from a lot of tangential thoughts today.

We made up the filling yesterday and for dessert we had some delicious pumpkin tarts. We also discussed the word tart because it's very important to understand that many, many words carry more than one meaning. For example, if you wanted to give someone a sock on their nose, they might say they definitely don't want a sock on their nose (because, as we all know (including me (now)), a sock can mean a punch). However, there's a slight chance that person would be all for getting a sock on their nose, if they think it's an actual sock. For example, if their nose is unusually cold...or if they happen to be Benjamin (who thinks DST is the funniest thing ever). 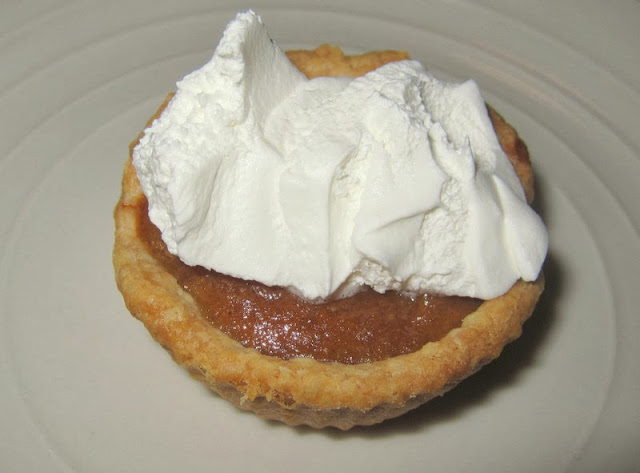 Rachel didn't know that I could even bake a pie and she was like, "Whoa." 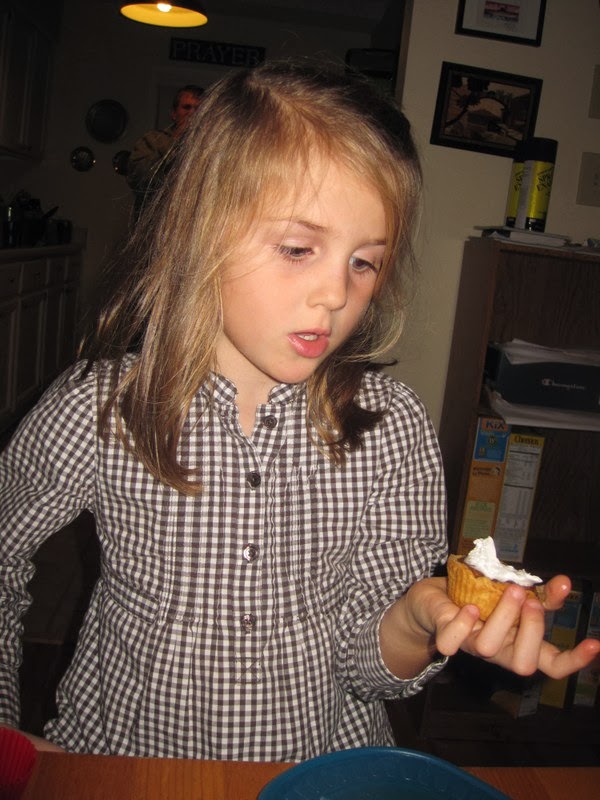 I'm just kidding. I actually snapped that picture in the middle of her talking about something. She just won't stay still for a picture, that one.

This one, however, will: 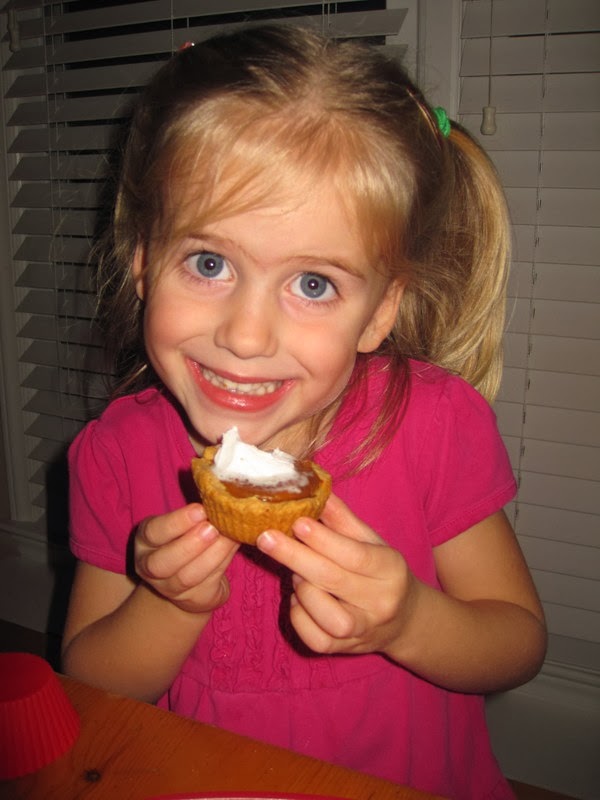 Miriam was quite proud of her handy work.

Tonight we had (some of) the pie for dessert. The recipe called for 1.5 cans of evaporated milk so we actually whipped the last half of the can up to use for topping since we'd run out of whipped cream the night before. It worked...okay-ish. I recommend actual whipped cream though. It really wasn't great. It wasn't terrible, but it wasn't great.

Benjamin is a little pie monster. Not only did he keep chanting "Me! Me! Me! More! More! More!" throughout dessert, he actually kissed his plate. 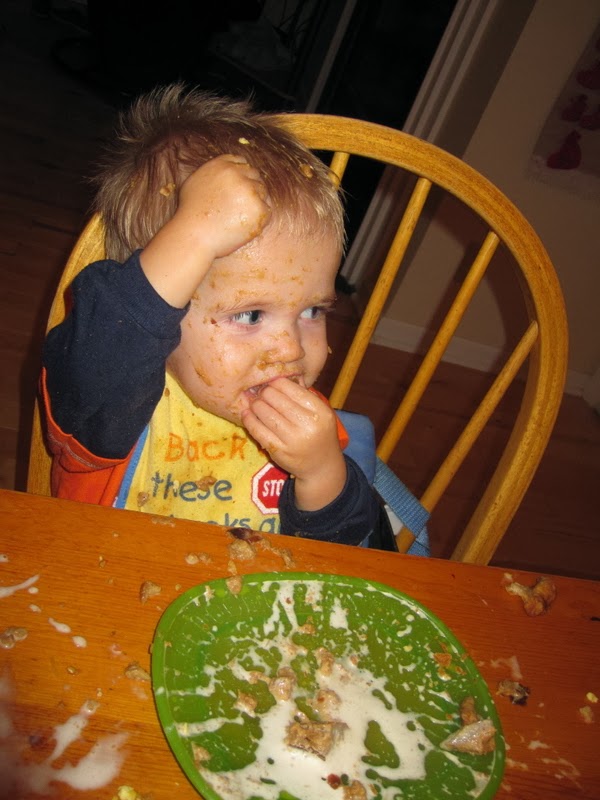