A big catch up

I feel like the blog has been so neglected! I got sick (again) and have been very busy trying to get better while also tending to Benjamin and Zoë, who have also been sick. I don't know what happened. I was fine on Sunday. I even taught Rachel's primary class because her teacher was out sick.

We had a lovely lesson on The Golden Rule. I invented a character to use in hypothetical situations. His name is Oliben. He's a somewhat annoying three-year-old brother.

There are only two children in Rachel's class, you see? Our ward has a phenomenally large junior primary but, due to the peripatetic nature multitude of the student families that provide the majority of the children in the ward, the senior primary numbers dwindle. It's kind of an amazing process to watch. Rachel had a handful of wonderful girls in her class when we moved here. Now there are two; it's just Rachel and Callin. Miriam went into Sunbeams with fifteen other three-year-olds. Now there are only ten kids her age. I'm sure in a couple of years there will only be a handful. And then...who knows because we'll likely be one of the families leaving.

Anyway, it's just Rachel and Callin.

Callin's mom and I have synchronized childbirth schedules.

It's almost eerie, really, but there you have it. Rachel and Callin have a lot in common. Not only do the have the exact same number of siblings all pretty much the exact same age, they also like building with LEGO and keeping their precious creations safe from the prying hands of their slightly obnoxious little brothers.

To simplify (and also to "anonymize) scenarios, I created Oliben. I seemed the best name.

Oliben worked. And Rachel and Callin thought it was hilarious.


Anyway, so I was fine on Sunday. And on Monday I was fine, too. We went to the school for literacy night and enjoyed some storytelling (but skipped out on hot chocolate at the end (except Rachel who ran to the cafeteria at the end with her friends) because they were trying to serve every kid and their parents from two crock pots with ladles; they were opening packets (packets!!) of Swiss Miss and emptying them into the crock pots of hot water, stirring wildly to keep up with the chocolate-demanding mob. Hello! They sell cans of hot chocolate mix.... We went home and made our own hot chocolate because we are The Meanest Parents in the World (officially, as of Monday night (our kids told us so, so it's pretty official))).

Here are the kids at the Christmas Train, though: 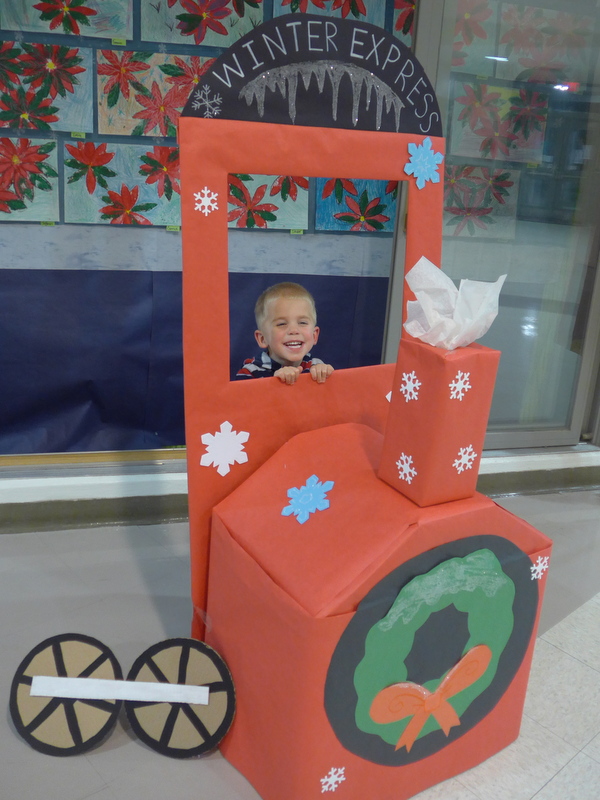 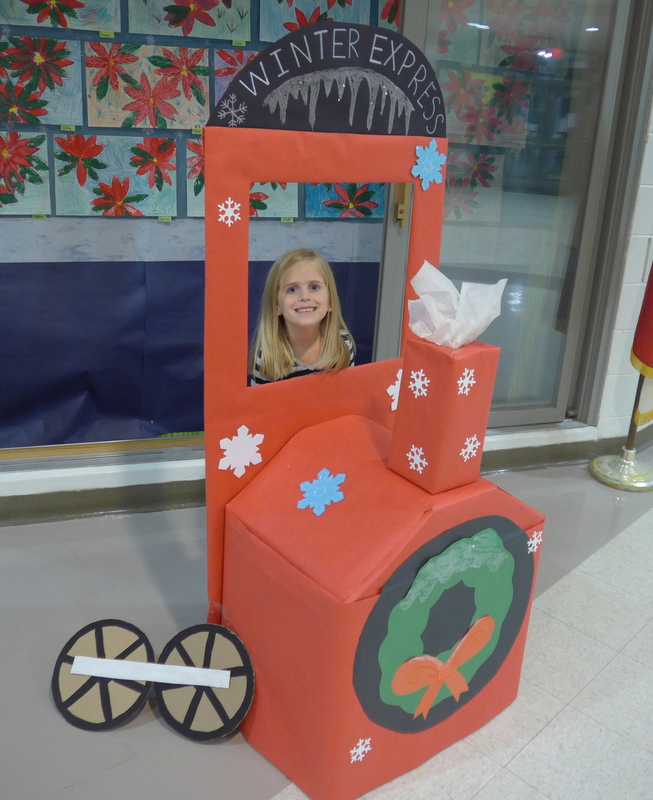 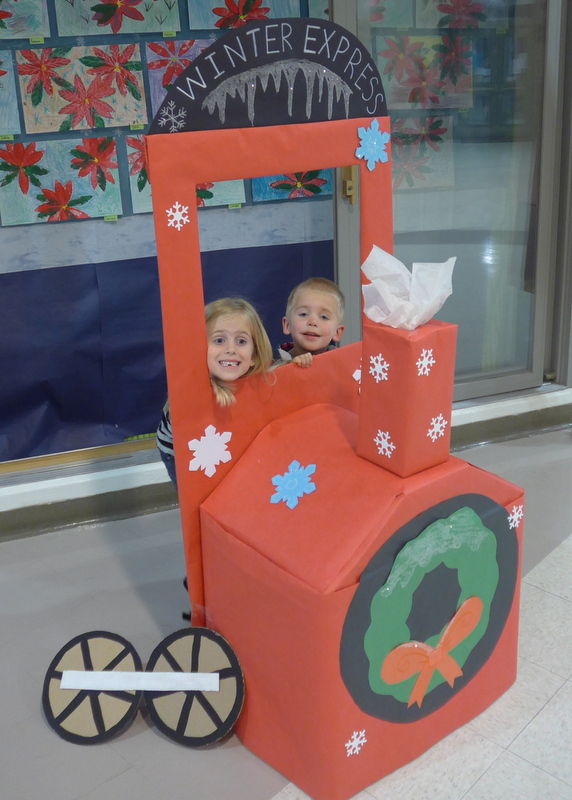 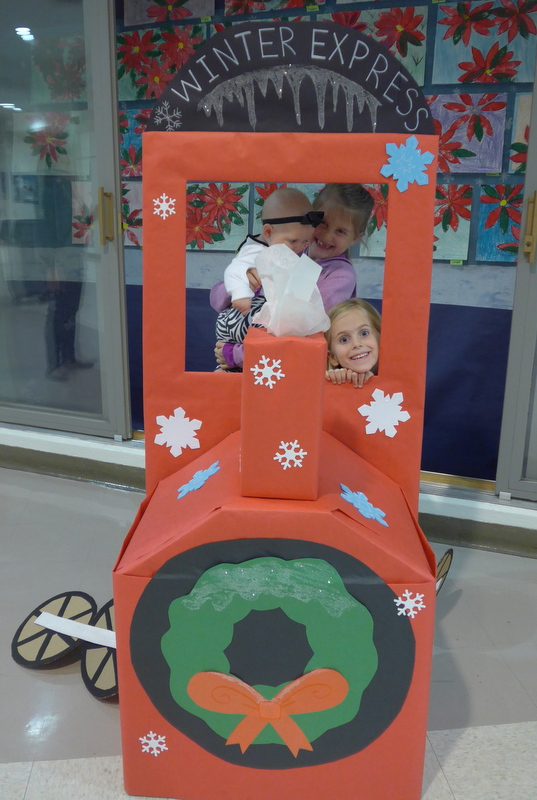 On Tuesday I went to the dentist, which was a little outrageously expensive but I had a feeling I had a cavity (which was a true feeling) and I didn't want it to get worse, so to the dentist I went. And now I have to get that cavity filled and that's going to be a little pricey, too. But I was sick before I looked at the bill.

Yesterday was pretty miserable. We were supposed to go carolling with the youth in the ward. Instead I made cookies and sent Rachel and Andrew alone. The rest of us were too sick to go. Even if I had wanted to share germs with everyone I wouldn't have been able to sing a note. My voice was ghastly! And I was so exhausted.

Zoë had stayed up until around eleven. And then Benjamin woke up crying at midnight, which woke Zoë up. And then after I got Benjamin to bed Zoë stayed up until 3:30 in the morning. And then nursed twice before 7:00 when everyone decided it was time to get up. Because it was. Oh, but it felt so early to me!

We had the laziest, TV-watchingest day. Soup. Water. Redoxon. Repeat.

I was feeling much better when I woke up this morning; it's amazing what rest and fluids can do for a person.

The (little) kids and I went to Rachel's class to read stories at lunch and then we hit up the park in the afternoon (because it's still like 70°F outside (or around 21°C)). We left mostly because Zoë had a huge blowout (from a cloth diaper! (that rarely happens)) and I didn't have a spare pair of pants for her so she wore her pullover home. The good news was the the hood doubled as a chew toy. 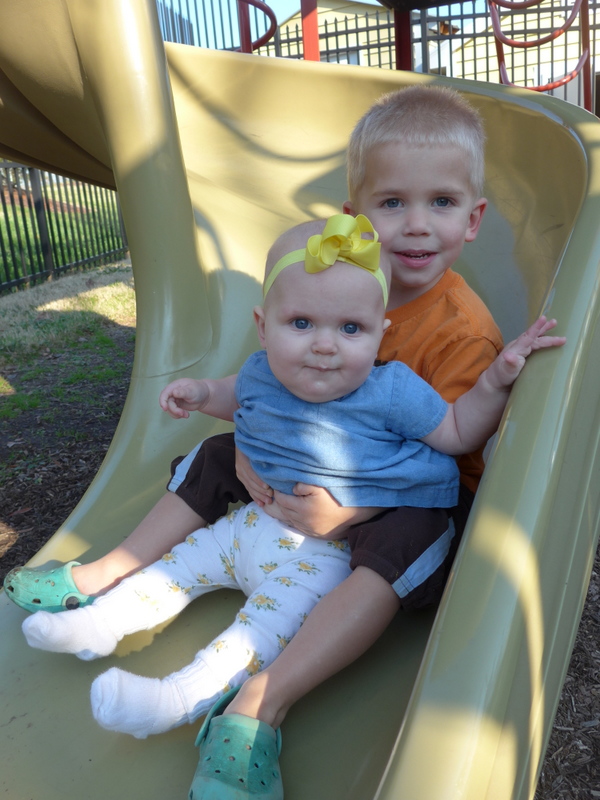 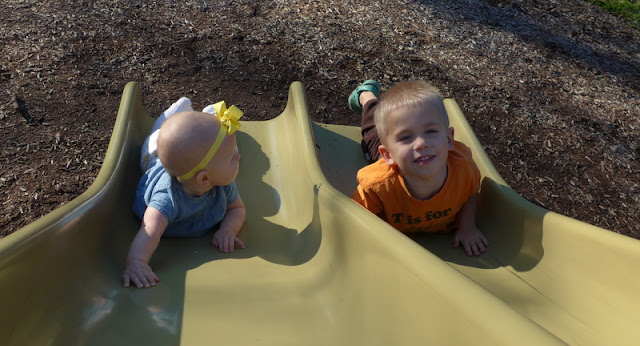 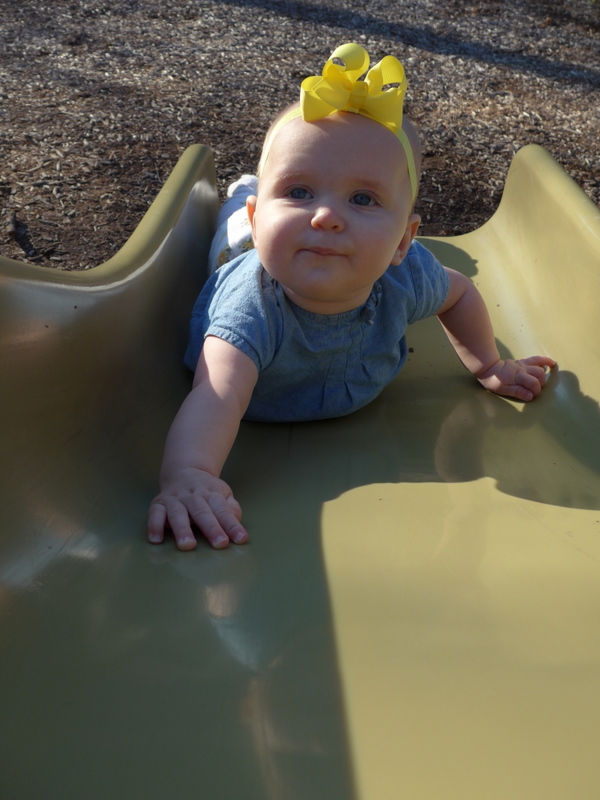 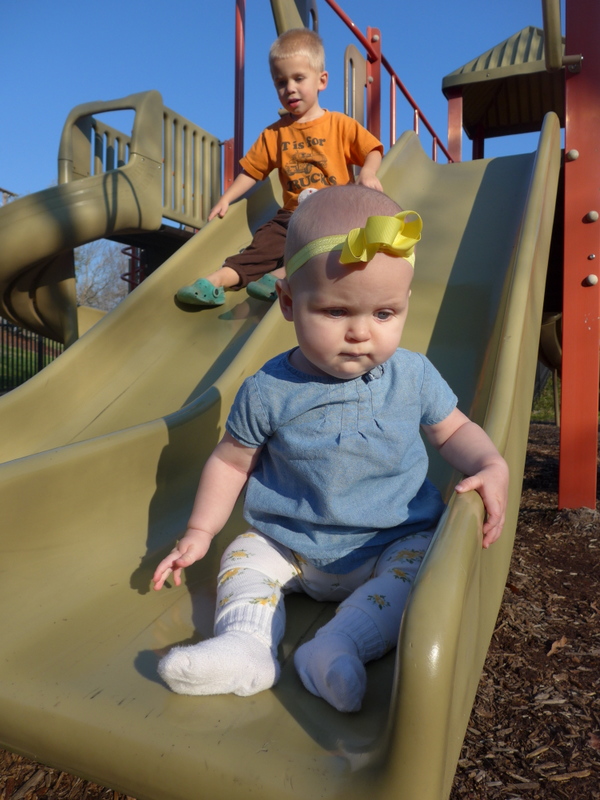 Her pullover almost makes a cute pair of pants: 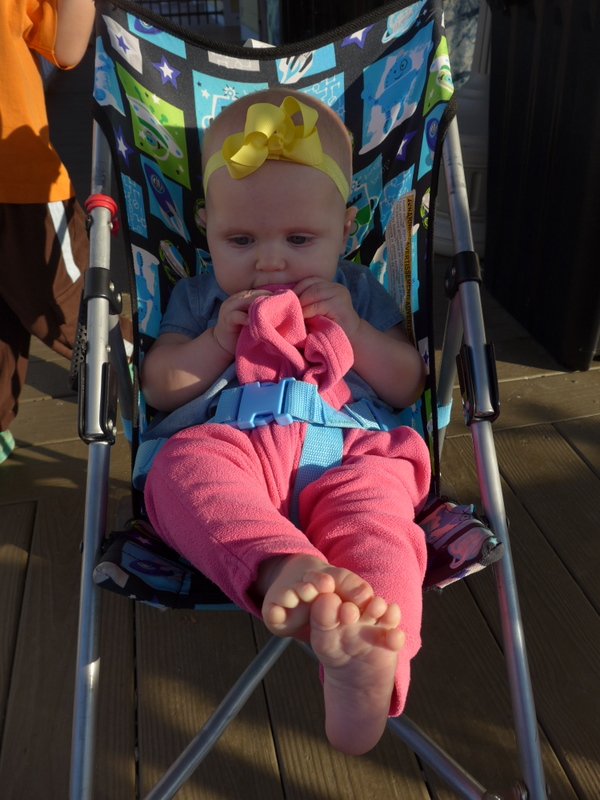 And here's the picture that we took together. Benjamin demanded that I put the camera "right here" and set the time so that we can all have a picture "togezzy." 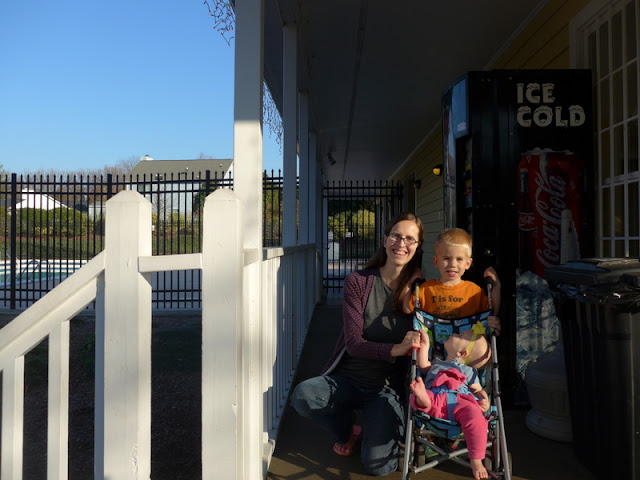 Here's one more shot of the pullover pants: 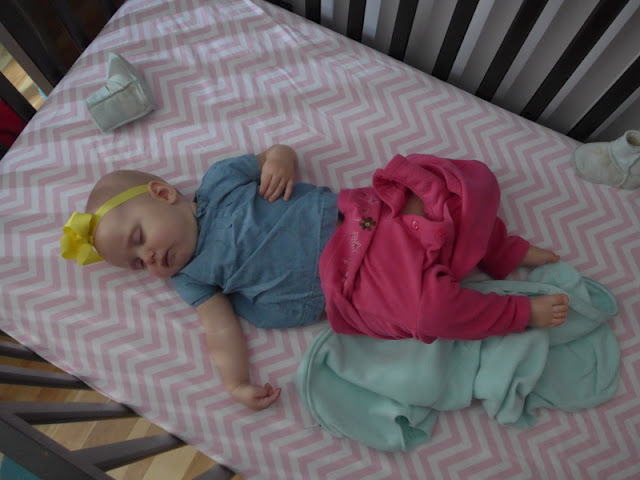 This nap didn't last long because the girls came home from school, threw their stuff in, and holleringly (not a word; but there should be a word like this because "loudly" isn't cutting it) asked for permission to play with the neighbours. So. That was the end of nap time.

But at least I was around.

Yesterday I decided to take a shower in the afternoon while Zoë was napping, thinking I would have plenty of time to shower and then also squeeze in a nap. Benjamin was in a nearly vegetative state from being sick and consuming so much television so he wasn't really a threat. So, I hopped in the shower, but then I started hearing banging noises in the living room. *BANG*BANG*BANG*

"I'll just finish really quick before I check on Benjamin," I told myself.

So I hurried and then I went out to the living room, dripping wet, in my towel.

*BANG*BANG*BANG* I heard, but there was Benjamin completely zoned out on the couch.

Slightly disoriented, and without my glasses, I looked around for the source of the noise.

I peeked through the peephole and saw two little people banging on my door. I couldn't tell who they were, just that they were people, and they were little (I didn't have my glasses on, remember?).

I unlocked the door and opened it a crack and who was standing on my front porch? A rather disgruntled Rachel and Miriam.

Quite confused, I opened the door to let them in, asking how their day had been, and wondering aloud about my confusion. It was barely 2:30. I wasn't expecting them for another couple of hours.

"It's an early release day," they informed me. Like, duh.

There are 24 Wednesdays between school starting in June and December. 13 of them are either holidays or early release days. Who needs Wednesdays? Apparently the second half of the school year because there are 23 Wednesdays between January and then and only 7 of them are holidays or early release days, which is a real bummer because I always feel like I need more time off at the end of the school year when the weather is nice and...yeah. Oh, well.

One of these days I'll get all caught up with everything I have to do, right?
Posted by Nancy at 11:49 PM