At seven months, Zoë is much more interested in moving than in staying still. Unfortunately, she hasn't quite figured out how to crawl yet and is stuck rolling and scooting and it's driving her bonkers. We catch her planking quite a bit and have spotted her rocking back and forth on her hands and knees a couple of times. So don't worry, Zoë! Crawling is right around the corner! I promise. 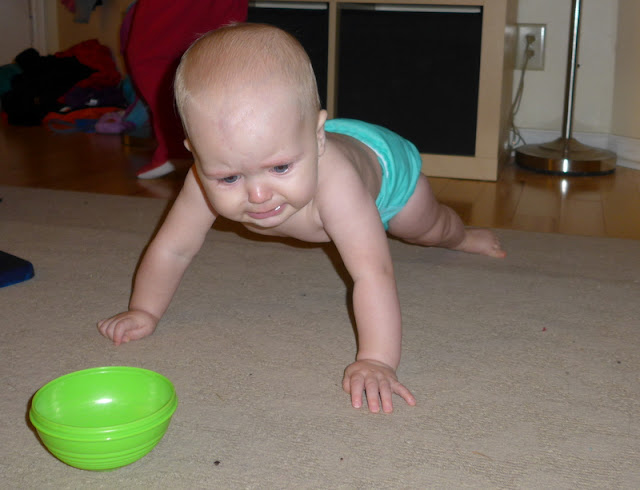 Unless...walking comes first. She's rather interested in that mode of locomotion as well.

On Christmas morning we plopped her in a big box (from our new Instant Pot (my friend Lydia raved about it on Black Friday, including a link to an incredible deal, and since Andrew wanted a bigger rice cooker anyway we figured it could be our Christmas gift to ourselves (and so far I've made pot roast and steamed potatoes and carrots; Andrew has made rice))). She wasn't too thrilled about being stuck in a box. 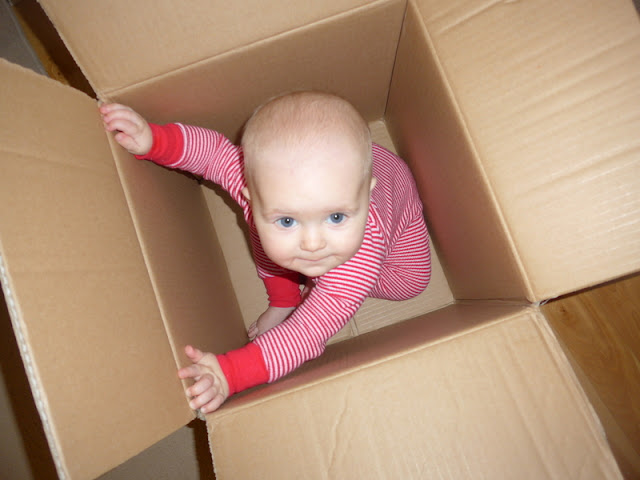 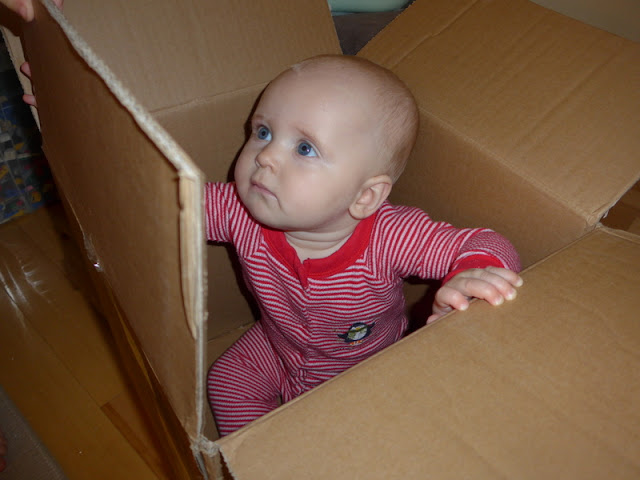 But then Benjamin offered her his lightsaber and things got a little more interesting... 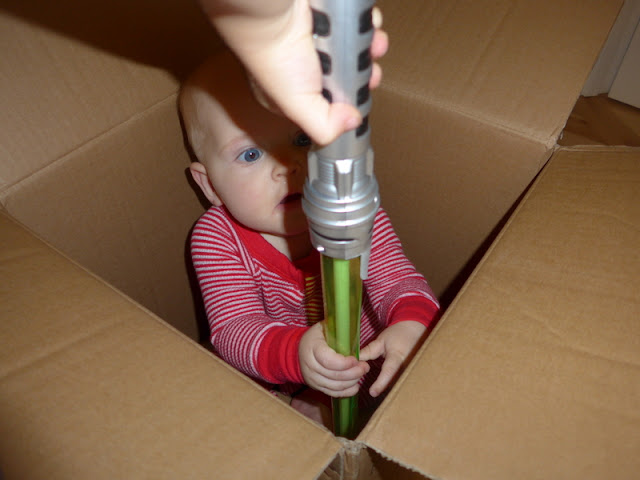 But then he started taking the lightsaber away, and though she did her best to hold on it eventually slipped from her grip. He is, after all, her big brother. And that makes him quite a bit bigger at this point in their lives. 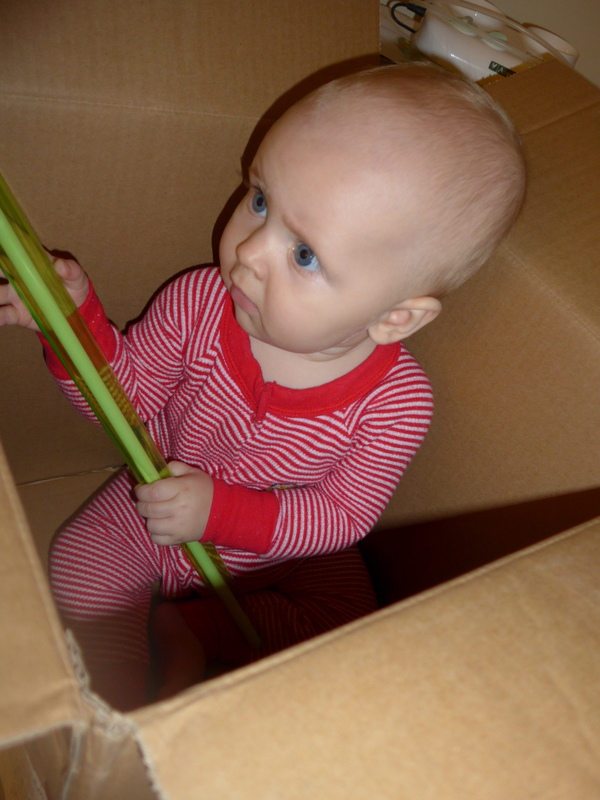 So she did what any seven-month-old would do in her position—she grabbed the rim of the box, hoisted herself up to standing, and demanded that he give the lightsaber back (leaving us all rather in shock). Here she is squawking at him. 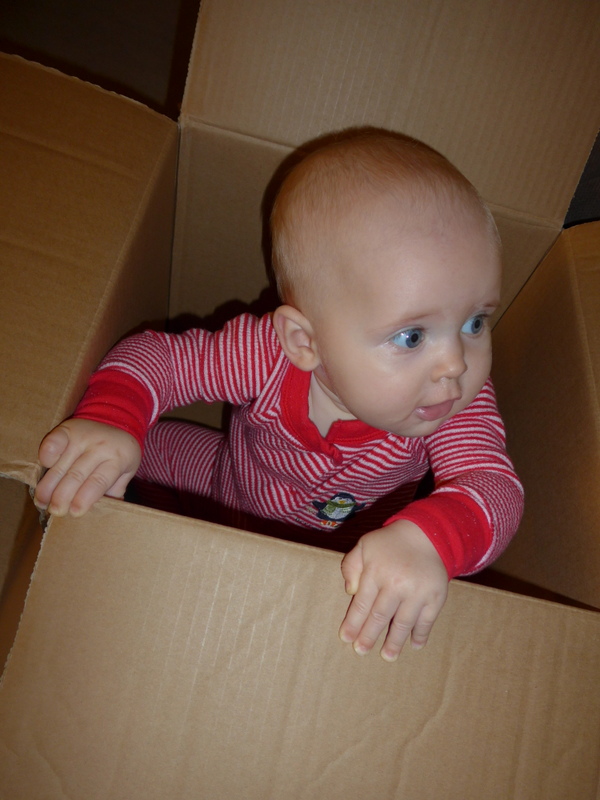 And here she is turning to look at everyone oohing and aahing over her new standing up skills: 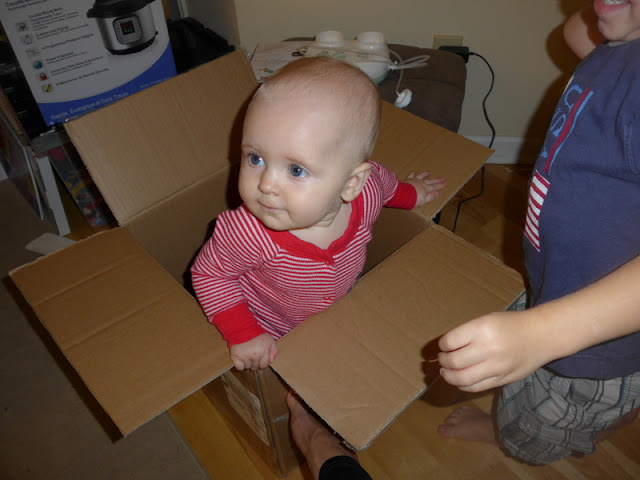 And here's Benjamin saying, "She'll never get my lightsaber. I am Master Yoda!" 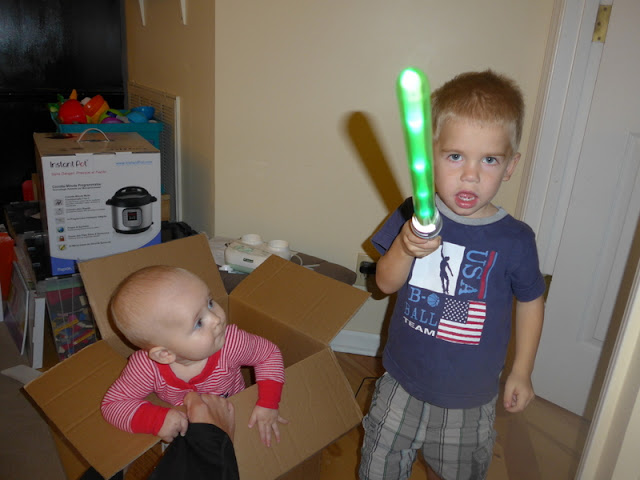 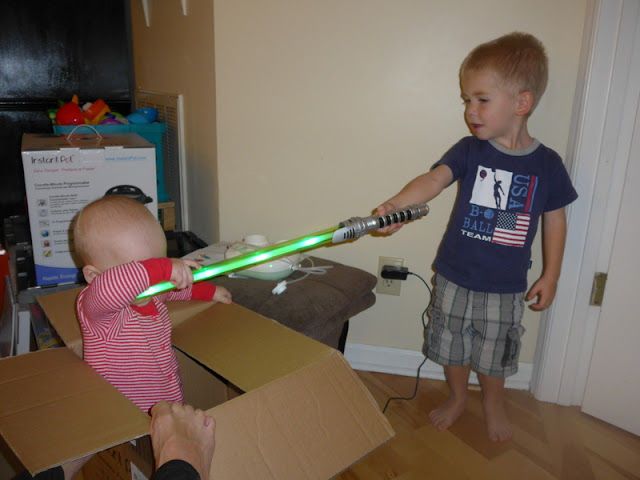 So, standing's rather new and exciting and it makes me nervous because she's more than a little topsy-turvy on her feet. To date she's managed to pull herself up in her crib (I need to lower that mattress; not that she sleeps in there or anything (she doesn't)), the couch, the chairs at Relief Society, and this box. If we're being honest, she's probably pulled herself up other places I'm not aware of.

We're going to have to be extra careful about LEGO. Oi.

She's coming around to the idea of solids, though she still prefers milk. Tonight she ate brown rice and Cheerios while we had dinner. She's also sampled peas, cheese, apples, pumpkin, peaches, avocado, carrot, banana, rice Chex, Goldfish (just the tails), popcorn (without the choky bits), and broccoli (she's just sucked on this; I haven't mashed it up for her). If we're being honest, she's probably eaten other things I'm not aware of. Oh, and paper.

Let's see...what else about Zoë?

She's working on cutting her first upper teeth. She's had the bottom two for months now.

She's not a great sleeper, but I know she'll sleep okay eventually. Maybe.

She's into babbling and the kids like to declare nonsense as her first words, which is ridiculous because (a) it's nonsense and (b) she's seven months old! But a couple of times I've walked into the room and she's said, "Mamamamamama!" while holding her arms out to me. It's possible it's completely coincidental but deep down inside I want that to be her first word, so I'll take it.

She loves to gurgle. It's the goofiest thing! She will sometimes stop nursing just to gurgle a big mouthful of milk and when she's upset she seems to purposefully collect a mouthful of saliva so that she makes gurgling cries. If she's not gurgling while crying she'll make sure that she gets a good gurgle going on soon. You can almost see her trying. I think she likes the sound of it. It makes her sound like a baby Wookiee.

She loves to go outside.

She's a joy, even if she wants me to hold her 24/7. I get nothing accomplished ever but at least I get a lot of baby snuggles. And somehow time is still moving too fast.
Posted by Nancy at 11:17 PM