I'm sure we'll take more pictures of our late night festivities as well (then again, we might not), but here are some pictures of the day from before 9:30 (when we rang in the New Year with King Benjamin).

The first thing we did today was sleep in, big time. I woke up just before 10 am and everyone was still sleeping. It was eerie, but I'm not going to complain about it because I think we all needed a good wake-up-when-ready day.

Once we were all up and at 'em, Daddy took Benjamin grocery shopping while the girls and I took down the Christmas decorations. I had to take a picture of this branch: 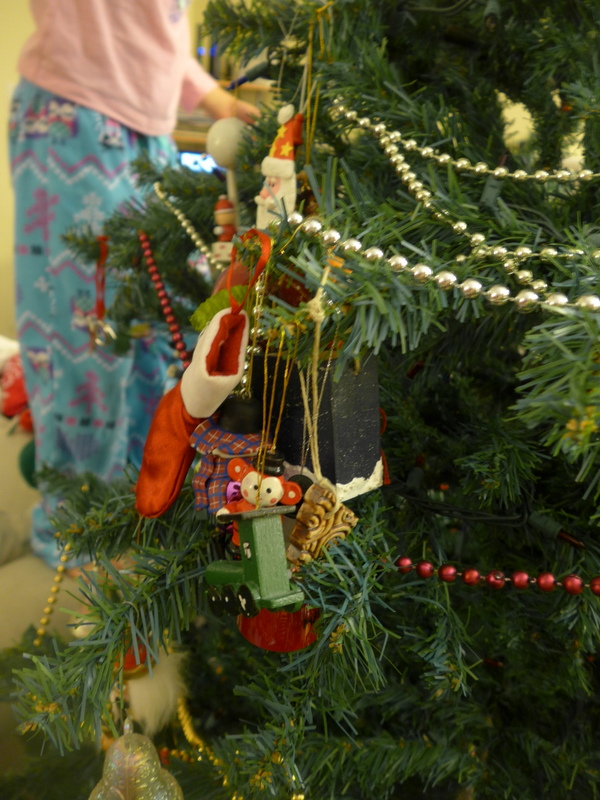 It's rather high on the tree, but it was Benjamin's favourite spot to hang ornaments. He'd stand on the arm of the couch in order to reach; it was all very precarious. (But apparently Rachel's into that sort of stuff, too, because that's her balancing on the arm of the other couch in the background of the picture). We're lucky he didn't ever lose his balance and send the whole tree toppling. It took me several minutes to untangle the multitude of ornaments amassed on this branch.

Zoë took a very Seussical nap in her crib. She won't lie down on her own (for long) unless she's super swaddled. Still. 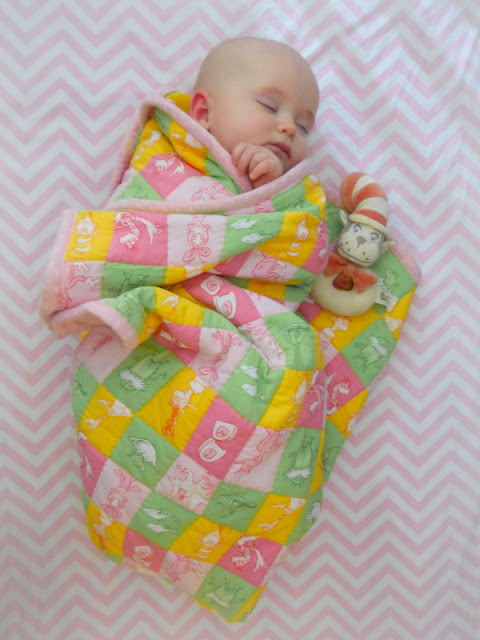 Later in the day, while I was baking banana muffins for tomorrow's Bishopric Breakfast, I asked Rachel to hold Zoë because she was being so fussy. She sat down with her in the rocking chair and rocked her right to sleep. Screaming wears you out, Zoë's learning. 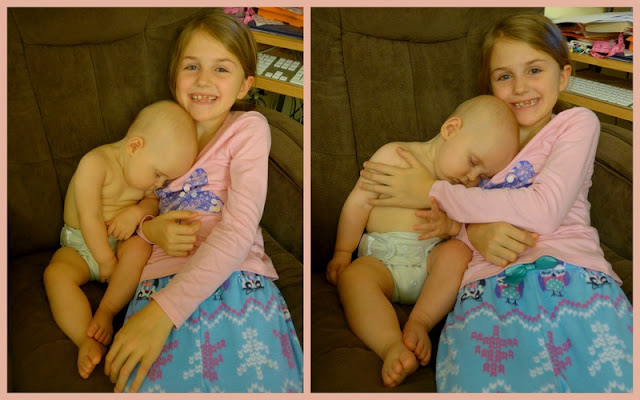 The poor baby's been so miserable lately with colds and teething, but her third tooth broke her gums this evening (and it looks like tooth #4 isn't too far behind) so hopefully she'll be a little less grumpy/clingy/needy in the near future.

We ate pizza from Little Caesar's for dinner while we watched The NeverEnding Story. We were hoping to have Costco pizza (because that tastes better) but they were completely out. Apparently we weren't the only family in town who thought pizza would be a good idea for dinner.

The kids enjoyed the movie, though some parts were a little creepy for them. I remember being creeped out by this movie when I was little, too. The luck dragon played a big part in many of my dreams—for years! Turns out, though, that it's a much better story for a younger audience.

After that we played Ticket to Ride and ate snacks. 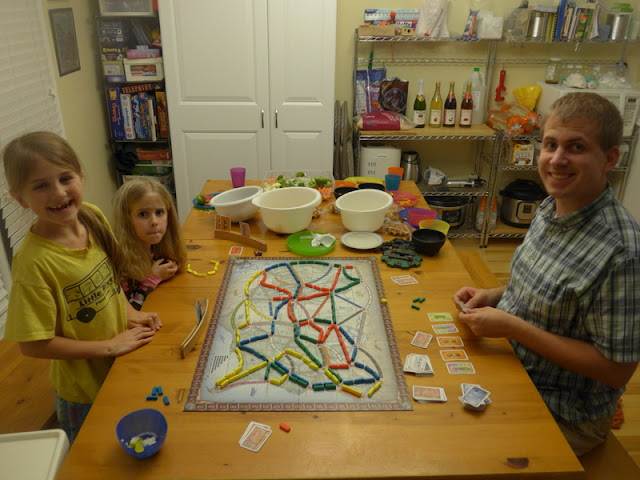 "I got snacks even Mommy would approve of," Andrew said when he and Benjamin got home from shopping. "A vegetable tray!"

And it was a mighty fine vegetable tray.

But I made some cake-mix brownies to offset it, which was weird.

Usually it's Daddy who says, "I bought cookies!" while I'm shoving carrots in the kids' mouth. This time it was Daddy bringing home the veggies while I was like, "Let them eat cake!"

This round of Ticket to Ride was so close! The only help we gave the girls was choosing their initial routes. After that they were on their own—and they did great! Miriam made it from LA to Miami to New York all on her own! Rachel finished all her routes, chose more, finished those, and got the longest train. Andrew and I were stuck in an epic battle along the northern border. At one point (when he bought a section of track right between two sections I'd recently purchased) I said, "Argh! Daddy! You just ruined my whole life!"

"You ruined mine!" he countered.

"Well, I don't have anything to ruin my life!" Miriam chirped sweetly.

But it turns out he didn't ruing my whole life because I still beat him (and I probably would have survived even if I hadn't...maybe). Look how close our scores were though! 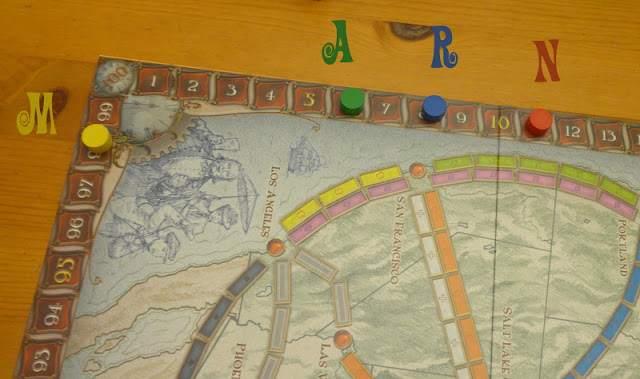 After the game we got on our pyjamas and decked ourselves out in glow-sticks for The Last Walk of the Year. On paper we didn't do very well with this goal, but I think it was only because I was so distracted by diabetes to bother recording family walks. We went on way more than I wrote down but usually I'd rush in from our family walk, hop on the exercise bike and ride for a few miles, then test my blood sugar. I was recording what I ate, when I ate, how long and when I exercised, and taking my blood sugar 3-4 times a day. I really wasn't bothering with recording when the whole family managed to get out the door together for a walk; bad record-keeping on my part. I'm pretty sure we got our hundred walks in even though I can't prove it. Our Last Walk of the Year was fun, though. We talked about Doctor Who and Star Trek, and waved our glow sticks, and I think Miriam and I sang Auld Lang Syne together at least a dozen times.

When we got home we turned on a little countdown show for Benjamin. First we watched the Puffin Rock countdown, which was cute, but a little too saccharine for our tastes. It was calm and gentle and very much hush-hush-it's-time-for-bed. 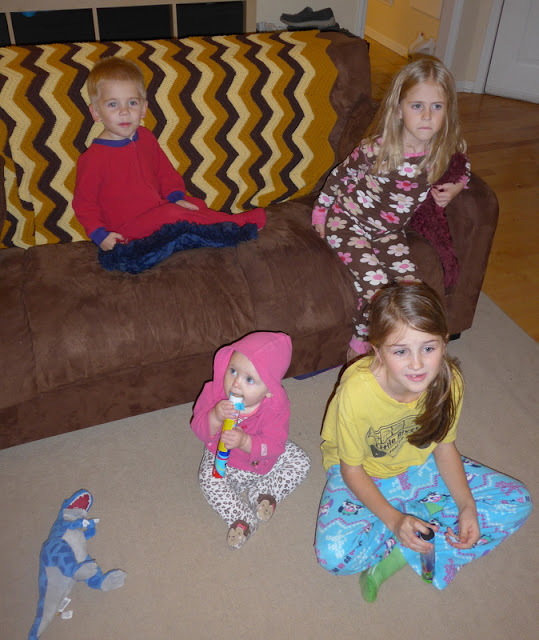 So then we turned on King Julian's Countdown (which we watched last year to ring in the New Year early) and had a dance party in the living room. It was a much more festive way to celebrate the New Year, though I will admit it got Benjamin quite riled up. But it's New Year's Eve! Being riled up is alright. 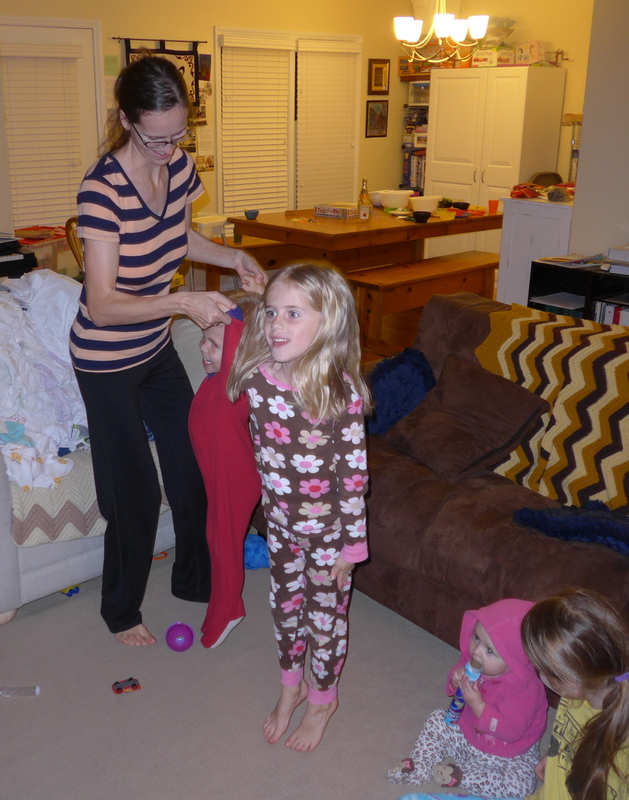 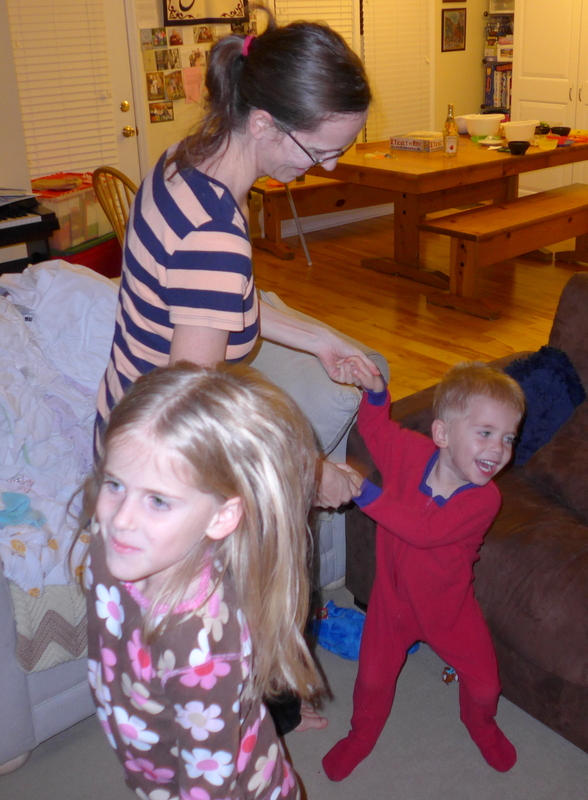 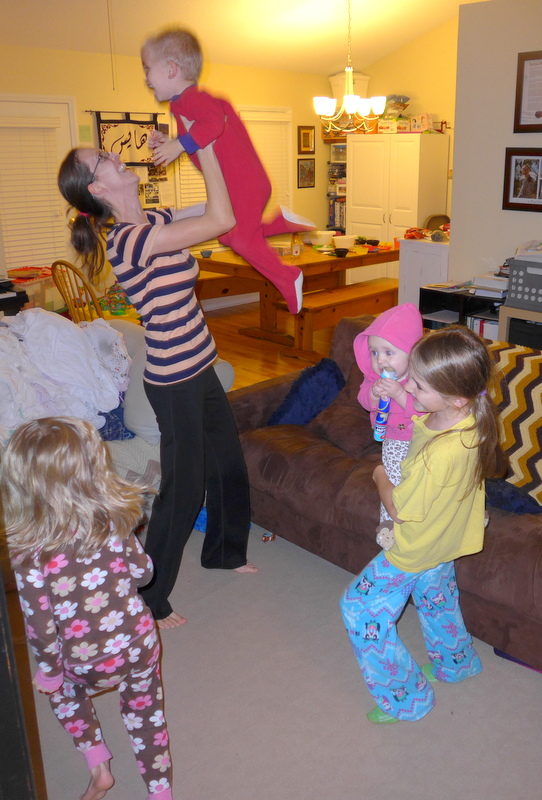 The kids got to drink some fizzy apple cider in their new snowmen mugs (from (Great-) Grandma Pat). Zoë is only pretending to drink; her cup is empty. 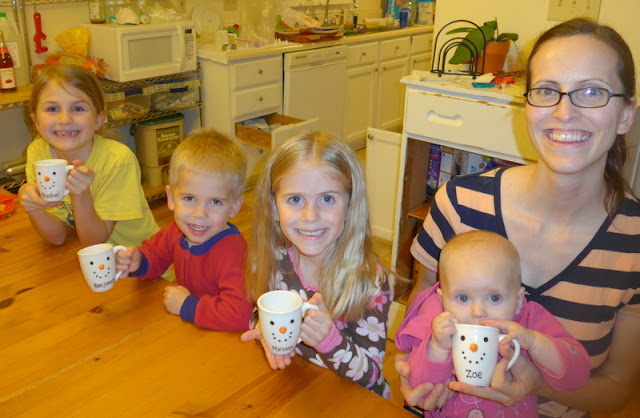 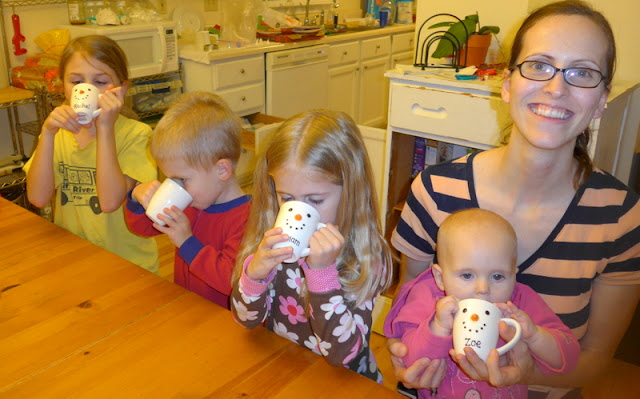 Andrew and I drank some to the New Year, as well: 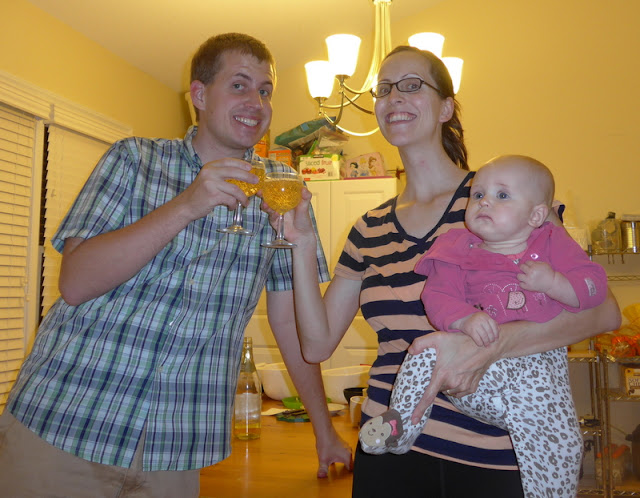 And the best thing about ringing in the New Year early and then staying up to ring in the actual New Year is two midnight kisses! Rachel took this picture and then said, "Hahaha! I got a picture of you kissing!" as if we should be embarrassed about that. 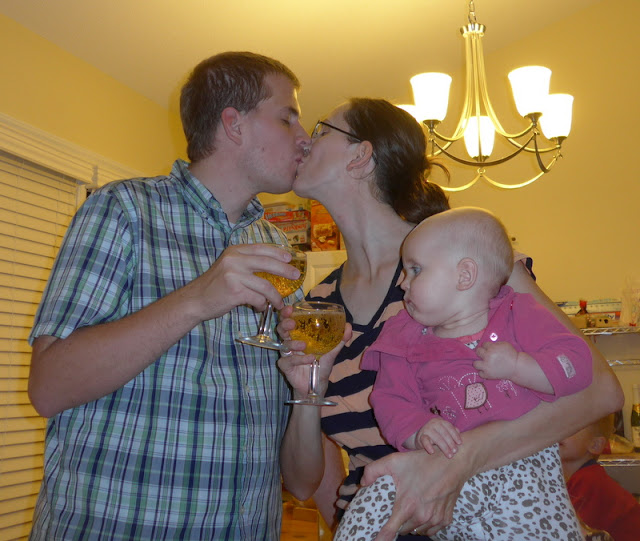 I love how intently Zoë's staring at my glass. If I told you that she stuck her hand in it a split second after this picture was taken, would you believe me? Because that definitely happened.