One of our favourite exhibits at the zoo, collectively, was the desert biome. I think part of the reason for that is because it seems so impossible to the children, especially lately. The hill leading to our backyard is so muddy that Benjamin was unintentionally using it as a slip'n'slide this afternoon (when it was, mercifully, sunny for a few hours). He slid down it so many times, always by accident.

I think he's only ever heard that term used metaphorically.


Anyway, the kids were rather excited about the desert biome because (a) it's so foreign and (b) it's their "roots"—it's where their grandparents live and where we were from before we were from here and (c) we could easily pretend we were in Mars when we were inside, which was most exciting at all.

We had fun trying to find all the animals in their homes. They were all very well camouflaged. Andrew was helping the kids sound out some of the trickier names for things and for the most part I think he did a pretty good job, but then we got to this sign and he said, "That's a Giant Vine-garoon. It defends itself by spraying acetic acid, or vine-gar..." His voice trailed off with confusion. 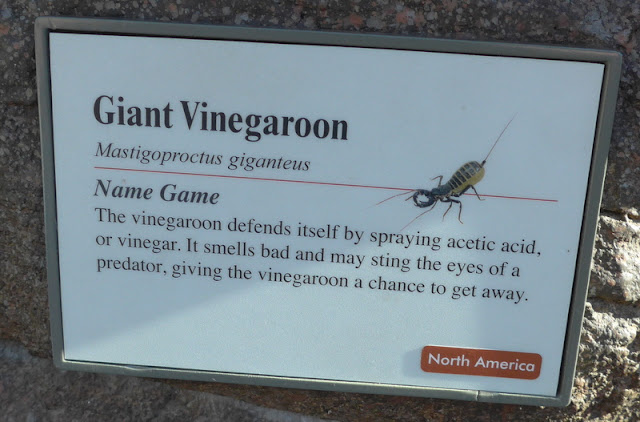 We had a good laugh about that (and then more laughter deeper in the exhibit after hearing a man confidently inform his children, "That's a gila monster," pronouncing it with an initial /g/ rather than an /h/).

At least Andrew was in good company!
Posted by Nancy at 11:49 PM