I was in charge of planning Rachel's class's "winter celebration"; we decorated melted snowman cookies and made snowmen out of paint sticks. I didn't think those two activities would take very long but it turns out that herding nearly thirty children through those two activities filled almost two hours. Next party celebration will be simpler. It was fun though! 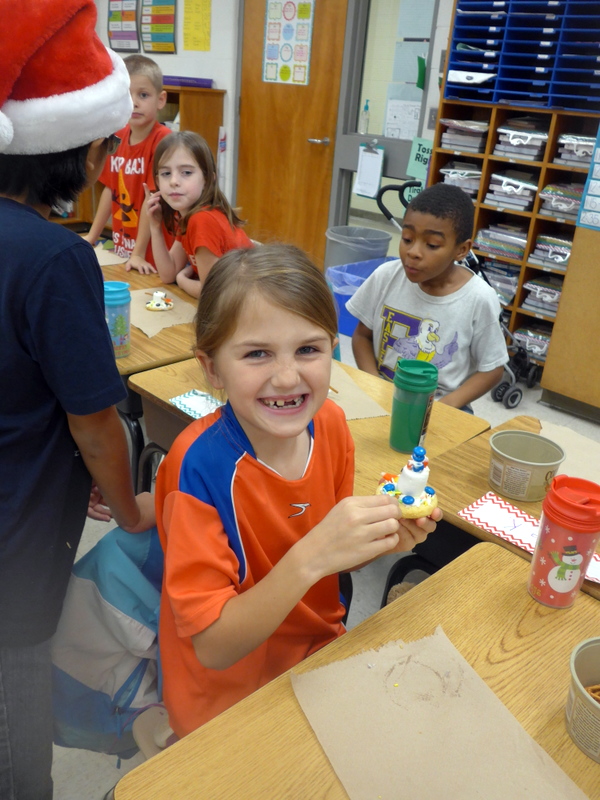 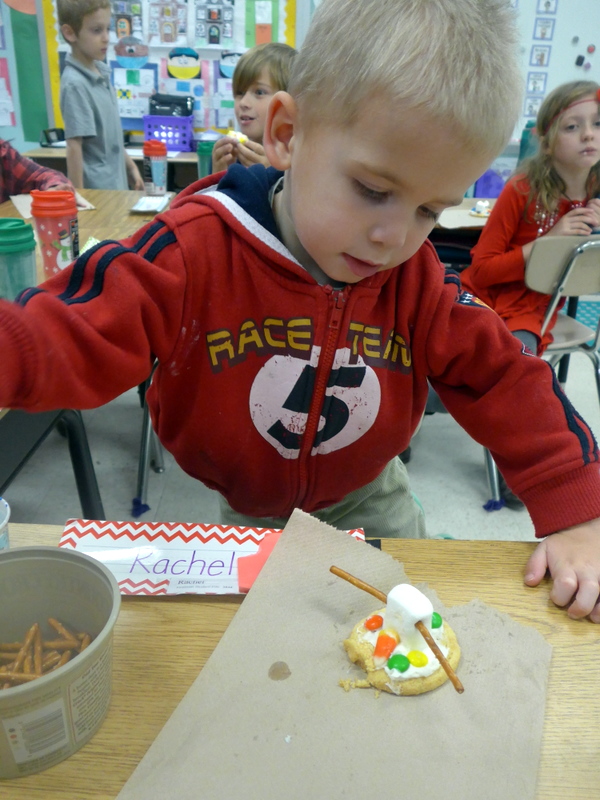 And here are a couple of the paint stick snowmen: 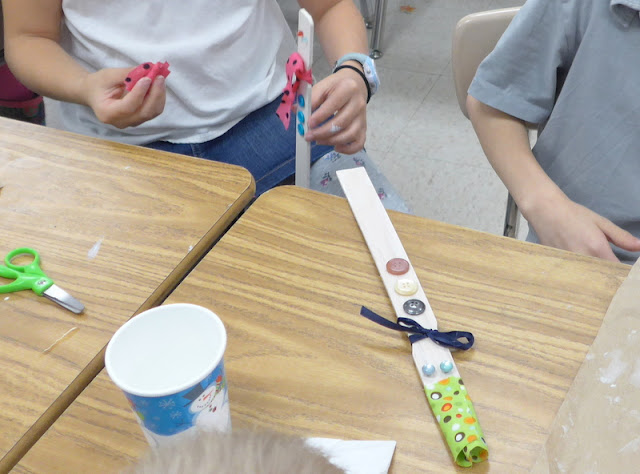 We also had "reindeer snacks" because we're supposed to do healthy snacks these days: popcorn, apples, grapes, and pretzel sticks. We were supposed to have carrots as well but those never showed up. I hope the kids had fun; Rachel told me it was fun. I'm not really a party person (and if I do plan a party I prefer it to be for like six children, not thirty) so these things kind of stress me out.

I did not have to plan Miriam's class party celebration, but we showed up anyway. She's been begging me to come into her classroom because I "always" went in when Rachel was in Mr. A's class. But when Rachel was in Mr. A's class, my preschooler was Miriam and she was well-behaved and fully potty trained and quiet and calm. Benjamin is a bit on the wild side and I really can't trust him to go potty every time he needs to (STILL) and he's loud and a bit obnoxious.

I love him, but...I'm also going to blame 3/4 of my white hairs on him. He's been stressing me out since the day he was born (and that is no exaggeration). When I sent Miriam to kindergarten I said, "Lucky you!" to her teacher. I can already see that when I send Benjamin to kindergarten I will instead be saying, "Best of luck to you." I know I have a few more years to get this boy ready, but will he ever be ready? That's the question. I should probably start going in more often just so he can get used to sitting in a classroom and listening to other adults but, uh, just convincing him to put clothes on in the morning about does me in for the day.

Anyway, here are my sweet little reindeer together: 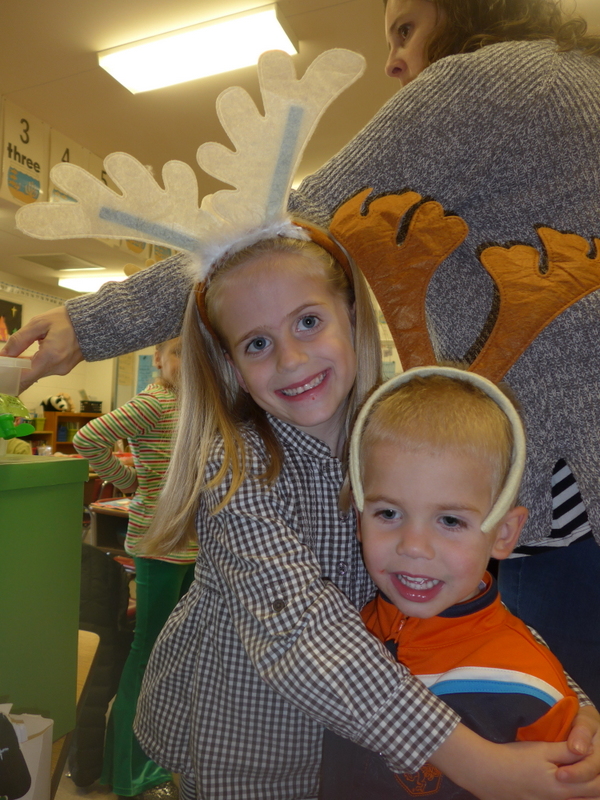 Miriam was so sweet, finding him a chair, and sharing her treats with him. She wanted us to stay the whole afternoon, which I wasn't sure I wanted to do because Zoë had fussed the entire morning (which meant I got little accomplished aside from baby snuggling, which although wonderful doesn't do a thing about laundry or dishes or vacuuming). But she was so terribly desperate that we stay so I told her that we'd try.

I might have felt a smidgen guilty as well because when she'd asked me why I came in more often for Rachel I shrugged and said, "Because I love her more, obviously" and Miriam didn't pick up on the sarcasm until I told her I was kidding (bad mom moment) and that, truthfully, I was just worn out from Benjamin and the baby.

Fortunately, I caught him before he'd gone too far and told him that if he dared poop in his pants he'd be in seriously so much trouble because he pooped his pants at the museum on Wednesday and I was not in the mood to deal with another public pooping incident because he's three-and-a-half and can't we just be finished with potty training already?! I don't even understand it because he'll do so great for so long and then all of a sudden he'll wet the bed three days in a row and poop his pants everywhere...and then he'll magically start staying dry at night again and never having any accidents and I'll comfortably proclaim that now he's finally potty trained and I don't have to stress about how close we are to a potty at any given moment but noooooooo because then he'll crawl under a slide and poop his pants just to show me that I can never relax, not ever and another grey hairs sprouts on the top of my head.

So I explained to Benjamin, although he didn't poop his pants, he was in trouble for not telling me that he had to go. Because hiding instead of asking for help finding the bathroom is a big no-no. I said we had to go home because until he was potty trained that was the only place we could be because I can't take little boys who poop wherever they want to out of the house because I don't have the necessary tools to clean up after him everywhere we go. Until he can go poop in the potty there would be no more trips to the park or class parties or museum days. I can't spend my whole life watching his face to see whether or not he was getting ready to poop.

He was pretty upset about leaving. And Miriam was pretty sad that we didn't stay all day. But we all got over our sadnesses (and hopefully will be more proactive about our bowel movements in the future because otherwise I'm going to have to invest in some hair dye).

I haven't even started elimination communication with Zoë, though I have set her on the baby potty a few times (and she hates it, so that's going well...not), because I am too frazzled trying to keep track of Benjamin's pooping signs to bother with Zoë. The odds of her being completely potty trained—day and night—by 18 months (like her sisters) are looking pretty slim. And I'm so sad about that because I'm so over potty training Benjamin. I don't know where I went wrong with that boy.

Also, I made him scrub the bathroom floor today (which he hated) because he has terrible aim and the floor is disgusting and I have to clean it, like, every day. It stinks. Literally. It. Stinks. I'm hoping that if it's his job then he'll be a little more careful about his aim. But he probably won't.

Wasn't this post supposed to be about Christmas parties? Oops.

Anyway, the parties celebrations were fun. We're looking forward to our winter break!
Posted by Nancy at 10:22 PM