We went to the zoo today. Our dear home teacher gave us a pass to the zoo for Christmas this year (we already had purchased a pass but the zoo just tacked on his gift to the end of our original pass so now it won't expire until, hopefully, after Andrew has graduated...fingers crossed) and on Christmas Eve when we went to carol for him (we missed him when we went out on Monday night) he and his wife talked it up so much that we decided to take the kids today while the weather was dry because we're due for another full week of rain again next week.

I have several stories about the zoo (and Christmas as well) but I really ought to be getting to bed because Zoë is teething fiercely all day and all night so I was up with her screaming in my face until 3 AM again last night. I'm feeling not unlike this tired ol' bear we saw today: 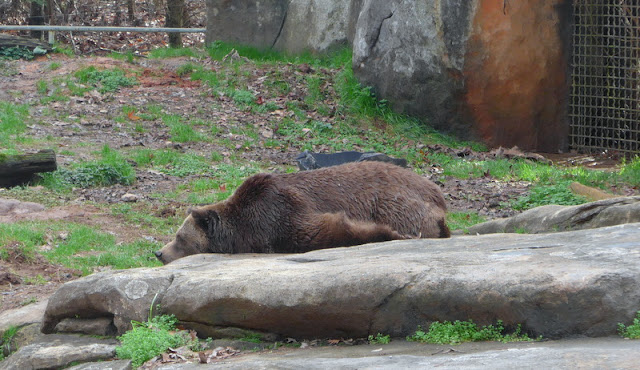 So I will tell just one quick story.

"Well, it sounded like perfect. 'This water is perfect.' That's what he said, wasn't it? But then...why would it be yuck?"

"It doesn't sound like perfect to me," Andrew said.

"Don't be ridiculous!" I said. "How are you getting 'cow poop' out of pear-sit?"

"Not cow poop, cow poop," Andrew explained. "Male cow poop, to be precise, and not a very good word for poop."

"Benjamin, quit yelling," I chided. "What are you saying?"

The doctor said he's doing fine if we can understand 50% of what he's saying at this age (and we can) but the other 50% can be so exasperating for everyone (most of all Benjamin).

I think we'll teach our children the card game BS (cheat) and tell them it stands for 'bear spit.'

Later on in the day he saw a stream and said, "Look! A little river! Do you know what else Little River is? Little River is a school!" But because he's Benjamin it came out, "Ook! A itta izza! Do oo know ut else itta izza is? Itta izza izza shuh!"

We couldn't stop saying, "Itta izza izza shuh!" the rest of the afternoon.

Considering we thought he'd never talk, I'd say he's doing quite well. And he's certainly doing his best to make up for his long silence. He talks all the time and when he can't think of anything to say he'll do whatever else he can to fill the void. While we were driving to the zoo things got a little too quiet for him (though Andrew and I were trying to carry on a conversation) so he just opened his mouth and let out a long, droning, "Ahhhhhhhhhhhhhh!" for no reason at all (other than that he's Benjamin).
Posted by Nancy at 12:29 AM