"Hey! It's me, your favorite Anziano Heiss! I finally got your e-mail address..."

"Wow—I'm home and am typing on an American keyboard.... If you want we can meet each other on campus somewhere around 5:30ish and eat something..."

Because "if she says yes, you're in. It's like a secret code girls have." That's a quote from the movie Elf, which, incidentally, we watched on our honeymoon. Anyway, I said yes. He'd just been released around 1:00 that afternoon and I was, in his words, "the first non-missionary, female contact" he'd had in two years, so it was a little awkward. He asked me if I had a scripture marking system. Because he has the best pick up lines.

In truth, Ross was trying to set Andrew up with his sister Stormie but when Andrew told him he'd rather go with me than with her they cajoled their roommate Beryl into coming along to be Stormie's date. And then Beryl didn't come! So it would have been the most awkward date ever...and probably was for Stormie...but I don't think Ross and Anna or Andrew and I even noticed.

The boy went on one date with Stormie. One. And then he asked me to be his girlfriend. Six days after coming home from his mission. So I said yes. Because why not? Neither one of us knew how relationships were supposed to work. Relationships don't come with manuals, so that was okay.

We went to do baptisms for the dead at the temple and when we were walking back to the car he stretched his arm out in front of me and so I grabbed it. Apparently he was just stretching. How awkward were we?

To which I gracefully replied, "Uh...thanks."

No quote comes to mind for this night. Just know that we had our first kiss. Ever. Both collectively and individually.

"Hypothetically speaking...could that ever happen?"

We'd gone to the temple to do baptisms again and there was this Italian Boy there, too. He and Andrew were talking to each other in the changing room and their conversation continued from the lobby and out the front door. I walked along, holding Andrew's hand, and trying to make sense of their conversation, which was happening in Italian. I was in an Italian 101/102 class at the time.

Italian Boy, quite embarrassed, ran off into the night, leaving the two of us lingering in the most awkward silence of all awkward silences. Finally Andrew cleared his throat and said, "So...hypothetically speaking...could that ever happen?"

He never did propose properly.

I woke up from my last sleepover with my cousin Heather. We started getting ready for the big day. She helped me with my makeup because I'm hopeless in that arena (she also made my bouquet and took pictures for us). We made some macaroni and cheese for lunch. Halfway through eating it we noticed that it was completely weevily. We shrugged and finished eating anyway.

Then we headed to the Mt. Timpanogos Temple and I got married.

It was naive. It was hasty. It was crazy. It was perfect. 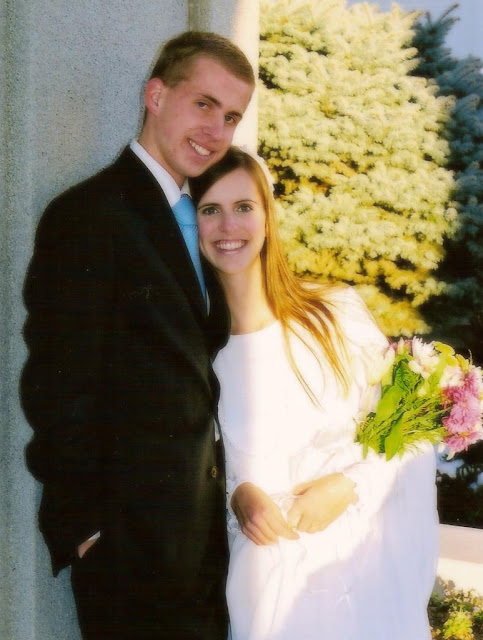 We've got a whole decade of experience under our belts now, four beautiful children, and more education than we can chew. And yet we still seem to be bumbling along in life, but at least we're bumbling along happily.

Ten years down, the rest of eternity to go!
Posted by Nancy at 11:47 PM