I was excited to sing with the choir on Sunday because we held our Christmas program. Last year I missed singing with the choir on Christmas Sunday because we were visiting family. I was a little sad about it because singing is such an important part of my worship. It's almost depressing for me to sit in the audience and listen to the choir sing on Christmas Sunday (although the choir I listened to was lovely); I much prefer to sing. I'm not the world's greatest singer, but I do believe singing is good for the soul—or at least for my soul. It's one way that I've found my soul communes with God.

For our closing song this past Sunday the congregation sang Silent Night while the choir sang Peace, Peace (by Sylvia and Rick Powell) and it was beautiful. I wish we could have sung it more than once because we never quite got the full effect while we were practicing it. It was so, so beautiful.

The other pieces we sang (as a choir) were Guard Him, Joseph (by Sally DeFord), which I was lucky to get through without tears (I have a hard time singing "when his mother's arms be weary / hold him gently as thing own / for thou has within thy keeping / God's own well-beloved Son") and King of Kings (by Betsy Bailey), which I mostly loved except that the music immediately made me think of the rhythm of, well, riding on a camel, but we cut the verse about the wisemen seeking (for time constraints) and also I wanted to sing a big swelling JOY, JOY, JOY to the world at the end and our director wanted us to sing it, like, staccato, which, mixed with the high pitch of the note made it a little squeaky *joy*joy*joy* which didn't sound joyful to me at all. But other than that...it was great.

The bishop asked the congregation to sing two extra songs because we ended up not using all of our meeting time (should have kept that verse about the wisemen, eh?) and I was fine with that because more singing! He spoke about how there aren't many presents he remembers getting for Christmas; rather the memories he has are of his family giving. His family would choose a couple of families to dote on during the twelve days leading up to Christmas (yes, a little backwards from the actual twelve days of Christmas, which start of Christmas day, but a fine tradition notwithstanding) and would secretly deliver presents/necessities/treats. He spoke about how sneaky they had to get once the families had caught on and were expecting gifts.
Eventually word of the "Secret Santa" spread through the ward (this happened in Utah where wards and neighbourhoods are basically the same thing) and they heard rumblings of other families doing it as well.

But that's what his favourite holiday memories are of—giving things away without hoping for anything in return.

It was quite timely, then, for our doorbell to ring on Sunday evening while we were in the throes of Sugar Cookie Purgatory. Who was at the door? No one, for they'd stealthily fled before we came to the door. They left a package filled with toys for the children, though, with a card that read, "from your Secret Santa." The children were overjoyed! 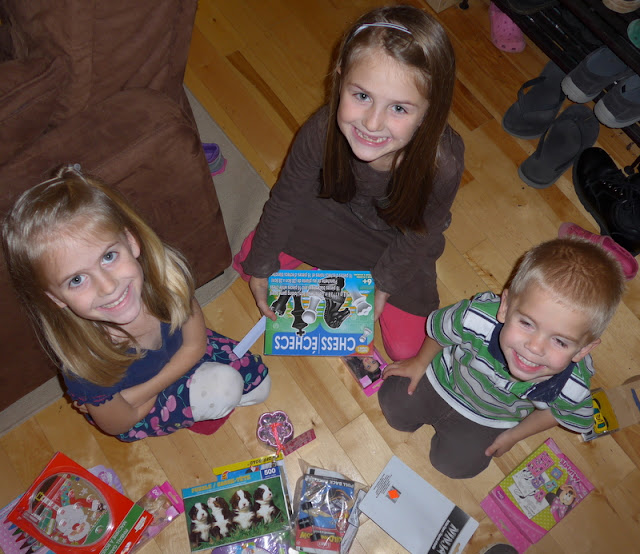 I don't think it was the bishop's family (that would be a little too obvious after his talk, right?) but I'm pretty sure it was someone in the ward because I know at least two other families got hit that night.

It was certainly a wonderful surprise!
Posted by Nancy at 10:15 PM