Zoë doesn't particularly enjoy crawling on the hardwood floor so she's now doing the bear walk everywhere she goes. Here she is demonstrating her skill:

She recently stumbled upon an open dishwasher for the very first time and found it quite enjoyable. She's gotten to that age where it's easier for her to be getting into the tupperware while I'm cooking, rather than have her wandering around the house. She doesn't take kindly to being penned up so instead of listening to her scream from her high chair or exersaucer I will sometimes just open the cupboard and let her play. She hasn't figured out how to open cupboards on her own yet, though I'm sure that day is coming.

Speaking of not liking being penned up, I left Zoë crying in her exersaucer today while I was figuring out dinner and the kids were playing hide-and-seek. I knew they'd left marbles out and with their game going on I couldn't be sure which doors were staying open or closed so taking away Zoë's mobility seemed like the safest bet. But then she stopped crying so I peeked out of the kitchen to check on her and she was gone, which explains why she was happy. I went on a little hunt for her and found her exploring the bathroom.

Having older children is great when they're helping but not so great when they're not helping. I explained to Rachel that she was in the exersaucer specifically because I needed her to not be underfoot for a few minutes and to keep her safe while I wasn't supervising her. I told her that if she happened to take the baby from a safe-zone that I put her in—the high chair, the exersaucer, her crib, whatever—then she was accepting the responsibility to watch the baby until I came back for her.

"But she was crying!" Rachel said. "She wanted out!"

"But she can't just wander around the house unsupervised," I pointed out, rehashing the choking hazards and other dangers curious babies find.

Rachel's always quick to acknowledge when I make a good point, which is just one of many things that I like about her.

Anyway, it annoys Benjamin to no end when Zoë mucks around with things. He's constantly taking things away from her (collecting choking hazards is his favourite past time) and shutting things (and on the flip side giving her things she shouldn't have and taking her places she shouldn't be).

Here's Zoë in the middle of doing a dishwasher happy dance: 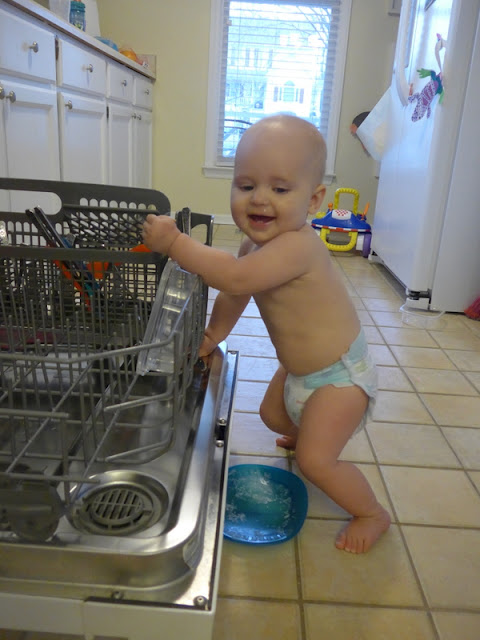 And here's Benjamin trying to explain to me why I should stop her from playing in the dishwasher: 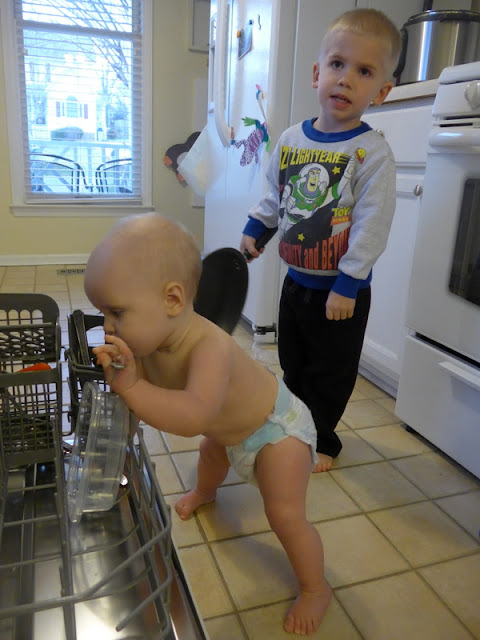 Doesn't he know playing in the dishwasher is basically a rite of passage for first-world babies?

Benjamin wanted to get the marble run out today, and I told him that he could if he kept his bedroom door closed so Zoë wouldn't be tempted to join him. He happily skipped off only to find no marbles! He came out of his room crying and wailing so I went to look for the marbles with him but soon gave up when I found out they were not in the bin. We'd cleaned them up just before bed the night before. Miriam had brought me the sac of marbles and asked me to tie it closed, which I did before handing it back to her and telling her to put it away.

The bin holding the track never got put away—it had been left sitting in the middle of their bedroom floor—so I couldn't imagine where she'd put the marbles. Why not just put them away in the box in the middle of your room?! Why put them somewhere else?!

"Now what can I play in my room with my door closed that's a choking hazard?" he wailed.

Playing with choking hazards is considered a precious privilege for Benjamin. I suggested Littlest Pet Shops and he sniffed, "Yeah, okay. They have lots of small parts, don't they? And Zoë can't play with them because it wouldn't be safe. So just I can play them with my door closed."

This is as important to his induction into big-kid society as dancing at the dishwasher is to Zoë's mobile-baby stage. Life is full of little victories.

After playing with pet shops for a while Benjamin got lonely and dragged his cars out of his bedroom. He sat on the floor and set up a game for himself and nattered on to me while I nursed Zoë. 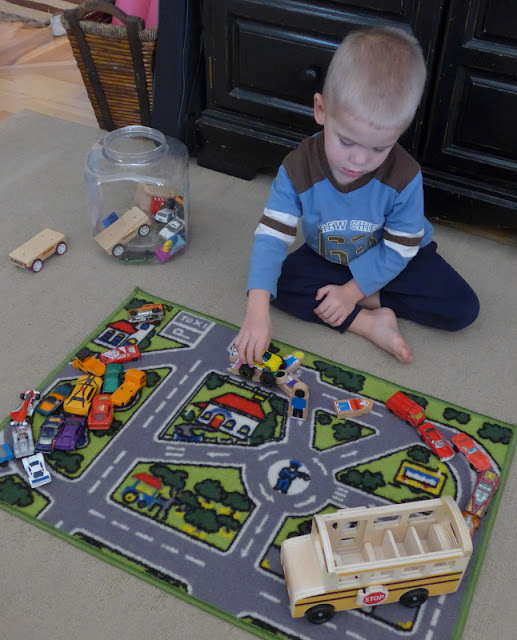 At one point I heard him say something about "getting dead" all the "dangerous muggles" and I looked over to see that he had lined up all the schoolchildren and was taking them out with a monster truck while their school teacher (probably Snape, let's be honest) looks on. I don't know how (or why!) he comes up with this stuff. He has a slight affinity for the dark arts (which I hope to wring out of him at some point).
Posted by Nancy at 11:45 PM