Leap years are pretty busy, if you think about it, what with all the leaping, olympicking, and campaigning going on. I, for one, am sick of campaigning already, and so for our special leap year FHE we (I) decided to hold our own Leap Year Olympics.

We talked about the Olympic motto: CITIUS - ALTIUS - FORTIUS (and Andrew then pulled up the MoTab performing Call of the Champtions for background music) and discussed the significance of the -er suffix. Faster! Higher! Stronger!

Then I introduced the first Olympic value—excellence—and read some snippets from a talk that President Hinckley delivered in September of 1999, focusing on the part where he said, "Let us all try to stand a little taller, rise a little higher, be a little better. Make the extra effort. You will be happier."

Our first event was jumping on our new pogo stick thing: 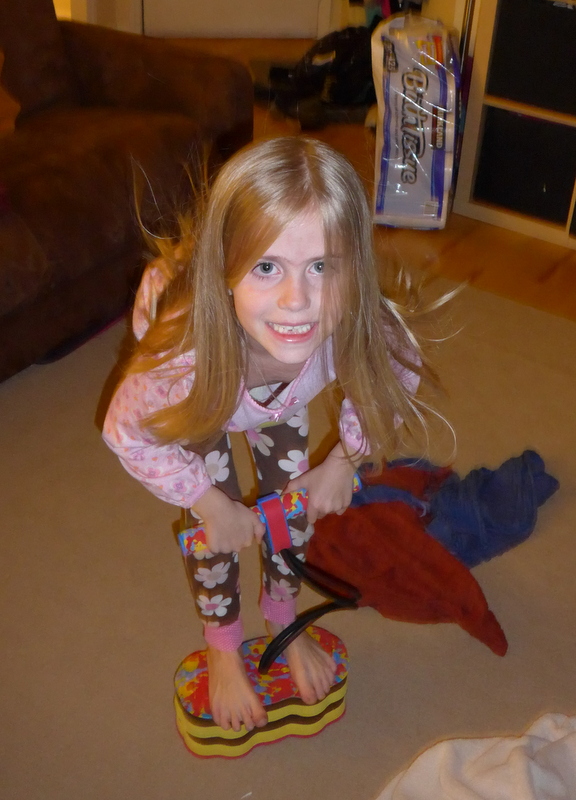 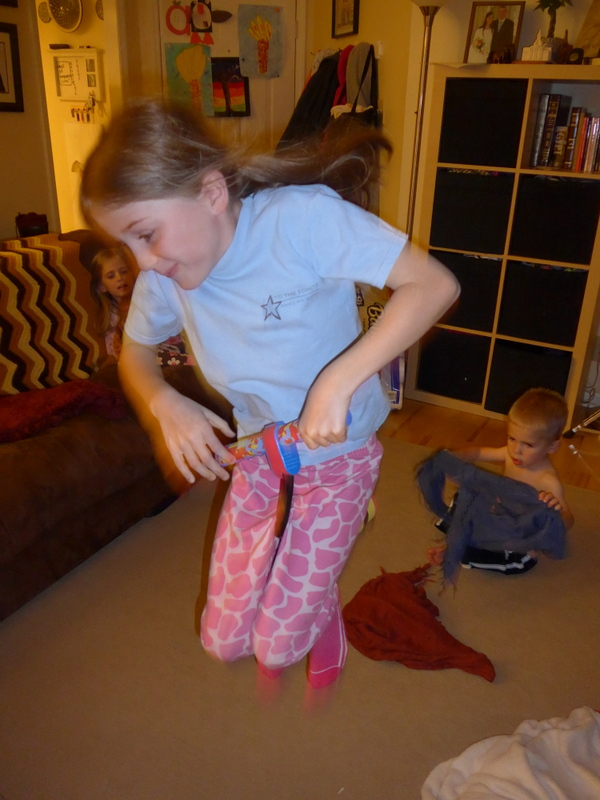 Andrew and I both scored a perfect twenty (that was the maximum number of bounces allowed), the girls both scored in the teens, and Benjamin scored...two. He's still a little small for the pogo stick, but he did better than Zoë. She scored 0.

She really needs to work on rising a little higher, I'd say!

The next value we talked about was friendship—and building "mutual understanding among individuals and people from all over the world." It was serindipitus that at the exact moment I was reading that quote from the Olympic symbols booklet the MoTab video started panning over the children dressed in traditional costumes of different countries. The kids wanted to know why, so we talked about that and than I introduced a talk by Kathleen H. Hughes (April 2005), zeroing in this part: "As a Relief Society presidency, we sometimes hear women say that they don’t feel the love of the Lord. But perhaps they would feel more of His love if they looked for His hand in the actions of those who care for them. It may be a member of their branch or ward, a neighbor, or even a stranger who blesses them and manifests Christ’s love."

We talked about Benjamin's new dump truck—and how Heavenly Father used our neighbour to show His love for Benjamin.

We read the story of Joseph Smith saying that he feels sorry for a family's calamity "to the amount of five dollars" and then asked the people he was talking to how much they felt sorry, and discussed how it's important to "turn our good feelings into practical assistance" and jump on the opportunity to "serve as an agent of God in answering a prayer."

I also loved this quote by Elder Eyring that Sister Hughes used: “You are called to represent the Savior. Your voice to testify becomes the same as His voice, your hands to lift the same as His hands.”

Our next event—to hammer in the importance of friendship and cooperation—was a three-legged race around the house. This got a little wild, but I think everyone had fun. 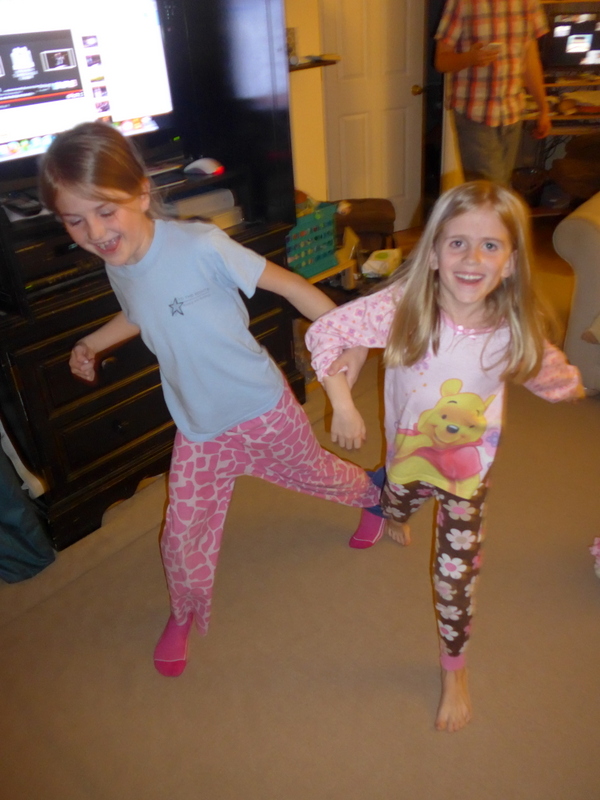 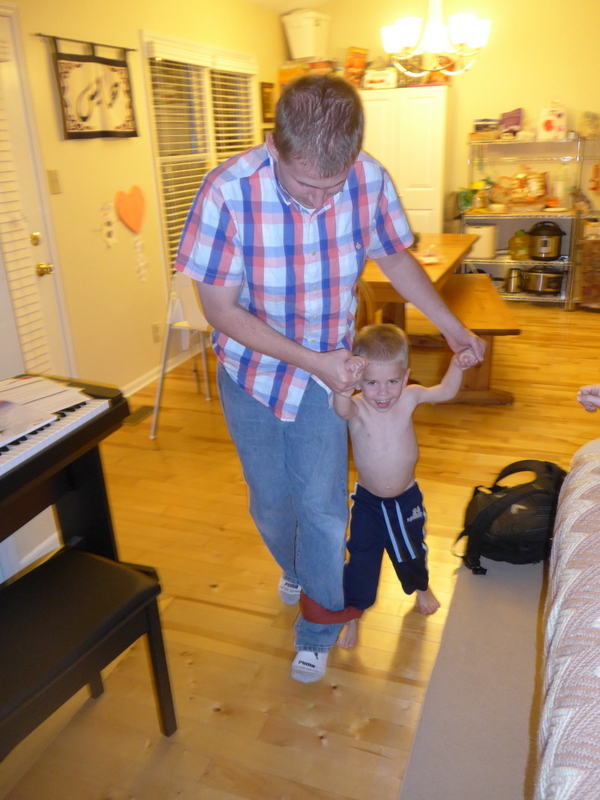 At the end of Rachel and Miriam's (first) turn, Rachel bailed on Miriam and leapt into the living room across the finish line, completely forgetting that she was tied to her sister. That didn't end well, but surprisingly it was better than their second run, which ended in tears in the kitchen (because they couldn't make their legs cooperate).

I think Andrew and Benjamin won that round, taking 18 seconds (more or less) to race around the living room and kitchen. Probably more. Miriam forgot to stop the timer and by the time Andrew grabbed it from her it had already hit 23 seconds, so he guessed that they took 18 seconds and wrote down 18 seconds, even.

Rachel and I ran it in 18.33 (despite our own little scuffle in the kitchen about inside/outside legs).

President Hinckley wasn't kidding when he said, "The distance between mediocrity and excellence can be ever so small," sometimes "measured in tenths of seconds. The little extra effort we make becomes such a tremendous difference."

The third Olympic value is respect—to one's self, to others, to rules, the environment. And don't forget—just say no to doping!

We talked about Sister Margaret S. Lifferth's April 2009 talk about how we are all children of God and how our "reverence for God is strengthened as we show respect for each other."

Then we played Simon Says, which, believe it or not, caused the most drama.

It was mostly my fault. We were on our final round before calling it an evening and everyone was doing their very best to make that round last as long as possible (anything to ward off the eminent bedtime hour). Suddenly Miriam ran out of the room and down the hallway, so I said, "Oh, Miriam's out!"

"WHAAT?!" she yelled from the bathroom. "I just had to pee! That's not fair!"

There were tears, lots of tears.

And then Rachel jumped on Andrew (the kids might have been slightly wound up) and got in trouble and then got mad about being in trouble because we, as her parents, "DON'T UNDERSTAND ANYTHING!"

She threw a classic three-year-old Rachel fit. We haven't seen a fit that good in ages.

Rachel is, frankly, quite level-headed and mild-mannered now...usually...so we don't see this side of her very much. When she was younger we could expect screaming-until-foaming-at-the-mouth Rachel to be with us for several hours every day. She only pops up once in a while now before logical, sweet, real Rachel comes back.

This evening she came out after she finished with her truncated reading time (punishment of all punishments) and apologized to me for her behaviour without any prompting at all, which was really quite sweet of her.

I guess she already knew I'd had a rough day with Benjamin (because Andrew gave her a lecture about needing to have a little patience with her younger brother (she nearly throttled him for doing some dumb thing outside) because when she starts fighting with him then it's just another thing for Mom to deal with and did she even know what Mom had dealt with so far today (hello—peeing on the front porch, flooding the kitchen, peeing in my friend's yard...in addition to a billion other run-of-the-mill Benjamin things)?) so she felt bad for acting up.

I really had already handled quite a bit of acting up today! But, honestly, everyone loses their cool every now and then. I totally understand that. And it's quite grown up to collect yourself, realize you were in the wrong, and apologize for your behaviour without prompting—which is something Rachel never did as a three-year-old (and I guess isn't really something I'd expect a three-year-old to ever do, necessarily). She's certainly growing up well, if I do say so myself.

We can put this one down in the books as a successful family night activity. There were plenty of tears so you know it was legit!
Posted by Nancy at 11:35 PM