"And please bless that Zoë will sleep through the night on Thursday," she said.

Andrew and I peeked at each other with one eye to silently communicate that we both thought this a strange—and oddly specific—request.

"...So that Mommy will feel up to coming to my class Valentine party on Friday," she finished.

I made it to her Valentine party today.

Rachel had to be to school early for Science Olympiad, so Andrew drove her to that while I helped Miriam finish getting ready for school. She was beyond excited for Valentine's Day—she handmade cards for everyone in her class, she picked out a 95% pink outfit (her socks were brown with monkeys and hearts on them), and she was praying so hard that everything would run perfectly smoothly the whole day. So I put a little heart braid in her hair for good measure. 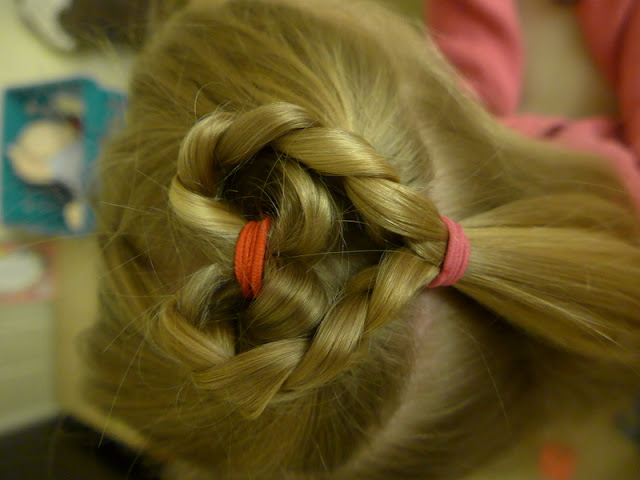 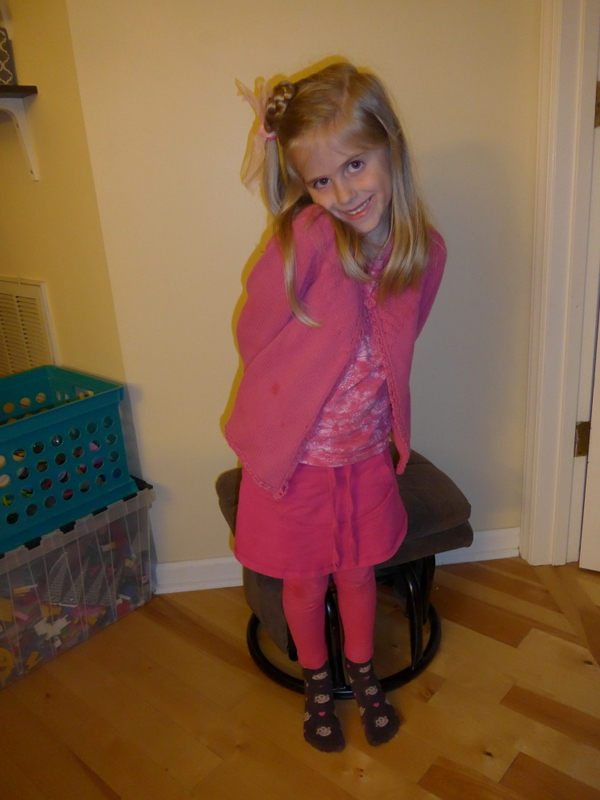 I put Miriam on the bus and then started getting ready for the day. I'm a stay-at-home mom, guys. I literally stay at home. Especially when the weather is too cold for Andrew to take his scooter to work so he takes the van. Then I super literally stay at home. Like, maybe we take a walk to the park or something but other than that I'm very much at home a whole heck of a lot of the time.

All that was to introduce this thought: sometimes leaving the house can be scary, specifically packing stuff to leave the house, specifically when I'm going to be gone from just-after-breakfast until dinner.

"Are you going camping?!" Andrew wanted to know (he worked at home today because I needed the van and he didn't want to ride the scooter (it's literally freezing outside—barely, but literally)).

On today's schedule:
I had to pack a diaper bag, lunch for me and Benjamin, cupcakes and fruit for the class party, four ukuleles, a stroller...need I go on?

Things went pretty well. I was on time to VT #1, but late to VT #2. I asked VT #2 if there was "anything" I could do for her and she said there wasn't but that she'd let me know if anything came up. I completely missed lunch coverage, which was fine because another mom showed up (thank goodness!). Rachel's party was cut short by an assembly her teacher didn't know about beforehand (and their whole day was skewampus because of an impromptu fire "drill" that wasn't a drill (more on that later)). But the party went well and Benjamin got to have a cupcake with pink icing (which is the only thing he wanted in the whole world).

It's a darn good thing I went to Miriam's Valentine celebration because her teacher's aid (my friend Suzi) pulled out a paper to show me—three pages long!—that Miriam had written all about how she really wanted me to be there and how I sometimes just can't do things because Zoë never sleeps and will scream all night and that makes me tired (which is a true story).

Evidently I didn't end up signing up for P/T conference but I got to talk to Rachel's teacher anyway and she's doing just fine.

We got out into the school parking lot a little after 4:00, having killed enough time chatting with Suzi that we didn't arrive too early for ukulele practice. I was just buckling Benjamin into his car seat when a red van pulled up beside me.

"Nancy!" the driver called. It was VT #2 (who happens to be my good friend Marian). "You may have just saved my bacon! I'm super late picking up Alden but my van wouldn't start so I had to jump the battery and I don't want to turn it off because I'm afraid it will quit on me again. You're not in a hurry are you? Do you mind just standing by my van while I run in to get him?"

I told her that would be fine, so she ran in to get Alden, and then explained the story to me when she got back.

Usually he rides the bus home but they had somewhere to be after school so she thought picking him up would be faster...until her van wouldn't start. The bus drove by while she was still trying to jumpstart it. She called his teacher to let her know she was running terribly late, finally got the van started, and came to the school, but then didn't know what she was going to do. She was just praying that things would work out.

"Where are you headed now?" she asked. "You said you had a full day."

"Of course," I said (Marian used to play with us but had to drop it from her schedule).

"Hmmm...I have Rosie with me. I'm supposed to drop her off. Can I maybe send her with you? I'm headed in that direction but it's a little out of my way and I'm so late..."

Do something for your visiting teaching sister—check.

(Kidding, kidding. I know it's not a checklist).

"Since we're going to Rosie's very own house I think we can manage giving her a ride," I said, and after playing a little car seat shuffle I finally had all my kids—and Rosie—buckled in. We made it to ukulele right on time.

Now I'm appreciating the miracle of Zoë sleeping on Thursday night—because she's still wide awake. She only napped for the half hour Rachel's class party lasted (on a little bean bag chair in the corner of the classroom, magically tuning out all the noise of 25 eight-year-olds) and then again on the way home from ukulele (and half-way through the time it takes me to eat a burrito).

Boy, I wish she'd sleep as well as she did last night!

Any sleeping at this point would be most welcome (after all, we got home from ukulele seven hours ago)!

Did I mention that I was out of the house all day long when I'm very much used to being home. I'm completely worn out! Why isn't she?!
Posted by Nancy at 1:18 AM