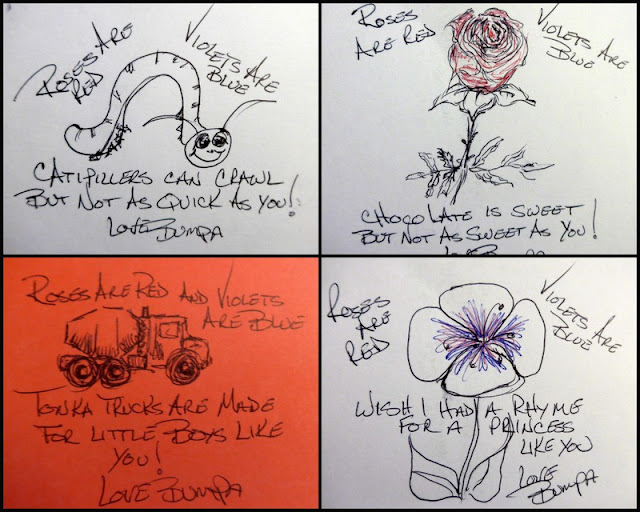 Rachel was drawing today and came to ask me if I thought she inherited her ability to draw from Bumpa. "Because I know I didn't get it from Dad!" she said.

I think family members are often inspiration for practicing, though, so perhaps in that way her desire to draw well was inspired by her Bumpa.

Anyway, it was fun to get these cards in the mail, especially because we were slackers and didn't do Valentines this year. I've just been so tired—too tired to think that far in advance, anyway.

Zoë went to bed at 2:00 AM, didn't sleep through the night, got up for the day at 9:00, finally went down for a nap at 4:00, woke up at 4:20, and then went to bed at 8:30. I'm hoping she's down for the night but I just don't know (and even if she's "down for the night" it will still involve waking up a few times because she's only slept more than three hours at a time a handful of times in her whole life).

Andrew guessed that she'd wake up at 9:00, but we're already past then, so hopefully she'll just keep sleeping for a while longer...

Thank you for the cards, family, even though we didn't send you any.

I loved how Josie referred to Benjamin as Bew, and that she accidentally wished him a Happy Birthday instead of Valentine's Day (we took him grocery shopping today and he kept asking for all sorts of things and when we'd say no he'd say, "For my birthday, then?" and we'd say, "Maybe," so perhaps wishing him Happy Birthday wasn't a bad idea because he really wishes it was his birthday (also, you should come to his party (in June) because if he gets everything he wanted we're going to be having an epic feast)).

It reminded me of when Patrick signed Andrew's birthday card "Love Uncle Patrick" before realizing that it was Andrew his brother-in-law's birthday, not Andrew his nephew's.