On Wednesday night I was finalizing a limerick writing activity for Rachel's class Valentine celebration. I don't know that they ever got around to finishing their limericks because our party was cut short by the assembly and their morning was cut short by the fire "drill" excitement so they were having a crazy day. Whatever the case, getting ready for this activity sure got me in a limerick-y mood. I started composing limericks in my head throughout the day as I dealt with Benjamin and Zoë and when I had theirs mostly finished I figured I should write poems for everyone else, too. So I did.

I made little bookmarks out of them and busted out a few books for them to enjoy tomorrow. 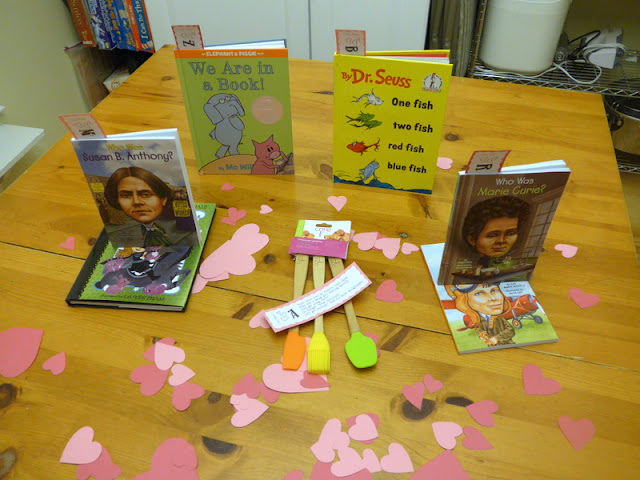 Andrew doesn't get a book. He gets the little set of kitchen gadgets.


I was so excited about his poem I could hardly wait to give it to him (and he's read it by now, obviously, so it was still "early"). It's got just the right amount of sauciness to fall into the category of limerick. After reading more about limericks than I think I ever have while I was preparing the activity for Rachel's class I asked Andrew why we even study limericks in elementary school—they're known for being "obscene with humorous intent," which isn't often heralded in the classroom.

Here are my limericks: 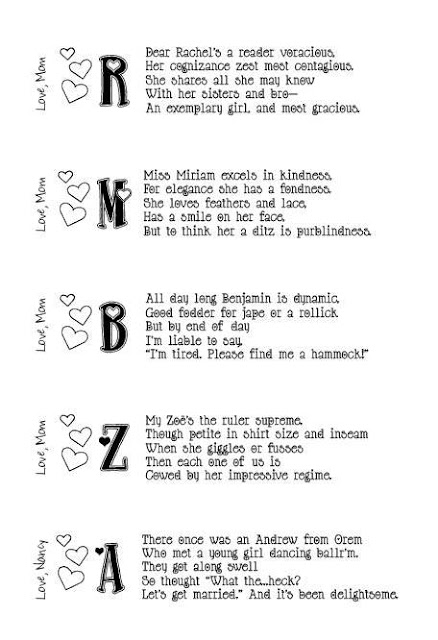 And in text form, in case you can't read the picture:

Dear Rachel’s a reader voracious,
Her cognizance zest most contagious.
She shares all she may know
With her sisters and bro—
An exemplary girl, and most gracious.

Miss Miriam excels in kindness,
For elegance she has a fondness.
She loves feathers and lace,
Has a smile on her face,
But to think her a ditz is purblindness.

All day long Benjamin is dynamic,
Good fodder for jape or a rollick
But by end of day
I’m liable to say,
“I’m tired. Please find me a hammock!”

My Zoë’s the ruler supreme.
Though petite in shirt size and inseam
When she giggles or fusses
Then each one of us is
Cowed by her impressive regime.

There once was an Andrew from Orem
Who met a young girl dancing ballr’m.
They got along swell
So thought “What the...heck?
Let’s get married.” And it’s been delightsome.

I'm sure that last bit of Andrew's poem would've shocked my grandma. Twenty years ago it may have even shocked my mother. I remember when we first started hearing the word "heck." Or at least when I first started hearing the word heck. I'm not sure when it was exactly, but I know I was nine or younger because it was when we lived in BC. We'd had the missionaries over for dinner and they said it and I had no idea what it meant. I don't think any of us did. So they explained it and my mom told us specifically not to say that word.

But eventually we moved to Utah and, let me tell you, it is such a Utah thing to say.

So I don't think my mom finds it scandalizing anymore.

Andrew didn't have anything for me and felt bad but when we went shopping today I saw these little money trees and they looked like something I could maybe keep alive, so Andrew got them for me (it's a set of two but this is a picture of just one, obviously). 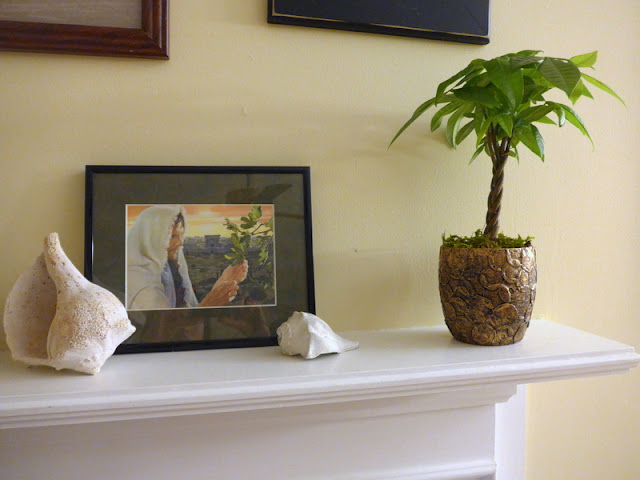 I'm always on the hunt for houseplants that look like I might be able to keep alive. More often than not I kill them. But the orchid Andrew got me two years ago is still alive so I'm feeling confident enough to add another houseplant or two. We'll see how things go. At any rate I figure they're about as expensive as a bouquet of roses, which are 100% guaranteed to die, right? So at least I get to enjoy these plants for a while longer...before they succumb to neglect.

I don't know why I've written so much about Valentine's Day this year. I have no decorations up at all (except for the paper hearts I just scattered on the table) and we rushed through school Valentines (seriously did them the night before like five minutes before bedtime) and didn't even make Valentines for each other (except for these limericks).

I honestly can't tell if I'm excited about the holiday or if I'm not...

But maybe I am because tomorrow is pierogi night. So, yes, I'm excited.
Posted by Nancy at 12:41 AM