I seem to have become a weekend blogger lately and I suppose that's because there's not much to tell. We've been passing around a sickness and have been stuck at home doing not much at all. I'm bored out of my mind but until we stop coughing I don't think we'll be going much of anywhere.

Benjamin's been enjoying Sunbeams. He had a timeout in his classroom during sacrament meeting on Sunday (he was misbehaving, apparently) and he wrote his name on the chalkboard in big letters (once he was out of timeout) for Andrew. BEW. 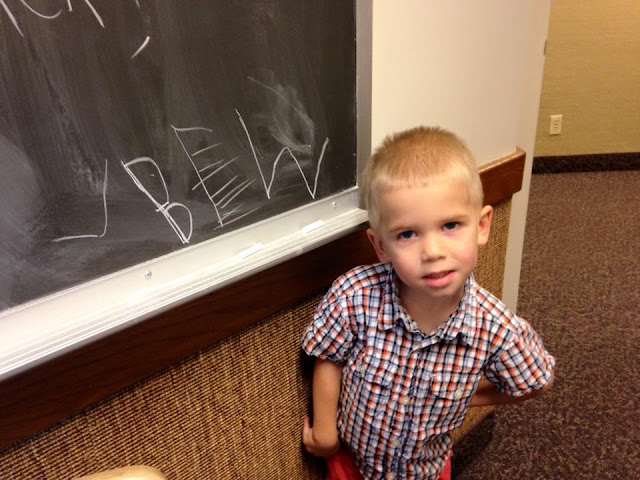 He's learning other things in Sunbeams, besides how to write on a chalkboard. Yesterday morning he went into the bathroom to wash his hands and while he was in there he was making faces at himself in the mirror, spitting, and growling, all of which is pretty far for the course. Then I heard him yell, "SATAAAAAAAN!!!"

He talked about Satan for the rest of the day. Apparently he learned about him in his class.

For a child obsessed with "the dark side" it wasn't a surprise that Benjamin latched onto the idea of Satan so readily. He kept changing his mind about who he wanted to be when he grew up—"Luke Skywalker! No! Darth Vader! No! Satan! No! Satan's Father!"

"Stick with Satan's Father," I said. "That's a good idea for how to be when you grow up, okay?"

I'm fine with him wanting to be like Heavenly Father, though I'm not sure he realizes that that's who Satan's father is.

Valentine's Day is coming up, obviously, and Benjamin keeps asking if we'll be going to Mimi and Rachel's class parties. I'm in charge of Rachel's so we'll likely all be going (if we hurry up and get well already) and he just loves visiting Miriam's classroom so any excuse will do. Plus, last time they had cupcakes and so he's excited about that prospect as well, though I told him I couldn't make any promises.

"Can we make our own cupcapes?" he asked.

"Yes, we can make them some other time," I promised. "Maybe for Sunday."

And maybe we will. It is Valentine's Day, after all.
Posted by Nancy at 9:56 PM