On Monday we had (yet another) family night lesson about prayer, more particularly about how to behave properly during prayers. We had a short discussion about how we can pray to Heavenly Father anytime, anywhere, geared toward the girls and then for Benjamin's benefit we went over the ditty "we fold our arms and bow our head and listen while the prayer is said." I made up a little paper doll with moveable arms and head and Benjamin helped the doll get ready for the prayer.

Then I said, "Now we're going to get ready for prayer and see if we can sit quietly for one minute, okay? Everyone get ready. We fold our arms and bow our head and listen while the prayer is said. Good. Now everyone get ready to be so, so quiet and still...starting...right...now!"

Benjamin surprised us all by starting to pray. It was such a thoughtful prayer at first, but soon turned painfully hilarious. The seconds ticked by slowly as we listened (and tried not to laugh) while Benjamin went on and on about his dump truck, of all things.

"And thank you for my dump truck, even though I don't really like it," he said. "I do like the blue part on the back, but I don't like the yellow part on the front. I prayed for you to change it but it's still just the way it was. But I like it anyway, I guess."

The boy went on and on and on—for well over a minute—and when he was finally finished I tacked a post script to our FHE lesson.

"Heavenly Father always answers our prayers," I said, "That's true. But sometimes the answer is 'no' or 'you need to be content with what you have.' We should approach Heavenly Father with our righteous desires, not a checklist of things we want. What I'm saying, Benjamin, is that it might feel like Heavenly Father isn't answering your prayer about your dump truck when really he's saying, 'I recognize that you aren't happy about the situation you're in but you still have to go through it.' Or maybe he'll just let things stay the same because He knows they're not that big of a deal in the long run. I'm just not sure Heavenly Father cares that much about toy dump trucks."

And I knew for sure that I wasn't going to get him a new dump truck just because he didn't like the one he had!

Explaining things like that to children—or even adults!—can be so, so hard. I have a testimony of prayer. I have seen miracles worked in my life time and again, from earning the exact amount of money we needed to pay Andrew's tuition, to feeling comforted and sustained during Benjamin's speedy delivery, to knowing that marrying Andrew was a good idea.

As a child I remember finding a lost pair of slippers, remembering that answer on a test, and having our swerving-out-of-control-on-an-icy-mountain-pass van stop when my mom screamed, "Heavenly Father! HELP!" I remember praying for my lost sister, my runaway sister, my homeless sister—and I saw those prayers answered, too.

I also know there have been times in my life when I've been praying for the wrong things—or at least not the right things—and Heavenly Father has told me no or shown me a different path or let me muddle through things in order to learn and grow. He's always answered my prayers, just not always the way I expected or wanted.

Yesterday I learned another lesson about prayer, however, and it is this: Heavenly Father even cares about toy dump trucks.

I was nursing Zoë yesterday afternoon and Benjamin was sitting on the potty yelling at me to come help him wipe when the doorbell rang. I sighed heavily, trying to decide what to do and feeling pulled in a million directions.

I unlatched Zoë and went to the door to peek through the peep hole. It was our neighbour from up the street. I quickly made sure I was modest and opened the door.

"Hi!" he said. "We bought a set of gifts for our grandkids this year for Christmas and we have one extra sitting around at our house. So I was wondering if perhaps we could give it to you. It's a little dump truck and I just thought Benjamin would love it, so if it's alright with you I'll bring it over."

"Sure," I answered, feeling a little flabbergasted as a voice inside my head said, "I care about everything."

"I'll be right over," our neighbour said.

I put Zoë down and ran to wipe Benjamin's bottom. We got to the door just as our neighbour was returning with the dump truck. Benjamin's eyes lit up.

I don't think there was a happier child on the face of the planet yesterday afternoon.

Here's Benjamin with his new and old dump trucks: 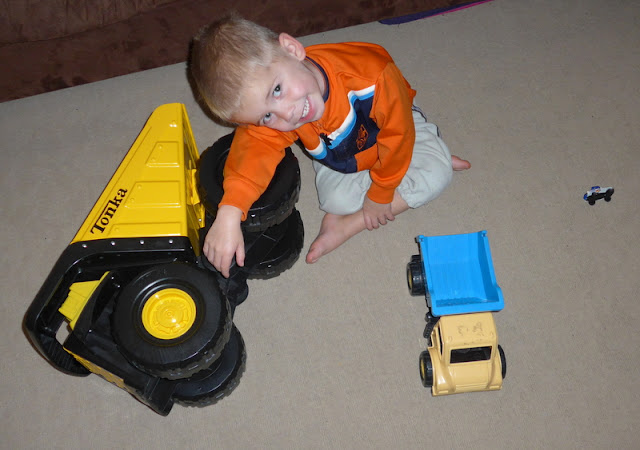 And here's Zoë taking a ride in the back: 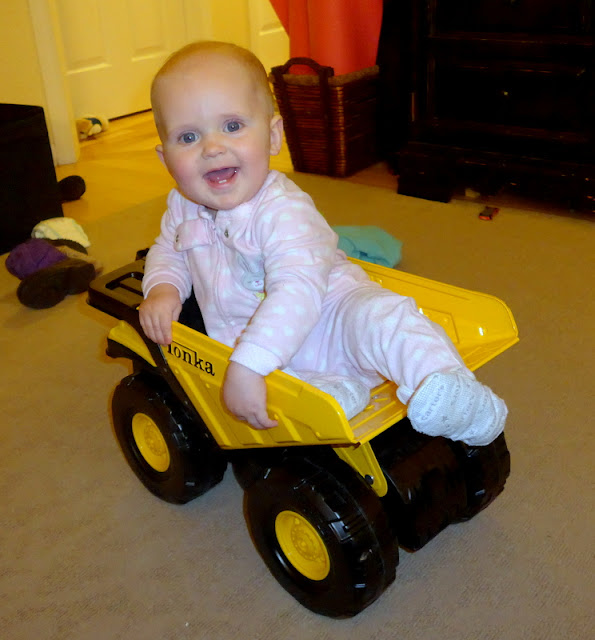 My mom reminded me of a story about a little girl in our ward in PoCo. She started praying for a cat one day and her mom gave her the same little speech, "You might want a cat, but I don't want a cat, so we're not getting a cat. You can't just pray for something and expect Heavenly Father to give it to you because that's not how prayer works."

Never underestimate the power of a child's prayer, though (as Sister Foley said Sister Gillespie once stated, "If you want a prayer to be answered, have a child ask") because one day a cat showed up on their doorstep.

Finally the little girl said, "Mommy, he won't go away because he's my cat! Heavenly Father sent him to me!"

And so the cat stayed (and became a well-loved family cat).

I guess sometimes (ofttimes) children know how prayer works better than adults do.
Posted by Nancy at 1:42 PM