The forecast calls for snow this weekend and so yesterday the city started panicking. It was 60°F outside and people were panicking—salting the roads and buying up bread and milk—because it's supposed to snow on Friday. Yes, people were panicking. Meanwhile, my little boy was crawling around—fully clothed—in the creek, pretending to be a beaver. 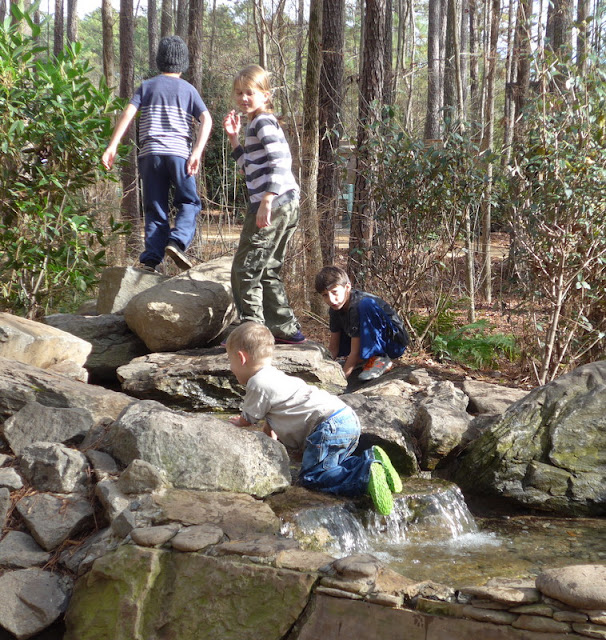 And a mighty fierce beaver he was, defending his lodge, building his dam(p), and slapping the water with his tail.

Fortunately, he wasn't the only little boy practically swimming in the creek—his little buddies Michael and Ollie were splashing about as well, thank goodness—otherwise I'd have been alone in accepting the scoffs and scorn of disproving passersby. Even more fortunately, I'd remembered to pack an extra set of clothes for Benjamin. And by extra set of clothes I mean just pants, so when it was time to leave he walked out of the museum wearing dry pants and a jacket zipped up over his bare chest in lieu of a shirt.

From the museum we headed to the library. I haven't attempted a (solo) trip to the museum in a long time because Benjamin'd been in a stage where he'd run off all the time and Zoë would spend her time pulling as many books off the shelf as possible. They've gotten older, though, as children do, and now I don't have to worry about Benjamin behaving demonically in public—because now only Zoë does that (but it's much easier to worry about one child acting up instead of two).

As soon as we got to the library, Benjamin disappeared into the stacks and reemerged split seconds later with a book about beavers (Beavers by Gail Gibbons).

"Can we please get this book?" he begged for some inexplicable reason (because how often do I ever say, "No, not that book," at the library? Uhhh, never...), "Because I was playing beavers today and I really like beavers and I want to learn all about beavers!"

I told him that we could get the book (of course) and then marvelled that he was able to find it so quickly. I wish I could say he knew the dewey decimal system by heart and therefore knew that he'd find a book about beavers in the 599s, but honestly he just stumbled upon it. Still, it was an impressive coincidence that he'd randomly grab a book about beavers off the shelf—within seconds of entering the library—on a day that he'd been playing beavers.

He went on so long about beavers that I was having a hard time maintaining my composure.

But at least I know what will interest him while we're dealing with all this (damp) snow...that may or may not arrive (but for which they're already cancelling stuff for).
Posted by Nancy at 8:07 PM