The kids were pretty excited to get back to their presents after church on Sunday! I didn't put any presents under the tree this year until Christmas Eve because of this little one: 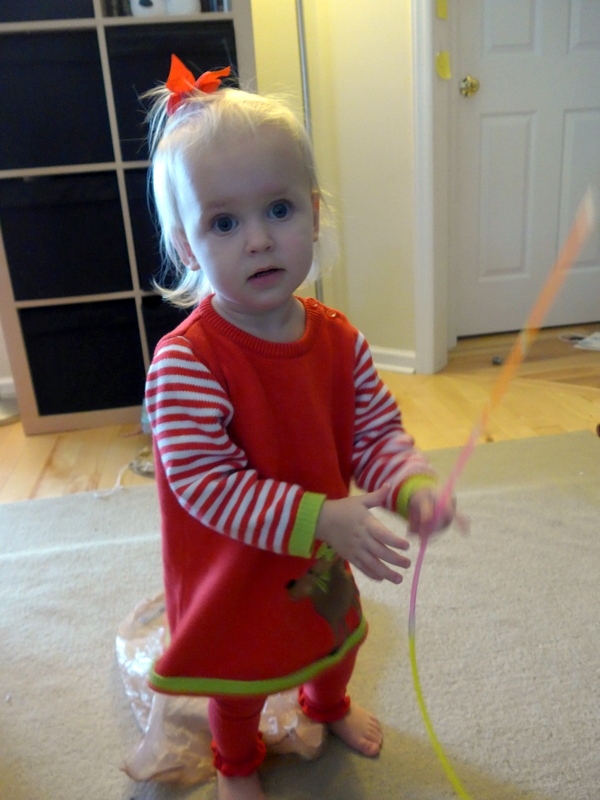 So as you can imagine it was rather exciting once there were presents. And then they had to wait all day long to open them! We were spoiled by so many people. We got presents from Naanii and Bumpa, Grandma and Grandpa, Uncle David, Auntie Sarah, our friend Crystal's family, and the next-door neighbour's dogs! Miriam made presents for everyone and Rachel found gifts for her siblings at Trading Tables. All in all, it was a great year for giving.

Here's Zoë opening a little doll from Naanii and Bumpa: 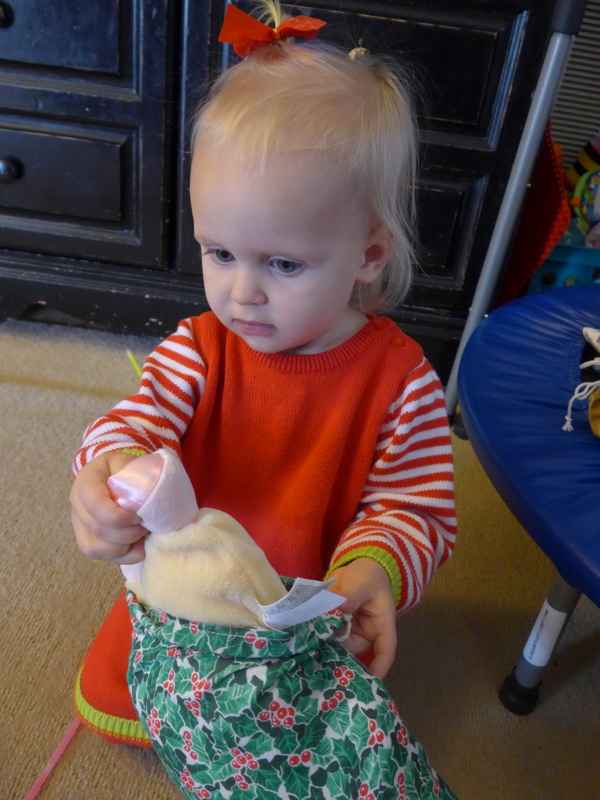 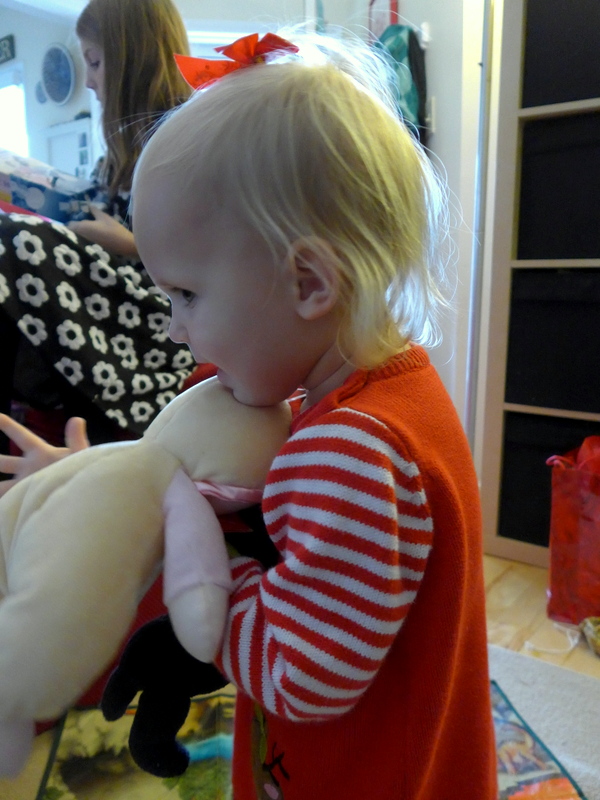 And here is Benjamin looking at some magnetic toys they sent for him—the perfect present for a little boy obsessed with magnets: 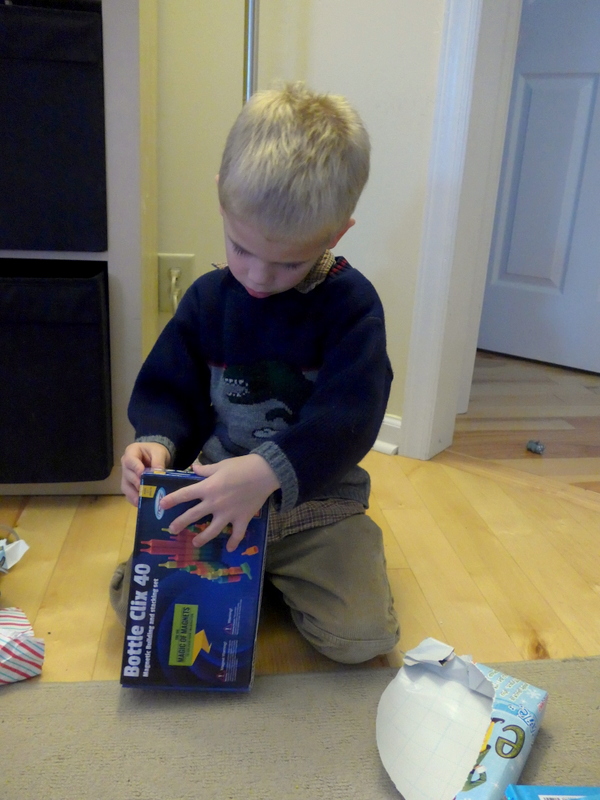 The girls were excited for the books and games my parents sent for us as well. Thank you!

Rachel burst out laughing when she opened this pair of pyjamas from Grandma and Grandpa: 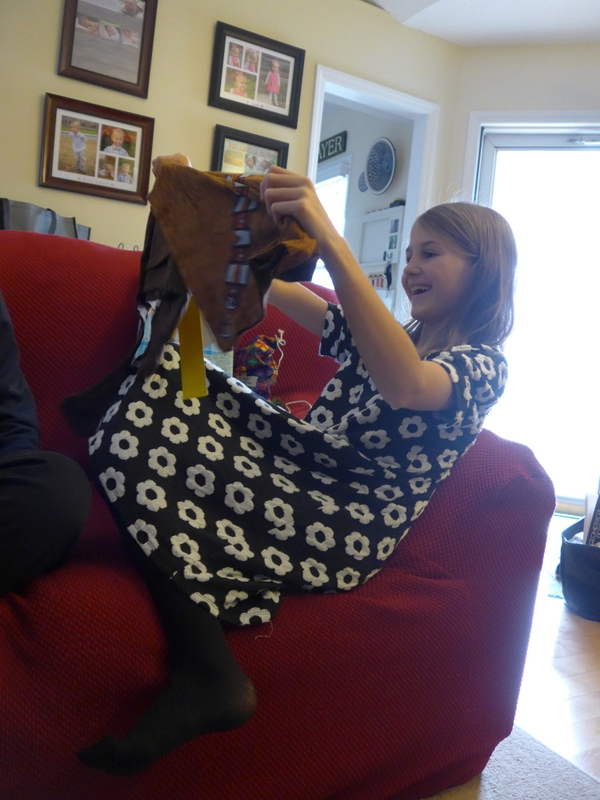 Benjamin and Zoë were thrilled with their pyjamas as well. Miriam was a little disappointed that she didn't also get Star Wars pyjamas. Hers were Finding Dory pyjamas, which she thought was too babyish. But we hadn't even seen Finding Dory yet! Andrew had watched it on one of the many flights he went on and assured her that it was very good and that she'd love it—and when we watched it as a family Christmas evening she found that she did love it (and can now wear her pyjamas with pride). Thanks for the new pyjamas!

Here's Zoë starting to get into Auntie Sarah's present: 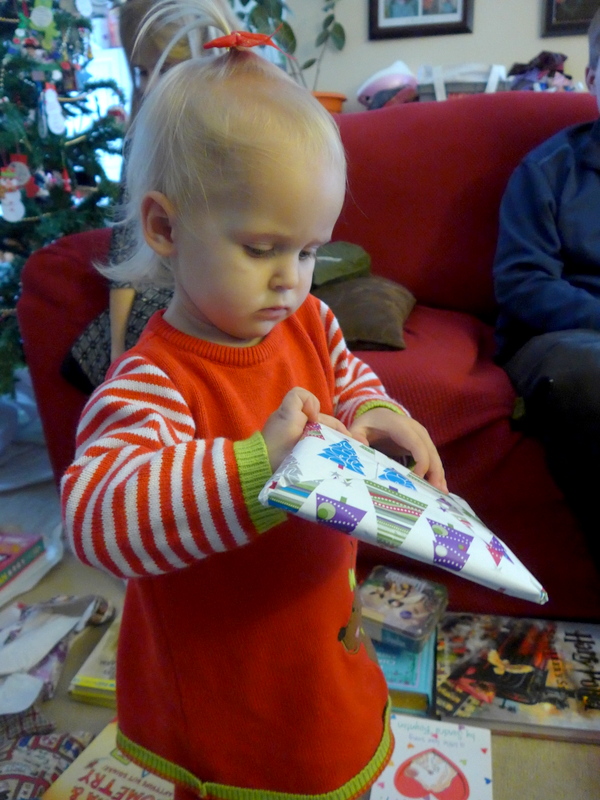 And here's Miriam unfurling her gift from Sarah: 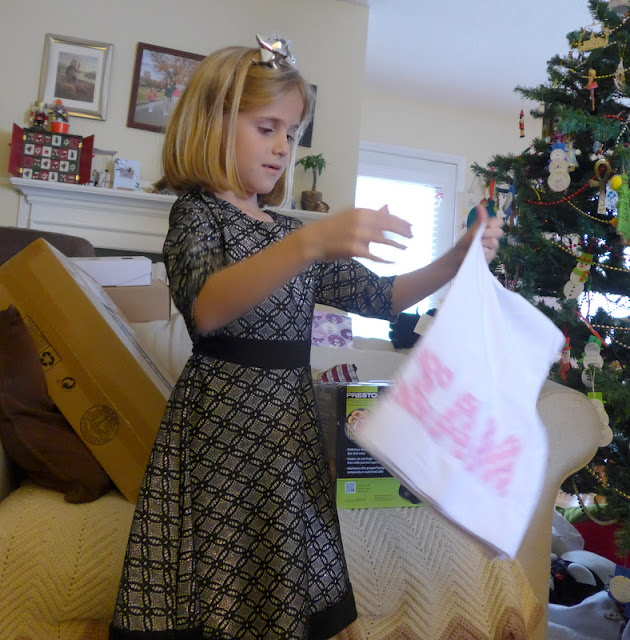 Sarah made personalized pillow cases for her nieces and nephews (all 18 of them (well, 17...plus one for Riley, her own little boy)), quite an undertaking! 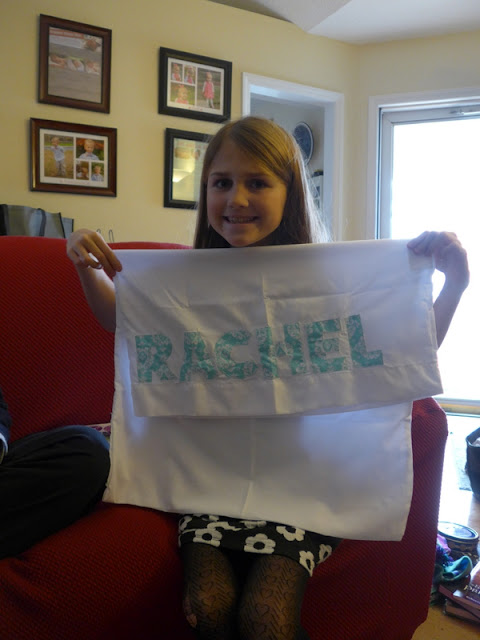 The kids were all quite excited about them (Rachel said, "Phew! It's not pink!" when she opened hers, but Zoë and Miriam were happy with their pink cases) and wanted to put them on their beds right away. They look great—thanks, Sarah! 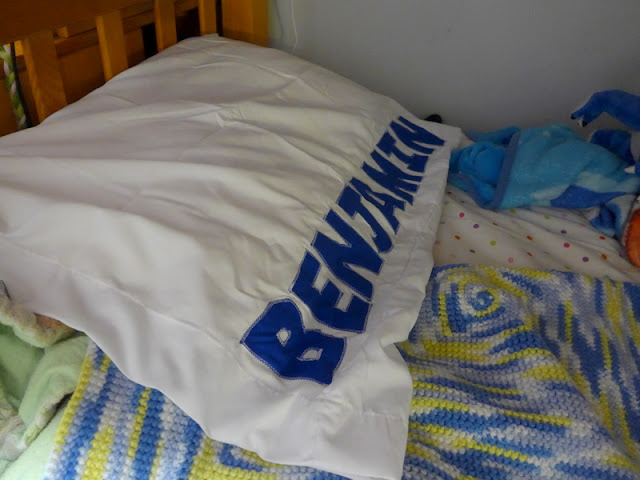 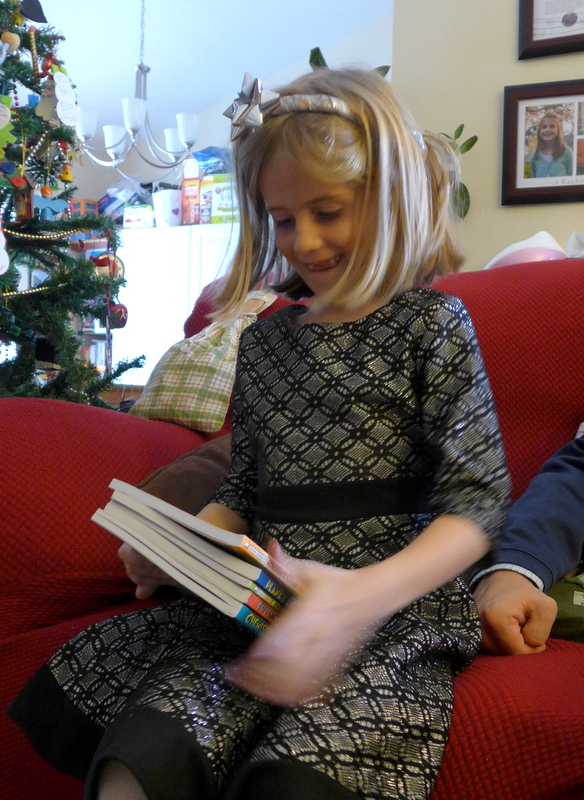 All the kids were happy about getting more Basher books for our home library, but Miriam was particularly excited about Extreme Physics. We also got a new Timeline game (which we played on New Years Eve) and a dice game (which we haven't tried yet). Thanks, David!

Here's Zoë opening her present from the neighbour's dogs: 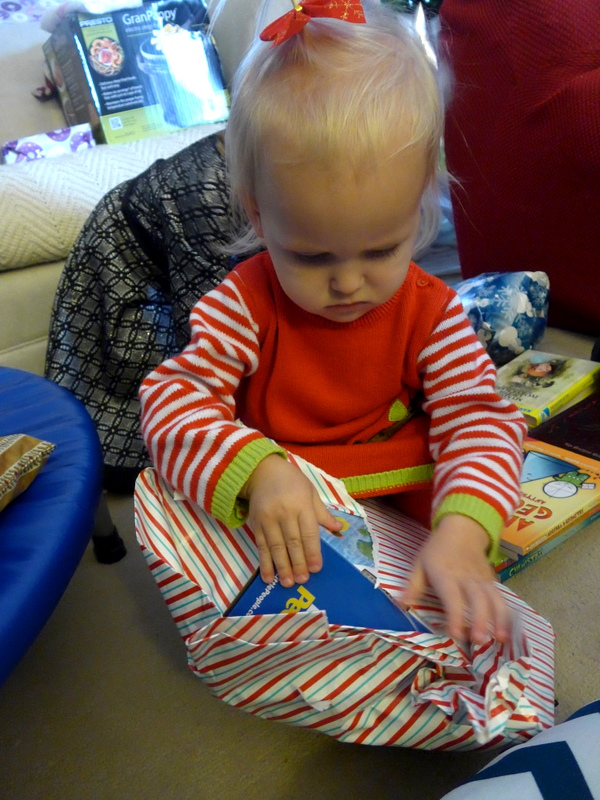 She got a little boat for the bathtub. Benjamin got a little budgie that sings (and that you can "teach" phrases to—the first thing he taught it was, of course, how to say, "Rachel is a butler."), Miriam got a terrarium kit, and Rachel got a copy of The Twelve Doctors of Christmas, a novelization of twelve Doctor Who Christmas specials. 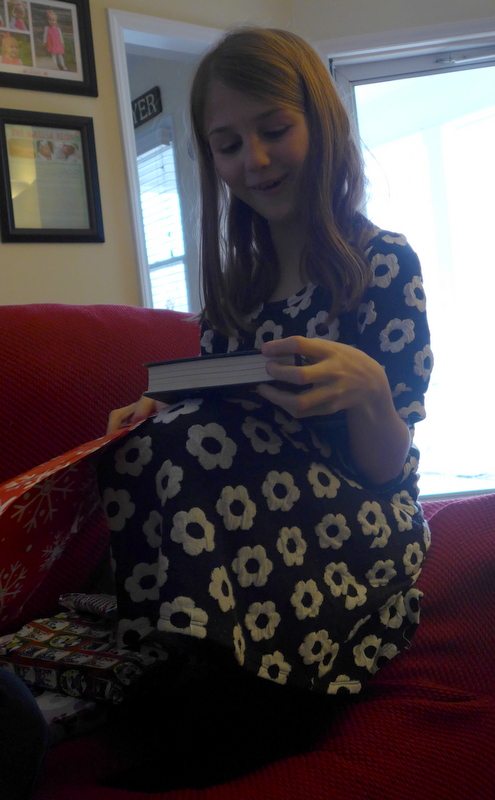 Miriam made scarves for Rachel and Benjamin (and herself). They turned out pretty cute: 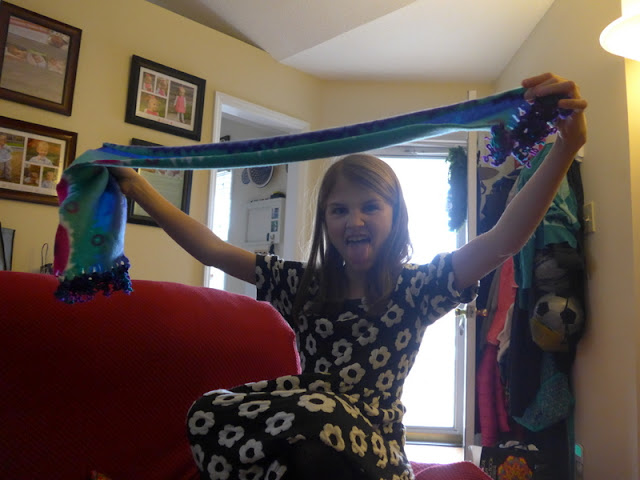 For Zoë she made a little doll out of...tape: 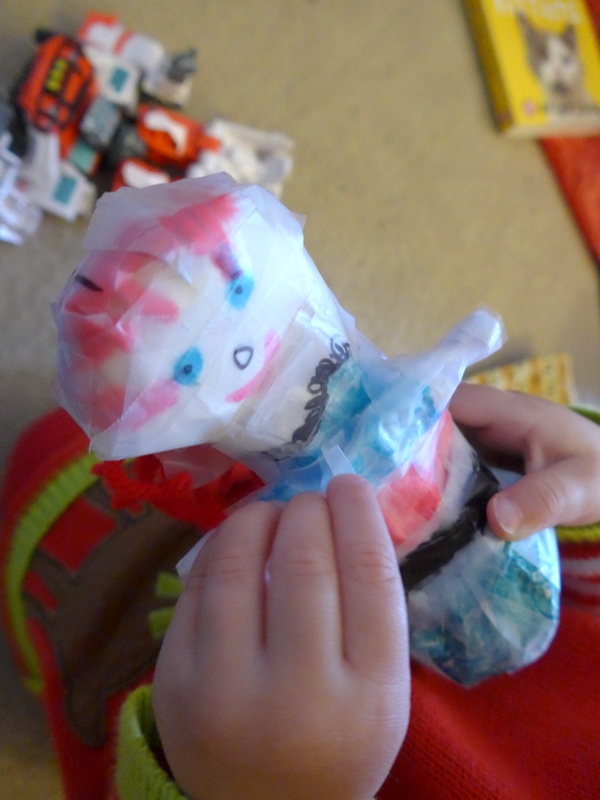 Technically it's toilet paper (and three pieces of Kleenex, I'm told) wrapped in masking tape and then in Scotch tape, decorated with yarn hair and various shades of permanent marker. It was quite the undertaking.

The kids were quite excited for this gift—an illustrated copy of Harry Potter: 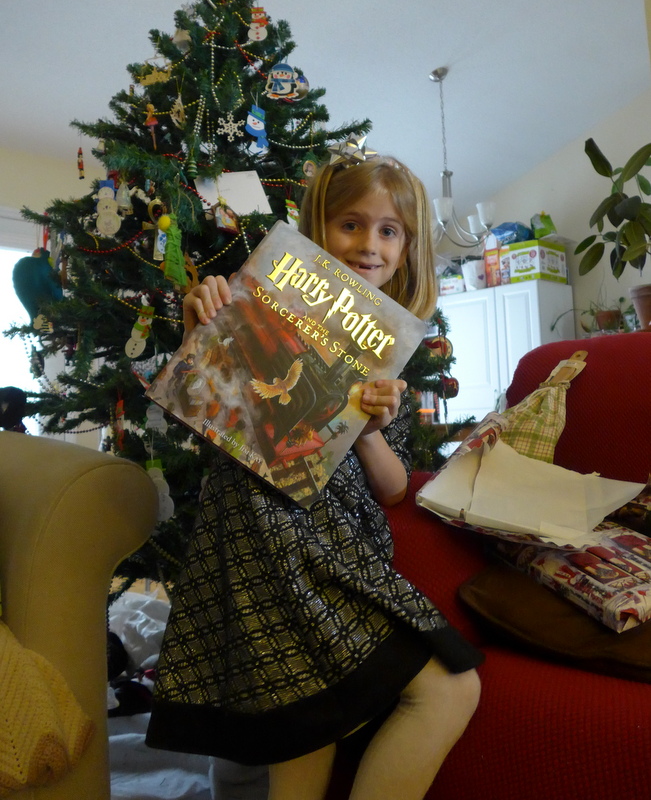 Apparently the second book is out, too, so we'll have to be on the lookout for that! I'm hoping it will hold Benjamin's attention better than our unillustrated copy. Lately his sisters have been reading various Magic Treehouse books to him, which they have all been enjoying. Magic Treehouse is below the girls' reading levels...but they still find the stories interesting...so they're using them to practice reading out loud.

After all our presents were open we had nap/quiet time (Zoë and I took a nap while the kids explored their gifts (prompting the cross-stitch outbreak)). After I woke up, Rachel and I took Zoë outside to play badminton in the backyard while Miriam and Andrew put together her model skeleton: 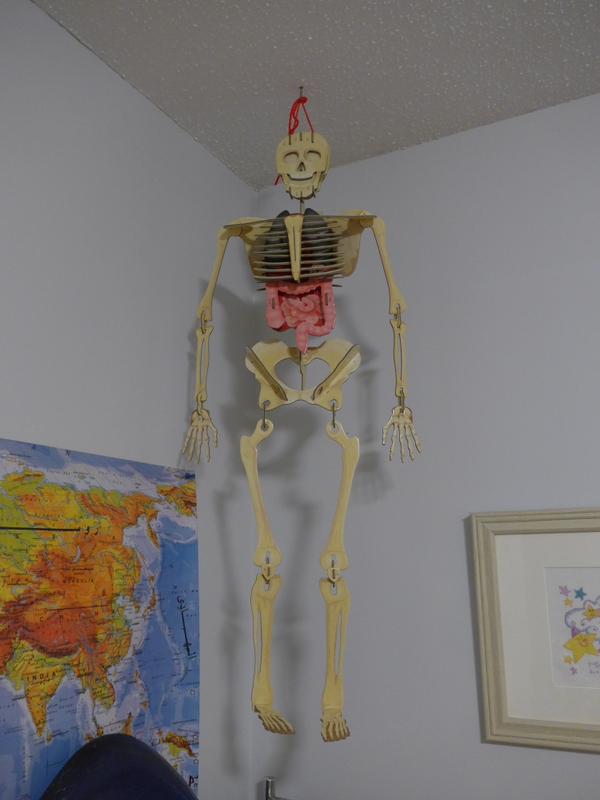 Benjamin agreed to take a nap in preparation for the evening's activities and when he woke up he played with his new toys for a while before joining the girls and me outside: 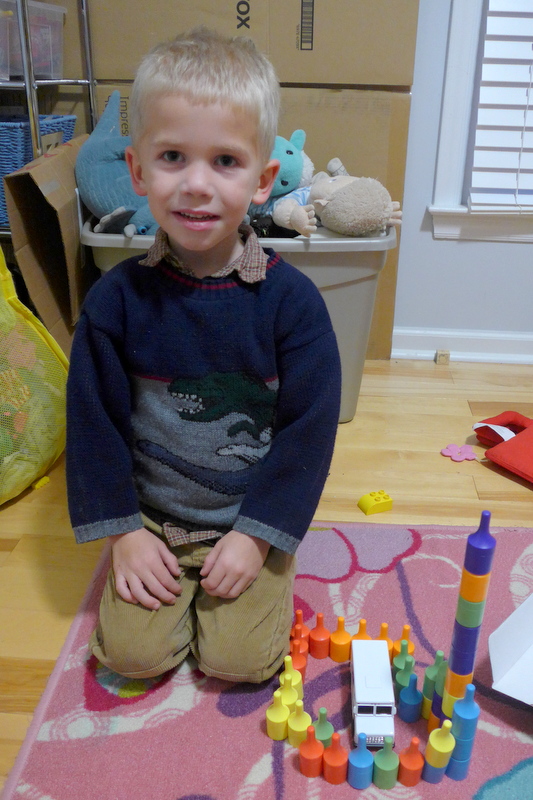 Our original plan for the day was to wake up, do presents from Santa, come home and quickly open our presents, have Andrew leave for a "meeting" and surprise the kids by bringing Auntie Josie home with him. The kids didn't suspect a thing because Andrew's always running off to church meetings (he's at a meeting right now, as a matter of fact). Unfortunately, Auntie Josie's plane was delayed, which meant she missed her connecting flight. The next flight they could put her on wasn't until the evening and then that flight was delayed for another hour...so she didn't end up arriving until well past bedtime.

Zoë was fast asleep and Benjamin had technically been put to bed as well (but hadn't fallen asleep yet), but the older girls were still waiting up for Andrew so that we could "play a Christmas game" or "watch a Christmas movie" or some other flimsy excuse. I suppose that's not a terrible excuse...except that we'd already played plenty of Christmas games and watched a Christmas movie; still the kids don't usually say no to being allowed to stay up late.

It was a fun surprise and we were happy to Auntie Josie stay with us for the week! 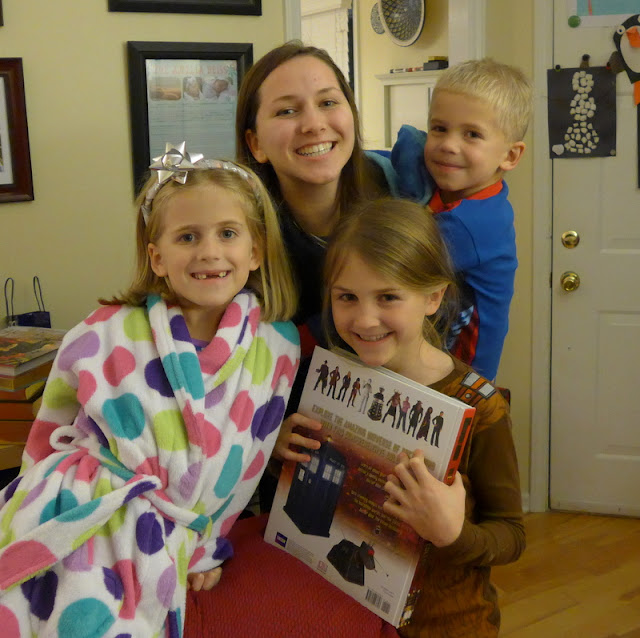