Snow Days in Carolina: A poem accompanied by way too many pictures

I hear the tinkle, tinkle
Of freshly falling snow
It's not composed of fluffy flakes
But ice pellets, you know.

Of course there'll be a snow day
(Or seven, eight, or nine)
While we wait, quite helpless,
For wintry-warm sunshine.

We rummage the entire house
For clothes to keep us hot,
Then run outside in rain boots—
The only sort we've got. 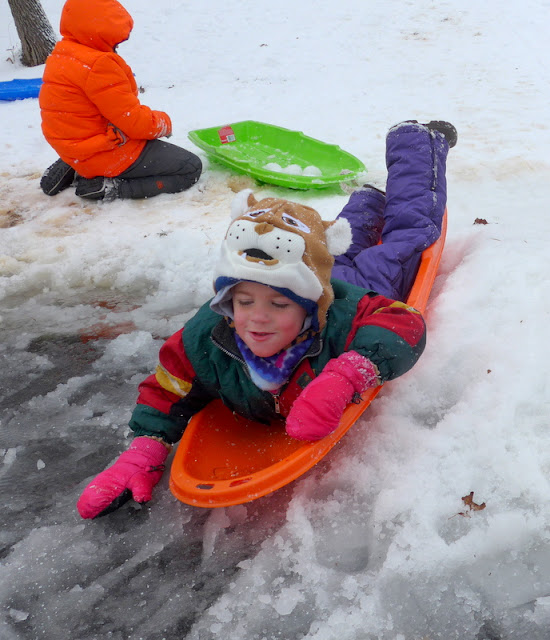 Our bottoms on toboggans
And toboggans on our tops,
We slip and slide down hillsides
'Til our parents make us stop 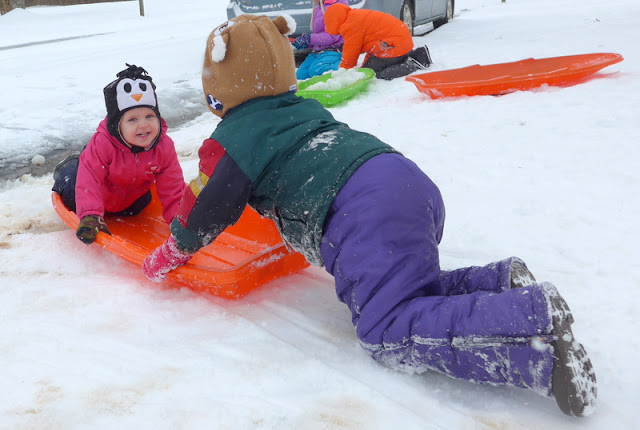 To come inside for dinner
(We've got bread and eggs and milk
So I guess we're having French toast
Or something of that ilk). 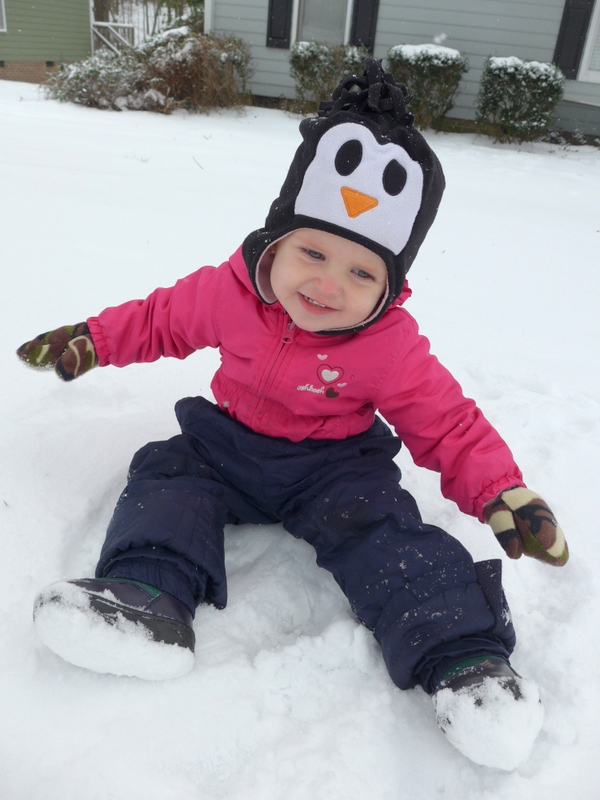 Back outside for round two!
Snow angels, men, and forts—
We only have a few short days
For playing winter sports. 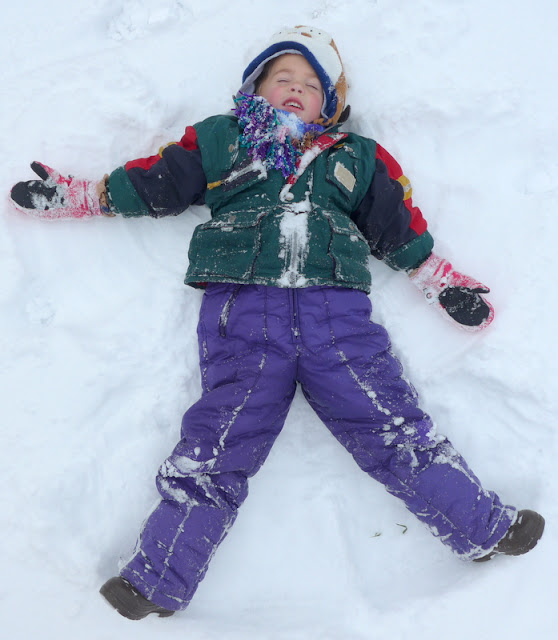 The sun will rise tomorrow,
And the ice will melt away.
We'll board the school bus wishing
For another snowy day. 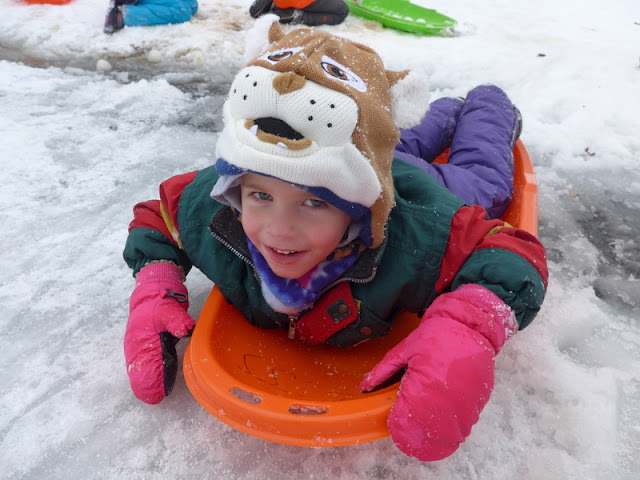 On Friday evening we headed to Miriam's friend Lily's baptism, which had been "pre-poned" due to the impending storm. It was already alternating between sleet and rain and snow that afternoon and evening, but the baptism was well-attended in spite of it all, and when we woke up in the morning we had a good three inches of accumulation—enough to send the city into a tailspin. 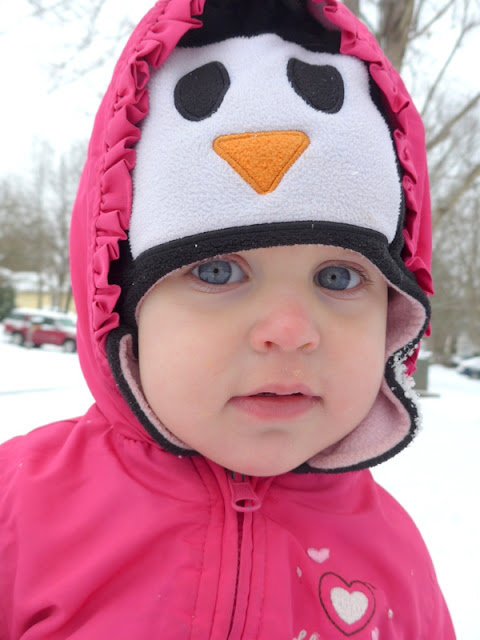 We bundled the kids up and broke up the sleds we'd collected—one from Trading Tables and two from Amazon (we broke one of the sleds we'd borrowed from our neighbours last January when we went up to the mountains for some sledding and had to replace that but could only find a three-pack on Amazon (we couldn't find any sleds in stores around here; we looked)). They had a blast outside! 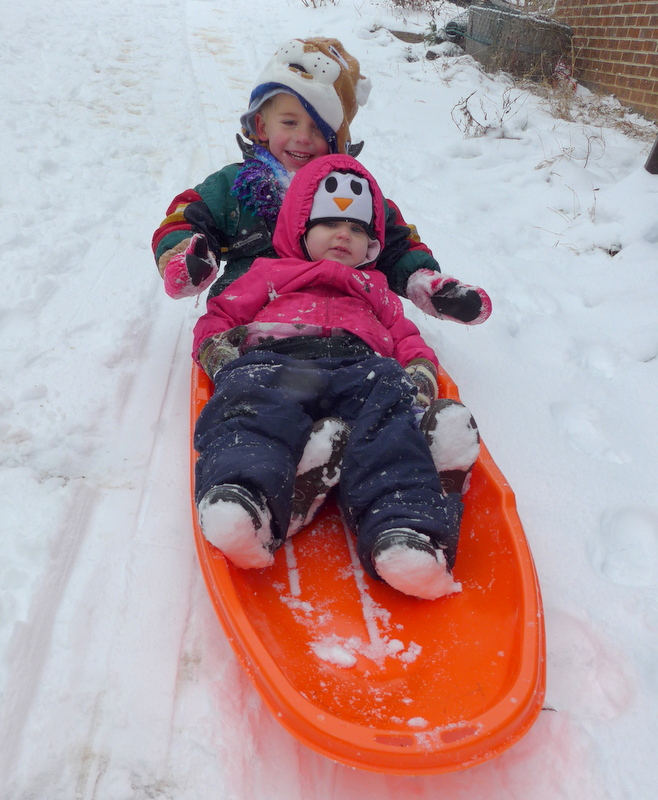 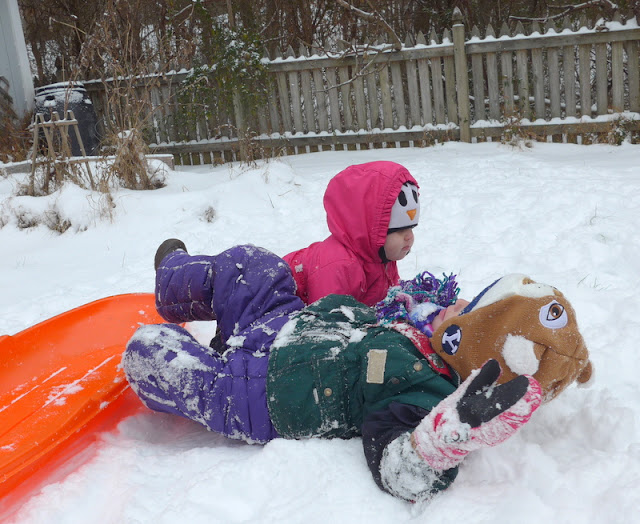 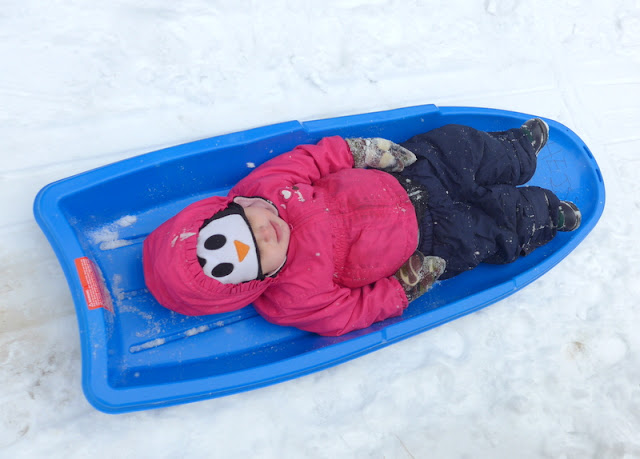 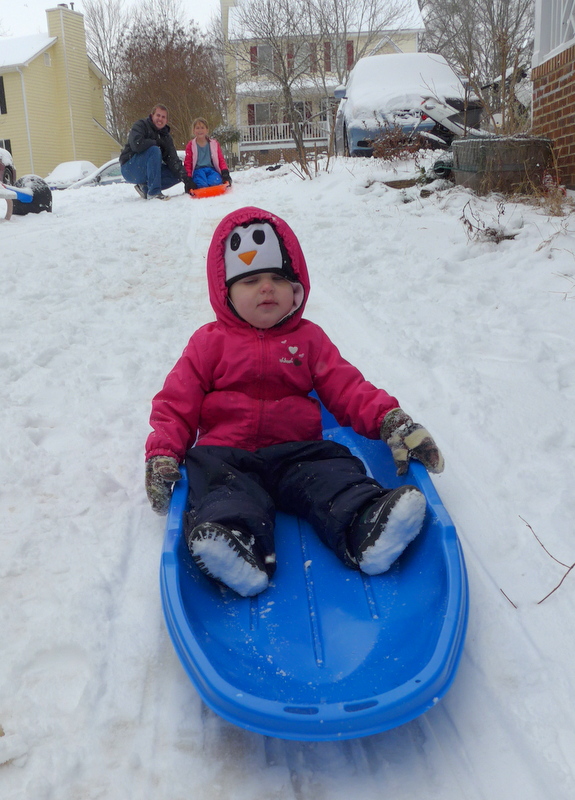 Most of my pictures are of Benjamin and Zoë, who need a little more assistance and supervision than Rachel and Miriam (who were off playing with older neighbourhood children). But eventually even those two came back home to play with us. 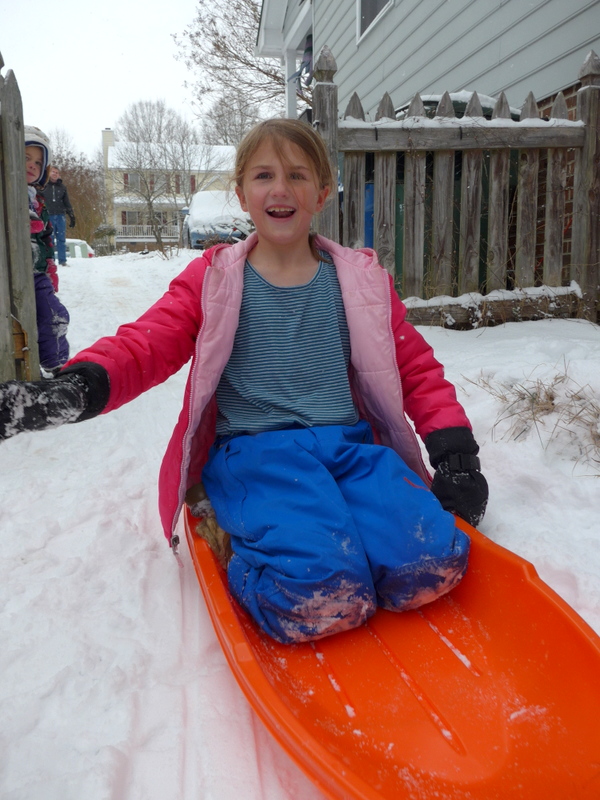 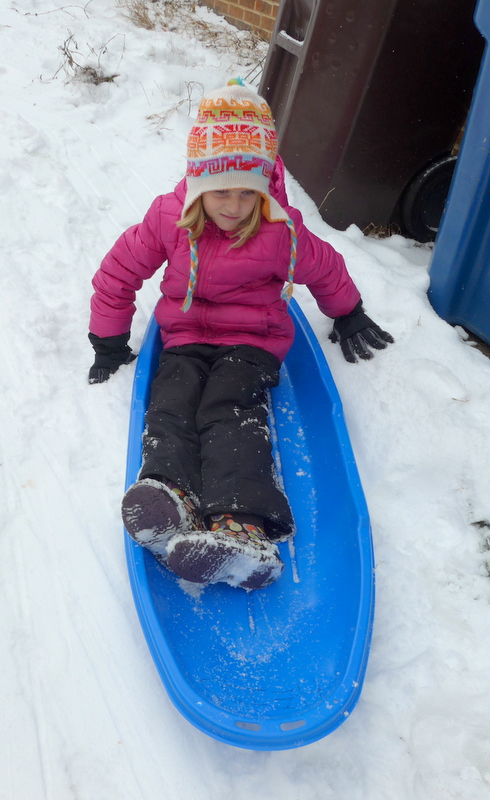 The blue sled hit a block of ice and shattered soon after this picture was taken, so we were down to two sleds (and two laundry baskets) for our second snow day. We decided to try out a hill down the street rather than the dangerous path through our gate... I think the hill is owned by the city...? It doesn't seem to be in anyone's yard...at least...not precisely. 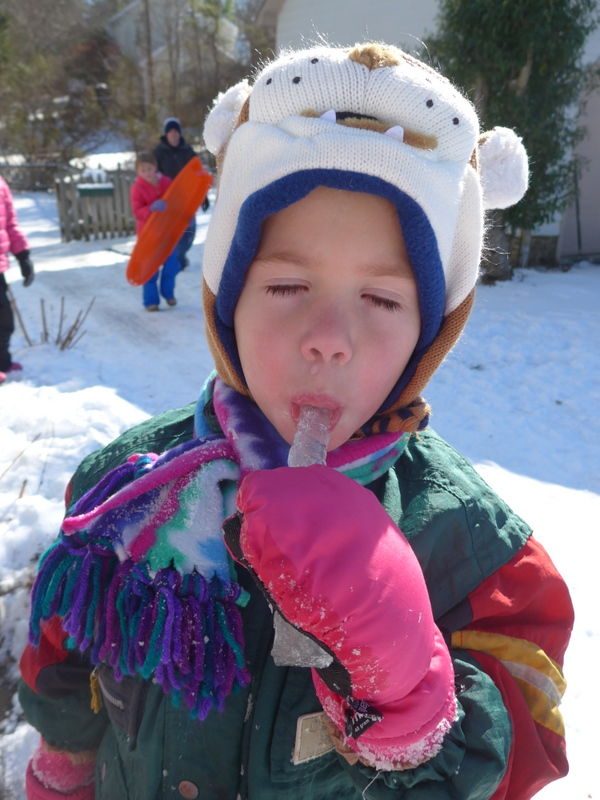 At any rate, the neighbour who lives in the house next to the hill came out to join us. He didn't seem upset that we were on the hill (that may or may not be his) and remarked he was glad to see someone besides himself finally making use of it. His yard is fenced off beside the hill and there's a big sewer pipe thing in the area, too. Maybe we should have just asked if it was his yard? I dunno. But he was super nice.

He brought out his snowboard and showed the kids some tricks. He also brought out a sled he and his dad had fashioned out of PVC pipe and an old shelf during some mega snow storm in South Carolina in the 1990s and let us take it down the hill a few times. It was a pretty cool sled.

Here's Zoë at the top of the hill: 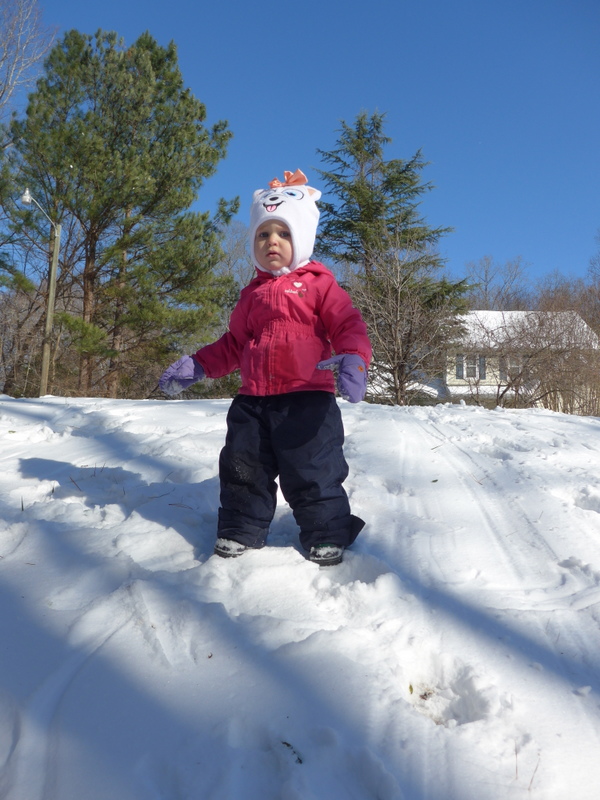 And here's Zoë and Miriam in their little twinner outfits: 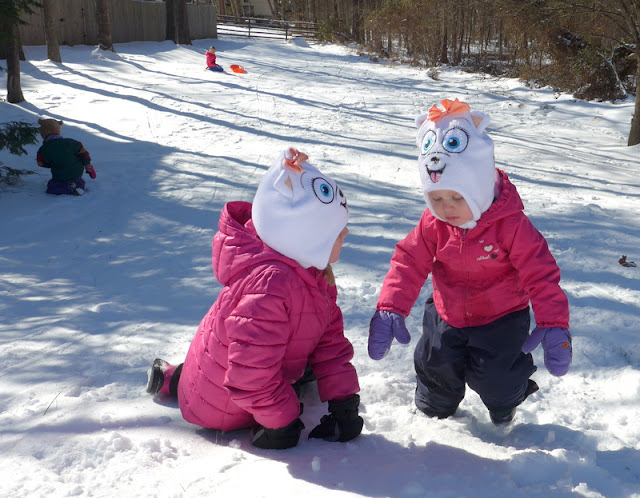 Here's Benjamin going down the hill on his own: 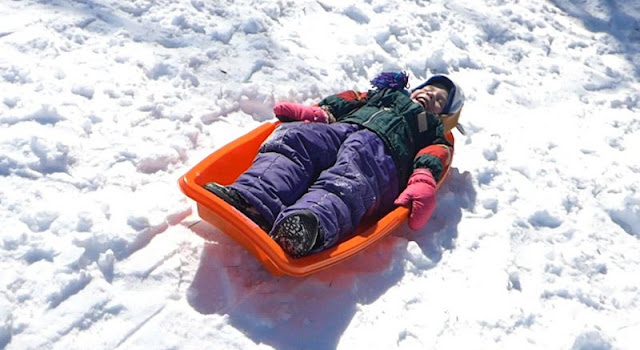 He was the one child to have a wipe-out that caused me to panic. A little tributary stream runs by the hill (Benjamin calls it the Mississippi River, but it's not (obviously)) and there are trees growing along it. Benjamin was really pretty good at either bailing out of the sled, stopping the sled, or steering the sled away from the trees so I stopped worrying about all the crazy ways he was coming up with to go down the hill. Everything was going great until the one time he didn't get out of the way of the tree!

He slammed into it and crumpled around it like a little rag doll. I dropped Zoë and ran down to him in a panic. Fortunately, he'd missed his head and caught the tree with his shoulder (and then folded around the tree). It was kind of awful-looking and he was howling like wild.

"Is she going to be alright?" our snowboarding neighbour asked as we hobbled up the hill together.

Yeah, well, he's dressed in hand-me-downs and with two older sisters (plus stuff from the three girls across the street) he doesn't really stand a chance, does he? At least not when it comes to winter gear. We simply don't spend a lot of time or energy finding decent winter gear for our kids because we simply don't need it that often. We're going to be back in the 50s by Thursday.

Here's Zoë after she took a little tumble out of a laundry basket: 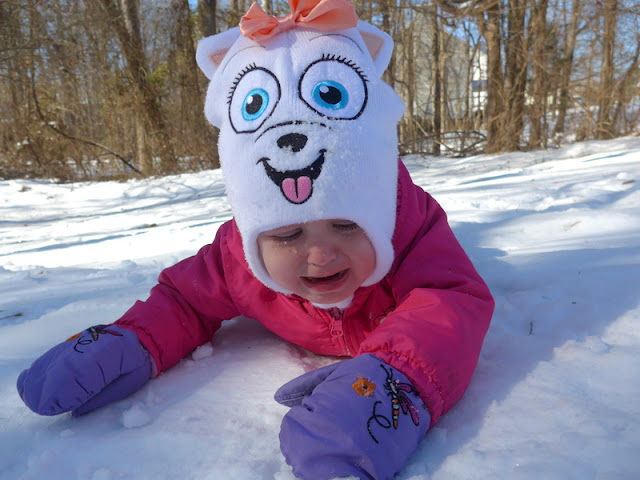 Here are the three big kids riding down the Daddy-toboggan: 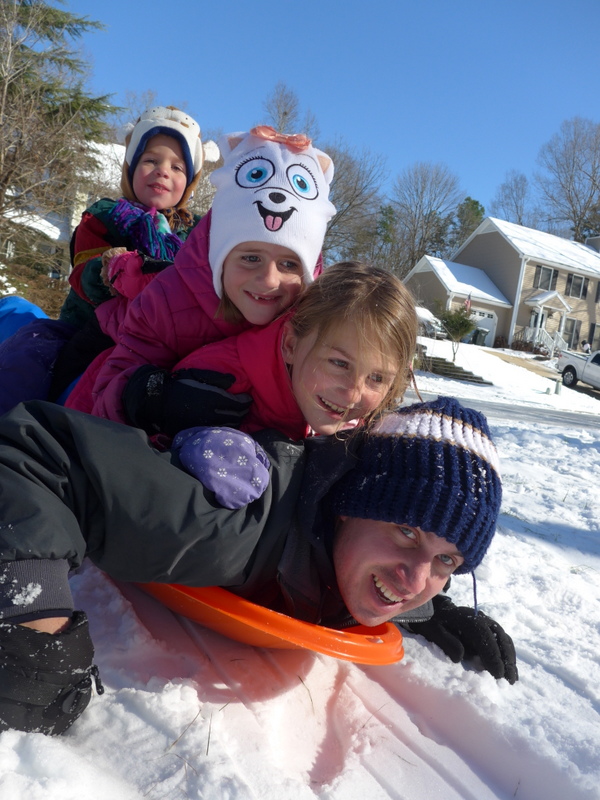 Here's Benjamin and Zoë heading down together: 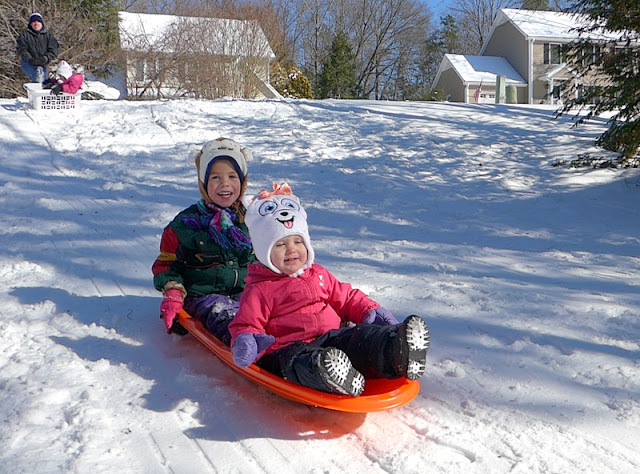 Here's Benjamin trying out the "snow shredder" (that was the name painted on the bottom of this): 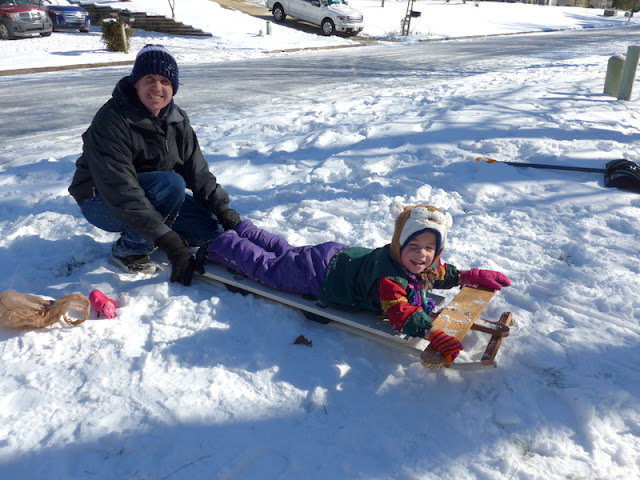 And pulling it back up the hill: 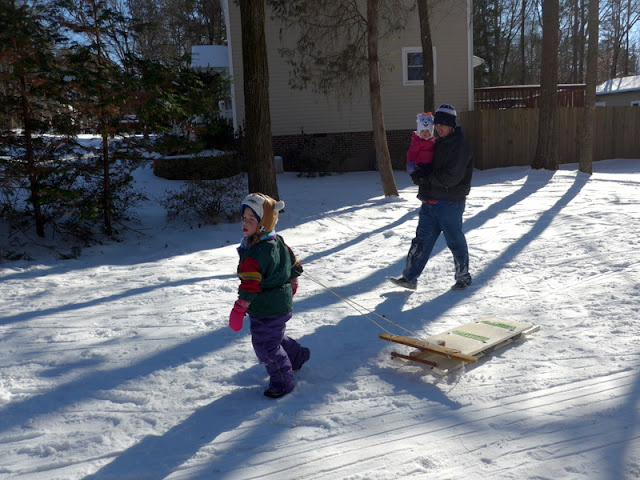 I can't remember what happened here... 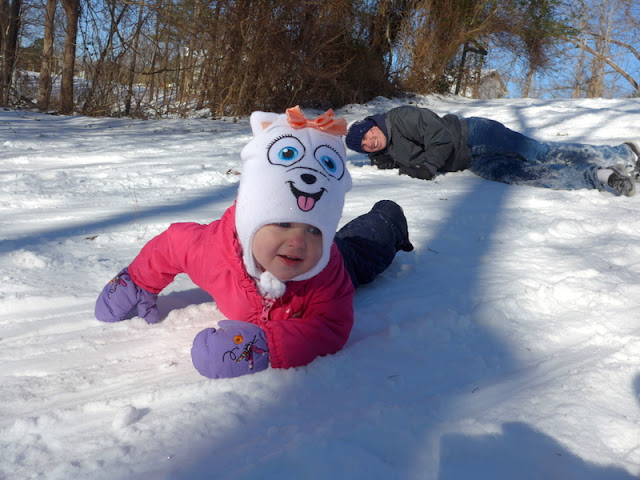 Zoë was enjoying scooching down the hill on her belly, but what's Andrew doing?

And here I am going down on the neighbour's sled: 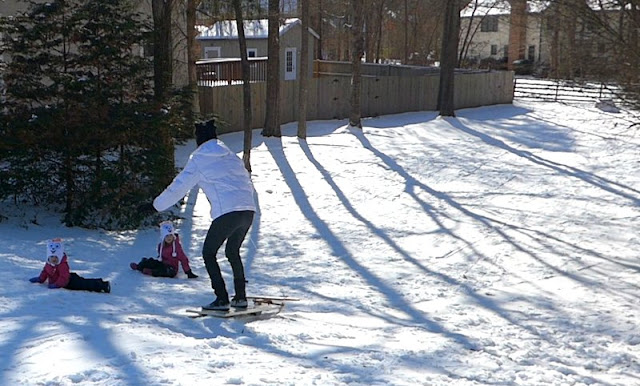 There were little grippy parts to put your feet so you wouldn't slip off, kind of like snowboarding...not that I've ever been snowboarding, but having done this I can see how snowboarding might be fun.

We had home-church today, since everything was cancelled, so we watched Joseph Smith: The Prophet of the Restoration before we headed outside to enjoy the snow a little bit. We'll probably be out enjoying the snow tomorrow as well because school has been cancelled. The kids have been on school break for three weeks already, so what's one more day, right?

(Probably two more days...and half of Wednesday. At the very least. We may not be back in school until Thursday.)
Posted by Nancy at 11:45 PM