Don't throw your trash in my backyard...

This weekend the kids and I participated in our second annual litter collection event, in honour of MLK day. As you can see from the pictures the turnout has been phenomenal (or not): 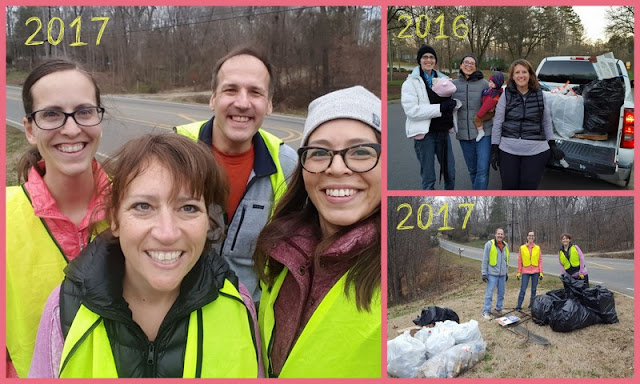 Last year we had three moms show up and with an assortment of children (mostly mine (okay, they were all mine except for Crystal's baby)) we managed to collect 10 bags of trash and recycling (yes, we even sorted it). This year we had the same three moms, a different assortment of children (mostly mine again (except Miriam had cheer so she wasn't there) and Crystal brought an older child and left her baby at home) and one man. We collected 6 bags of trash and 7 bags of recycling.

Obviously the children are missing from these pictures (they'd escaped to the park by this time) but they were really excellent helpers.

We went through a more official channel this year. If you work with the Keep Durham Beautiful initiative they will lend you safety vests and garbage-grabber-things and will even come out to pick up your piles of trash, which is awesome. My kids were most excited about the colour-changing cups they sent along as a thank you.

When we standing around marvelling about how much garbage gets tossed on the side of the road, I mentioned how unfortunate it is that there's no deposit on beverage containers. With seven bags full of bottles and cans we would have made bank!

I mentioned how my brother and I were always pillaging for pop cans at construction sites so we could turn them into the bottle depot—we'd get five cents per can! Double for beer cans! Two-litre bottles were even more!

One of the moms is from Massachusetts and she nodded in agreement. The amount of cans on the side of the road was astonishing. She said it's something her family remarks on when they come down to visit because you just don't see it up in Massachusetts—because if a can is worth five cents you don't just toss it out the window (or if you do toss it out the window someone will come along and happily pick it up for you because five cents).

"They really ought to incentivize bottle recycling," I sighed.

Various sources online tell me that "litter cleanup costs the United States upwards of $11.5 billion annually, with businesses paying $9.1 billion of that." Durham alone spends 15 million dollars a year on litter. Do you know what we could do with that money if we weren't throwing it away?

There are currently only 10 states with "bottle bills" to nudge people to clean up after themselves. They require a deposit to be made when buying beverages and then you get the money back when you return the cans.

Apparently you turn them into a grocery store (that sells that brand of can you would like to return), which I find totally weird because I have (not-so) fond memories of sorting out cans in sticky, muggy, swarming-with-wasps bottle depot centres, putting the 5-cent cans on this conveyor belt, putting the 10-cent cans on that conveyor belt, and so on, and then leaving with my pockets bursting with cash and my head reeling from the stench of alcohol.

Can collecting was really a great source of income for kids in our family because we didn't buy pop all that often so we weren't even the ones paying the deposit. We were just cashing in on the returns.

Americans buy a lot of pop—a mind-boggling 5-10% of America's grocery budget goes to sugary drinks—so a beverage container deposit could make a huge impact if bottle bills were to catch on around the country.

It's amazing to me that they haven't because every province and territory of Canada (except Nunavut—and they're new, so they have an excuse (no pressure, Nunavut (just kidding—get with it, Nunavut)) and Manitoba, which only has a deposit on beer cans so their return rates for other cans is pretty abysmal (get with it, Manitoba)) has some sort of bottle deposit and, what's more, they're incredibly effective, yielding a 70–100% return rate (depending on the kind of container being tracked)!

Such a measure seems perfectly reasonable to me, but I also grew up using a quarter to borrow a shopping cart from the grocery store. And, wouldn't you know it, our parking lots aren't littered with stray carts because people actually put them away (they want their quarter back, naturally).

The same is true with pop cans, apparently.

The programs are clearly pretty effective in the states that have "bottle bills" so why haven't other states adopted similar measures?

Even if you don't care about the environment and think climate change is hogwash, surely you care about the billions of dollars being wasted on recovering the billions of cans on the side of the road annually (since half of what we collected were beverage containers and since it's estimated that 51 billion pieces of litter end up on the side of our highways annually, I'm kind of guessing on the number of cans here, but it's a pretty confident guess).

So where do we go from here? How do we get more bottle bills passed in this country?

Because, uh, even if you don't want to return that soda can for a nickel...I want to do it for you.
Posted by Nancy at 12:07 AM