Late Wednesday afternoon we got the news that the girls would be having a full day of school on Thursday morning. I had them pack up their backpacks so we'd be prepared in the morning. Andrew and Rachel went to church in the evening for a meeting and an activity, respectively. I stayed home with the littles, as per my usual, and gave Miriam her piano lesson.

We'd had scriptures and prayer before Andrew and Rachel left, with the hope that I'd have the other kids in bed by the time they returned—and we were right on track for that. We'd cleaned up from dinner and had story time and everything! And then Miriam got out of bed to announce that she'd forgotten to do her "Sunshine Math," an extracurricular math program (that seems to be rather widely used in the States...I dunno).

I was like, "You've had this worksheet sitting in your backpack for over three weeks and now is when you decide to do it?!"

Seriously. She'd been at home for twenty-six days in a row—and there had been several outbursts of "I'm bored!"—and she was just sitting on this worksheet the whole time?! Kids!

The girls were happy to be back at school for a couple of days before our long weekend (because, yes, that's just what we need after being home for twenty-six days and going back to school for two days—a long weekend). It's probably a good thing, really, because we need to reenter our schedule slowly. This 7:45 AM start time. Boy. I dunno.

In other news, Zoë, who suffered somewhat of a sleep regression over our month-long break (meaning she doesn't just go to bed when she's put down anymore...and has stopped napping pretty much altogether...in addition to still not sleeping through the night...but that's fine), fell asleep with a soother in her mouth tonight! 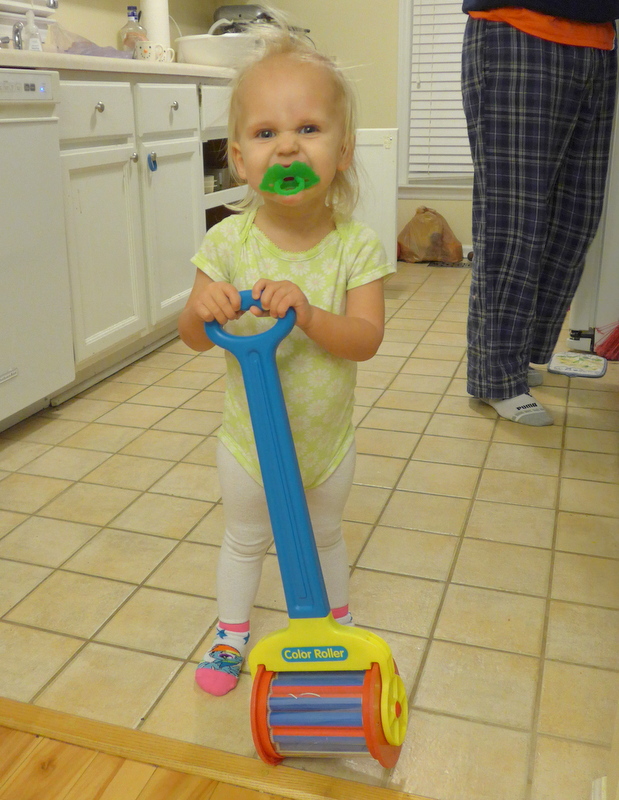 She's such a tricky person to feed. Some days she'll eat almost anything and other days she will eat one thing. I can always get her to eat yogurt or baby cereal, so we try to have those on hand, and she enjoys other foods...I just never know what she's going to enjoy.

For example, one day all she'd eat was cucumbers. But for the next several days she refused to eat them. She's eaten them again since then but yesterday, for example, she wouldn't eat them again. She chewed one up and then spat it out, then bit another one before she threw it at me, yelling, "EW!" But she didn't actually eat any, which is odd because some days she loves them.

Berries have been a good price lately, so I've spent all week offering her blueberries and blackberries. Her siblings have been gobbling them up at every meal, gushing about what a delicious treat they are. But Zoë was not interested in eating them. She bit a few and spat them out. She'd hold whole blueberries in her mouth and then machine-gun them out completely intact. It's so weird because she likes fruit, typically.

I gave her grapefruit the other day and she was all over that, even though I said, "I don't think you'll like this. It's so sour!"

But not the blueberries. Blueberries are offensive.

And avocados! She used to love those! She'd eat them sliced, mashed, mixed. But I haven't been able to get her to touch them for a couple of months, at least...until last night when all she ate for dinner were berries and avocado!

The rest of us had biscuit sandwiches (with eggs, bacon, tomatoes, and avocado as toppings (innards?)) but all Zoë wanted was avocado and berries. The blueberries weren't her favourite (though she ate a ton of them); it was blackberries that really won her heart (she ate most of them). Everything else we offered her was chewed up, spat out, and sent overboard (along with her plate).

Here she is finishing off her berries: 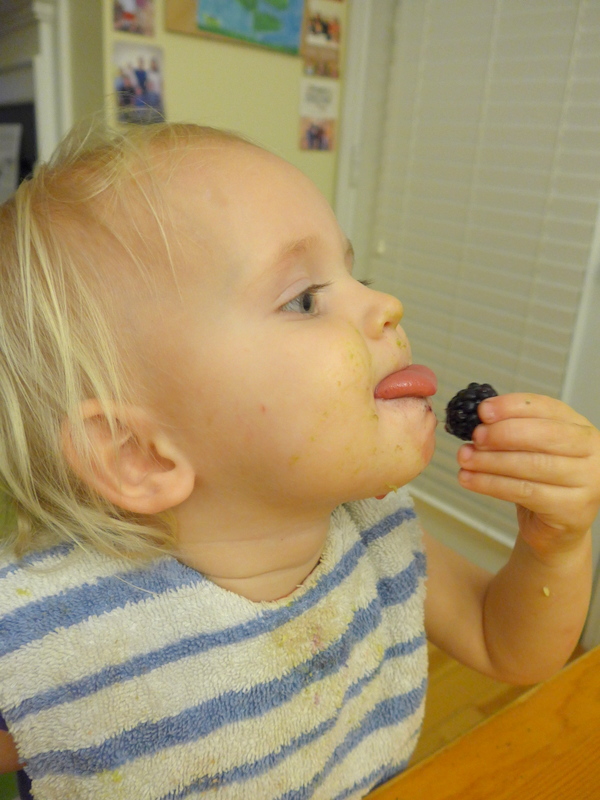 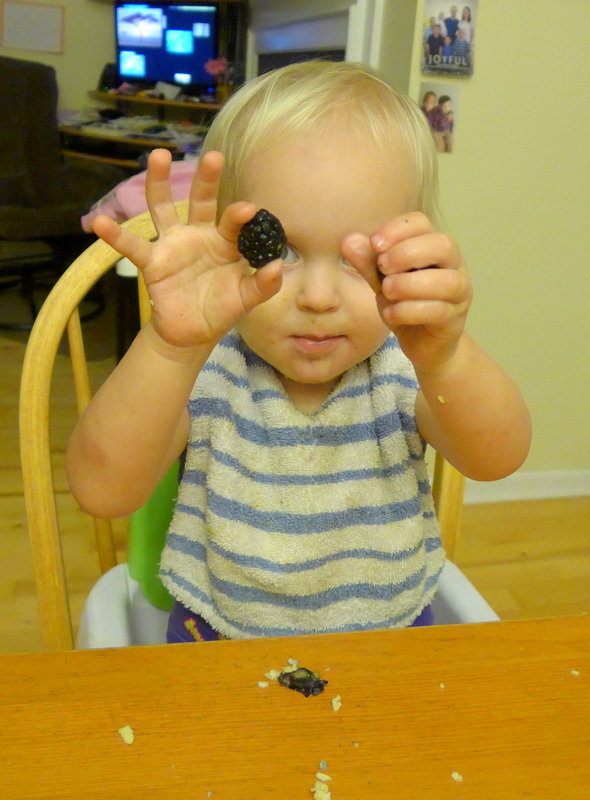 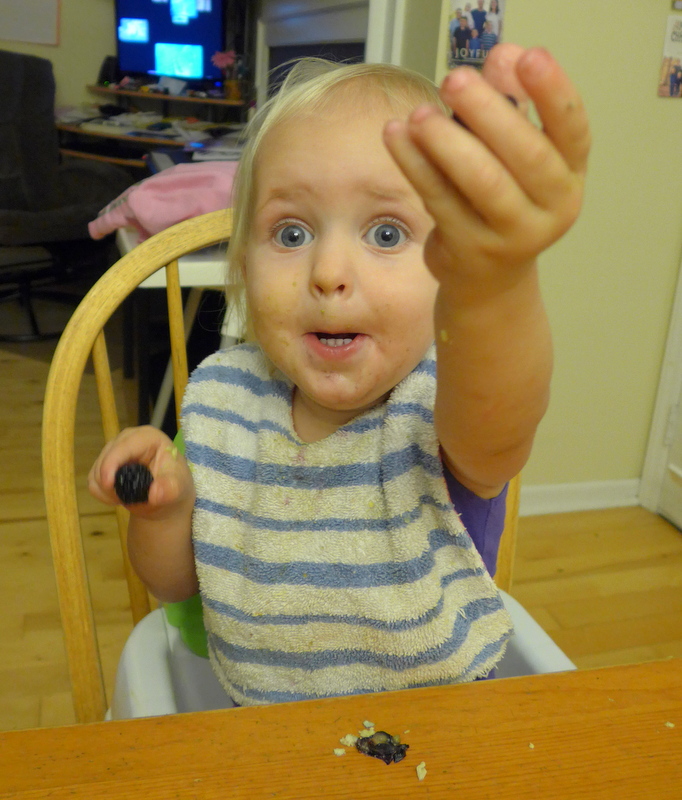 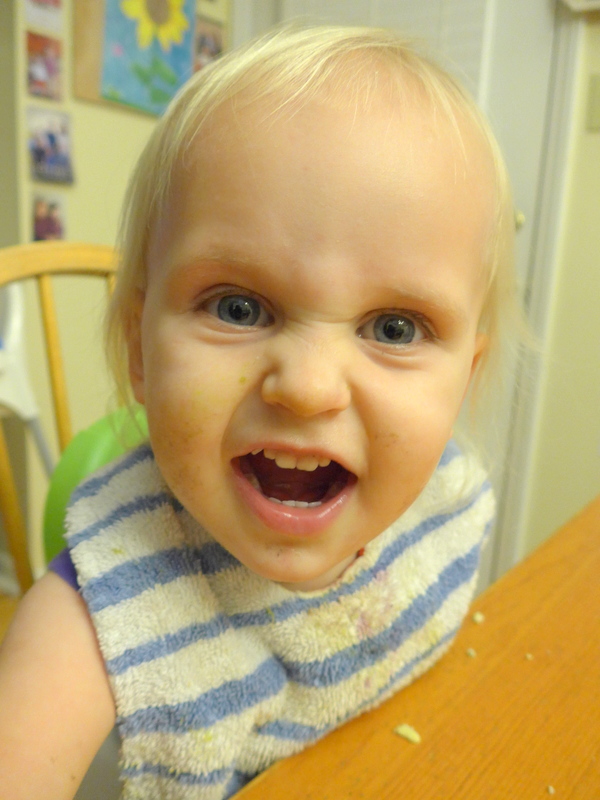