We tried to cobble together a snowman of sorts yesterday, but our results were rather sad. How sad? 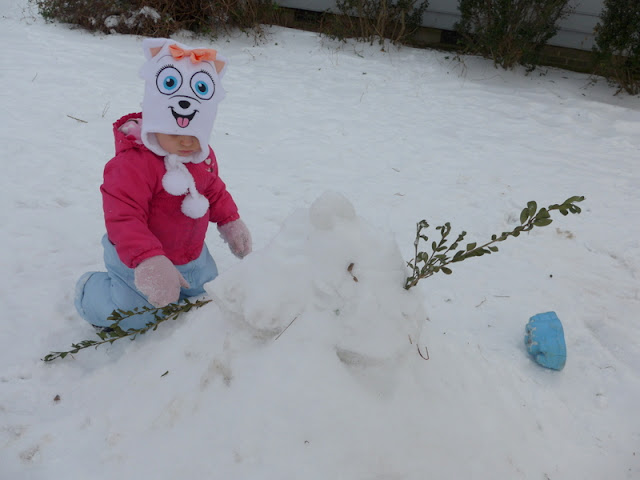 No one stayed interested in the snowman for long. The big kids went off to do some more sledding and Zoë and I went back inside to get warm. 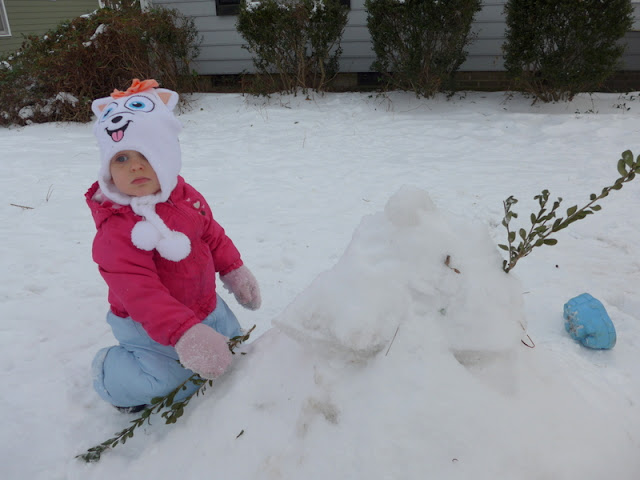 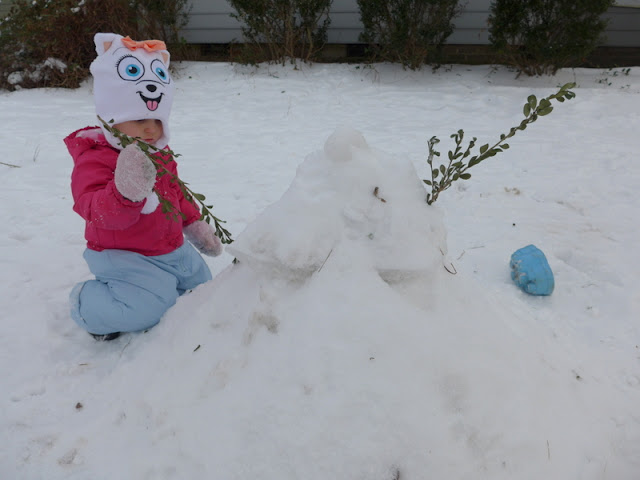 We should have tried to build a snowman today—some friends of ours managed to build some great ones—but I had a hard time coaxing the children outside. They spent the day turning their bedroom into a museum and baking cookies (all on their own). We watched a couple Fuller House episodes together and then I announced that we were going to go for a walk.

Getting ready to go outside when it's above freezing is a lot simpler than getting ready to go outside when it's below freezing, that's for sure. After spending so much time bundling and unbundling the past few days, leaving the house this afternoon was a breeze! I'm so glad we only have to deal with all the winter stuff for a few days/weeks because I don't know what I'd do if we had to do it for months at a time!

Turns out, the farther south you head the less you need to worry about that.

Still, there are times when I wish we had a proper entry way. Like yesterday... 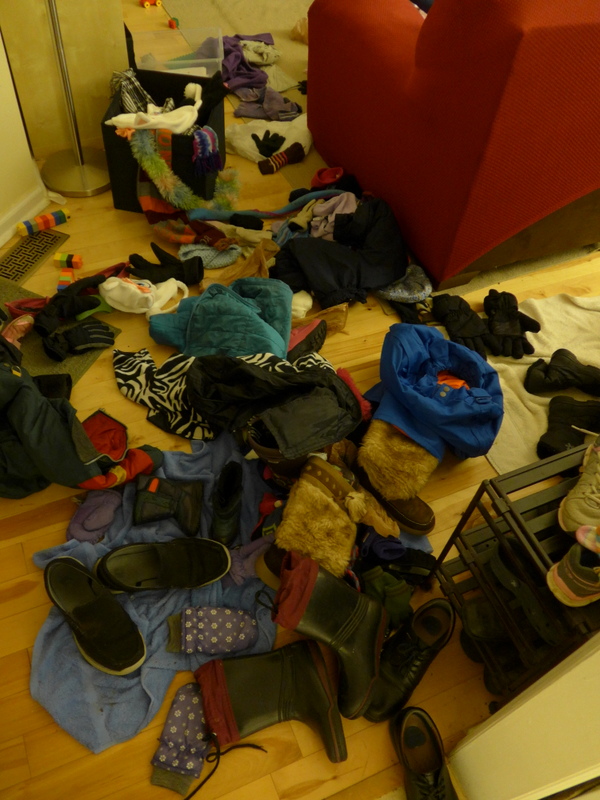 We hardly used half of that stuff today! It was so nice and warm out! 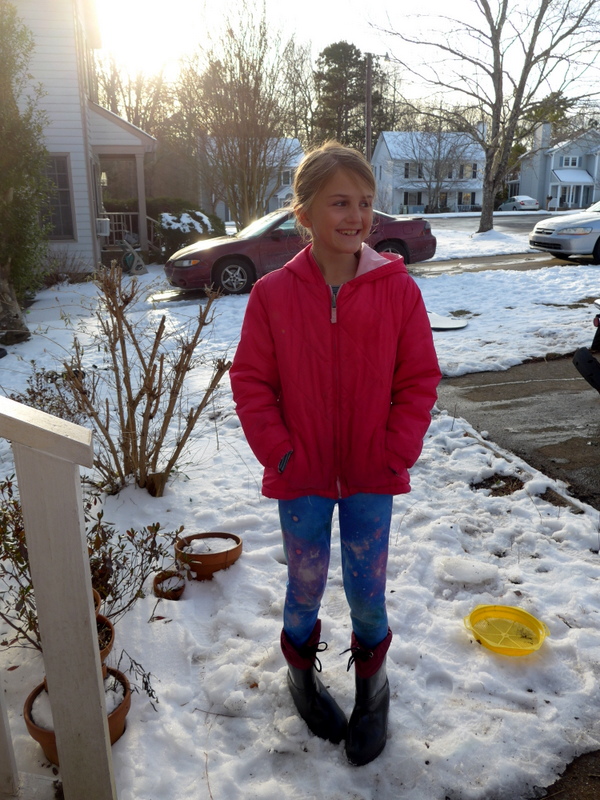 Though the sun shone its darndest we'll be having another snow day tomorrow (that's #3 for us). 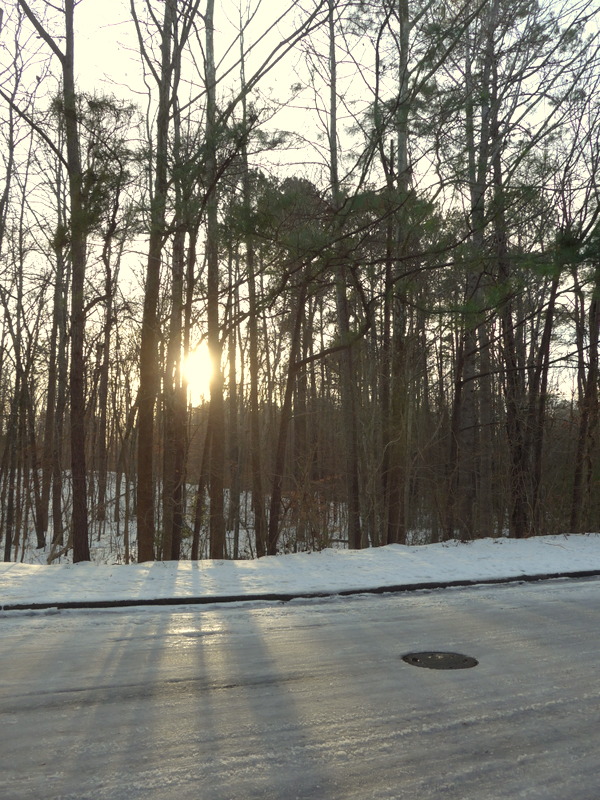 The roads are still too hazardous. 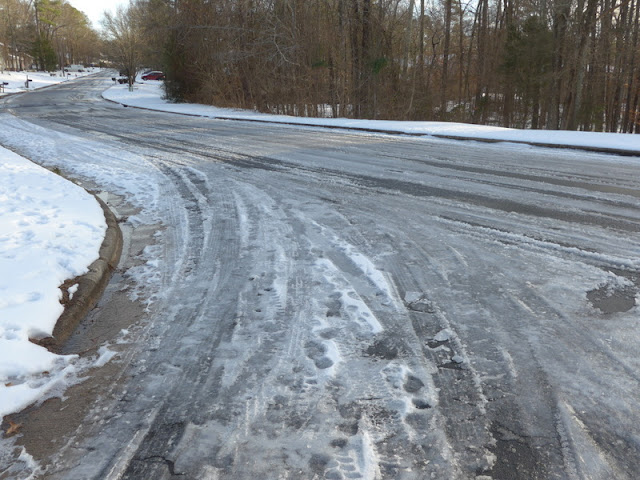 Don't laugh, my dear Canadian readers (Abra, I'm looking at you), or I'll invoke the storm of January 19, 2005, an event, mind you, "with as many sociological implications as meteorological" (this is my favourite analysis of that storm).

We haven't had plows come through our neighbourhood yet—not that plows are any match for ice, to quote from Orem's snow removal plan, once "ice has formed, the only thing we can do is remove the new snow accumulation, apply salt, and wait for mother nature to help melt the ice"—but I finally learned how many plows Durham has: 22 (plus they hire contractors).

I've looked for that number in years past but for some reason had never been able to find it...I don't think...unless I did.

Orem has 15, but Durham is quite a bit bigger than Orem, I'll give you that.

Durham has 723 miles of paved road, Orem lists 529 lane miles, but only 241 center-line miles, which I think is what Durham is listing in their chart. That means that each truck in Durham has to cover about 33 miles of snow-covered roads, while in Orem each truck only has to cover 16 miles of snowy roads. So Orem has, essentially, twice the plow-power as Durham. But they also have to contend with storm systems that last for days, which is an added complication.

This storm came in on Friday night and it had stopped snowing by Saturday afternoon. And we're still "snowed in." But that's fine. My kids have been out of school for 3.5 weeks now so it's not like I was even looking forward to (our rapidly dwindling) spring break, anyway.

I'm, like, okay with missing this much school for this storm and I've already taken the first few days of spring break off my calendar so I won't mourn it when it gets here (but then isn't actually here). But, so help me, if the kids miss Thursday as well. I'd have to scream or something. So be listening for that.

And it's not like this is the only storm that's going to happen this winter. I'm sure mother nature's got another one waiting for us, which will mean more snow days that we'll have to make up later. *sigh*

When we first got married (and even now, if we're being honest), whenever I did anything to make money (like, you know, work full-time to support Andrew while he was in school (but whatever)) Andrew would say, "Alright! Free money!"

And I would always be like, "It's not free! I worked for that!"

And that's kind of how I feel about snow days.

Everyone's like, "Yes! Snow day! Free time! What a gift!" And I'm over here like, "Every stitch you stitch on Sunday comes out your nose in heaven," because I'm pretty sure we're going to be feeling it when we have to make all these days up. But that doesn't mean I'm not enjoying the time with my kids. Because I am.

We've been enjoying ourselves with sledding, movies, stories, cookies, hot chocolate, cuddles, sleep-ins, and so forth.

Today was, literally, a walk in the park. 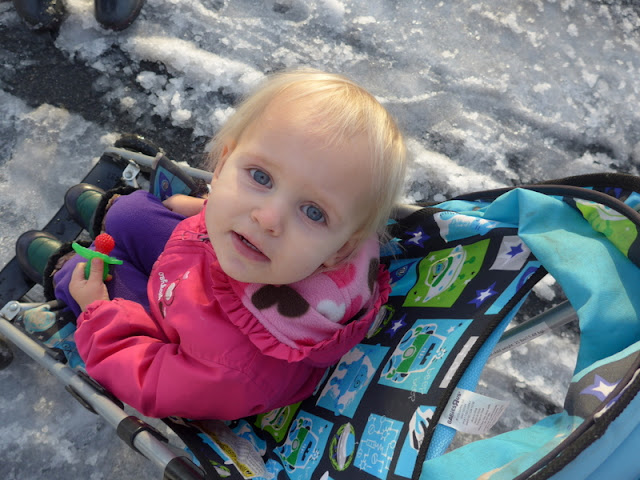 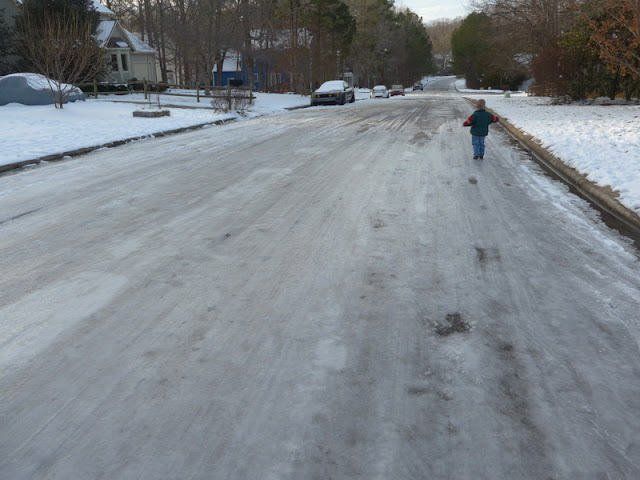 Once there we had an impromptu, and mittenless, snowball fight. Here's Zoë telling me about how she got snow on her hands: 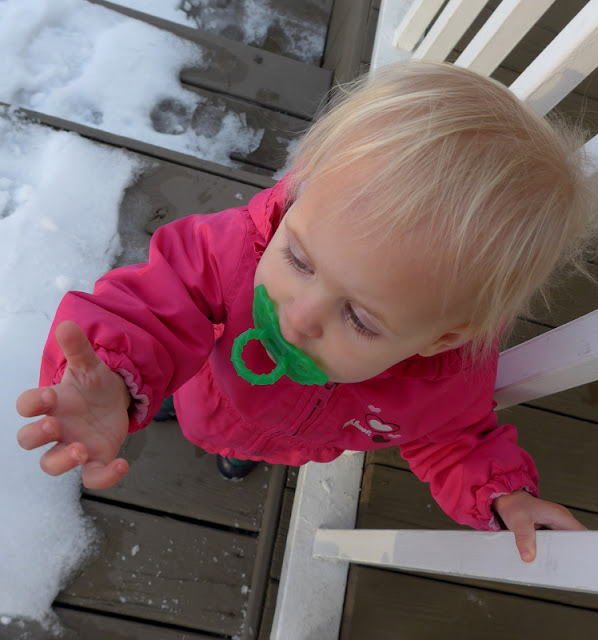 We emptied the toy box a few days ago so we could sort through it and put all the random accumulation in their proper places (which my kids didn't categorize as an enjoyable snow day activity for some reason). I, for one, was quite happy to find Zoë's missing running shoe! It'd been sorely missed—for weeks. Fortunately it's been so warm that she was able to live in her sandals for the last part of December and then when it did get cold it got so cold that she was able to wear boots so she still didn't need her shoes. Once this snow melts, though, I'd probably start missing it again.

We also found a bunch of soothers.

Anyway, Zoë picked one up, stuck it in her mouth and sucked on it for the rest of the day.

Sure, she's at the age where normal people are trying to take soothers away from their kids, but when have we ever been categorized as normal people. This baby likes to suck a lot (trust me) and so if she wants to suck on a soother, I say let her at it (because sometimes I get tired of being her soother—she is 20 months old, after all). My first thought, truthfully, was "Maybe she'll take a soother to bed!"

It's kind of funny to see her wandering around with a soother in her mouth, hearing the little "squeak, squeak, squeak," as she happily sucks away. She's such a fussy baby. I have a hunch that she should have been a pacifier/thumb-sucking child her whole life but just never realized it until now. Sucking brings her so much joy. I don't know how long this stage will last but for now we've all been enjoying having her little scream-hole plugged up. 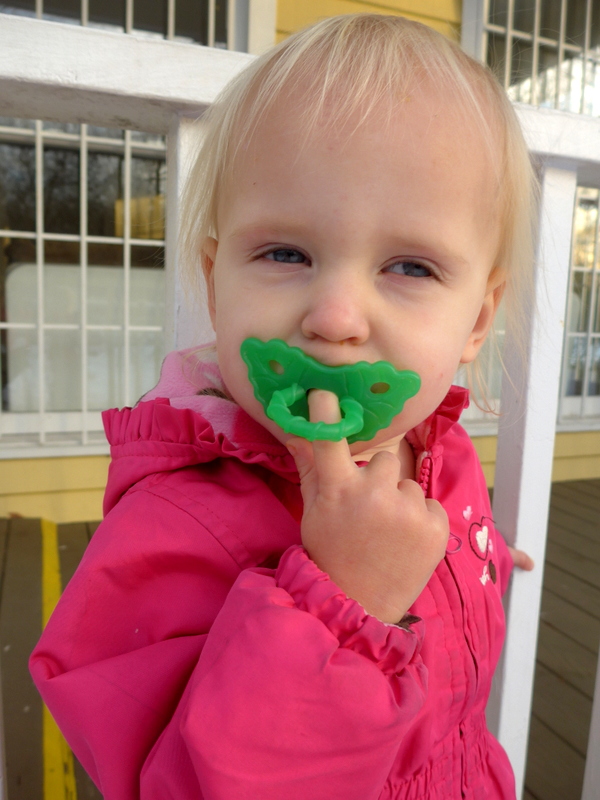 Benjamin was the most excited about our little snowball fight, though they all got into it.

Here's Rachel unaware that a snowball fight was beginning: 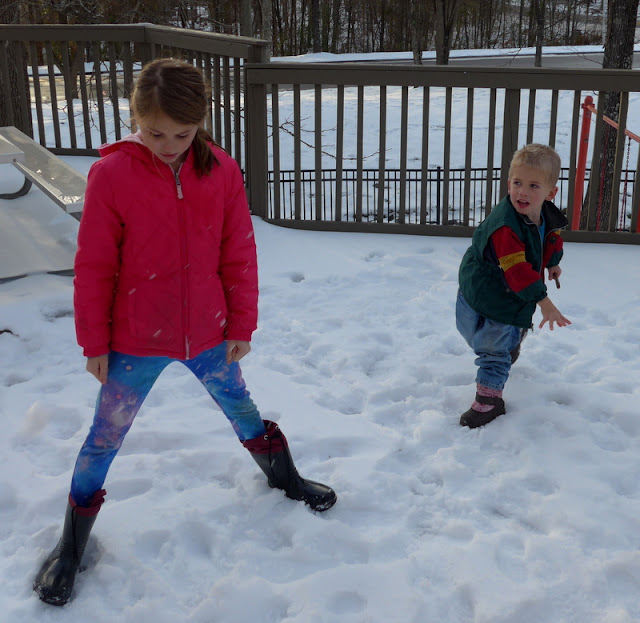 And here she is feeling all too aware: 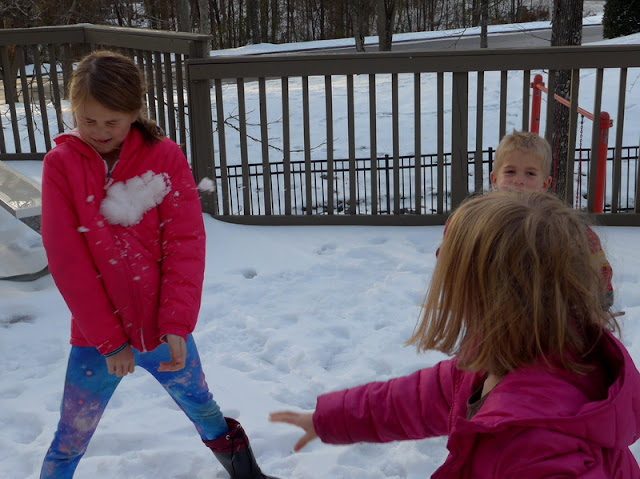 And here are three happy kids: 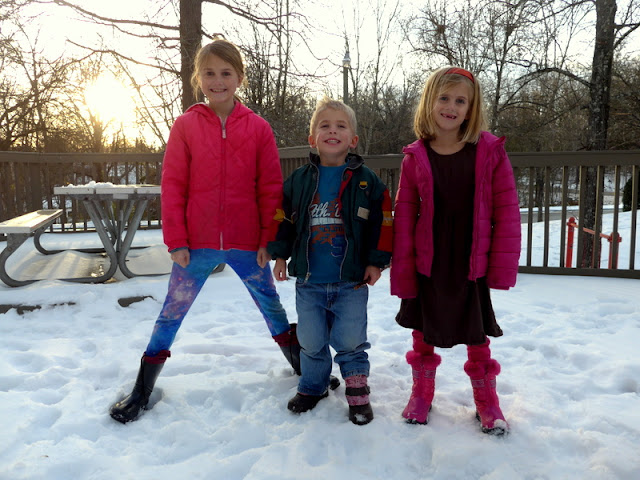 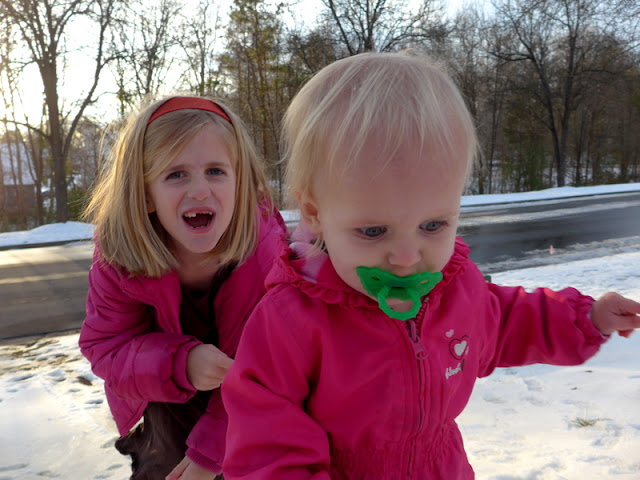 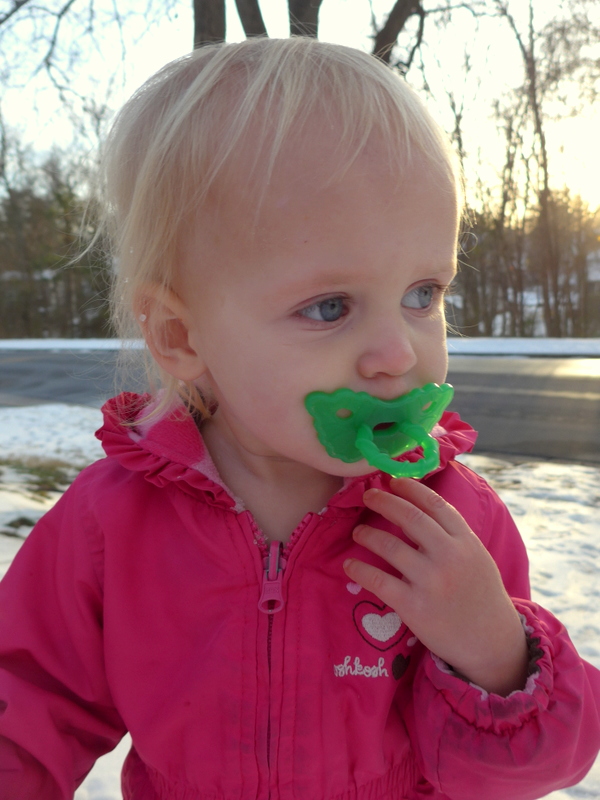 Here's Benjamin chasing us all with a snowball: 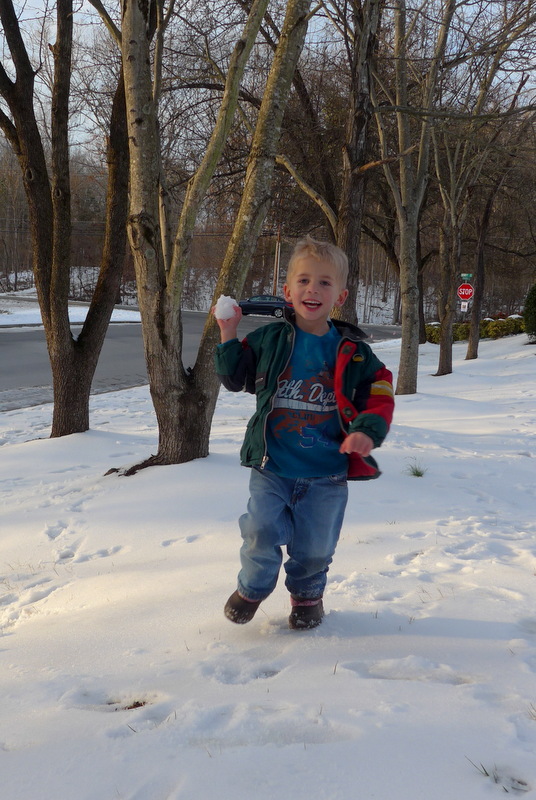 Here's Zoë complaining about getting snow on her hands again (she always wants me to wipe it off): 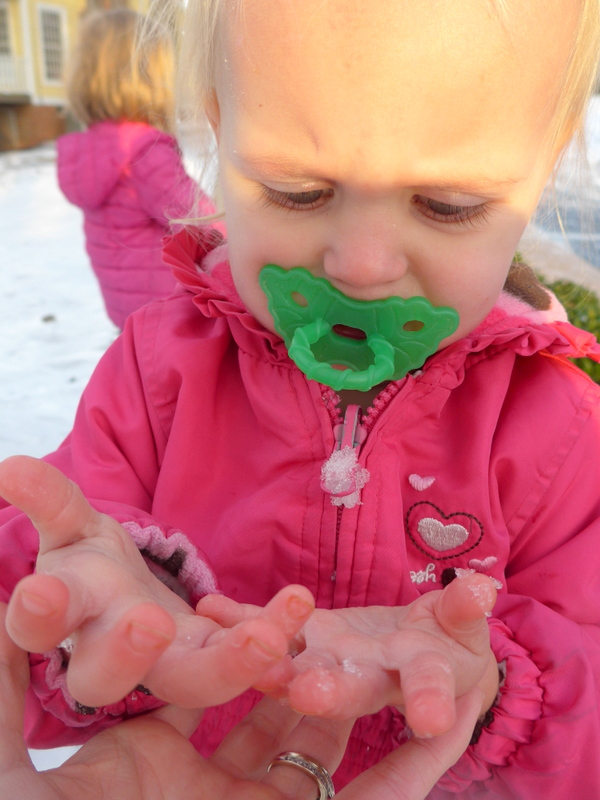 She insisted on walking quite a bit of the way home, which is unusual for her (she usually will walk a few steps and then turn directly in front of me and demand, "Up! Up!"): 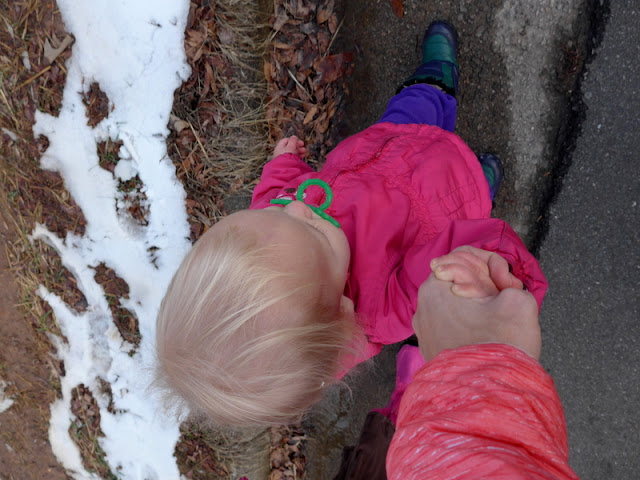 Here we are taking another snowball-throwing break: 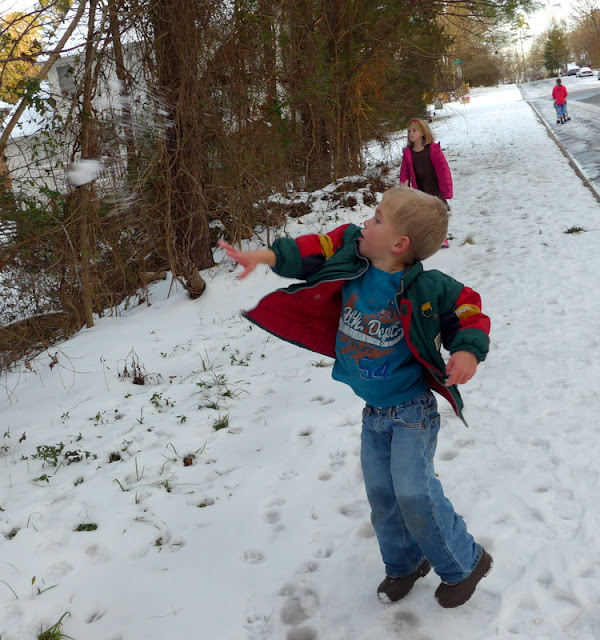 Crying because our hands are cold: 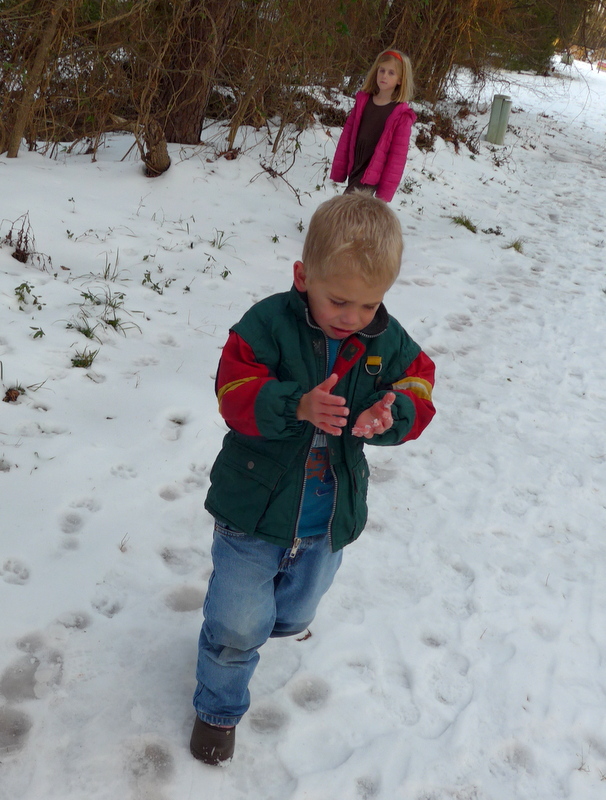 But only as a trick to get close enough to get Mom at point-blank range (little stinker): 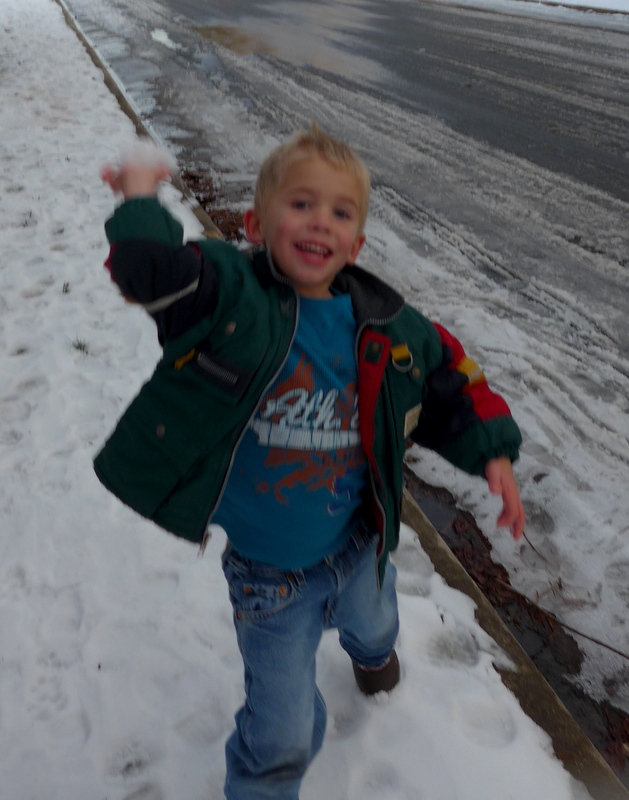 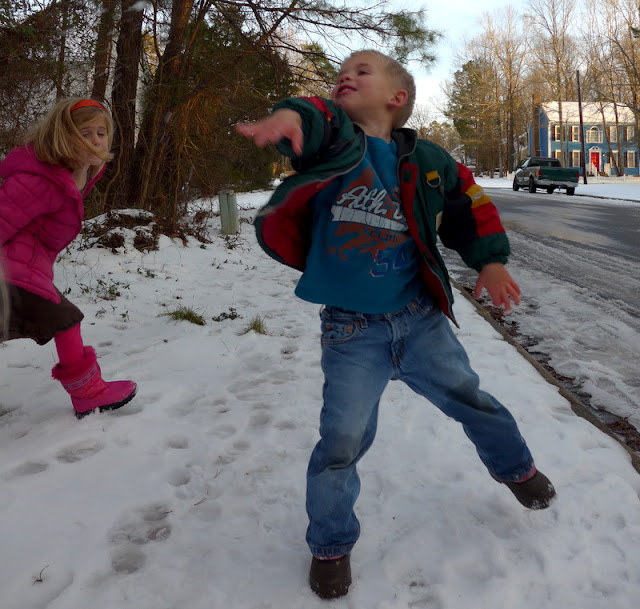 When we got back to the iciest area I tried to convince Zoë to ride in the stroller so that I wouldn't have to carry her and keep my balance. She agreed to sit in it for a few minutes but then started climbing out. I hadn't buckled her in (sometimes I do that and only once have I ever tipped a child out of the stroller and into traffic so I think I'm not doing too bad as a mother) so she started to climb out.

"Sit down," I coaxed, stopping the stroller.

"No," she said through her soother, as she continued wiggling her way out of the stroller.

But she defiantly hopped out of her stroller and the minute her feet hit the ground they went right out from underneath her. She landed flat on her face in a perfect starfish position. Evidently her nose took the brunt of her fall, poor baby. 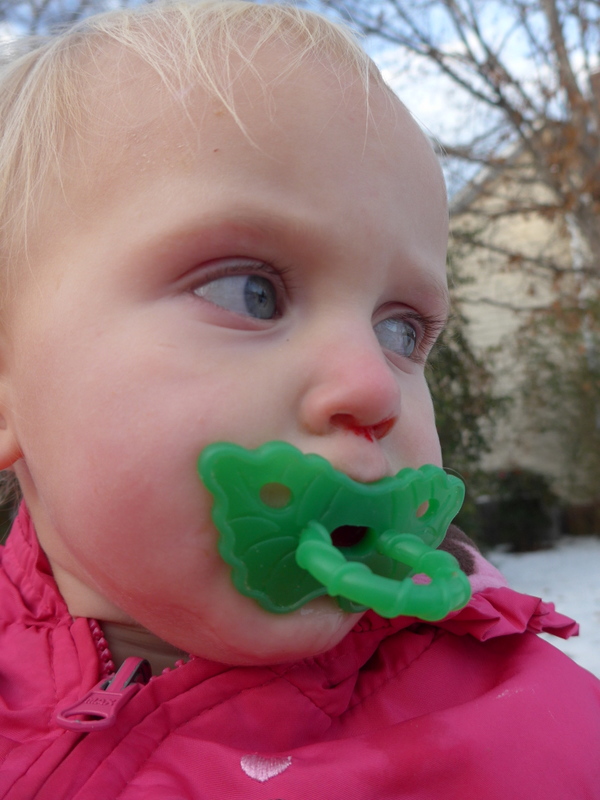 After a brief scream, she located her soother and shoved it back in her mouth and quieted down. Amazing things, these soothers...
Posted by Nancy at 1:05 AM