This morning I went to a lovely brunch with some ladies from church. The invitation was a little spur-of-the-moment, but I don't think it could have come at a better time. Benjamin had his special preschool day, which he attends once per month, and I had his teacher's (Annie's) little boy in his place. It was nice to get to visit while the little ones played. When preschool was over I went to drop off E and pick up Benjamin and who should walk down the street but E's older brothers.

It was such a glorious sunshiny day that we decided to go hiking "to the purple slide park."  Now that their early release time is, like, noon we have plenty of time for such adventures. 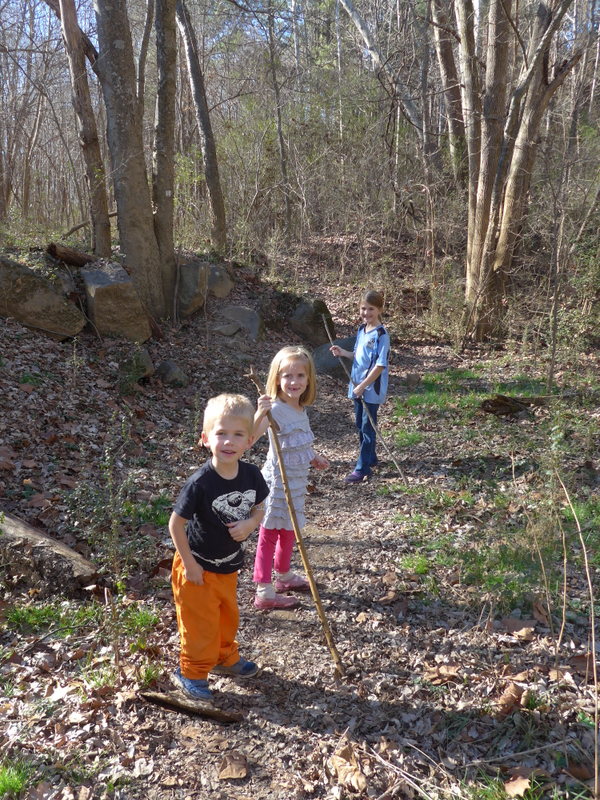 Here's Zoë in the hiking backpack. She didn't fuss at all while I was carrying her (which Andrew thought was unfair because that's all she did while he was carrying her at the rally on Saturday): 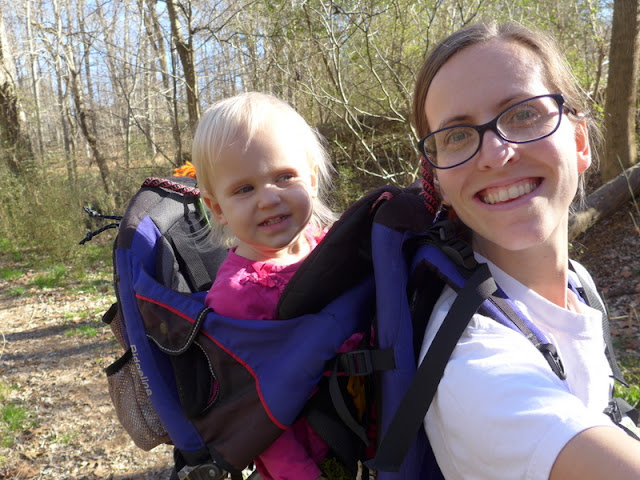 I suppose that it's less of a hike and more of a walk along the river, but it was a rather muddy walk and involved stream-hopping and rock-scrambling so my children are happy to call it a hike. 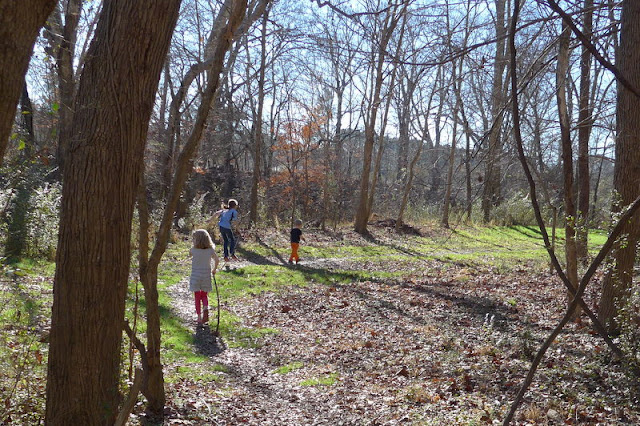 Here's Miriam at the top of some rocks we had to climb over: 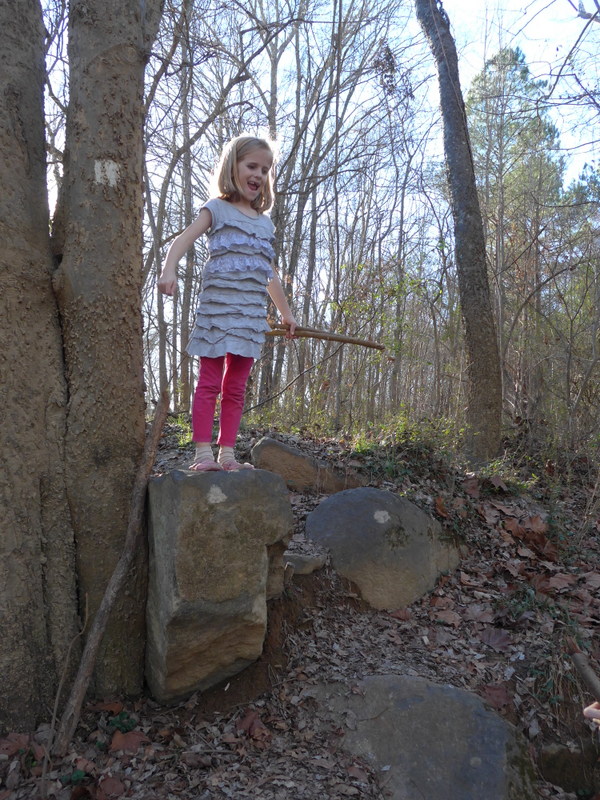 I believe Benjamin is trying to show off his bandaid in this picture (or his "ow" as Zoë would say): 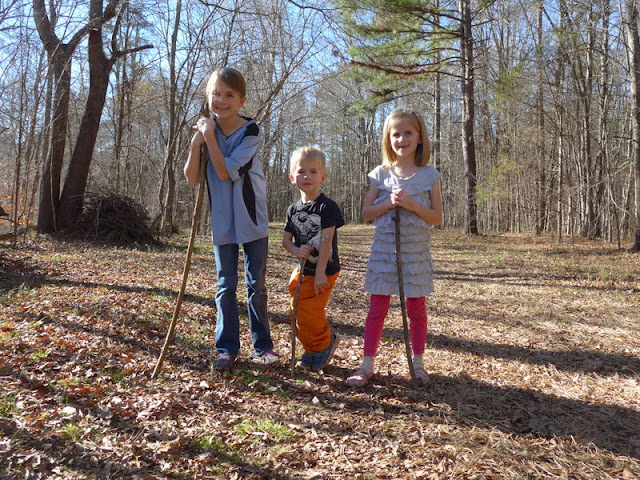 The trail spit us out at the park where we enjoyed playing for a while: 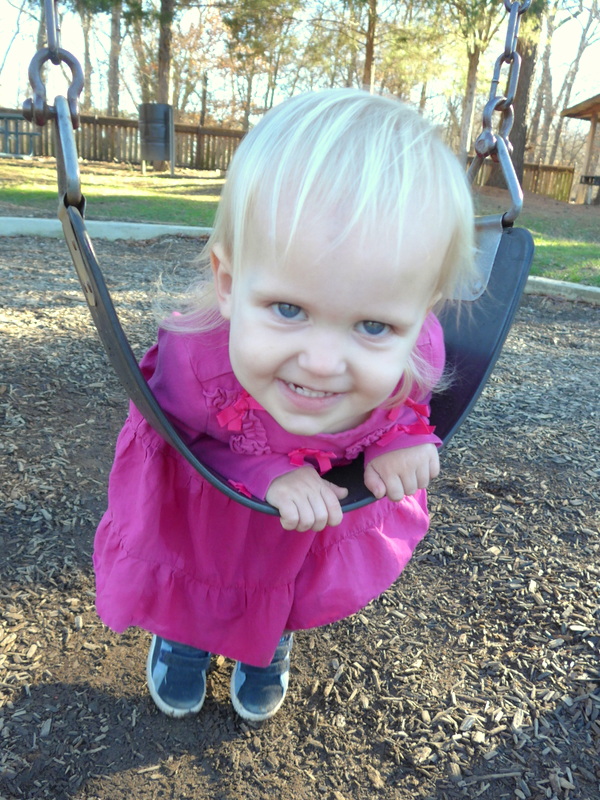 As I watched this little girl running around the field, screaming with joy, her hair a sunshine-soaked halo, I got all choked up. How lucky, I thought, before correcting myself because it isn't really luck. How fortunate I am to be with her today. How blessed I am to be her mother, to be their mother, to have this carefree afternoon with them: hiking, chasing, laughing, swinging, sliding. I wouldn't trade motherhood for anything in the world. I don't want to miss one minute of their growing up years because it really is going far too quickly. 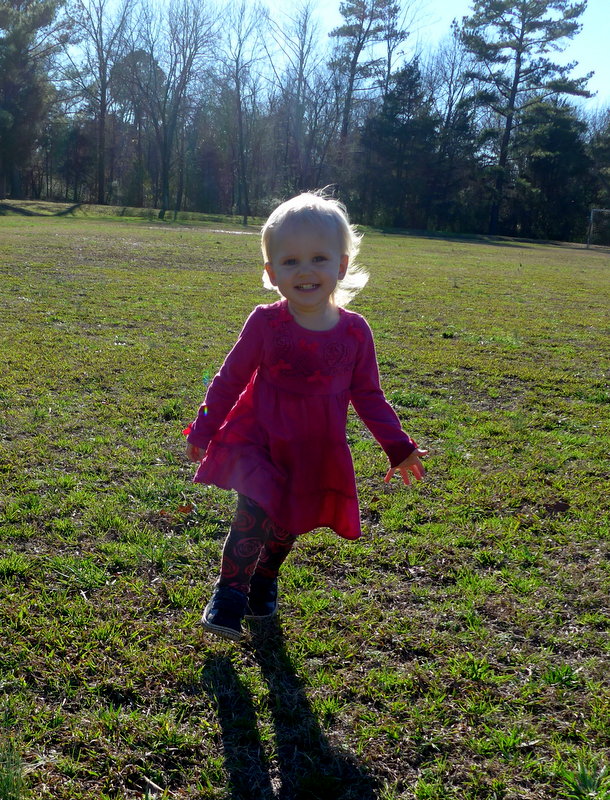 These little people fill my life with so much joy: 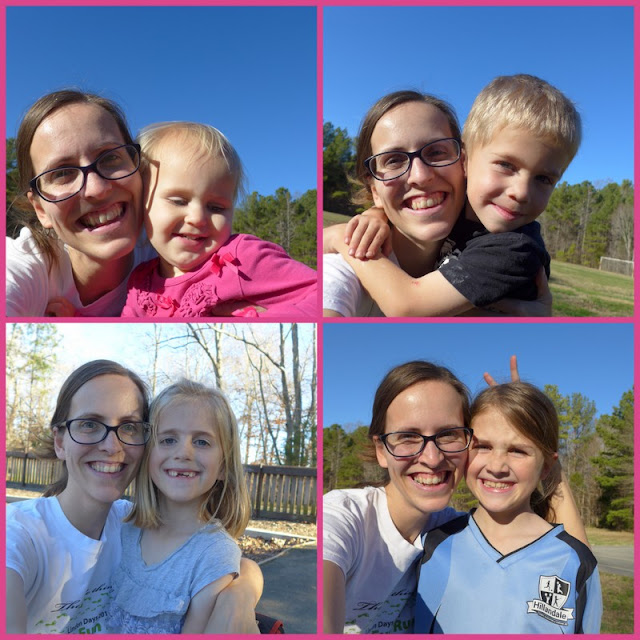 I got all choked up (again) while I was making dinner this evening. I was just slicing up a tomato when I started thinking about how fortunate I was to be serving my family this way. There I was, standing in my own kitchen, making a healthy meal for my children who were busy practicing the piano, playing outside, and reading. I couldn't imagine exchanging this scenario for a different one. I couldn't think of any better place to be.

I'm a self-avowed feminist (I guess that's out of the bag now that you all know I went to the rally on Saturday) and these are the thoughts that I was having yesterday. And I don't feel conflicted about it at all because, for me, feminism and motherhood fit hand in hand easily enough.

I've begun reading Fahrenheit 451, which I somehow managed to escape high school without ever reading. In the introduction to the 60th anniversary edition, Neil Gaiman says, "If someone tells you what a story is about, they are probably right. If someone tells you that is all the story is about, they are very definitely wrong." When I read that I was like, "Yes!" Somehow that is what I need to explain to people—this march meant so many different things to so many different people. To say the march was only about abortion (as many people have tried to tell me) is "very definitely wrong." For me, it wasn't about abortion at all. It was about so many other things—good things. 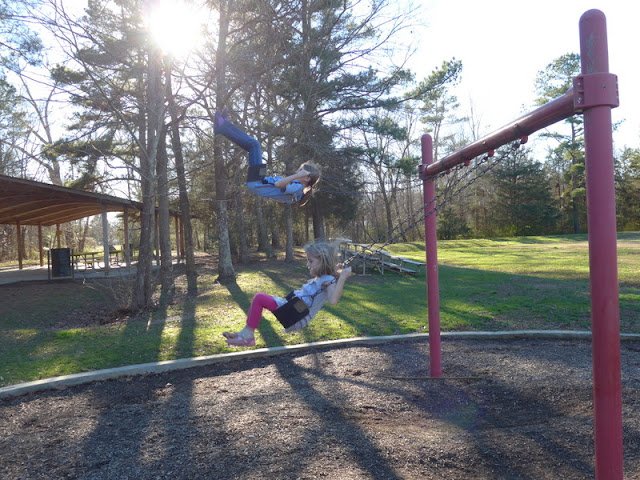 And here's my sweet boy swinging—with no hands: 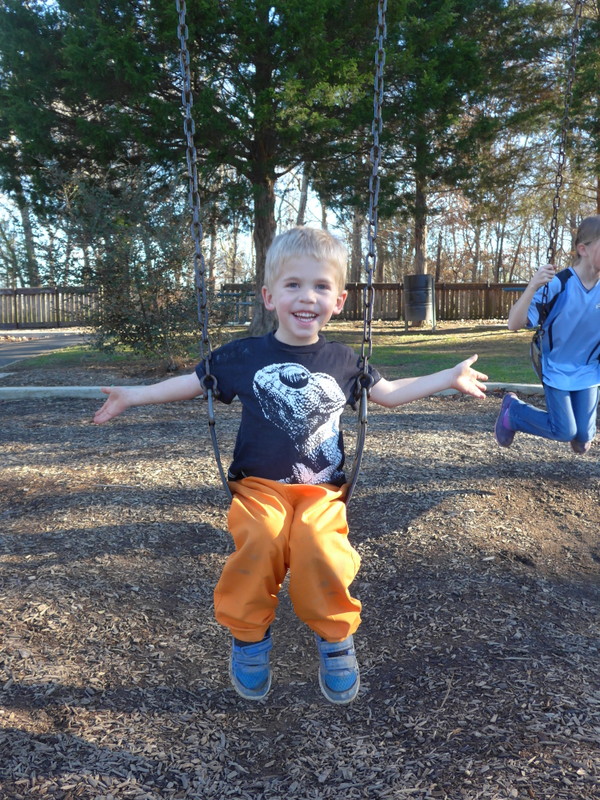 And here are the kids sliding down the purple slide (for which the park is known (at least at our house because I'm sure this park has an official name)): 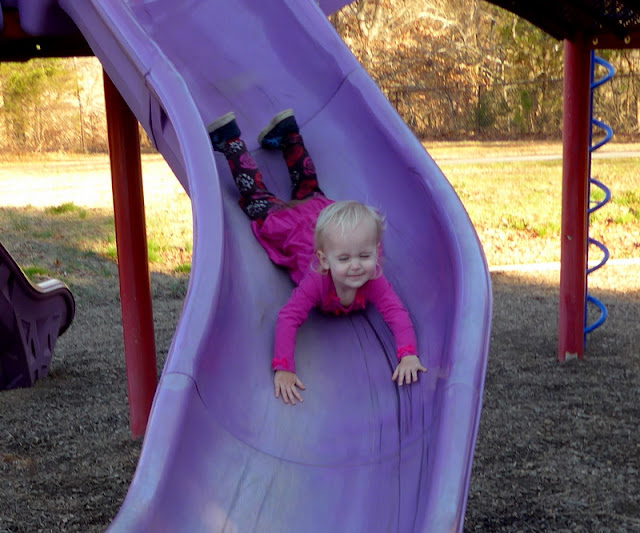 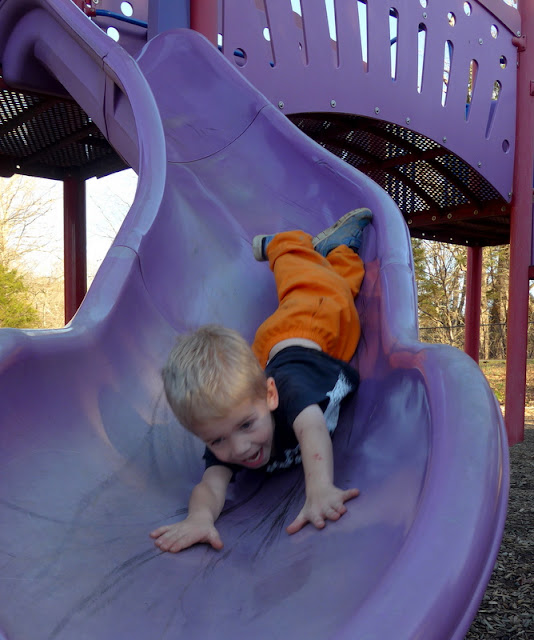 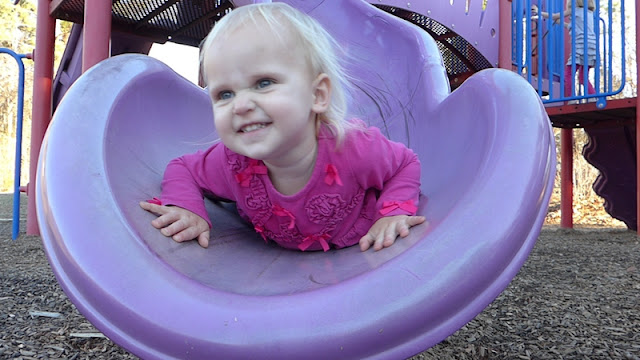 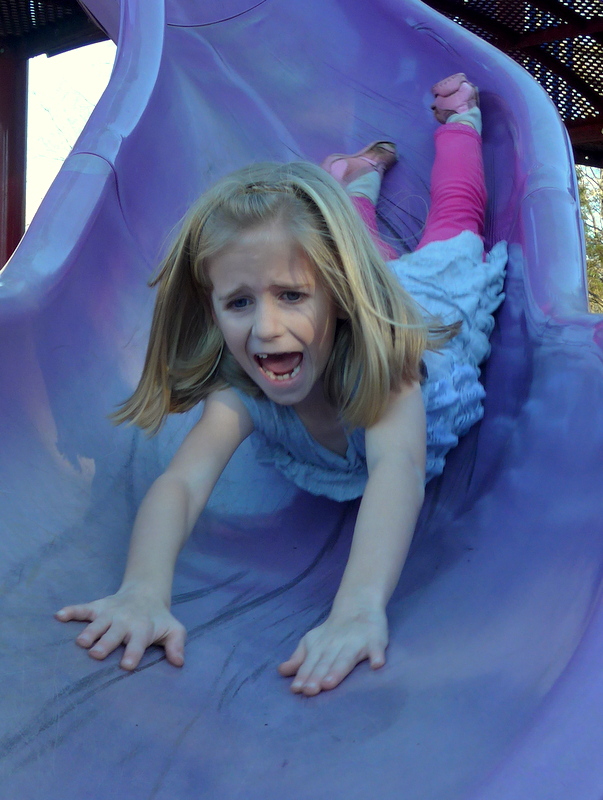 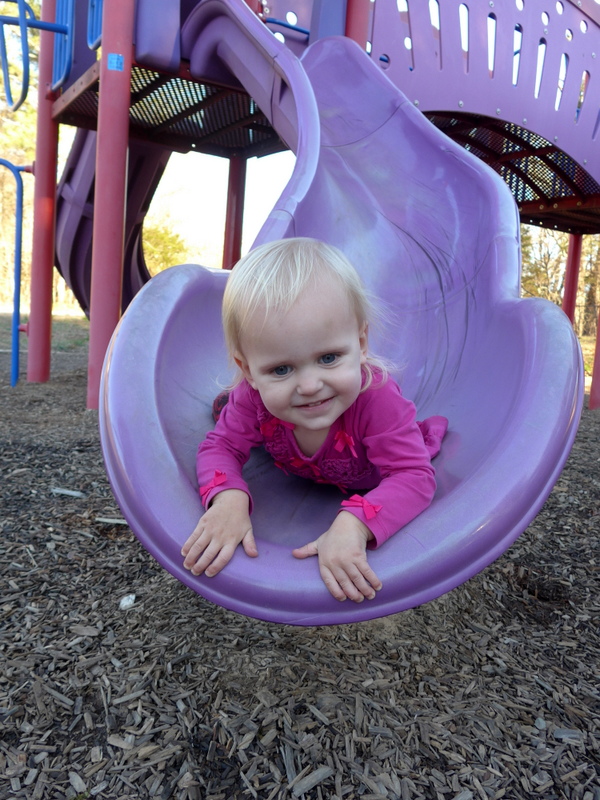 Rachel found that she's getting too tall for slides to be fun. Instead of zipping around the bend she slowly scooches down. It's a lot less fun for her to slide these days—growing up isn't all it's cracked up to be—but I think she had fun helping Zoë at the top.

When it was time to go we huddled up for a selfie. Zoë wouldn't cooperate so only her ear is present... 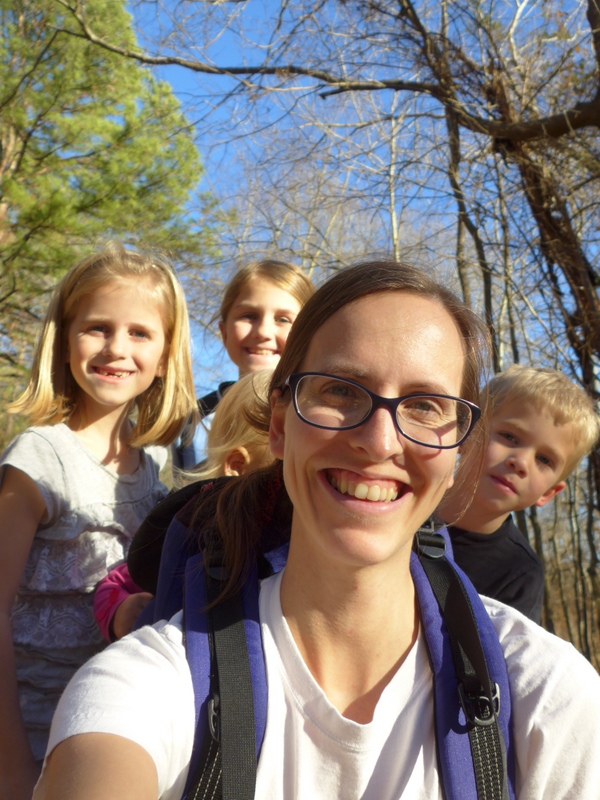 And then we hiked home to get down to more serious after school activities (like the piano practicing and reading I mentioned earlier). Here are the kids jumping over a little stream: 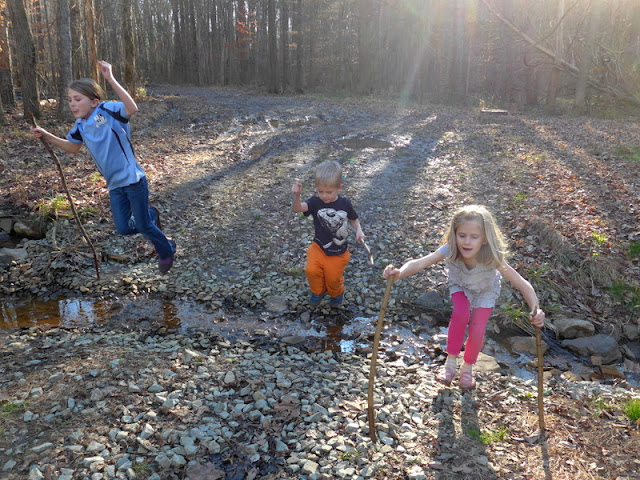 And here they are crossing a different stream in our path: 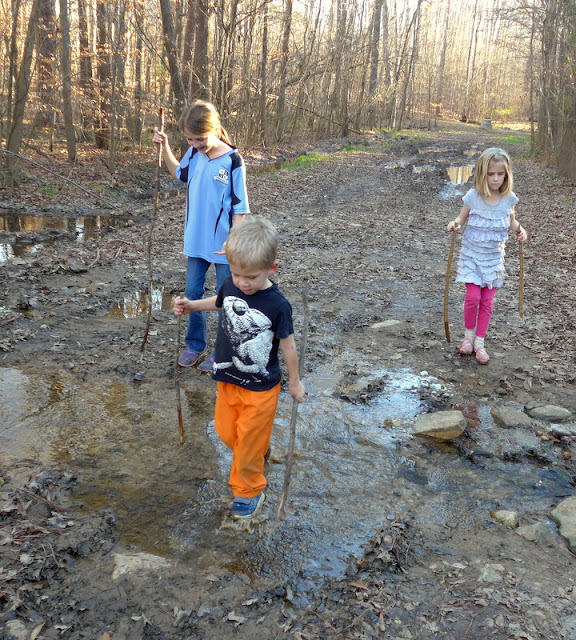 They all crossed it in different ways. Benjamin sloshed right through, Miriam hopped from rock to rock, and Rachel made a gigantic leap across. 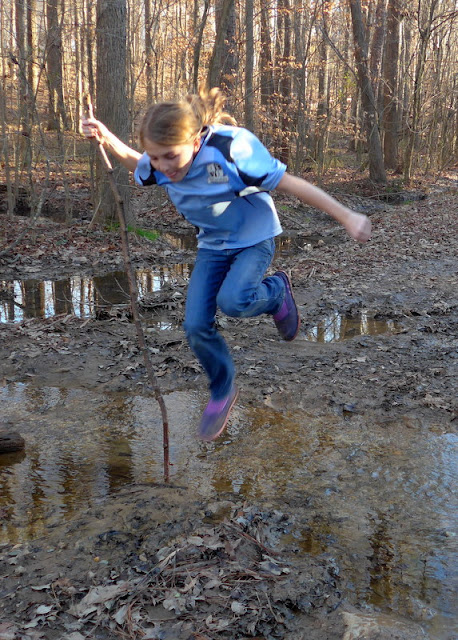 It was so nice to have a carefree afternoon with these kids. 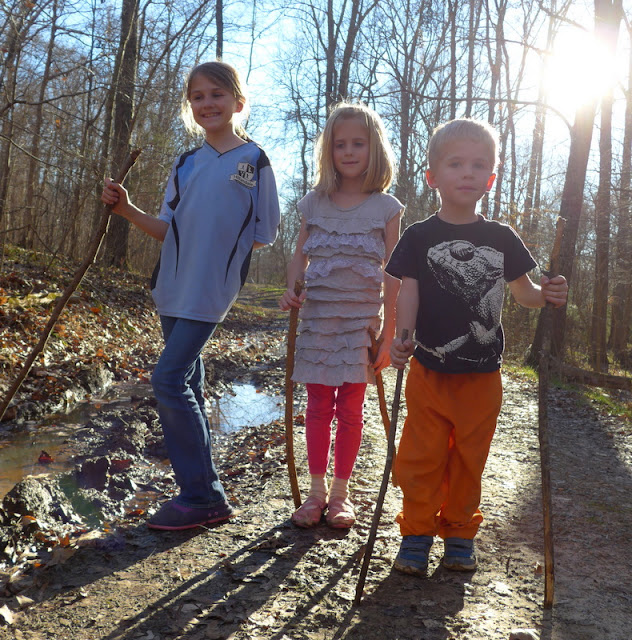 Of course, you should know that later in the evening while I was loading the dishwasher (Andrew and Rachel had left for the church and Miriam was practicing the piano and Zoë and Benjamin were "finishing" their dinner) Benjamin plunged both hands into a 3 lbs. container of sour cream and was lathering it all over his body. And he somehow managed to get poop (human or dog?) inside his croc while he was playing outside (I am pretty sure it's his own poop. My theory: he did a little ball of poop in his underwear (evidence: a poop smear) and it fell out of his underwear, rolled down his pant leg, and ended up inside his shoe) and he didn't even notice (?!?!) and smashed it so completely into the bottom of his foot that he ended up tracking poop all over the place.

I know this because as I was cleaning up sour cream from all over the bench at the table I encountered poop on the bench. *gag* So then I had to go exploring to find where the poop came from. There was poop still smeared on the bottom of Benjamin's foot and matching poop in his croc (and a poop smear in his underwear). So now I don't even know how many surfaces in my home his little poop-covered foot has touched!

We washed the poop off his foot and then I plopped both him and Zoë into the tub. As I washed off my children and observed the water turn a murky mud-and-sour-cream hue (they were so filthy) and thought about all the places I had left to check for rogue particles of poop, I thought to myself, "Maybe I would trade this moment of motherhood..." 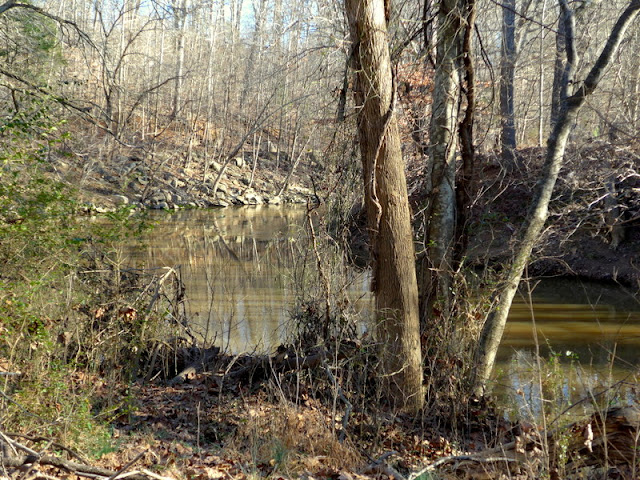 I guess you don't have to enjoy every moment of motherhood to enjoy being a mother.
Posted by Nancy at 11:32 PM