They're bright orange (the adults are really green—the red-spotted part is because they keep their red spots, not because of their overall colouring) so you'd think we'd spot them more often but apparently we only spot them on rainy spring days every few years or so. 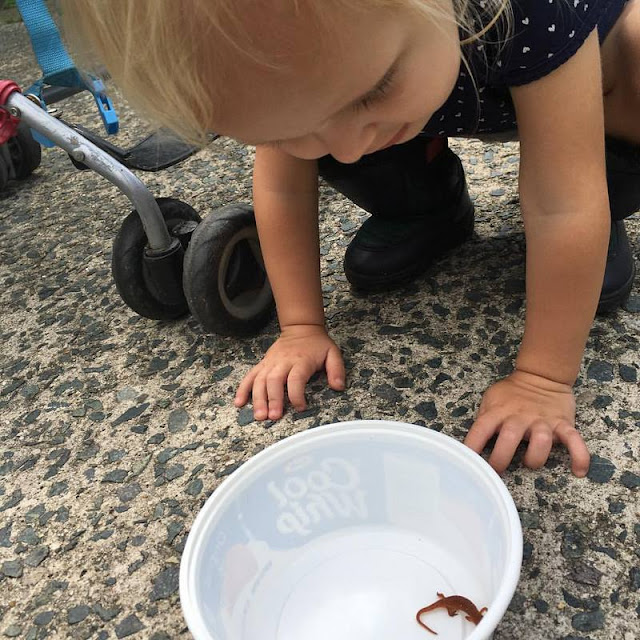 Our neighbour said she cracked up when she saw Zoë this morning because she was wearing a t-shirt, underwear, boots—and nothing else. It's the easiest way to go while potty training, though (which I must take a minute to say continues going well—she had one accident today (#2 again; got to convince her not to hide for that part) but made it to the potty for every pee, including at the school (where we volunteered today) and at the church (for a lovely musical fireside)).

Benjamin was far more excited about this find than he's letting on in this picture: 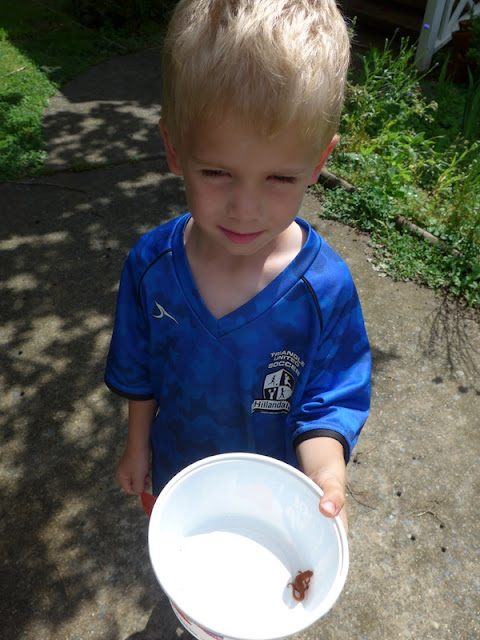 He started calling it "Daylight Lizard," or "Daylight" for short and asked if he could take it to school. I texted Miriam's teacher to see if that would be alright (we were covering her class for a teacher appreciation luncheon) and she texted back to say that she signed him up for a show-and-tell slot and he just about died of joy. 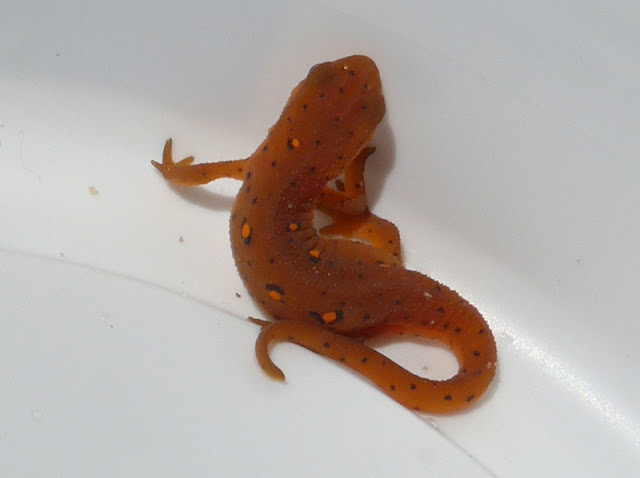 We did our best to make its temporary home more comfortable by adding some soil, a couple of leaves, and some itty-bitty earthworms for it to potentially hunt (we read that's something it might find tasty).

I had a hard time getting a good picture of its face. It was a little bit terrified by the camera and kept running away. I don't know why... 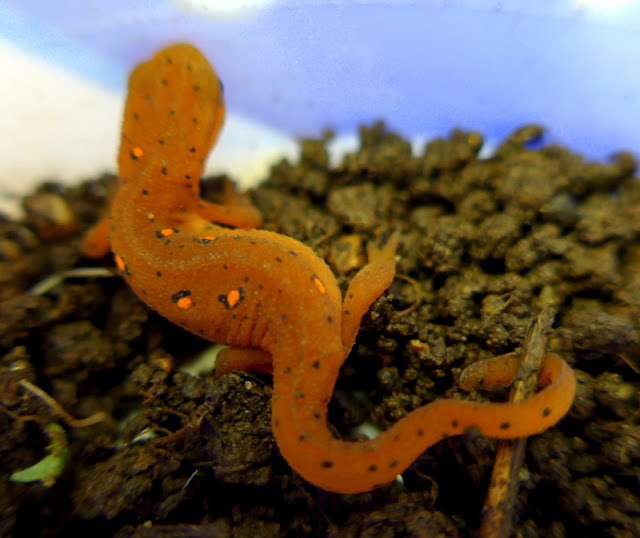 ...but it could have something to do with the fact that the camera is a big, hulking metallic box and this little eft is tiny. Like, he's maybe an inch and a half long. 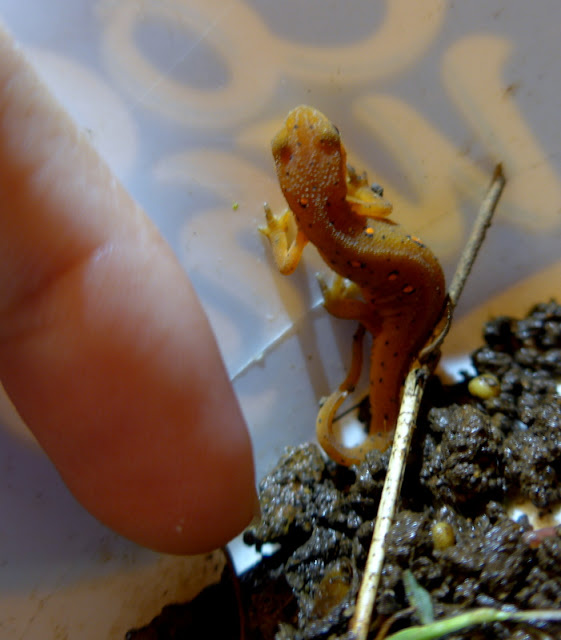 Benjamin was so proud to stand up in front of the class and tell them all about Daylight. The class listened attentively and asked a lot of questions and were all so excited to get a peek. They've been learning about lifecycles (they are "raising" butterflies and mealworms right now and also have a ladybug incubator full of ladybug larvae in their classroom) so we talked about how a newt starts out as an egg and then hatches into a tadpole of sorts before starting a "terrestrial larval stage" as an eft and then return to the water as amphibious adults (though apparently some skip the terrestrial stage altogether and end up retaining their gills as adults—crazy). 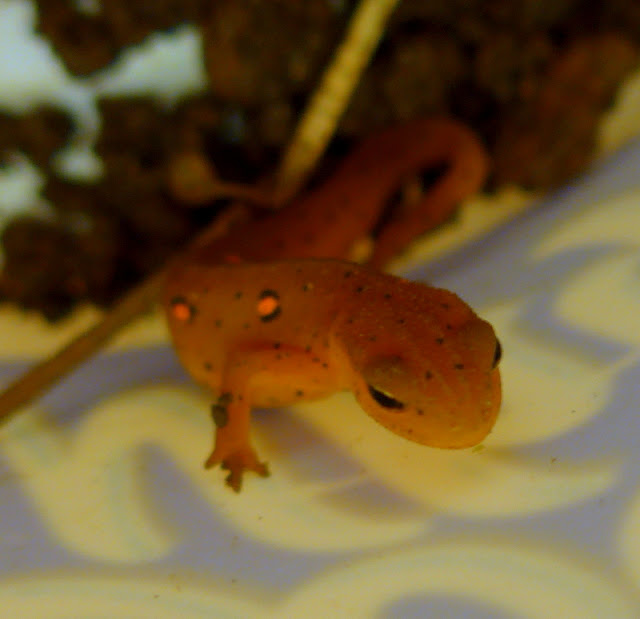 I don't know how Benjamin will feel about life when I make him release Daylight tomorrow, but considering we've lost Daylight twice already—and the whole Cool Whip container, too—like, poof!—maybe he'll understand that Daylight's best chances of survival are in the great outdoors, not the wilds of our house. 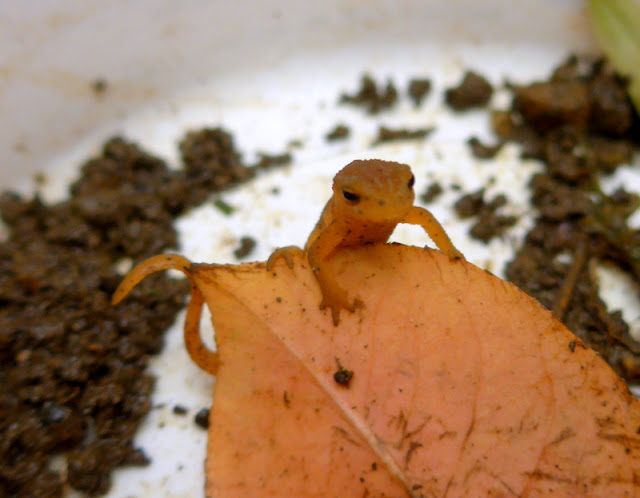