Andrew spent the day on campus—writing, of course. The kids spent the morning playing outside, which was fine for the most part, but it became clear that we'd have to do something to continue enjoying each other's company. The kids spent all day Saturday and Sunday pushing each other's buttons. It was a miracle they were playing nicely together at all, but I knew it wouldn't last.

I had visions of taking the kids to the zoo or the museum or hiking or camping this weekend but, uh, that was all before The Toe. Maybe I'm a wimp but all of a sudden this didn't feel like prime time to be walking around at the zoo all day (plus Andrew decided to go to campus...perhaps because I'm a wimp).

"You could take them to the pool still," Andrew said. "Just don't get in with them."

Truthfully, that idea stresses me out to no end. I'm a trained lifeguard (or, was...whatever) so you'd think I'd be cool with the idea but, actually, no. Being around water stresses me out 10x more than it does the average person. Putting my kids in the water...without me right there to save them should they need it?! Insanity.

But the children were very nearly ready to eat one another alive, so I decided to brave the pool.


I gave Rachel strict instructions that she was to keep Zoë within arm's reach at all times, and I strapped Benjamin into a puddle jumper even though technically he knows how to swim (he wasn't entirely happy about this arrangement). They did a fairly good job of keeping up with one another at first, which made my personal lifeguarding duty easy, but when Zoë came to hang out by me the kids decided the "stick together" rule was no longer in effect and they started drifting further and further apart from each other, which made scanning the pool slightly more difficult.

I know Rachel and Miriam are old enough to swim on their own (like, I could have dropped them off—on their own—at the public pool I used to work at, for example), but our pool has no dedicated lifeguard so I get a little crazy about keeping tabs on my kids. And Benjamin and Zoë really aren't old enough to be in the pool by themselves.

A neighbour commented to me that it was odd to see me sitting on the sidelines, relaxing, while my kids did their own thing. I was like, "Haha. Yeah." But there was really nothing relaxing about it. The whole time I was like, "There's Rachel, there's Miriam, there's Benjamin. There's Rachel, there's Miriam, there's Benjamin. Must. Not. Let. Anyone. Out. Of. My. Sight. For. One. Second."

We all survived and soon my toe will be healed up enough for me to get into the water (the doctor said to give it two weeks...for the gaping wound to close up a bit...before hopping in the pool).

Here's Zoë doing one of her favourite things: pushing people into the water. 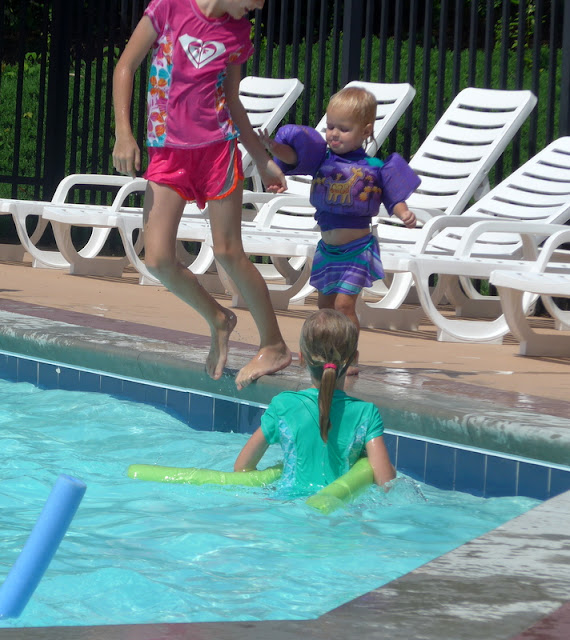 Seriously, the very first day I took the kids to the pool, Miriam was hesitating at the edge of the water and Zoë walked right up to her and gave her a good shove. And she thought it was the best thing ever! All I could think was, "How did my sweet baby think of doing that?!"

When I told Andrew about it he knew the answer immediately.

There is a lot of pushing-people-into-water in that movie. And she loves that movie.

So, you've been duly warned: Don't stand too close to the water when Zoë is around.

Here's Benjamin paddling around with rather melodramatic kicks: 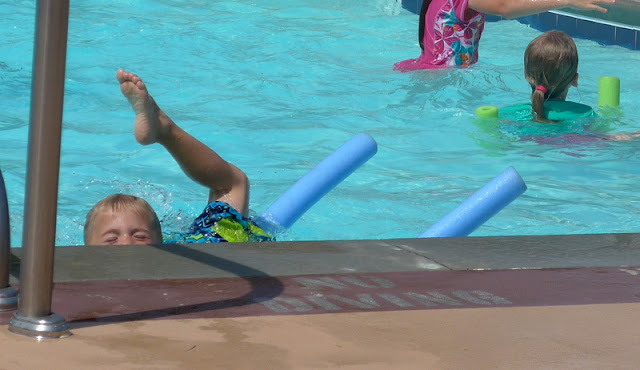 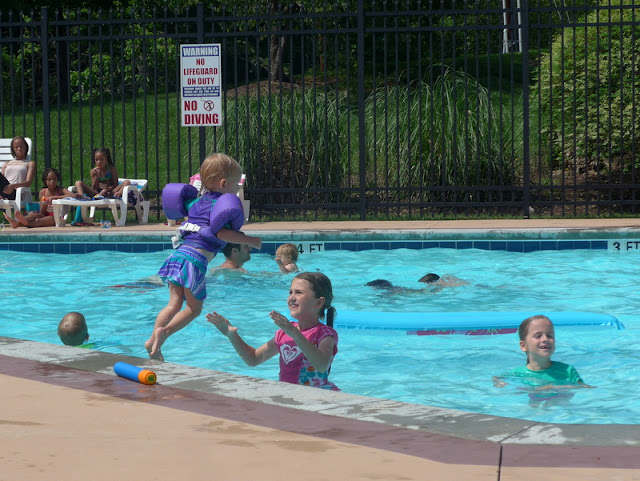 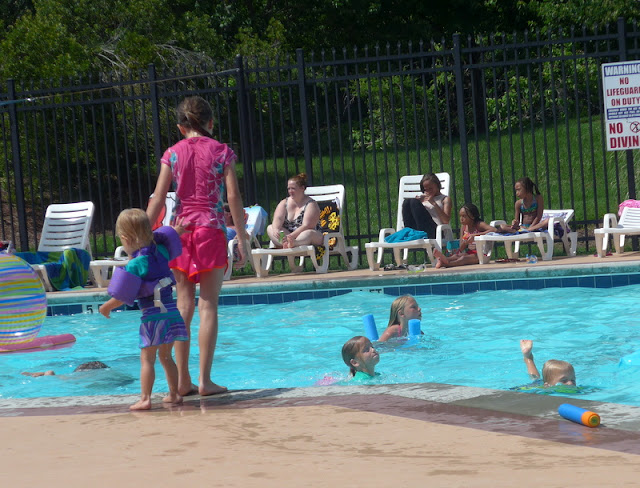 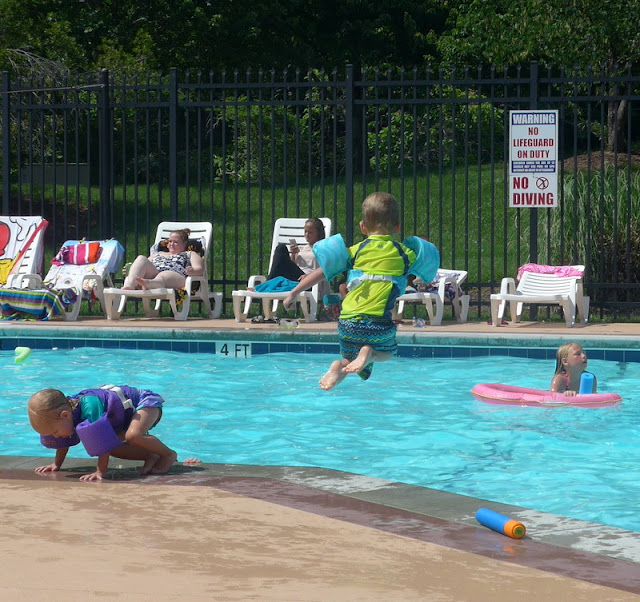 Here are some happy, not-fighting children: 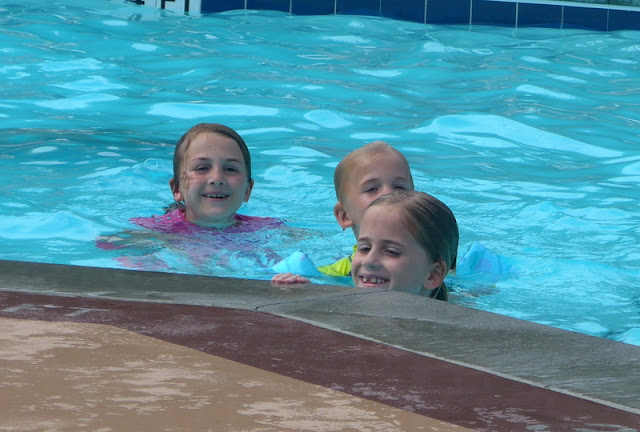 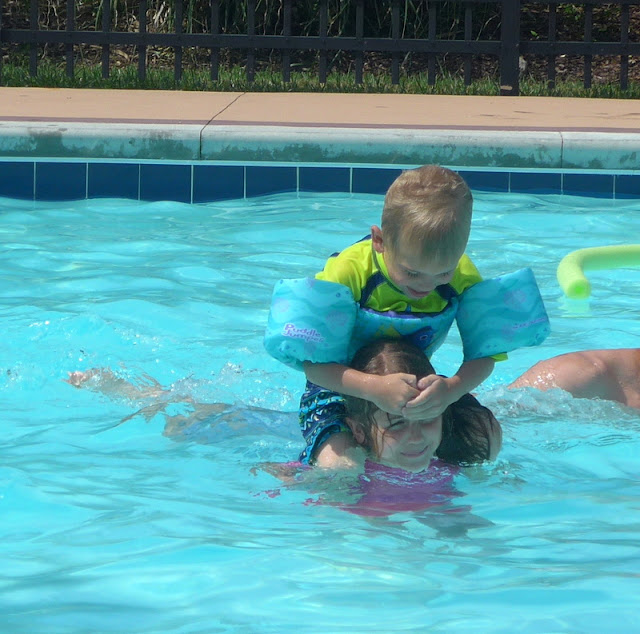 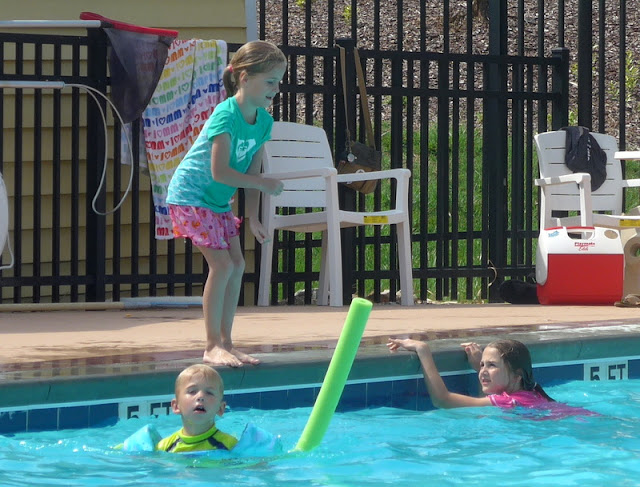 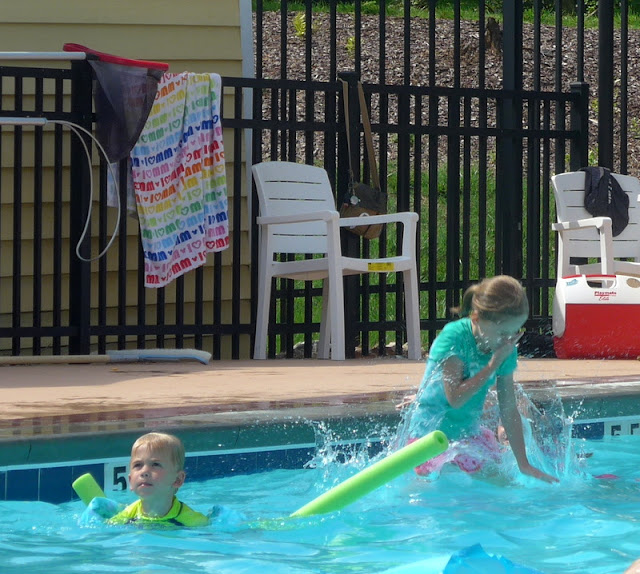 Zoë really wanted me to come into the pool, but more or less understood that I couldn't (or wouldn't) because of my owie, so she spent quite a lot of time hanging out with me on the deck or by the baby pool. She loves Benjamin's Crocs (and would probably die of happiness if she had a pair of her own) and kept playing with them, which one of our elderly neighbours thought was hilarious. Here's Zoë giving said elderly neighbour the stink eye: 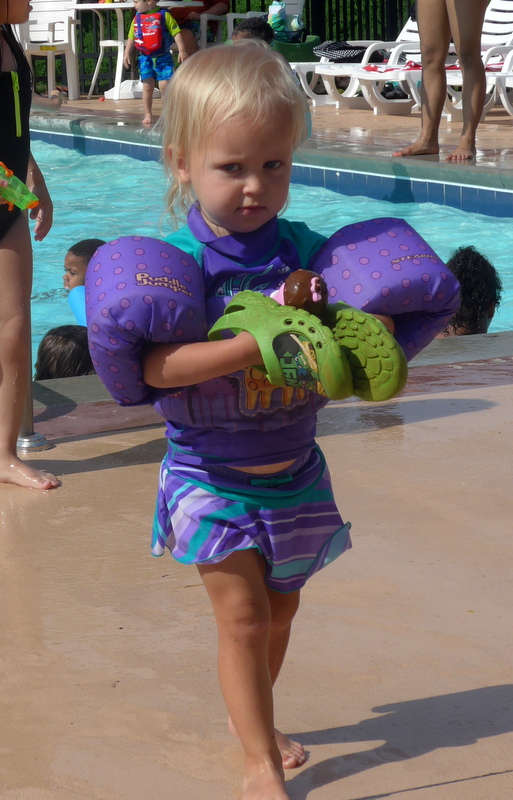 Our neighbour was chuckling at her because (obviously) she was wearing Benjamin's Crocs on her hands but kept trying to carry around her little baby doll as well—which is no laughing matter, thank you very much! It's actually rather difficult. I don't know why that lady kept laughing at her. Sheesh. *stink eye* 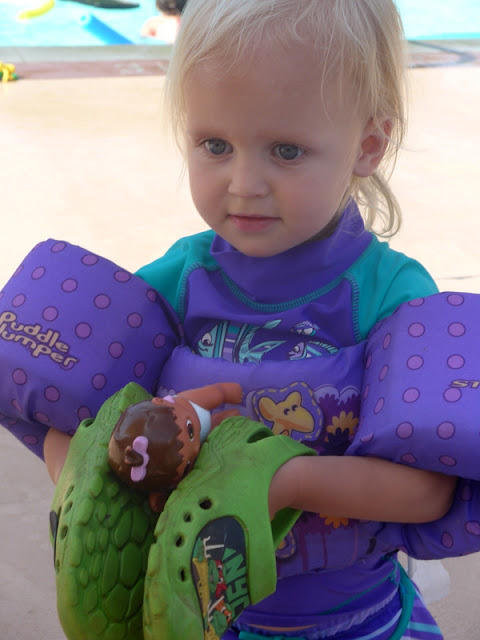 Eventually Zoë decided to hop back into the pool for a little bit before we headed home. By this time Rachel's friend had joined us and the two of them had a great time carting Zoë around. Here they are playing catch with her, which Zoë was absolutely thrilled about. 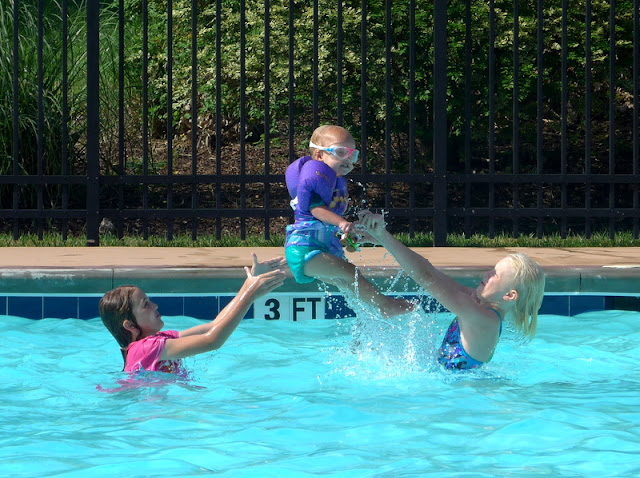 She loves flying and has started begging to be tossed around at the pool every time she sees a parent toss a child. "Oh, fly!" she'll point out. Then the begging will commence. "I fly? I fly? I fly? Momma—I fly?"

So far I've been a "mean mom" and have told her no. But I also told her that Daddy makes kids fly at the pool, so she's started trying to convince him to come to the pool with us (something he hasn't yet managed to do (dissertations, I tell ya)).

She was more than happy to get some good flying in today though!

As for me, I'm happy we all survived the pool, and we all survived the long weekend, and there's only two more weeks of school and then we can really let our hair down and spend all our time either fighting with each other or playing at the pool (or, you know, packing).
Posted by Nancy at 12:17 AM